Razer has unveiled the Huntsman V2 keyboard line, which improves an already stellar keyboard in many new ways. With both a full sized keyboard complete with media dials and a tenkeyless option available, players will also have a choice of going with a space-saver or some portability. It’s hard to imagine what some of these keyboard manufacturers will implement into newer technology, but with continuous input from eSports professionals, these companies find new ways to innovate. The Huntsman V2 is quite possibly the best gaming keyboard line on the market as these keyboards need to be experienced to be appreciated.

Razer’s biggest implementation to the Huntsman V2 is the addition of an 8K polling rate known as Hyperpolling. This addition makes the Huntsman V2 the fastest keyboard on the market, currently. This also means much faster inputs so you’re not left behind in competition. With Hyperpolling, this technology allows for latency performance to only be 0.2 milliseconds, unlike the 2-4 milliseconds traditional mechanical keyboards have. Unlike the Viper 8K, which had the possibility of dropping some frame rates due to how it was polled, this will not be an issue with the Huntsman V2 due to its design. Adjusting the performance, the feel and the acoustics were the key driving factors for the Huntsman V2, and the feel is beyond comforting. 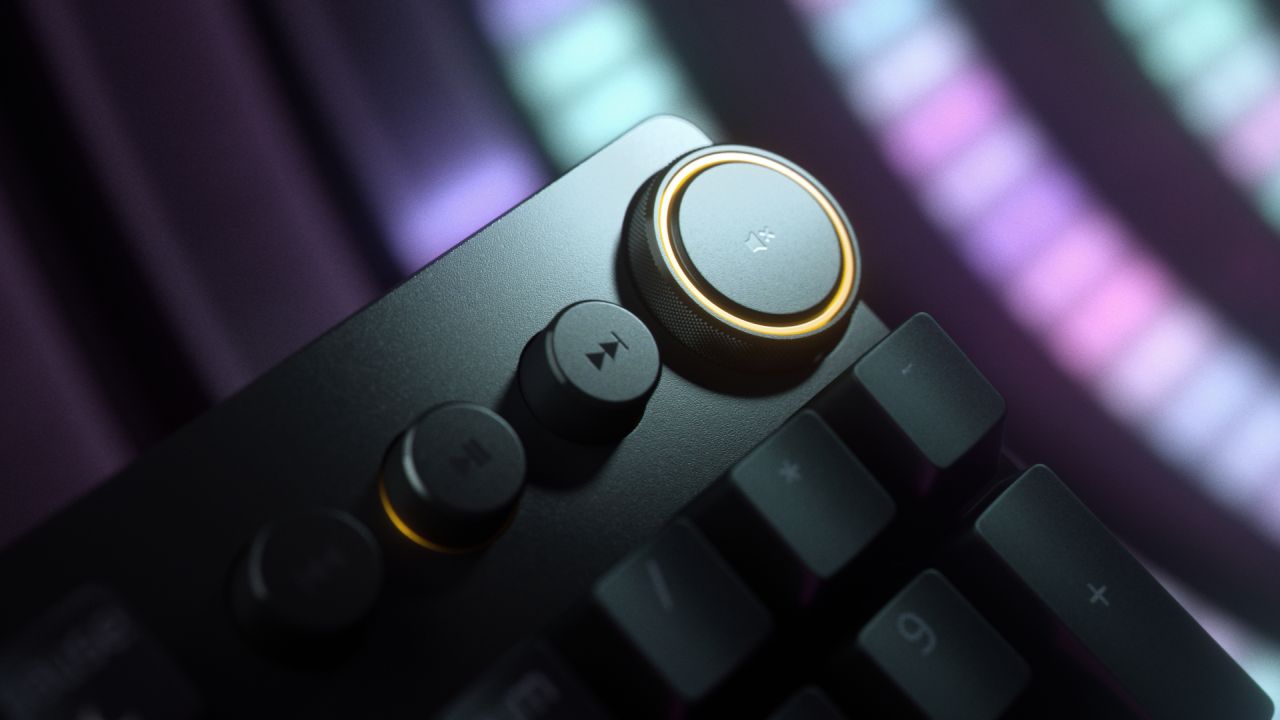 Players do have specific preferences when it comes to the switches and sound that a keyboard makes. While I was more on the Clicky side of things a few years ago, I have gradually moved towards preferring linear or tactile switches. With the Huntsman V2, Razer has added sound dampening foam to reduce the noise of the keyboard while still offering audible feedback. Not only is the input fast on the keyboard thanks to Hyperpolling, but if you’re using this keyboard for typing, its extremely fluid and quick to use. Each keypress is satisfying as the audible feedback is subtle, but also the actuation point on each keypress. There is just enough overall feedback that it feels comfortable to use for daily use and game on with no worries about input delay.

While the pictures may resemble the same keyboard as the original Huntsman, upon pulling out of the box, the looks is much more clean and sleek. The Huntsman V2 is thinner than the original Huntsman options and features an aluminum construction that feels ridiculously durable and maintains a low center of gravity so the keyboard won’t move on you. Razer has also included a leatherette wrist rest with both versions, and it is not required to lock in place like the original Huntsman Elite. 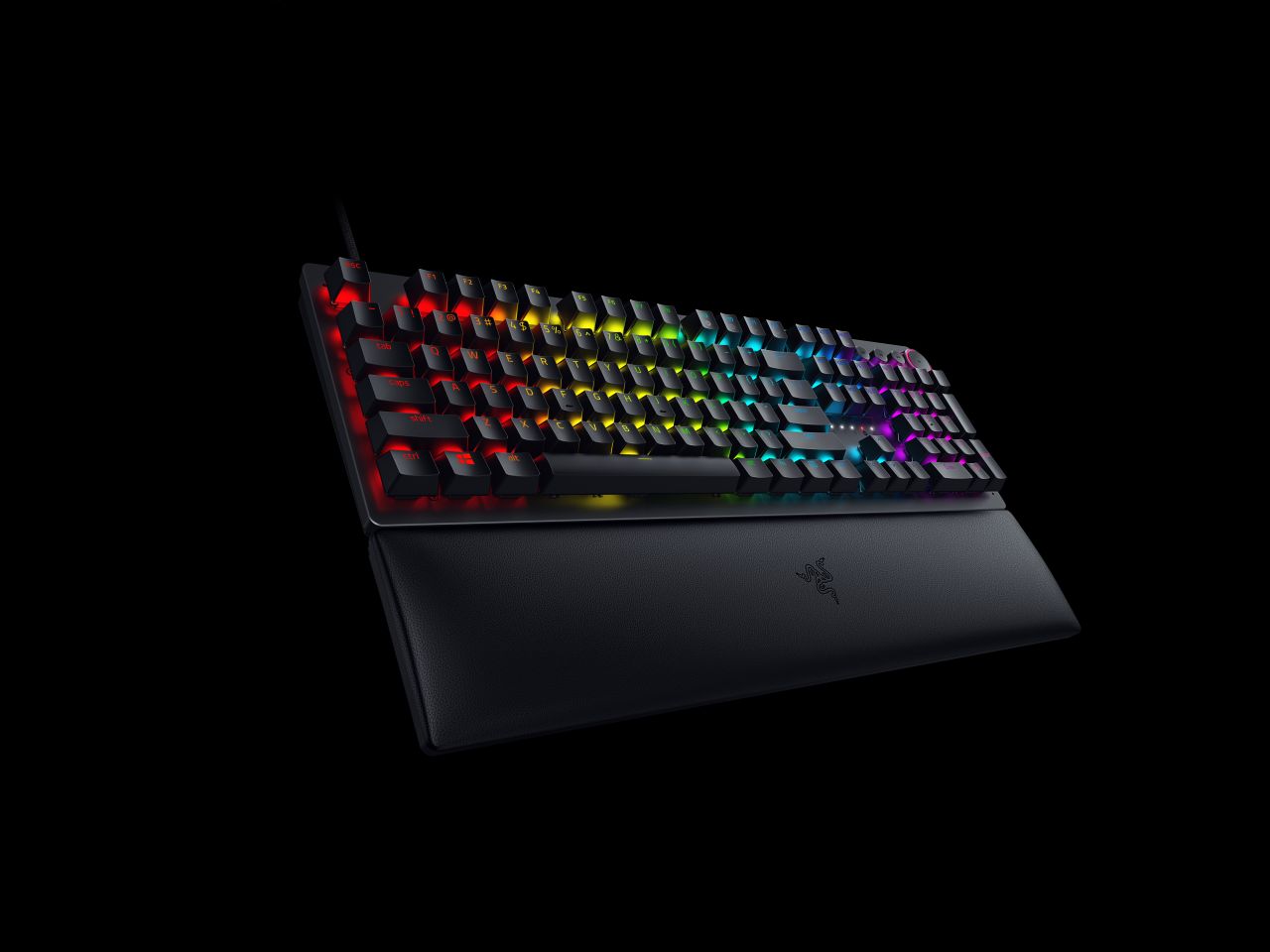 Razer has included its Doubleshot PBT Keycaps that allow for longer durability and offer the calming Razer fonts for each key. The keys are rated at 100 million keystroke lifespan with a properly textured cap to offer just enough grip. The Huntsman V2 will include RGB with up to 16.8 Million colors along with highlighting secondary functions when necessary. What’s gone is the edge lighting the original had, but this isn’t necessarily missed. Thanks to the aluminum construction, the under glow of the RGB lighting reflects off of this and creates an excellent vibe. The lighting isn’t ridiculously vibrant on the Huntsman V2, but the entire keyboard looks excellent in a darkened room. With the full-sized Huntsman V2, the same media dials and buttons are retained from the previous if this is an option you’re interested in. The tenkeyless removes these dials, but adds a nice perk of a detachable USB-C cable that connects underneath the keyboard rather than having the extension out of the top. Players can also expect five hybrid profiles for the keyboard along with N-key rollover, anti-ghosting, on-the-fly macro recording and a gaming mode option.

Premium pricing for a premium keyboard comes with the territory. but Razer makes the Huntsman V2 worth the money. The tenkeyless version starts off at $149.99 for the Purple Clicky Switch version as the Red Linear jumps up ten dollars. The full size version starts at $189.99 for the Purple Clicky and hits $199.99 for the Red Linear. The Red Linear tenkeyless version is the sweet spot unless you need a number pad and the media dials, but for pure performance, the tenkeyless options are hard to pass up at that price. There is not really any difference between the two sizes, so that’s a bit hard to justify a $40 price increase. 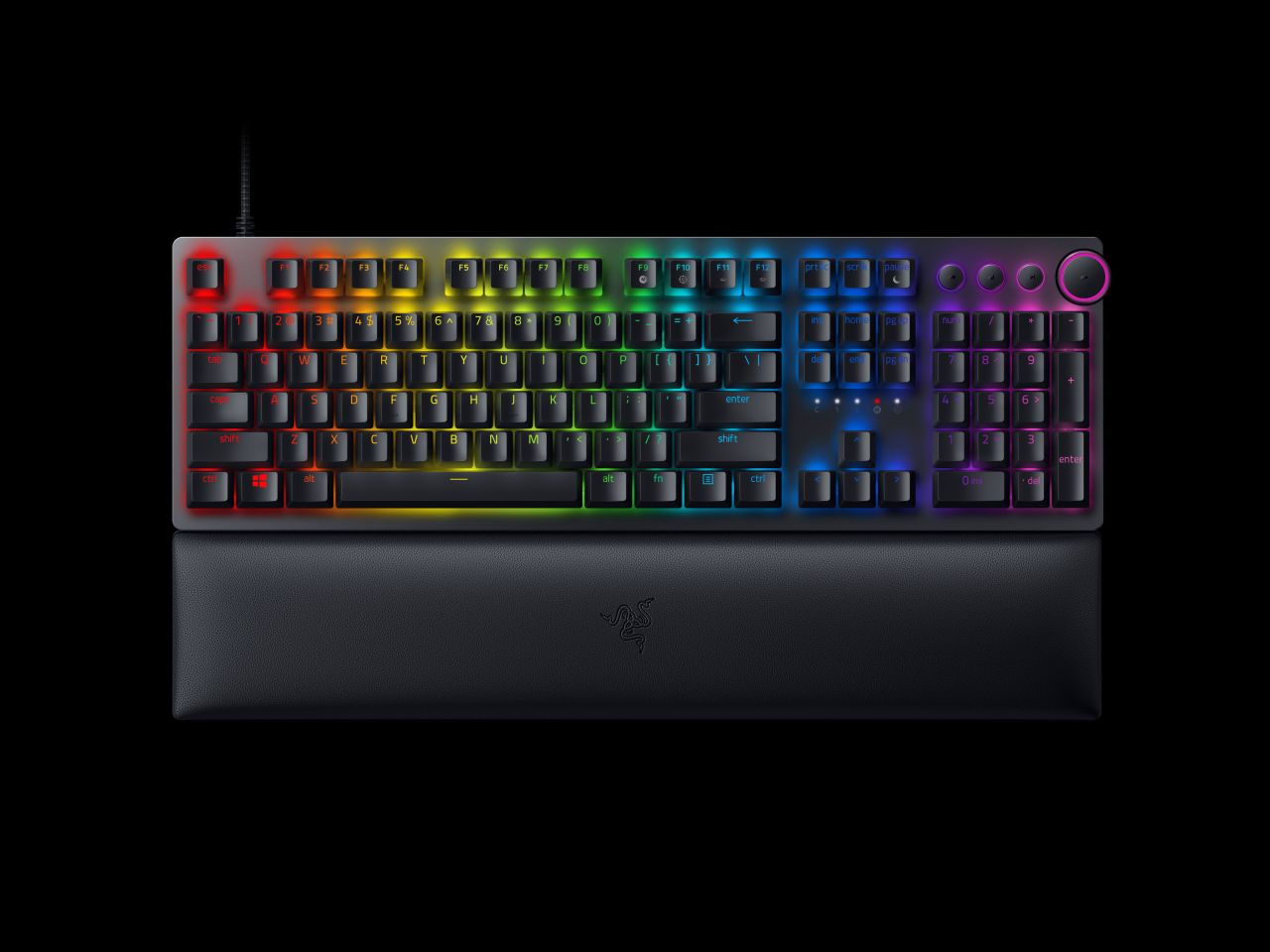 The Huntsman Elite was a go-to keyboard for quite some time, as it was a monster and offered every bit of tech you could imagine for 2018. The Huntsman V2 modernizes every bit of the original versions with a better look and a better feel. The Hyperpolling of the Huntsman V2 certainly provides a boost in shooters due to the quick inputs. Any game that is fast-paced and registers input quickly makes the Huntsman V2 beneficial to those gamers. If you are in the market for a premium keyboard, the Razer Huntsman V2 is the way.