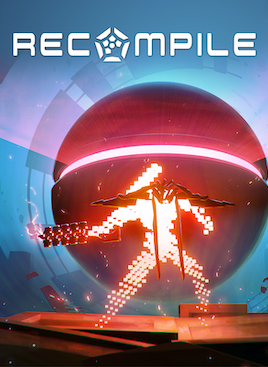 Focusing strongly on a desired visual aesthetic can be a double-edged sword. Sure it can bolster the appeal of a game and maybe even turn it into a genuinely unique experience — at least on the visual side of things — but not if that comes at the cost of disregarding how a game plays. What good is an eye-catching aesthetic if the surroundings aren’t even that enjoyable to traverse? Though it may not have surfaced much in written form over the past couple of years, I’ve had my eye on Recompile for a multitude of reasons. Firstly, its pitch on being a 3D Metroidvania is an easy attraction at a time when most releases are predominantly 2D (or 2.5D if you want to be a touch more charitable). Secondly, the premise of visualizing the inside of an advanced, albeit broken, computer network where an initially-vague reason as to its malfunctioned state, is sought after.

Sure these two inspirations may not be the most inventive of prospects, but whether it was its stark contrast of lighting or even the brow-raising mix of platforming, puzzle-solving atop occasional third-person shooting, you can’t knock Recompile for its hearkening to 3D platforming of yonder age. Clear routes forward requiring more precise and considered sequences of moves to navigate its restricted plots of floating ground above a seeming deathly void. Alongside those brief of spots where said route isn’t as clear as it once was — requiring good old-fashioned reorienting and deduction on what form of traversal will work and what won’t. It’s less a case that developer Phigames’ intentions are lost — obstructed by the plentiful darkness that is its internalized representation of digital space. It’s more a case that Recompile feels like yet another example of the vision coming before the execution. And what we wind up with, sadly, is another case of a game not only shallow in its offering, but at its worst, completely frustrating to even warrant a full journey.

But the disappointing frustration of Recompile is two-fold: the first manifests through its unclear direction on what kind of game it wants to be. Is this a fully-fledged Metroidvania where exploration is rewarded and return visits to previously-inaccessible “worlds” are not only warranted but satisfying to get past? Or is it a platformer that’s attempting to evoke the brightest of moments circa-late 90s/early 2000s when the introduction of three dimensions proved it could actually benefit the genre? The answer appears to be this awkward amalgamation where neither strength is utilized particularly well. Sure there’s spots of jumping — all the while avoiding distant projectile fire from enemies — as there are abilities to discover that as a result open up new areas to traverse. The problem is that its desperate committing to both areas ends up stretching the game so thin its ideas are neither interesting nor complimentary to its supposed aesthetic of this “simulated” abstraction of a computer system. In fact, take away the visuals — the “artistic choice” to deprive players of visibility at times — and the experience would still feel relatively the same. 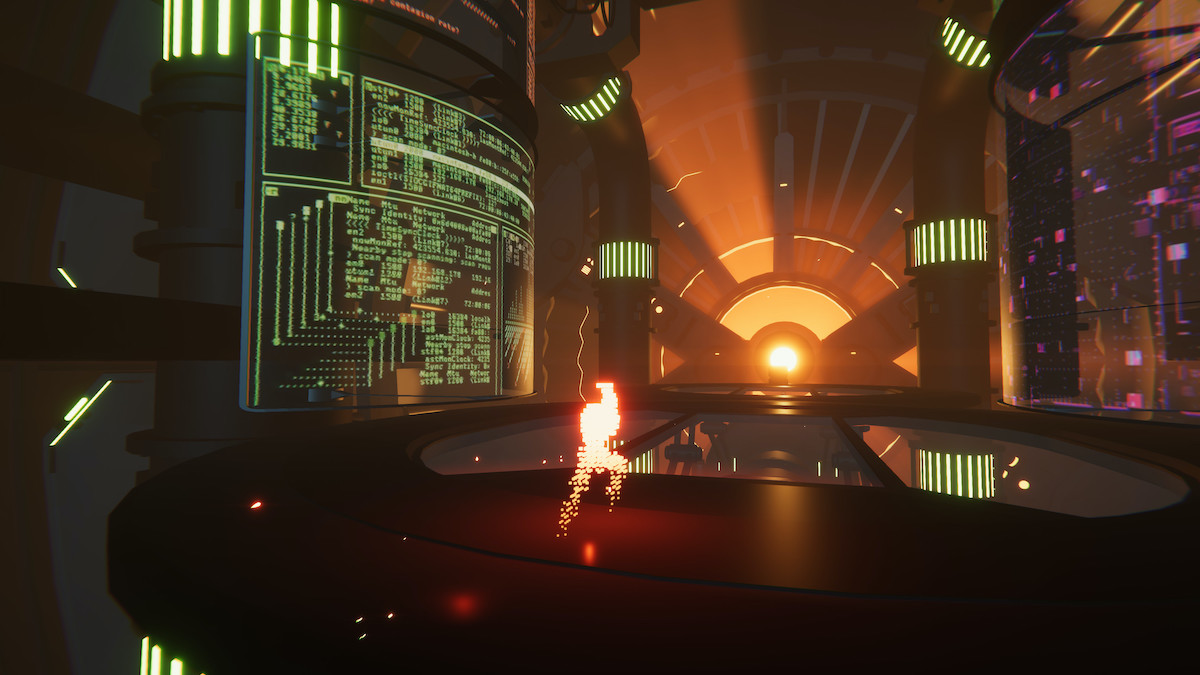 Perhaps the spaciousness, the isolation amid the ruinous void of cyberspace is what the game is going for — a kind of digital Journey if you will — but the basic level design and vagueness of its core progression doesn’t do anywhere near enough to even warrant such a reaction. In fact, the way the game handles progression is the second of Recompile‘s two core failings. For a large chunk of the brief run-time players are required to fix and bring back online four differing environments, of which are meant to symbolize the core components of the in-world computer system. Looked at from a superficial level, the representing of these different components are handled well enough. The red, perilous jumps between what we may associate with lava in the security region of TET are enough to have the game get away with including an obligatory fire-themed stage. Likewise, the winding of green-hued tubes littering the control units of HEX fit perfectly with the implication of everything connected together. The latter example easily one of the few lingering highlights of Recompile. A case where hunting down objectives isn’t so easily labelled — requiring more of a deduction and drawing from nearby landmarks to work out how to get from A to B.

But as satisfying it is to find this manner of level design baked in, it’s equally disappointing to conclude this as an exception to the norm, rather than the norm itself. Because Recompile isn’t as explorative or unshackled from obligatory linearity, as its premise may have you believe. You might go in under the innocent assumption that you can tackle worlds in any order you like, but the fact that some — like the blue-themed — require abilities found in another sector. Or worse, abilities stationed at the mid-point/end-point of a given area feel entirely optional or irrelevant to the main objective. It’s a confusing sight and one that only shines a light on Recompile‘s indecisive nature on whether it requires players to act in linear or non-linear fashion. Again, some platforming segments like the introductory phase of the sector are pleasant enough, but even these moments are dampened somewhat by the occasional shoehorning-in of its shooting mechanics. Static and even floating hostiles that require your character to be nimble enough, but whose perilously-high, perilously-small platforms feel anything but complimentary to such a style of play. 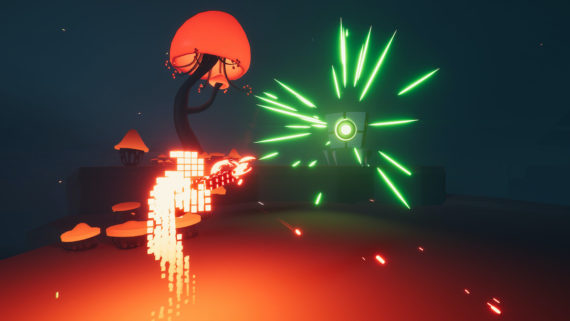 There’s even a hacking ability introduced around the half-way mark, wherein the game lends its titular namesake. Again, on the surface, the intention seems reasonable enough and as we’ve seen in the past puzzles revolving around the notion of tinkering with logic and the parameters of certain functions can create something brilliant. But Recompile is nowhere near matching that lofty ambition, instead providing the simplest of gameplay — requiring you to manipulate a series of nodes and loops to enable/disable particular devices. These mechanics don’t add to the experience, other than flipping up a menu interface now and again. Much like the different modes of fire you unlock for your gun — starting with a basic semi-auto, added to later with variants such as  SMG-esque rapid-fire and shotgun blasts alike — these additions aren’t complimented with a similar increase in stakes or variety of tasks put before the player that demand a shake-up in what tools or abilities are used.

To remark that these unappealing attempts at introducing both combat and puzzle-solving aren’t even the most egregious moments of Recompile should say a lot about its remaining key component. The one area that seems to spring up at a high and alarmingly-frustrating rate and finds its peak (if you can call it that) reach around half-way. Upon entering another region of the game whereupon the only means of progression are relegated in most parts to a series of small platforms. The problem is that combined with issues pertaining to depth perception, the continuing absence of light as well as an overdrawn stretch of time to respawn should you fail the jump, Recompile in these instances goes from an uninspired game to one that can so easily make you quit completely. There’s no need for platforming to be designed this way and again, all this does is shine a light on just how unaffiliated the aesthetic truly is with its desired — and in this case, terribly-executed — level design. It’s a notable low point that is so bad it so often feels like padding as opposed to thoughtful consideration on challenging the player up to that point. 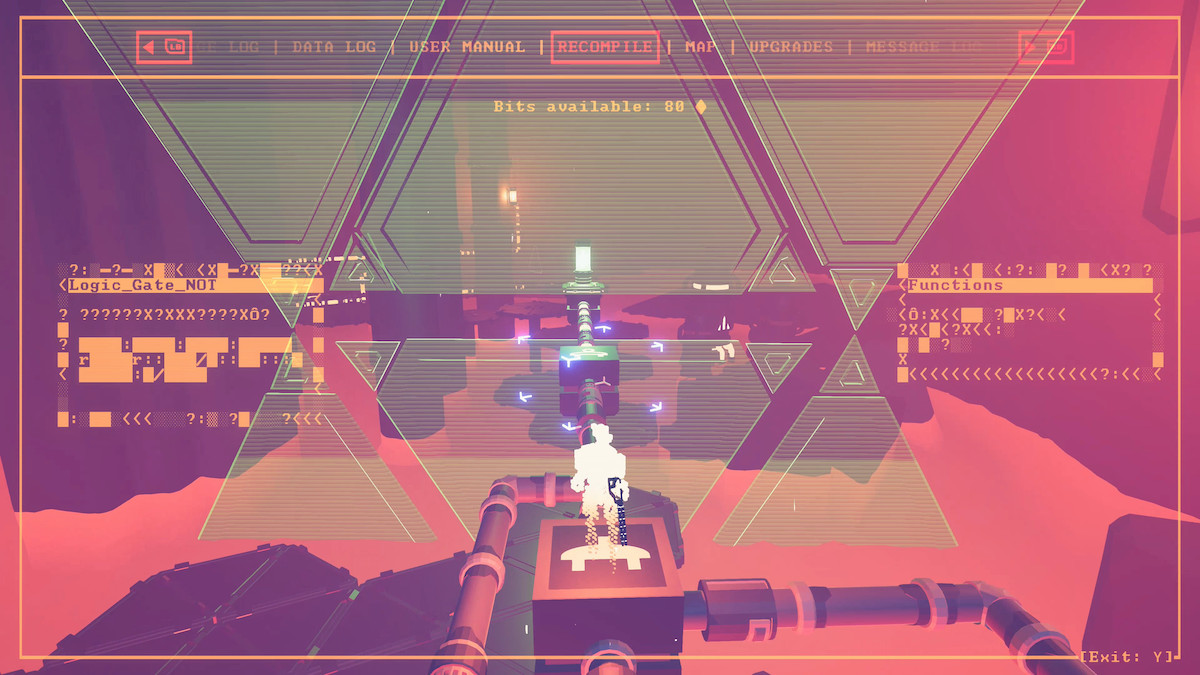 On the surface, Recompile might look and sound like an interesting, potentially unique, proposal. A game that aims to fuse Metroidvania-like exploration, logic-based puzzle-solving and combat in a way that is both mechanically as much artistically intriguing to engage with. Phigames’ delivery, however, misses the mark spectacularly in just how poorly-crafted and at times, off-putting both its level design and means of communication is in instructing the player on where specifically their next destination should ideally be. That’s not to argue against the idea of letting players free to discover and deduce on their own, but Recompile on many occasions feels like a game caught between two different directions on design. Between the suggestion of exploration and the necessity for linear platforming. In the end, neither direction winds up sufficiently well as one should expect. The game does occasionally muster some remnant of satisfaction with the way its world and aesthetic is structured. But a case of artistic vision overwhelming implementation leaves Recompile with a muddled, at times horribly-frustrating sense of progression.