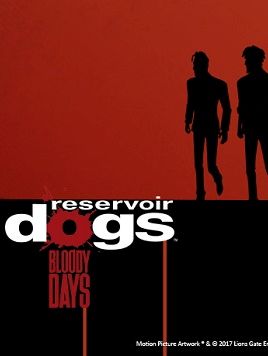 Many consider Quentin Tarantino to be a genius when it comes to films. His gritty and vulgar movies have created more than just a cult following. Reservoir Dogs is one of his earlier movies and involved a story about a few different men that only went by Mr. and an associated color. A heist was botched and the entire movie is about figuring out who snitched to the police and also involves a ton of blood. To coincide with the 25th anniversary of the film, Lionsgate and Big Star Games have teamed together to release a game based on the movie known as Reservoir Dogs: Bloody Days.

Big Star Games aimed to have something stand out about its dedication to the movie. Bloody Days is a top-down shooter that is aimed to be fast-paced and involve strategy for planning each heist. For this strategy aspect, the game offers a “Time Rewind” mechanic that allows players to go back and help downed players or re-play a section to better get through an area. Unfortunately, the execution on this feature is truly lacking. While there is that portion for when the group leader dies, more times than not, this is aggravating and forced. Most notably when clearing an area, the other team members (not controlled by any A.I.) need to meet together in the same spot. What happens is if the game is rewound, you get stuck having to take down the enemies again. Or you will be waiting around for the game to retrace your steps to catch up. The whole idea is clearly tacked on and it does far more bad than good.

Being a top-down shooter, Bloody Days features twin-stick controls. Ammo is limited and melee combat exists. There are no health power-ups so recovery isn’t in it, which may be the only nod to the movie other than the names of the characters. Left trigger can be used to aim for a longer shot with your guns. A huge, annoying aspect is how the players move. If you do not aim the player with the right stick, the player stays facing the same direction making it a pain to shoot enemies or even just navigate an area. 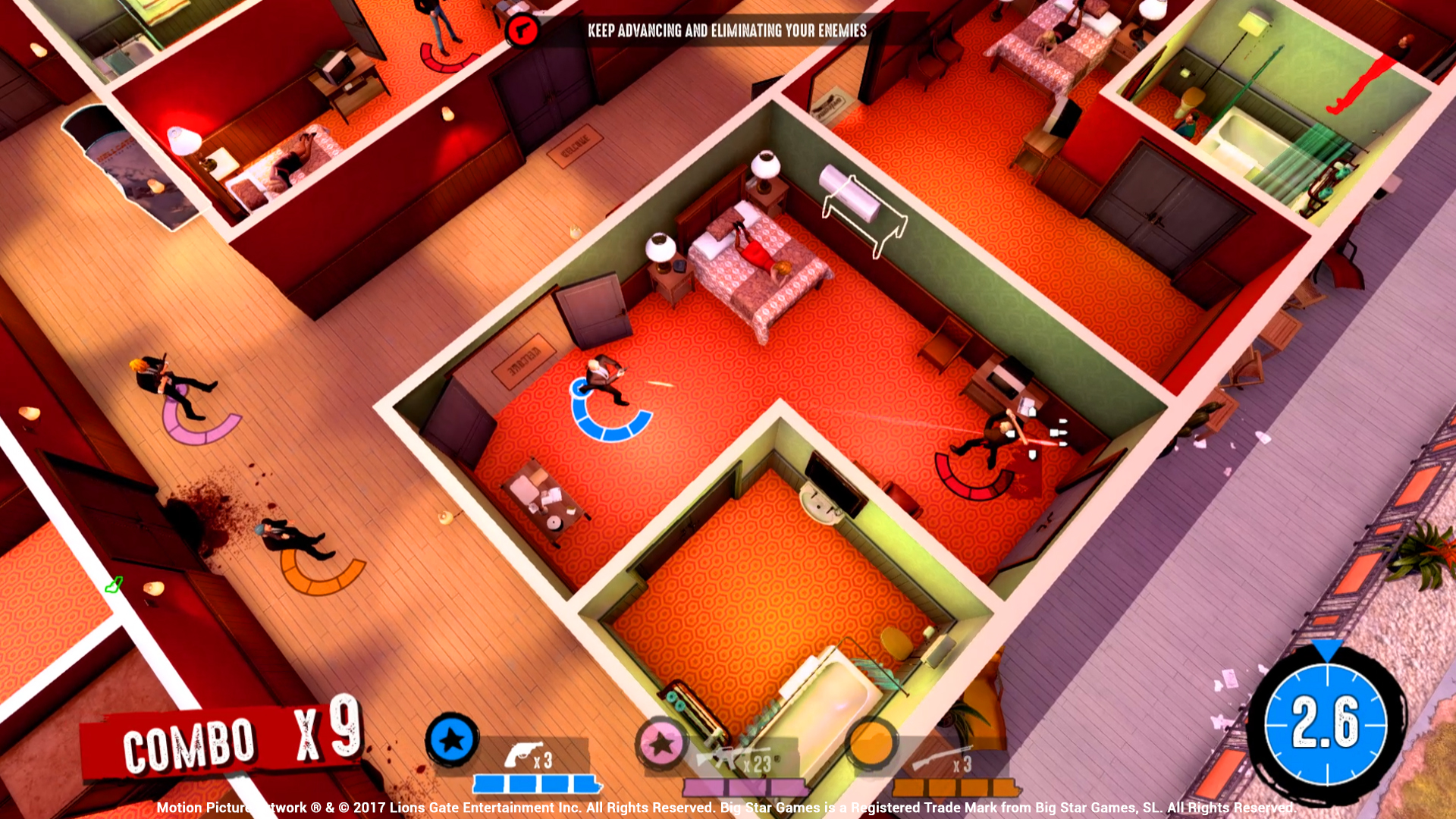 Bloody Days features the six main characters from the movie, with no resemblance from the actors at all. Mr. Blonde, Mr. Blue, Mr. Brown, Mr. Orange, Mr. Pink and Mr. White are all playable at some point, and all have different characteristics. Unfortunately, it just doesn’t feel like you’re playing as anyone from the movie. There is also no voice acting, which further points to the fact that this is a cheap cash-in on a popular movie. The art and visuals are pulled directly from Team Fortress 2, so the game can run fairly well on low end machines.

The focus of the game are the heists and collecting cash. Up to three members can be controlled in a heist and up to 20 weapons are included. As noted earlier, ammo is scarce and guns and batons can be picked up on the fly. Heists are bought into with the cash that is earned as progressing through each one unlocks new heists that inevitably let you play through with different team members.

A top-down shooter like this should have a multiplayer option, but it doesn’t. On top of that, while the rewind option is there, your teammates don’t do anything to help your cause. This is where the “strategy” aspect comes in, but it seems more like a way to cut corners to not support multiplayer and to save time on programming A.I. There is no local co-op, either, and with having six characters to choose from, the progression path of the game is linear and it would make sense to have a multiplayer option. In the end, it just feels like a waste. 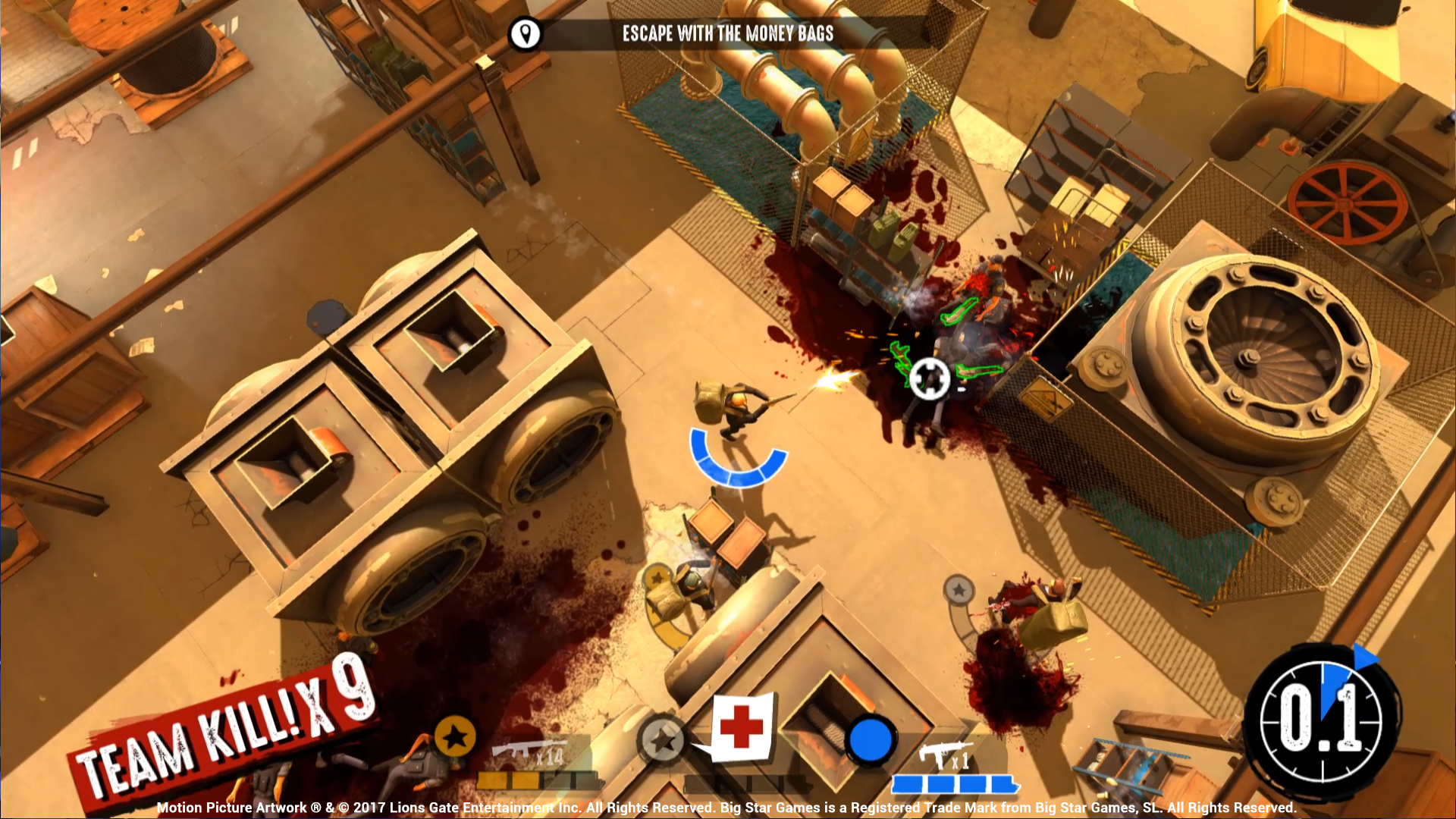 Reservoir Dogs is a classic movie that deserves a better homage than Bloody Days for its 25th anniversary. The only equivalent would be if your dog died and it got replaced with a turtle. This was not an enjoyable experience and feels like an even sloppier cash-in on a movie franchise than the latest Ghostbusters game did. At least that had some depth. On paper, the idea of a Reservoir Dogs game coupled with what Big Star Games is pitching would warrant a purchase, but the annoying Time Rewind feature and complete lack of connectivity to the actual movie makes this feel like a trip to the dentist. Although at least with that you’d come out with clean teeth.