When the PlayStation 4 launched last year, gamers were introduced to the little indie that could: Housemarque’s Resogun. Behind AAA titles like Killzone: Shadow Fall and third-party juggernauts like Assassin’s Creed IV: Black Flag, Resogun was a pure blast of arcade energy that took the best parts of classic Defender and improved upon them considerably. It did nothing new, but it was undeniably addictive. Now, seven months later, gamers are treated to the first paid DLC pack, following in the wake of the free update that offered a surprisingly robust ship editor and local co-op. Resogun Heroes attempts to bring some fresh ideas and welcome refinements to the already excellent Resogun formula, but at a full $5, are there enough? 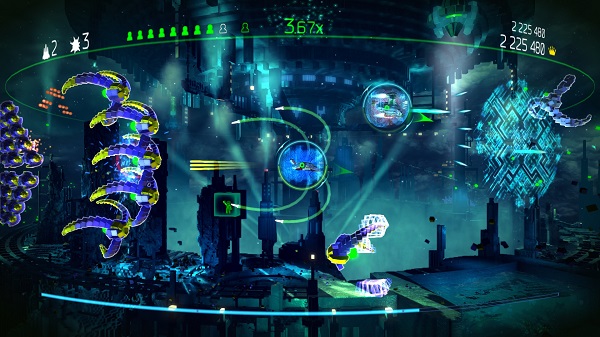 There are two new modes available in Resogun Heroes: Survival and Demolition, each bringing their own unique gameplay elements to the table. Survival takes the classic “save the humans” gameplay of the original Resogun and twists things up a bit. The main goal, as expected, is to rescue the humans wandering around the city. However, they’re no longer trapped in boxes, instead parachuting from the skies or being ferried around in the Keeper ships themselves. Even better is that you save them simply by collecting them, no need to deliver them to the safe location. This definitely gives the game a better flow, as the ferrying back and forth of the human captives made the original Resogun drag a little bit. But that’s not the only change: in Survival, you have one life. That’s it. You die once and you start the whole thing over. It sounds crazy, but Housemarque added some cool additions to quell the tension. One nuance is the day-to-night transition, where each phase also has cosmetic changes as it continues. It adds a nice bit of dynamic essence to the game. Also, while you only have one life, you can earn upgrades to your shield so you can take an extra hit, along with shooting power-ups and bombs. Survival is a much more frantic Resogun, but the more streamlined method of saving humans keeps the tedium far away. 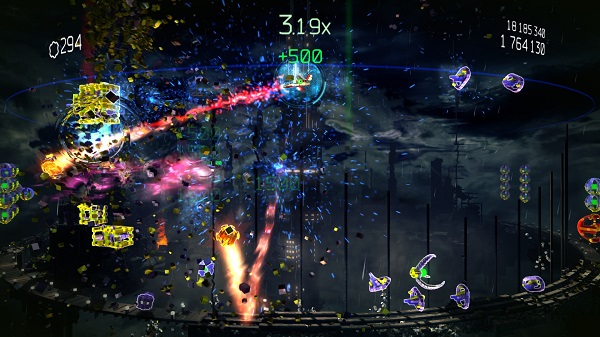 Demolition is an enormous change from the Resogun formula. In the mode, you have no boost, no bombs, no Overdrive, and…wait for it…no guns. Your only method of attacking is through a charging wave attack (which needs recharging after use) to ricochet giant red spheres around the level, a la Arkanoid. The spheres are the only things that can provide projectile attacks (your wave attack can destroy enemies and blocks, though its range is limited). The game definitely feels slower when under the Demolition rules, but the creativity involved with the mode is actually quite fun. You can earn new power-ups as well, like an instant recharge or being able to lay a new red sphere for “extra ball” attacks. Without any direct projectile attacks, the game makes you feel even more defenseless than survival; the pacing isn’t as demanding, but there’s always a sense of adrenaline pumping when you’re blasting multiple spheres around the stage, while dodging enemies and the spheres themselves (because yes, they can hurt you too).

The two new modes are the main course, but Resogun Heroes also has some fresh music, new enemy types, an entirely new level and new trophies to collect. For $5, though, it still feels a tad steep, especially with the original Resogun currently going for $10. The new modes, however, strike a nice balance between the subtle twists (Survival) to the full-on reimagining (Demolition). Housemarque could’ve packed on a little more extra content to justify a full $5 for the DLC, but the content itself is imaginative in the right ways. 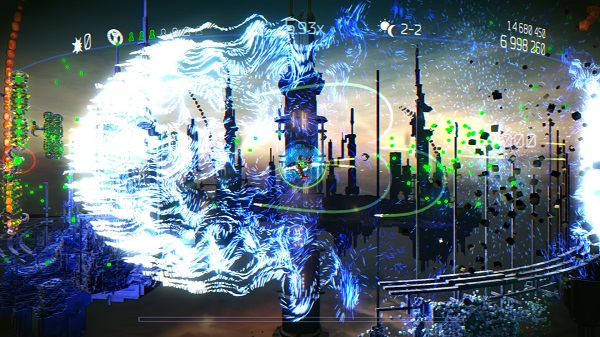 Resogun Heroes takes enough risks to be interesting, while not alienating those who’ve stuck with the game since launch. The two new modes have plenty of unique elements to be worth checking out, while still keeping your palms sweaty as you thread the needle through a swarm of ships. The Demolition mode might be slower, but the exhilarating rush of blasting through enemies with an extra ball power-up strikes the same feeling as when you tear enemies a new one with Overdrive in the original mode. Survival stays truer to the original, but the improved human rescue system does wonders for the pacing, even when you’re rushed by a fleet of ships and only have a single hit left in you. The minor inclusions like new music and trophies are respectable, though they don’t have enough of a lasting appeal to make a huge impact to the DLC. That makes the $5 price tag a tad too steep, at least for newcomers to the series. Resogun Heroes is sure to please those who got that first rush when Resogun launched with the PS4 last year. It might not be the most essential or comprehensive inclusion for the game, but it’s still great where it counts: pure, adrenaline-drenched, space-blasting fun.