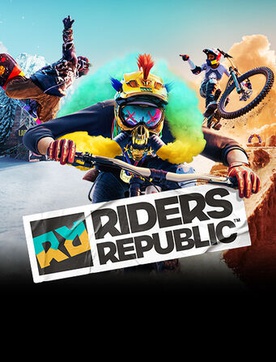 Back in 2016, Ubisoft Annecy released their first original title, Steep, an open world extreme sports game that allowed players to ski, snowboard and soar the skies in paragliders and wingsuits. The game launched to a mixed reception from players and critics alike, with our own review praising the gorgeous open world but taking issue with the trick system and myriad of technical issues. Despite the lackluster launch, Steep still found a decent following over the years, including enough to justify two additional expansion packs based around the Olympics and X Games. Four years later, Ubisoft Annecy returned to the spotlight with the announcement of Steep’s spiritual successor, Riders Republic, which promised a wider variety of races and challenges to partake in, including Mass Races which pit up to 64 players in a multi-round and multi-sport event. Featuring an overhauled control scheme and a vast, gorgeous open world to explore, Riders Republic takes itself less seriously and is better off for it by embracing players of all skill levels and playstyles.

The first hour of Riders Republic features the game at its most linear, as players do basic customization and are shuffled from one event to the next with the occasional cutscene to introduce newcomers to its world. The cinematics and the characters that they center around try their best to be relatable and humorous, but rarely succeed in either regard, which will likely lead most players to justifiably skip the reality show-style segments. The titular Riders Republic serves as an in-game contextualization for the real world community that Ubisoft aims to build around the game, as players slowly work their way through solo and online events towards the Riders Ridge Invitational. The solo events can be played either alone against ghosts of other players or through Versus Mode with up to five friends, and completing them will unlock more challenging Boss events. Fortunately, players who would rather spend their time exploring the open world or participating in online races will still gain stars that add up towards the player’s overall progression, which helps them unlock new sports types, events and additional rewards.

Riders Republic offers a solid variety of gear to ride, including bikes, snowboards, skis, wingsuits, rocket-propelled wingsuits and snowmobiles. Players can also discover more eccentric gear called relics that are occasionally used in the more offbeat Shackdaddy challenges, ranging from pizza delivery bikes to jet-propelled skis and even a plane wing strapped to your back. Nearly every piece of gear we tried out felt good to control, with most of our playthrough using the Rider control style that allows for more camera control and places trick maneuvers on the buttons, whereas the Trickster control style moves tricks down to the right analog stick. With most races relying on tight turns to drift down or trees to avoid, players who can master the unique braking styles of the ground and snow vehicles will be better suited to make it to the finish line in one piece. But when you inevitably mess up by crashing or missing a checkpoint, Riders Republic helpfully features a rewind mechanic much like Forza Horizon to put players back in a safer spot, or players can mash the designated button to reappear on their gear if they’re still headed in the right direction. Most vehicles also offer a sprint or boost button to utilize and manage as it recharges, while wingsuits provide a slow mode to help regain altitude or avoid collisions. 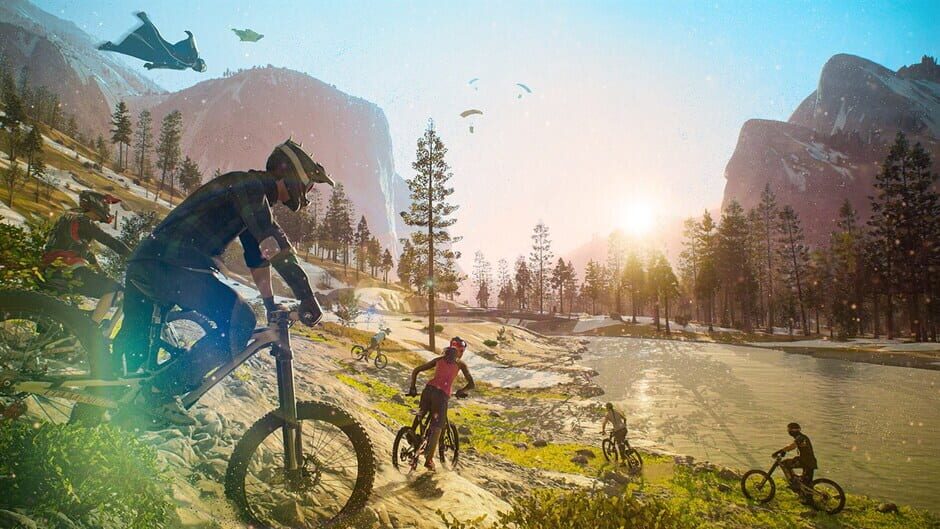 The open world of Riders Republic encourages some of the most relaxing and experimental moments as players can easily fast travel, set waypoints and swap on the fly between any piece of gear in their roster all without any menus. Thanks to the world’s environmental diversity that includes tall mountains, deep canyons and plenty of forests, players could easily spend hours soaring through the skies or traversing various slopes while AI and fellow players inhabit the world alongside them, helping the game feel alive and inclusive. Exploring new areas can help players discover landmarks to view, collectibles to gather and stunts to perform which highlight some of the most-challenging sequences, such as maneuvering bikes along narrow paths or rapidly descending a mountainside. If the noise of shouting riders and presence of pesky objectives gets too overwhelming, Riders Republic also features a Zen mode that enables players to ride without any of the aforementioned distractions.

Both offline and online events are primarily separated into two types, races and trick battles, with both featuring modifiable difficulties before the event begins and secondary challenges to complete to gain more stars and encourage replayability. Races can either require the player to complete multiple laps or simply reach the designated finish line, with checkpoints to help guide the player in the right direction. Since these checkpoints are required, the spacing between each one can often force the player’s hand on how they approach each segment of the race, but most races still feature deviating paths and jumps to keep players on their toes and are long enough to allow time to recover from any mistakes. Meanwhile, trick battles will provide participants with a limited number of tricks to perform to gain points as they head along a given path, ensuring that players try to perform more complicated maneuvers instead of spamming simple tricks to achieve a high point total. Despite how simple it can be to perform tricks through using either buttons or the right analog stick, the high point totals that these events demand even on lower difficulties can make them easy to finish but tough to win, leading them to feel less accessible and immediately gratifying as the races do. 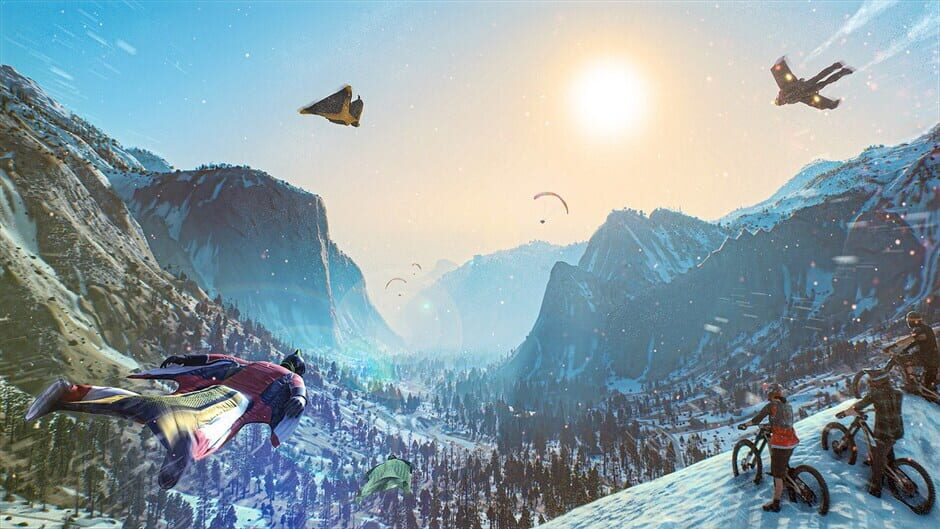 The main hub of Riders Republic isn’t as essential to regularly visit as some other games, but still features a number of useful ways to enhance your time with the game. The shop allows players to customize their appearance using in-game or real currency, with rotating items that change on a regular basis. Photogenic players can show off their pictures in the Creation Center, while the sponsor booth offers daily contracts to complete for additional rewards. The hub also provides access to a tricks practice area to improve your aerial skills, and serves as the starting point for multiplayer events, which feature full crossplay and can also be accessed through the in-game menu. In addition to a rotating playlist, players can face each other in free-for-all races or trick battles with up to twelve total competitors and separate divisions to rank up in, with the game having reliable matchmaking at launch that rarely takes more than a few minutes. The online events aren’t without their share of issues, since colliding with other online players mid-match can be somewhat unpredictable and occasionally stop you in your tracks altogether, and the lack of an option to choose what kind of race you want to partake in seems like a major oversight. But these issues are far easier to overlook with the central multiplayer offering, Mass Races.

Mass Races are three round relays with up to 64 players where certain checkpoints will trigger a shift in the gear you’re utilizing, much like Mario Kart 8 or GTA Online races. Jumping off a ramp on a bike to take to the skies in a wingsuit while surrounded by dozens of shouting players attempting to do the same is a blissfully-chaotic experience, pushing even the most veteran of players to constantly be performing at their best as they race against challengers of all skill levels. Plus, these Mass Races are only available for a four minute window once every half hour, making them feel more exclusive as you see the notification pop up in the open world or the flares light up in the main hub. With so much action happening all at once, it’s more understandable when you see the occasional floating skier or teleporting biker, but outside of one third round crash, the Mass Races work shockingly well at launch and provide one of the biggest incentives to regularly return to Riders Republic.

While Riders Republic may not be among the top-tier of open world games from a graphical perspective, the variety of ways in which you can observe the world, from designated landmarks to skimming the ground in your wingsuit at high speeds, makes the high level of detail on display all the more impressive. The sound design is somewhat more mixed, however, as the cheering riders and realistic vehicle sounds are drowned out by a truly-abysmal licensed soundtrack that features odd choices such as “Black and Yellow” and an undeniably cursed adaptation of “Gangsta’s Paradise.” Riders Republic also features plenty of accessibility options, including four difficulty choices, three control schemes and a dedicated settings section that opens the game up to nearly any kind of player. 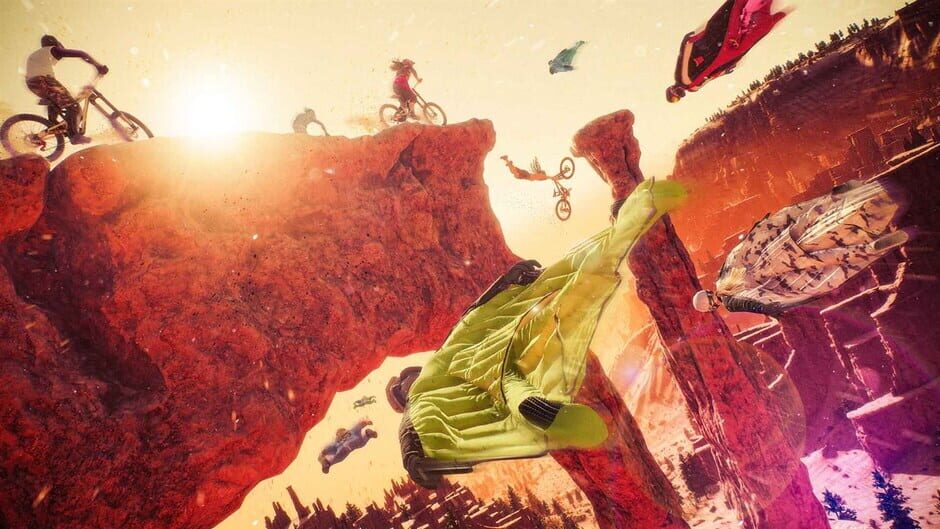 Riders Republic makes a strong case as one of the best and most varied extreme sports games to date, with a solid offering of unique vehicles that are fun to use and master. The expansive open world and huge number of events will ensure that players could spend countless hours completing every challenge and finding every secret, all on top of the exciting multiplayer options. There’s still technical issues to iron out, but whether you want the chaotic thrills of Mass Races or the chilling exploration of Zen mode, the accessible and deep nature of Riders Republic makes it a must-play for racing fans of any skill level.