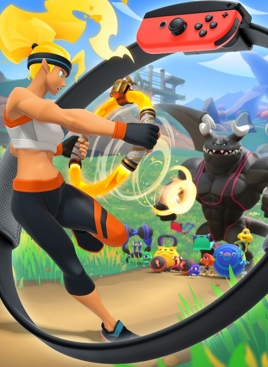 When it comes to associating exercise with playing a game the first though might be things like the Wii Fit, Kinect or even PlayStation Move. All of these were ways to get players up and moving instead of just sitting down to play. Wii Fit was at the time the most valuable in terms of actual exercise, but it was lacking in terms of true player engagement. Then comes Ring Fit Adventure, Nintendo’s latest dip into the exercising sphere. It’s a title that’s not just about exercise, but challenges players to take on a lengthy journey to stop an evil villain and save the world. It’s been a good while since we had an original fitness title from Nintendo, so does it work well or is it just another peripheral to gather dust?

While Ring Fit Adventure doesn’t have a truly gripping story to get deeply invested into, it does have a nice premise to get players working out. It all begins when an adventurer wakes up in a mysterious world. After looking around briefly, they hear a voice calling to them. They’re lead to a ring wrapped up on the ground, who tells the adventurer to set them free. After pulling the ring and undoing the binding, the sky turns dark and a giant dragon appears above them. This extremely fit dragon is Dragaux and after being freed goes on his way to spread his dark power. This is when the player meets Ring, the one who had managed to trap Dragaux in its grasp. After discussing the incident and deciding it best to work together, the adventure taps into Ring’s power and the two set off to put a stop to Dragaux before he fully regains his power.

Every bit of Ring Fit Adventure revolves around two peripherals; the ring-con and leg strap. Before starting, players tighten the strap around their right leg with the left joy-con and put the right on the ring. Each account on the Switch is given their own profile to play on, and each person adjusts how they use the ring and leg strap to their own strength. After going through the introduction and calibration in adventure mode, players are welcomed to the world map. Here they will select the available levels and begin their journey. Most will be linear levels that players will run, and fight, their way through. In order to move, players will physically walk or run in place. The faster they move, the faster their character. Pushing in on the ring-con will blow out air which can break crates to get money or items, while pulling the ring will suck up items along the way. Finally, pointing the ring down and pressing in on the ring con allows the adventurer to jump and temporarily float if they continue to hold it in in order to make occasional jumps and gaps. Once all the basics are down, players will likely find themselves in a fit battle. 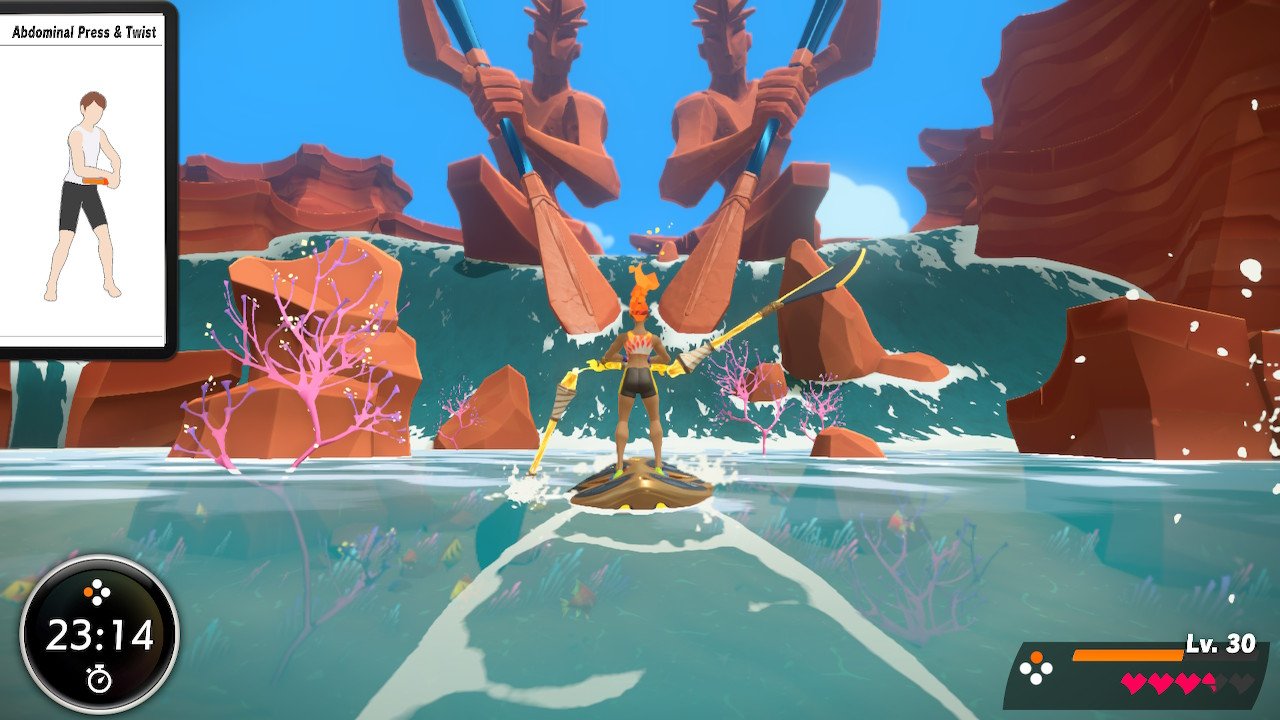 Although a good amount of time will be spent running through the world, there will also be times when they run into ghostly figures on the path. These in turn become fit battles, with the ghostly figures transforming into monster-possessed fitness items. Each one has a clever pun name and can be quite the threat for those who aren’t ready. These turn-based battles require the adventurer to do exercise and turn it into damage. The fitness attacks are earned through story progression, leveling up and treasure chests making it worth exploring. They’re also broken up into four main categories, which further along allow them to deal extra damage to monsters of the same color. Attacks have cool downs for when they can be used again, so players will have to choose wisely the attacks they take into fit battles. Each attack also has on-screen instructions in order to help players get the right positioning, and Ring will remind them to keep proper posture and how to breathe on screen. When the monsters attack, the ring-con is pressed against the players abdomen in order to create a shield which reduces damage. This is one of the most important things to do, as the adventurer doesn’t start with much health and can quickly lose if they don’t pay attention.

Aside from the main levels adventurers will occasionally come across challenges which require a certain exercise be done, in addition to running into towns. Towns are where equipment and smoothies can be bought to help along the way. Equipment will give stat boosts and smoothies will heal, increase damage or help make levels easier. Towns are also where side quests can be picked up in order to gain extra experience. Side quests usually require running through an altered level or gathering certain kinds of items to make smoothies. These are especially great for people who want to gain levels quick, as they offer a lot of exp. There isn’t ever really a need to grind for exp due to this and makes it feel extremely well balanced. 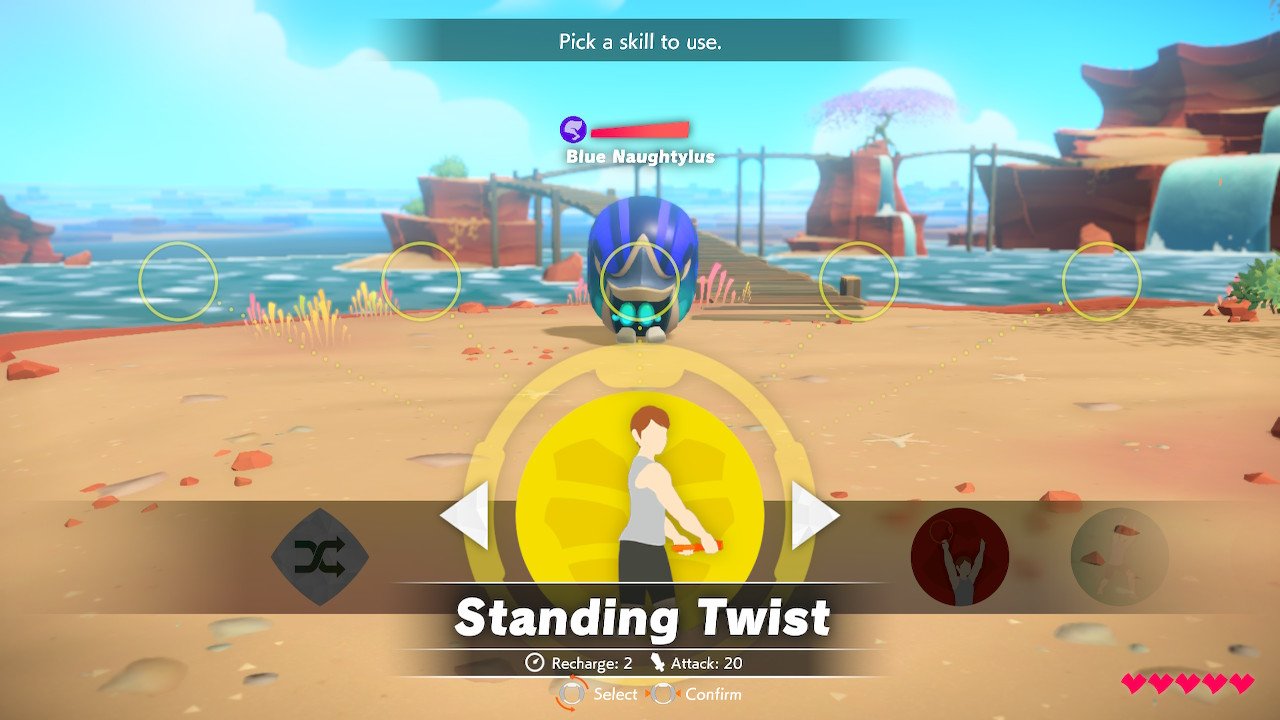 While adventure mode is the core bread and butter, there are two other modes players can dive into at their leisure. Quick Play is a bite-sized challenge mode that lets players select the kind of work out they’d like to do. This includes selecting the individual muscles they’d like to work on, playing mini-games for high scores or doing full sets of work outs in succession. This is a nice way to completely focus on one point of exercise without having to go through the entire adventure mode. The other option is Custom mode, which lets players set up their own work out routine that they can then select whenever they like. There is also multitask mode which records any exercise work with the ring-con a player does and adds it to their exp total when they log back in to adventure mode which makes it great to do with other simple activities like watching TV.

Ring Fit Adventure is a visually-gorgeous title. The backgrounds and area the adventurer runs through are filled with tons of detail, making the run never boring. There are some repeated levels along the way, but they never get boring and revisiting familiar areas makes them feel fresh each time. Mini-games are equally filled with fun details and are a good challenge to boot. The music doesn’t have too much variety, but is uplifting and enthusiastic to keep players going. During adventure mode it can be a tad annoying when it continually asks if the player would like to cool down for the day when they would rather keep going especially since this asking can’t be toggled off. 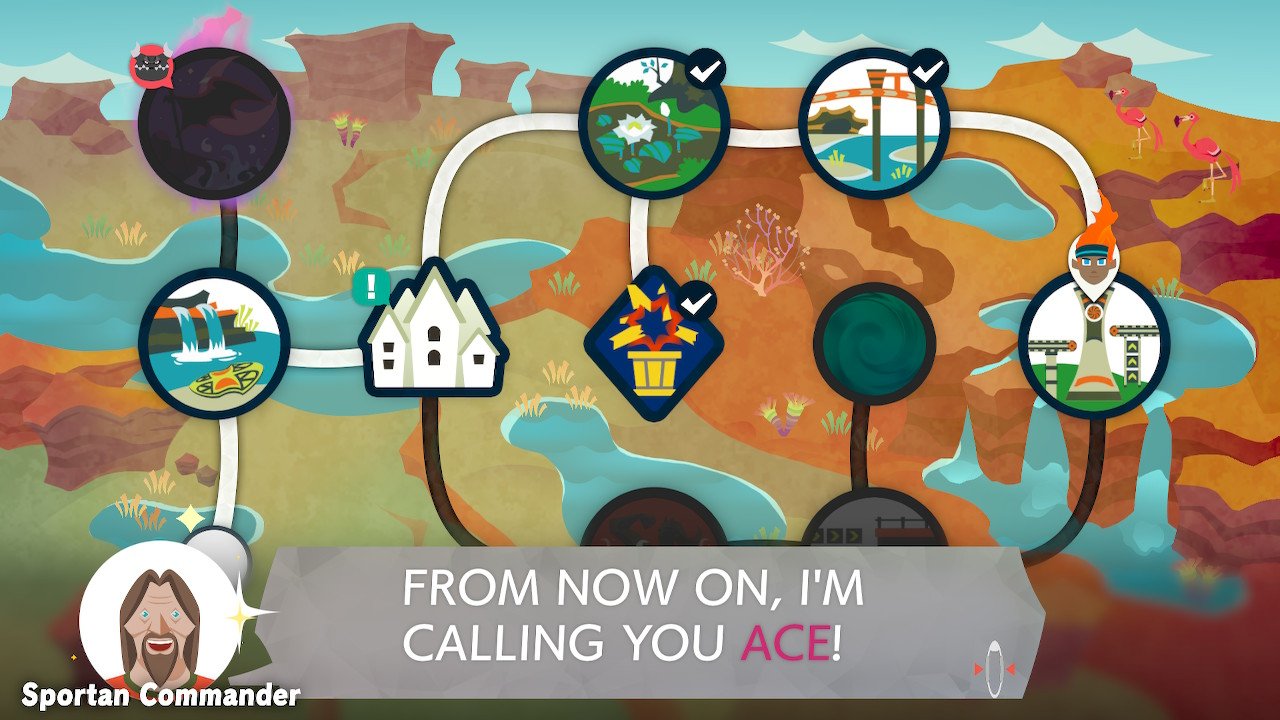 The easiest way to sum up Ring Fit Adventure is that it’s easily Nintendo’s best fitness title to date. It’s a genuine work out that pushes players to challenge themselves and work up a sweat all the while. Adventure mode is one of the most creative ways to enthusiastically push players to keep going, and all the side modes make for a great way to do a little bit at a time while focusing on certain muscles. While players won’t get jacked muscles playing Ring Fit Adventure, it’s a fantastic way to do exercise indoors when other ways to work out are expensive or inconvenient. There’s a ton of variety here to allow players to exercise how they like even without touching the adventure mode. Nintendo has really outdone themselves by combining an encouraging RPG adventure with exercise to push players to their limit in Ring Fit Adventure.