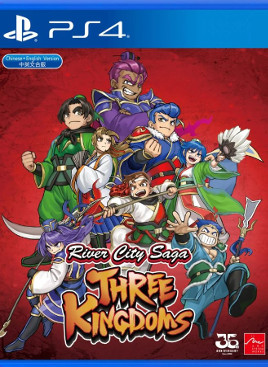 The Three Kingdoms period in China has been influential in creating a plethora of games. Dynasty Warriors, Romance of the Three Kingdoms, Warriors of Fate and the rarely-discussed classic Destiny of an Emperor were all born from the tales of this era. Despite this being a gold mine for video game creation, it was still surprising to see that the newest interpretation stars the cast of River City Ransom. It kind of makes sense since both games involve a single warrior battling opposing forces in large numbers with RPG level up mechanics, but beyond that the two are very different from each other. Nevertheless River City Saga: Three Kingdoms exists and as a fan of both this needed to be examined.

River City Saga: Three Kingdoms is a retelling of the story of the Three Kingdoms era with River City characters filling in for the notable characters. River City protagonist Kunio steps into the role of Guan Yu, which seems like an odd casting choice as he lacks the glorious flowing Guan Yu, but he seems like a good choice aside from that physical shortcoming. Liu Bei’s (Gouda) benevolent leadership makes the kingdom of Shu an easy fit to seem like the “good guys” and Guan Yu’s moniker of God of War seems a fitting role to go to the player. The story is not a straight retelling of the familiar saga. It covers the major events like the Yellow Turban Rebellion and tyranny of Dong Zhuo, but takes enough liberties where it can play out as a River City game.

Anyone familiar with Kunio’s past exploits have a good idea of what can be expected in terms of gameplay. River City Saga plays like a typical River City game. It’s an old school beat ’em up, and since the formula for these games was fun in the ’80s, there’s no sense to change it now. He may be cosplaying as Guan Yu, but he’s still Kunio. He’s ready to explore China with the help of his friends and beat up all the baddies that come his way. Like all good beat ’em ups, River City Saga supports local and online multiplayer. 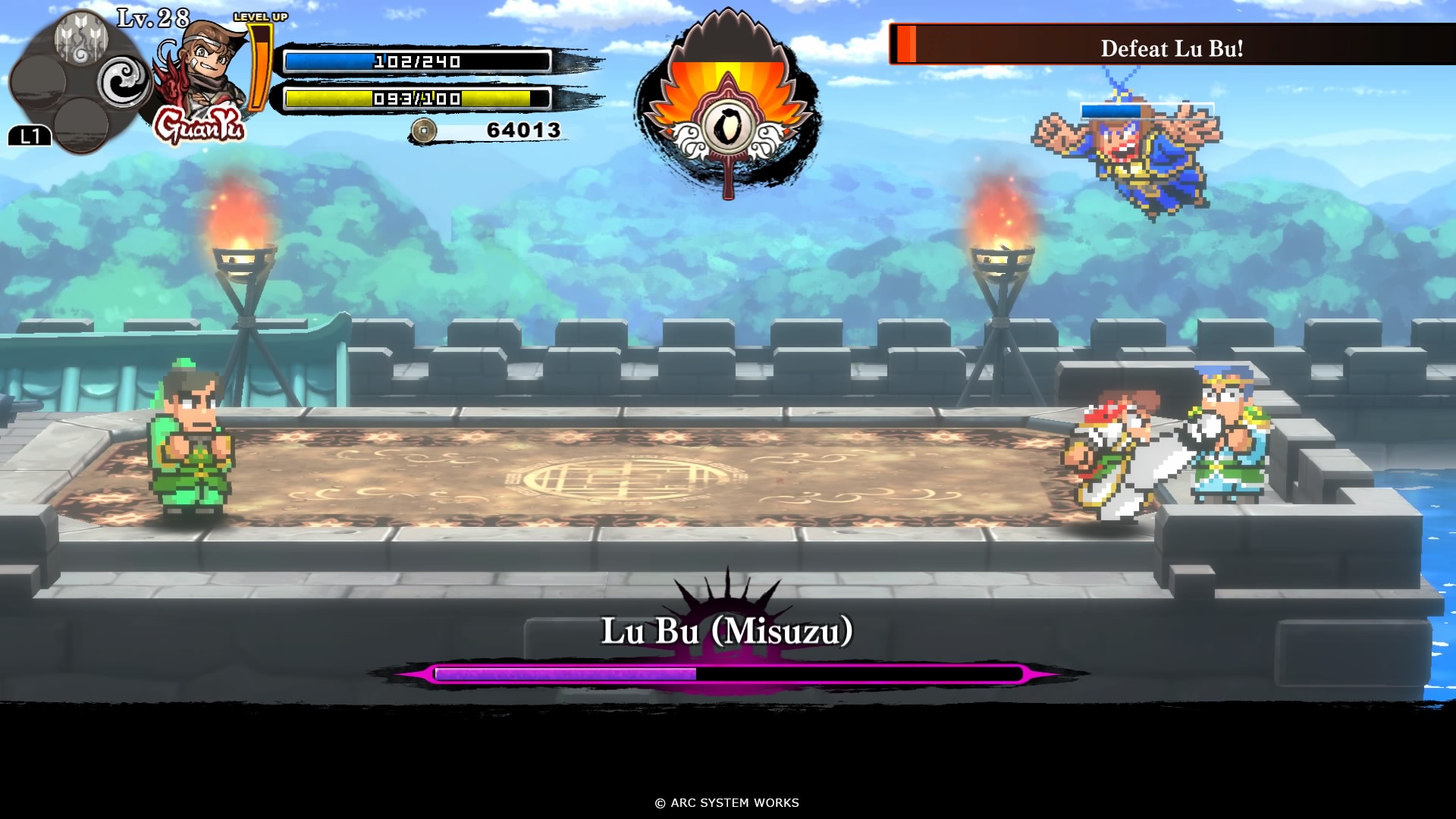 There are two modes in River City Saga: Three Kingdoms. Story Mode is the main mode and this is where the Three Kingdoms story is retold, with a few liberties on how the actual events happened and what gender certain characters happen to be. The River City approach to the story that begins with the Peach Garden Oath is likely the most lighthearted and tongue-in-cheek take on the Three Kingdoms saga where it almost immediately starts in on copyright royalty jokes. The story is spread off across six chapters, each one taking a couple hours or so to complete, depending on how involved the player wants to get in completing every side quest and exploring every nook and cranny of the map.

Like many of its predecessors, River City Saga is a beat ’em up at heart but does mix in a few light RPG elements in Story Mode such as distributing attribute points when Kunio gains a level or finding new equipment and techniques. Kunio begins his journey with only basic punches, kicks and throws but can upgrade his abilities through purchasing new moves at the dojo or as rewards through completing quests from random NPCs. Given that Kunio is often fighting swarms of enemies at once, these abilities can help a lot. A long range aura punch can keep large bands of ruffians at bay while rapid fire mach kicks can hit multiple opponents several times. Acquiring and trying out new moves is part of the fun, and mastering all the different techniques is key to survival. There’s no shame in calling in a flaming arrow strike when fifteen of Cao Cao’s troops are piling on Kunio. 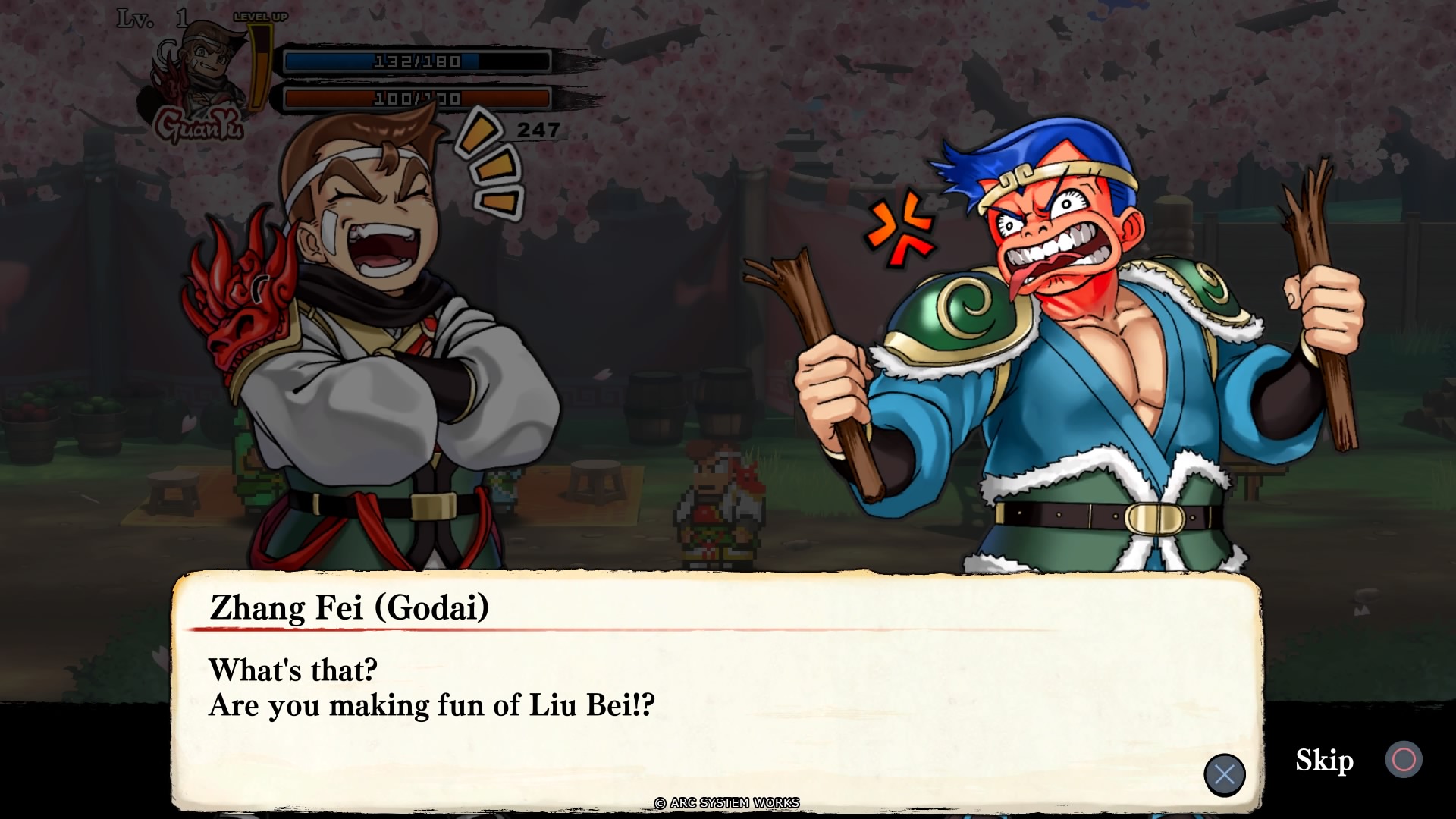 Story Mode progresses in a nonlinear fashion. As Guan Yu, Kunio is teamed up with Liu Bei (Gouda) and Zhang Fe (Godai). Interactions with these two and other characters move the story forward and dictate what Kunio needs to do, but the player is free to explore to area as they see, whether it be taking on side quests for villagers or just exploring the land looking for secrets. The map becomes more open as the game progresses but even if the player just focuses in on the main story, they’ll be doing a lot of backtracking and returning to previous areas, but thankfully the map is easy to follow and there’s limited fast travel (for a price). The player is free to progress the story at their leisure as there are a few hidden places to explore off the beaten path. The side quests taken on from the villagers range from humorous to mundane. Having to go into a bare knuckle brawl against a bear or tigers is entertaining in its absurdity, but backtracking all over China to find trees and hay bails that yield resources can become tedious.

China Hero Mode is essentially what River City Saga would be if it were an arcade game made in the ’90s. Unlike Story Mode, this is strictly a linear progression through the key locations of the main game. There’s no purchasing of special attacks or leveling up characters, just beat up everyone and progress to the end of the level. The old fashioned live bar and scanline filters help solidify the feel of playing a classic arcade game. China Hero Mode initially has sixteen available characters with eight more unlockable. This mode is a nice addition since it’s a great way to kill part of an afternoon with a friend. The only downside with this is that the walk and run cannot be toggled, the character is always running so picking up weapons can be a pain. 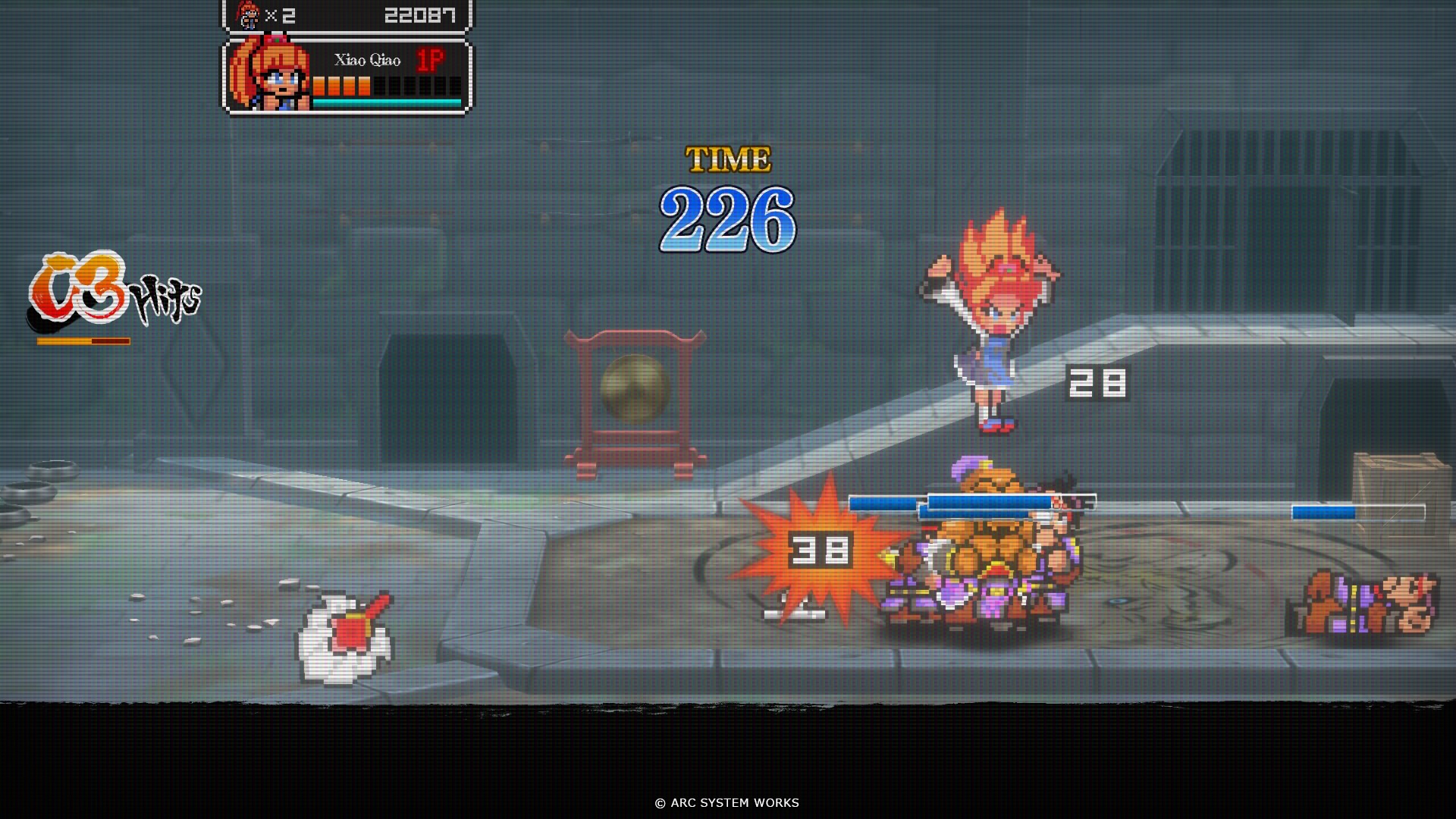 River City Saga: Three Kingdoms takes the familiar characters and gameplay motifs and does a fine job of transporting them into the Three Kingdoms era of China. Compared to the serious tone with most of the other games using this setting, the lighthearted humor that Kunio and company bring feels like a breath of fresh air. The controls could benefit from being tighter (more on that later) but in spite of that this was a joy to play and difficult to put down. The new moves and tactics that Kunio learns make crowd control much easier to manage, but when he’s outnumbered ten to one, having crowd-clearing attacks is what’s needed to level the playing field. The game is presented almost like a play, with each River City character playing a role in a violent historical reenactment. While there’s perhaps too much backtracking and mundane quests, Kunio’s journey through third century is trip that’s worth taking.

The visual style of River City Saga blends modern-looking 3D environments with 16-bit 2D sprites for the characters. Some could argue that the retro and modern styles clash, but longtime fans are likely to view it as a nod to the older games and fits the general lighthearted tone. The controls leave something to be desired. If the controls were to be summed up in a single word, slippery would be sufficient. None of the platforming sections should be challenging, but because of the controls it’s likely most players will take a couple spills in their journey through River City China. The same level of precision for hitting enemies and picking up items is also required which can make sections of the game unnecessarily frustrating. The controls never made it so progress couldn’t be made in the game, but there were plenty of instances where things that should have been simple tasks such as picking up weapons required surgical precision, which isn’t good when there’s a dozen or so goons attacking. The precision needed to pull off successful attacks is even more difficult in China Heroes mode where the player cannot toggle off the run button. The bad controls weren’t so terrible that they prevented the game from being fun, but they did cause unnecessary frustration and held it back from being truly great. 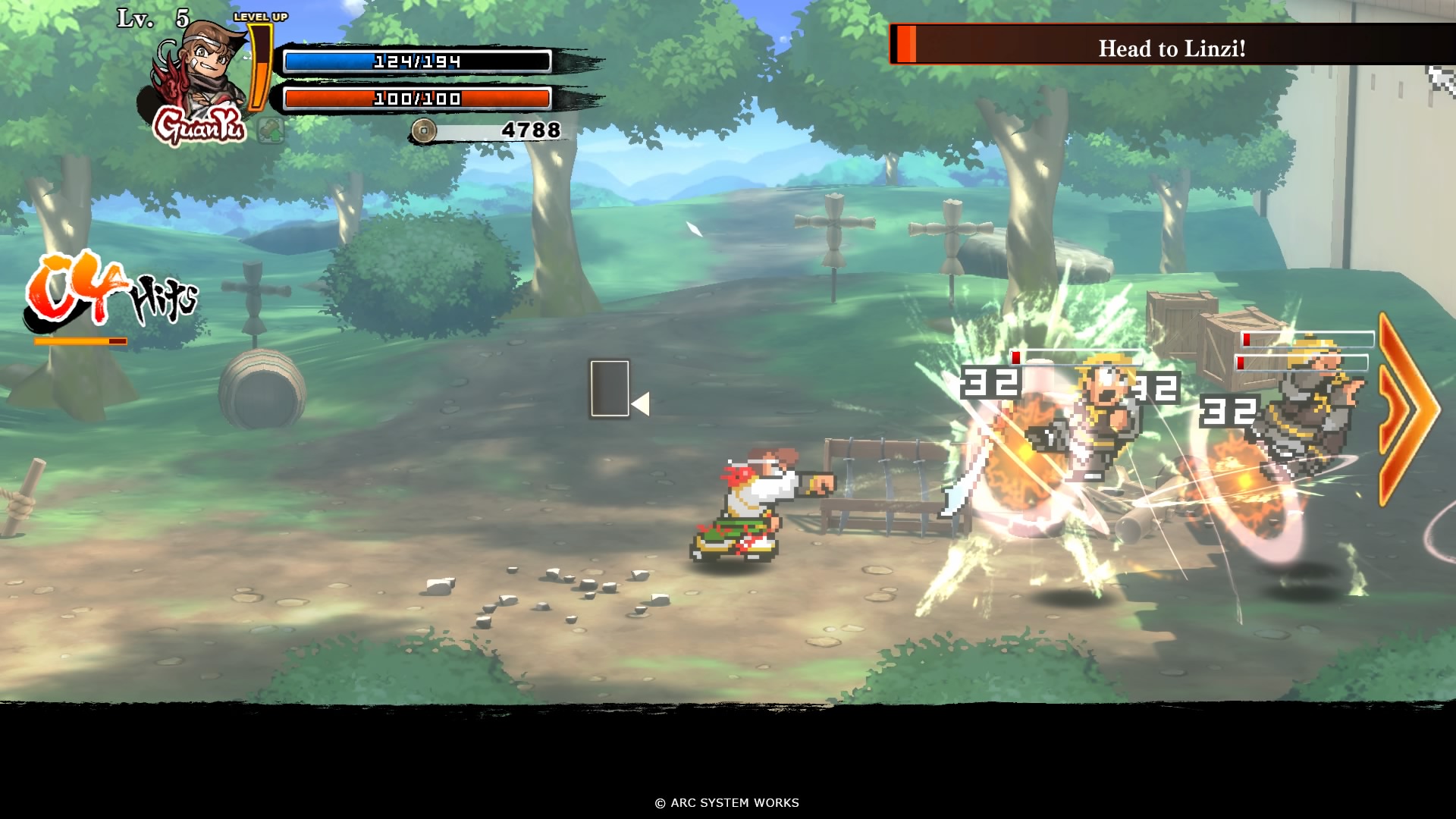 River City Saga: Three Kingdoms is an enjoyable yet unexpected take on Kunio and company. One of the areas it excels is in bringing a new interpretation to the Three Kingdoms story while making it feel at home alongside any other River City game. The controls feel dated, and while recreating many positive elements of classic gaming, they’re too unforgiving when it comes to the required precision in fighting off hordes of enemies or jumping on moving obstacles. In spite of this complaint, River City Saga: Three Kingdoms is a blast to play and maintains the essence of what made this series so popular. It would be interesting to see other source material get the River City Saga treatment in the future.