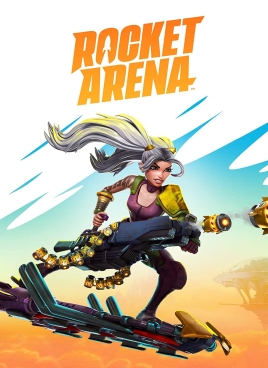 After years in development and a shift in publishers to make it an EA Original, Rocket Arena is finally here. This team-based third-person shooter had its work cut out for it as there isn’t a shortage of bright shooters on the market — but Rocket Arena has a few tricks up its sleeve to make it stand out. The most obvious is its usage of a great many kinds of rockets, but the devs at Final Strike Games have made them feel different from one another and the end result is one of the most fast-paced and diverse-feeling shooters on the market. Its emphasis on traversal mechanics is top-tier and its shooting is fast and responsive.

Traversal is the first area that Rocket Arena excels at because while each character has their own pros and cons, they all have the same core skills to help stay in the game. You have a triple jump to keep the pace snappy and the ability to launch yourself higher by shooting down at the ground, or better yet blast away at the sides of buildings while jumping for a rocket climb that allows you to not only scale buildings but also get knocked out of the arena, and if you’re careful, blast your way back into the arena. This particular skill is thrilling in the middle of combat because one minute you’re knocked out and aren’t sure where you are and then you get your bearings and can quickly get back in the thick of things. Stage layouts are also optimized for this skill as some will feature small awnings or even tiny blimps to land on.

While the core game is a shooter through and through, you’ll need to make use of solid 3D platforming skills to survive. Getting from Point A to B requires you to use platforming skills to get there and all of the different rocket-assisted traversal methods allow you to move around the world with ease. The quick pace evokes a bit of Titanfall, only the environments don’t rely as much on verticality to survive. You still want to be out of sight sometimes just to avoid damage and get a better vantage point — but excelling at the game requires you to not only master the traversal, but also your chosen character’s moveset and seeing how well they work against other enemy types. 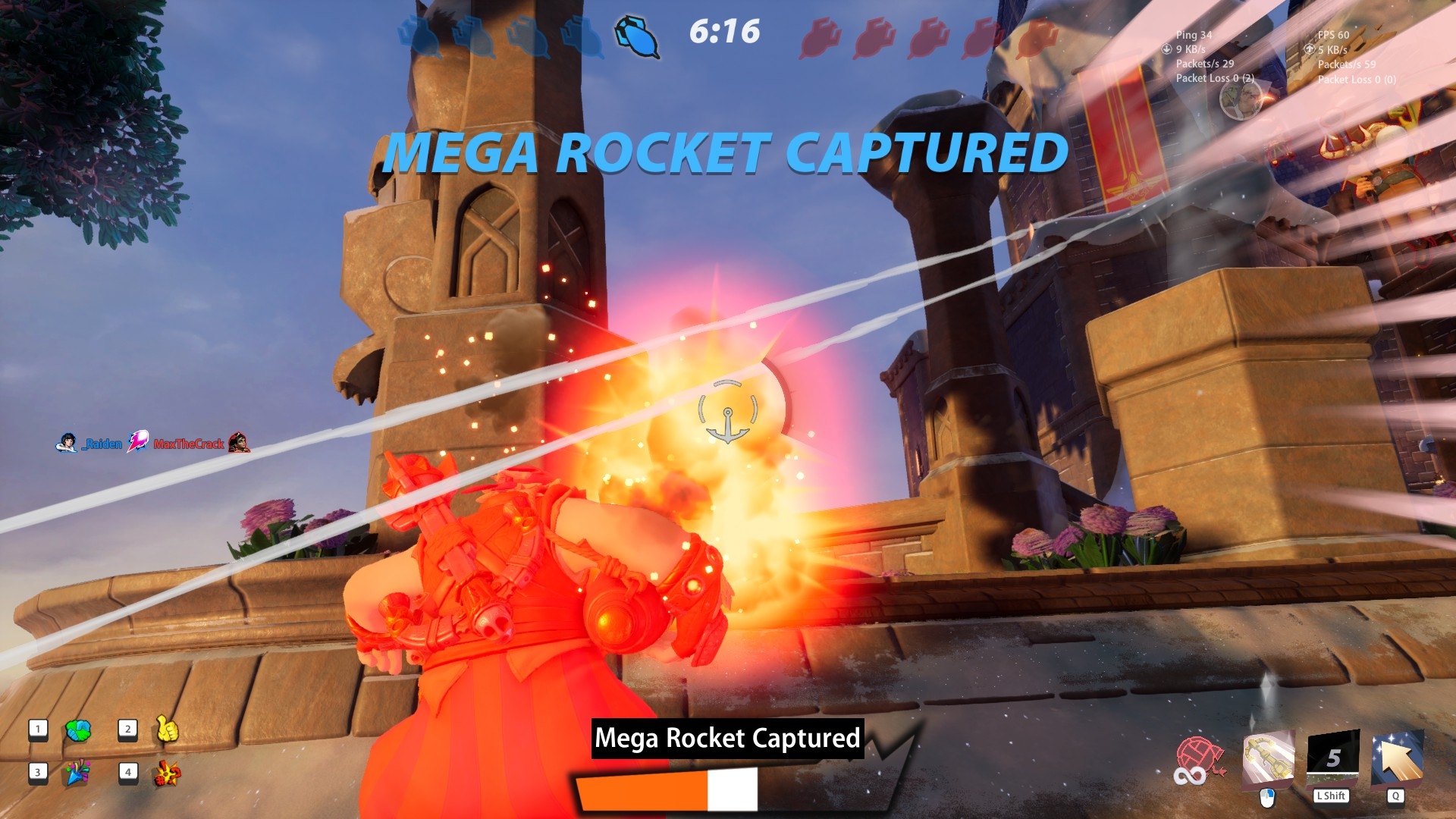 The three-on-three combat takes place across a variety of different maps and game modes, with each mode putting its own spin on the maps themselves. Rocket Arena eases you into things with one of the most enjoyable tutorials since Titanfall, where you have core gameplay mechanics not only told to you, but shown so you can visualize everything before you do it. This helps you get a feel for just how important verticality and moving around as much as possible are to your success. No matter what mode you’re in you want to avoid being a sitting duck as the maps are sometimes compact and while they may offer a couple of hiding places, the three person limit means you’ll been found sooner rather than later if you try and avoid combat.

Much like the PlayStation VR sleeper hit RIGS, which was a personal all-time favorite FPS, Rocket Arena doesn’t just have traditional shooting modes — but blends in some sports-theming to help it act as a gateway game for sports fans or as a way for shooter fans to get a touch of sports in their game. It’s a nice mix and here it comes in the form of Rocketball, where you or your partners aim to grab the ball and take it back to your base and score. Sure, it’s just capture the flag in another form — but the sports theming and usage of a loose ball in play just like it would be on a field helps add second-to-second excitement that a flag just can’t compare to. Much like RIGS and its basketball-themed mode, looking down and properly positioning yourself over the target is a big key here because just doing that can allow you to win quickly and get an upper hand.

Combat is diverse and beyond having both a melee and regular shot, the left trigger also gets you a secondary shot to deal out more damage while you can also use power-ups with B and can knock folks out in one shot if you’re lucky. This can work against you as well, however, and is why being a defensive player can almost be more beneficial than being offense-minded. By focusing on a stick and move approach, you still keep the pace fast, but can avoid getting in long firefights that wind up draining your health. You also have a non power-up special attack that can deal out damage quickly, but has a long cooldown. It’s perfect for when you want to get either an early lead or especially when you want a last-minute save for a round as it can be a tie-breaker attack if need be. 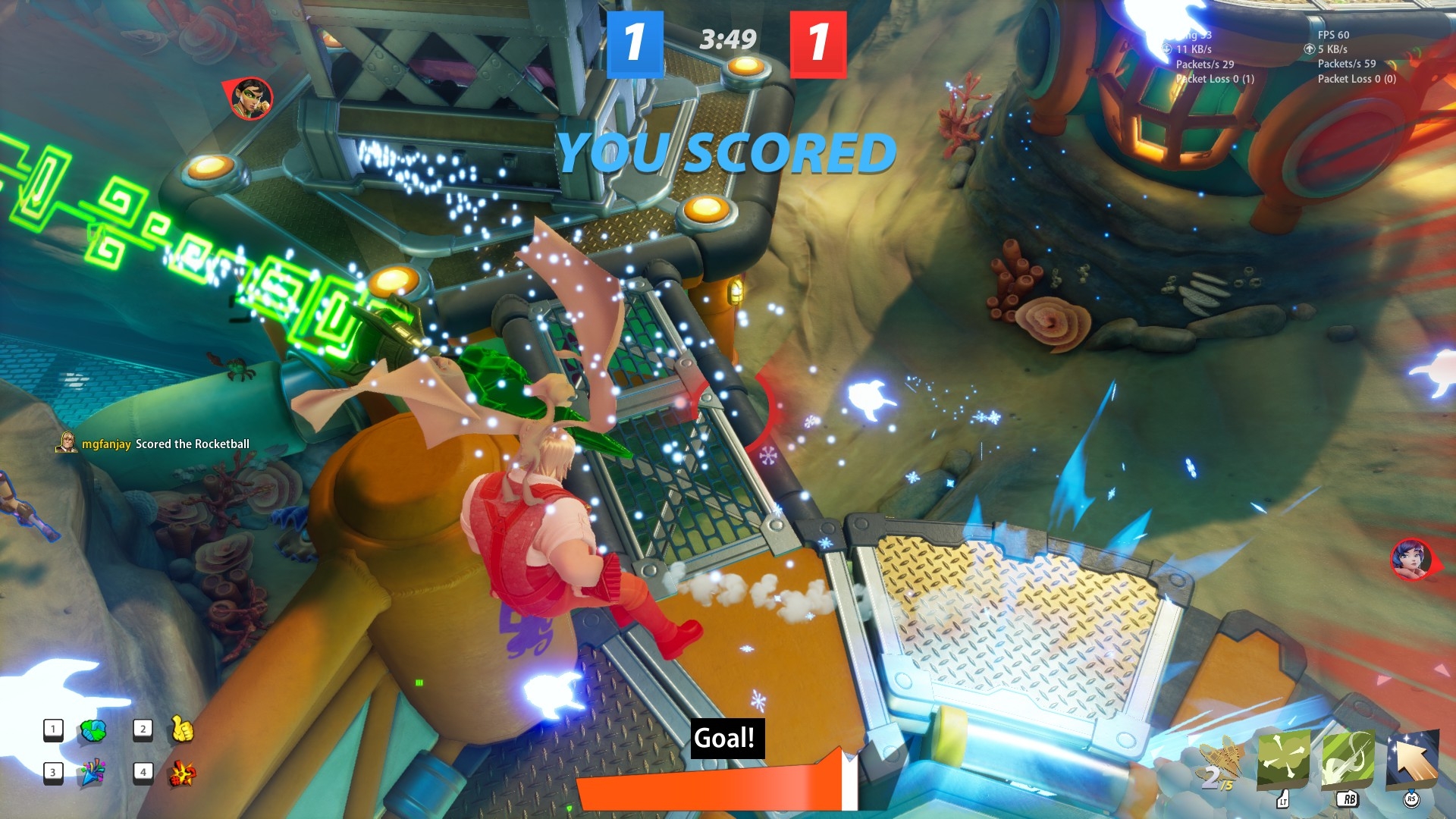 The small and evasive Jayto is great for tight maps where you can at least get a KO assist if not a full-on knockout with his spreadshot, while the blonde and muscular Boone is better at short-range, but still deals out healthy damage thanks to a charge shot with his secondary attack that can take you out quickly. The massive Blastbeard is a personal favorite as he’s just a tank with a massive frame and does huge damage with both his primary and secondary shots. You can’t hide at all with him though, so you need to be on your A game to excel or else you’ll get destroyed quickly. The old gunslinger Topnotch is a lot of fun to use as well, as he’s more of a marksman, so you can be a bit more accurate and fine-tuned with your combat. His secondary attack is a heavily-damaging charge shot that takes some time to get going, but can almost be a sure thing when it comes to setting folks up for a knockout.

Being a third-person shooter, Rocket Arena truly excels at making each character feel different thanks to their body language and how they get around. The older Topnotch is a bit bow-legged, while Boone flies around with a dragon on his back. Blastbeard lumbers around, while Jayto dashes from place to place with ease. The animation is good and each character’s facial expressions help them get across the thrill of victory, agony of defeat, or things like their own arrogance after a win. The environments are impressive to behold, with swapping pans before the battle that allow you to learn their basic layout, while your time in-game allows you to be impressed with small touches like posters on the wall adding a bit of world-building.

Rocket Arena does falter a bit when it comes to audio. While the character-specific soundbytes are fine, the soundtrack never gets out of first gear. Every song is good and nothing is bad, but none of the music sticks with you after a play session. The sound design is stronger when it comes to weapons and how they sound in different environments. In the underwater area, your attacks sound a bit more muffled due to the water than they do above-ground — which is a nice touch of realism in a surreal setting. 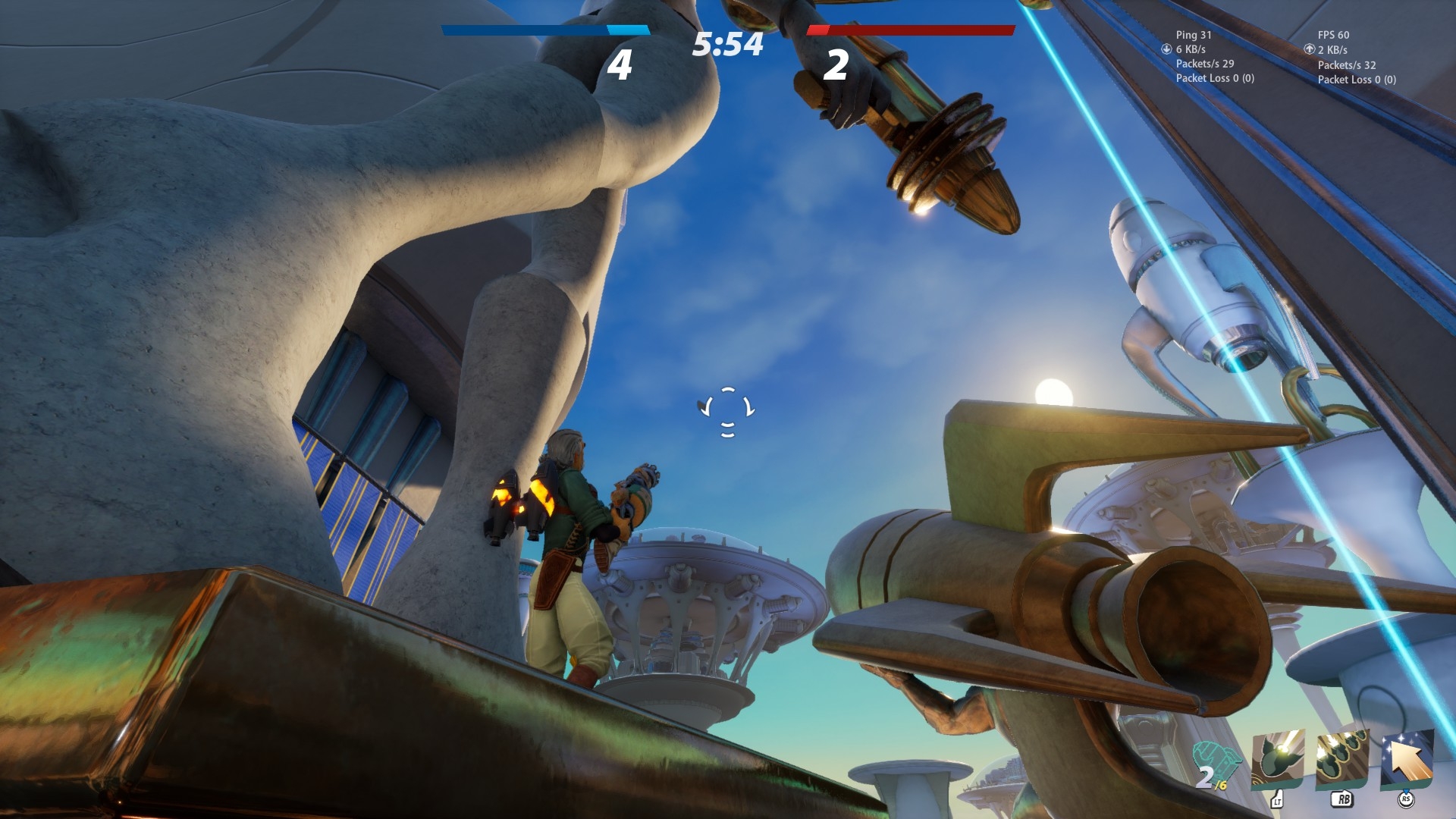 Rocket Arena is a fantastic game with well-crafted shooting mechanics and a diverse mode lineup that manages to be both fun in short bursts and long play sessions. There’s more tweaking that can be done to make it a more robust experience as the roster is lean at launch, but what’s here is great and every character manages to feel different from one another. The mix of shooting and platforming skills helps make it a great gateway shooter for those who may not otherwise enjoy the genre and its quick pace ensures that no match is ever boring. The graphical design is sharp, but the soundtrack could use some work even with strong sound design that helps amplify the effects of your rocket-filled arsenal.