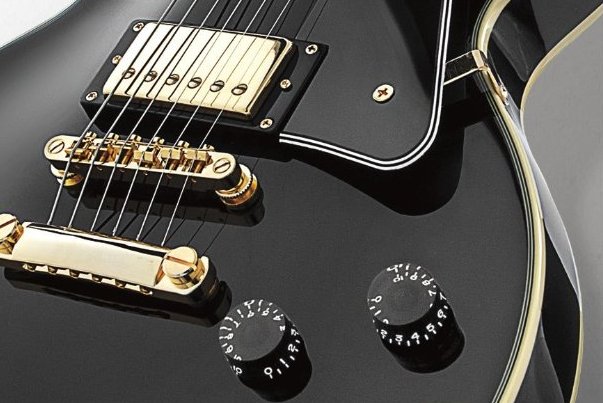 Over the years, I’ve learned a lot from video games. I learned how to drive a car and subsequently run-down a prostitute from Grand Theft Auto; I learned how to steal priceless artwork from Thief, and I learned how to become addicted to a variety of mind-altering drugs from Max Payne. I owe a lot to the teachings of video games, and Rocksmith is no different. Sure, it didn’t teach me how to dig a grave for those tire-marked courtesans, or how to evade the police. It didn’t teach me how to foil an ongoing murder investigation after the discovery of fingerprints on a concealed Pendleton Hunter, or how to survive in the wilderness by building shelter from hitchhiker bones and tree branches. Rocksmith didn’t teach me a lot of things, but what it did teach me is more valuable than any lesson learned elsewhere: how to play the guitar, and frankly, that’s pretty cool.

The first thing you need to know about Rocksmith 2014 is that you must own a guitar. These aren’t the run-of-the-mill plastic offerings you’ll find bundled with the now extinct rhythm games of yesterday, but rather the real wood-n-metal deal. You know, the looks-easy-but-is-hard-as-hell-to-play guitar we’ve all desired to master after hearing Hotel California for the first time. The second thing you need to know is that Rocksmith 2014 isn’t a sequel to the original Rocksmith, as much as it’s an overhaul of the complete system. This may scare away those who already own the previous version, but know that this update improves upon the foundation built by its predecessor in ways that intensify the enjoyment, enhance the lessons, and eliminate what issues held back its immensely under-lived potential. It’s the same concept promoted back in 2012, only expanded upon in ways that impress beyond its purpose as a game-turned-learning tool. 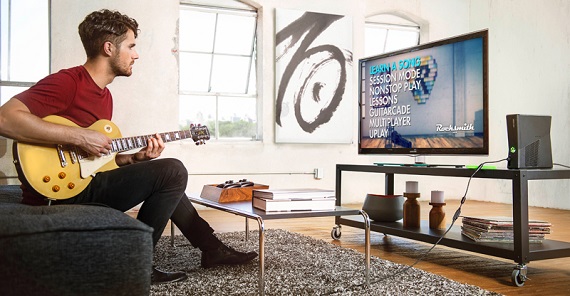 Before setting out on you’re path to stardom, you’re prompted to select an ability level. The friendly introduction helps you adjust the lessons and gameplay by answering a few simple questions such as which role you’d like to study (lead, rhythm, bass), and whether you’ve played the previous version of Rocksmith. I decided to start things off as a novice, as loading this game marked my first true guitar experience. Of course, Rocksmith has a variety of levels available, ranging from the lowly beginner to the axe-slashing Keith Richards — also known as the Master level.

After taking my history with music and instruments into consideration, I decided that it would be best to bump myself a step above the very bottom (skipping over several basic tutorials available to those who select the beginner level). From the moment I received my copy of Rocksmith, my intention was to learn a skill that didn’t yet exist. I wasn’t satisfied with simply reviewing the functionality of the software, as it’s easy to inspect, observe and list new or expanded features. The real value of Rocksmith is in its worth as a training tool, and that takes practice. Lots, and lots of practice. Does it work? Is it practical? Can it actually teach a person with no previous knowledge of the guitar to play? These are the questions I asked before spending time with Rocksmith 2014, and the answer to all three was a resounding yes.

Even the 50 available tracks range in skill-requirement drastically, and offer something for players of every skill-level — something the original title lacked. The entire Rocksmith catalog supports the new system as well, allowing you to import and purchase songs as you see fit. At this time, those with a copy of the original Rocksmith can import the entire set of tracks for a small one time fee ($9.99). 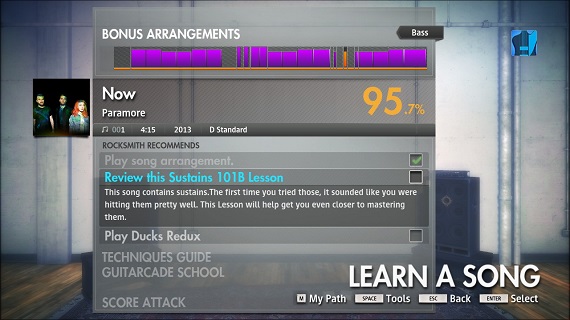 Every aspect of the interface is accommodating as well, stealing very little of your precious time with confusing choices or needless options. The newly redesigned menus are as easy to navigate as they are aesthetically appealing, and sessions, songs, the Guitarcade mode and an assortment of other destinations are easily accessed with a single push of a button. Gone are the pesky loading times that plagued the original Rocksmith, and in their place a smooth transition that runs as flawlessly as you’d expect. In less than five seconds, I was transferred to a session from the main menu — another improvement that makes the entire experience just a little more accessible. The game even goes as far as to demonstrate proper tuning and restringing, vital skills for the everyday guitarist that are just as important as learning to jam like Randy Rhoads.

While the pretty menus are nice to navigate through, the real meat and bones of Rocksmith are the lessons that will improve your guitar skills through simple and fun exercises. While these lessons can be accessed from the main menu, a unique feature included to help players improve quickly has been implemented. When you select a song, the game will automatically recommend lessons based on your song choice, and help you master the skills required to play that specific track. Rocksmith furthers this concept by adjusting the difficulty based on your level of improvement throughout the sessions. A slow learner? Worry not, as you won’t have to concern yourself with those fancy power chords until you start hitting your notes like a pro. Essentially, the better you do, the faster the difficulty level escalates. 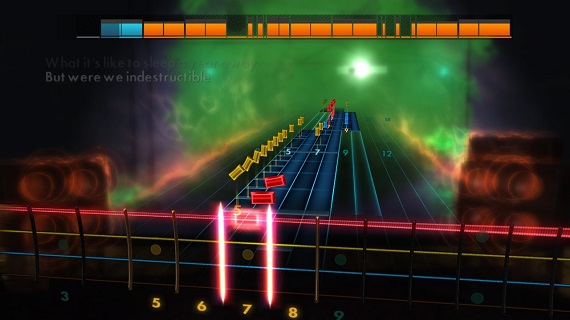 Now, Rocksmith wouldn’t be a game without missions, right? Well, maybe it would be, but with the Mission Mode you’ll constantly be tasked with completing certain objectives that allow you to choose where you focus your attention. This lends a feeling of progression throughout the learning process that really helps you feel like you’re reaching a goal, as apposed to following a long-winded tutorial. It’s easier to learn when nothing in the game feels like a “Guitar For Dummies” guidebook, and constantly being thrown new objectives to complete makes learning to play as enjoyable as possible.

However, once you begin hitting notes with little fault, Master Mode will activate, and in Master Mode the notes simply disappear, making your playing less assisted — if only for as long as you manage to keep your cool. There’s no better feeling than perfecting a difficult section of a song and watching those prompts fade into the bloated ego floating above your neck. Don’t get carried away like I did and break your guitar after a nifty solo. Pro tip: the guys at Guitar Center have a great memory and recall that said guitar “didn’t come that way.”

A new and exciting inclusion to the vast repertoire of tools at your disposal is Guitarcade, a feature that helps you improve your skills through mini-game-esque lessons, quickly and efficiently. My favorite from the bunch is Scale Racer, a game which has you evading police in a high-speed chase down a busy highway. Escaping is as simple as switching lanes, which conveniently requires you to accomplish a basic task (such as hitting the correct fret). Each session comes with its own set of ever-changing objectives, keeping you busy as you improve your skills over time. Every mini-game targets a different skill-set or specific technique, and playing through them is as fun as it is beneficial to the learning process. This creative addition allows the lessons to truly feel like a video game, ultimately making learning a fun experience rather than a grueling one. 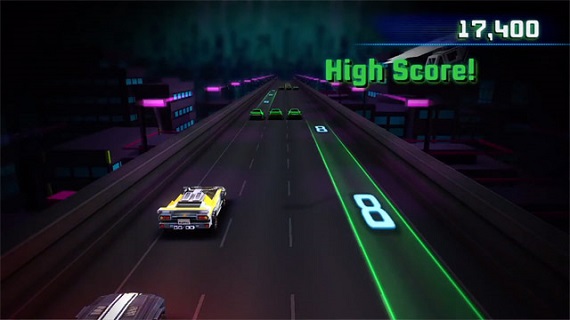 Those who enjoy an ensemble will be glad to find that the new Sessions mode is an attractive alternative to having friends that can play instruments (or friends at all, for that matter). You select your accompanying instruments, fiddle with the speed and key, and then close your eyes and become Stevie Ray Vaughan (if you have a basic understanding of scales, that is). While this mode isn’t something everyone will be ready for on day one, it’s an innovative addition that can be explored by even the newest of players and will in no time have you jamming in your bedroom.

The greatest thing about Rocksmith is surly that it can be fun for those who are accustomed to the devils axe, and just as enjoyable for newly hatched Claptonites, but some advanced players looking to hone their skills might have to look elsewhere. Sure, there’s fun to be had, but Rocksmith isn’t intended to be a replacement for all other avenues of learning, and caps itself before reaching any professional techniques. I suppose Ubisoft needed to give Youtube guitarists something to live for, but as a teaching tool, Rocksmith isn’t just an improvement over the last iteration, it’s an exemplary piece of software that should be in every aspiring musicians arsenal. It’s fun, it’s useful, and it’s beautifully crafted.

While technical hiccups are a shoe-in with any game as complex as Rocksmith, the ones found here don’t mar the experience much. Since every facet of gameplay has been given a nice thick coat of improvement in Rocksmith 2014, issues that the original title was known for have either been removed entirely, or overhauled beyond recognition. Occasional latency issues would be my only major complaint, but those problems are infrequent and can nearly be written off entirely. 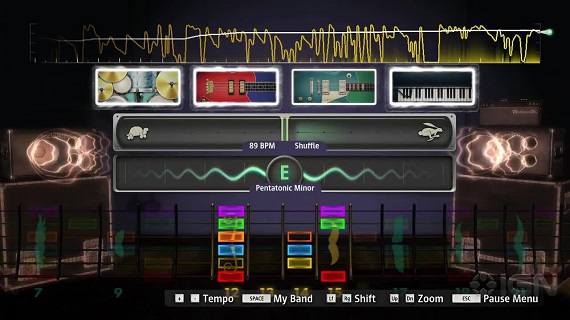 Before beginning my time with Rocksmith, I couldn’t play a guitar. Hell, I didn’t even know how to properly hold one (the guy at Guitar Center jovially assisted me). But after a few hours with Rocksmith, my skills improved in the sense that I was no longer a guitar-virgin, and had a basic understanding of the dos and do nots. I won’t be sitting beneath an old tree on some college campus reciting pretentious hogwash to a bunch of promiscuous socialites with my trusty 6 string any time soon, but I’ll continue to learn, and eventually advance beyond the help of Rocksmith, grow horns and dethrone Jimi Hendrix as the greatest guitarist of all time. If I ever find the time, that is.