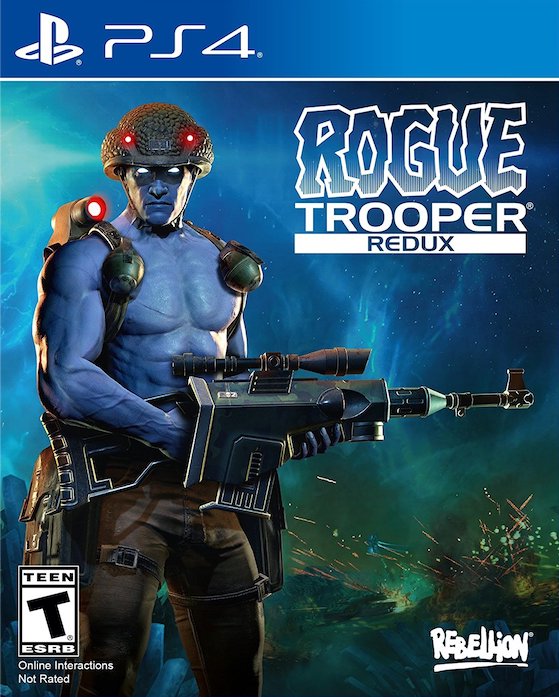 Back in 2006, Rebellion released a humble title by the name of Rogue Trooper. One of the early entries in the cover-based shooter genre, the title picked up what Kill.Switch put down and ran with it. Unfortunately, despite a license pulled from a popular 2000 AD comic and a budget price, it didn’t really do too well. The PS2, PC and Xbox title did pick up an audience through word of mouth as time went on, however, and it’s regarded as a cult classic these days. Over a decade later, the publisher has decided to give it new life with Rogue Trooper Redux. Promising improved, higher resolution graphics and sound, the publisher put Tick Tock Games on the task of bringing it to modern audiences. For the most part, the effort was successful, but there are som relics from the past that could have used a little more attention.

The story centers around Nu-Earth, a strategically valuable planet situated by a rift in space that allows for quick interstellar travel. Two factions vie for control, the Nazi inspired Norts, and the slightly less evil Southers. Things were getting rather rambunctious between the two, with the end result being the complete and utter poisoning of the atmosphere. In a world where nobody can safely breath the air without equipment, specially engineered troops were created by the Southers to create an advantage. Recognizable by their blue skin, these genetically engineered vat babies can survive the elements, and have received the training to be the edge needed. On their initial foray into the Quartz Zone, they were almost all wiped out. The remaining survivor is Rogue, a rather angry dude with a grim determination to figure out how exactly the surprise attack was flummoxed by the Norts. Fans of the comic will be very happy with the story told here, seeing as it stays very close to the source material. In fact, one could argue that this tells it better by virtue of not being forced to constrain itself to a handful of pages per pulp issue.

Fans of dumb humor will also be pleased. One of the advantages of these troopers is that, should they fall in battle, their consciousness is downloaded into a chip that can be cut out and installed in a piece of equipment until they can be put in new body. So it is that Rogue finds himself barely tolerating the constant inane chatter of Gunnar, who is installed in the gun, Helm, who is installed in Rogue’s helmet, and Bagman, who is installed in the backpack. How, considering that these call signs were given long before their circumstances, how is it that their names would end up being so on the nose? My theory is that they were named by a fortune teller with a cheesy sense of humor. It’s not out of the realm of possibility; 2000 AD is also the home of Judge Dredd, which uses these types of powers in its storytelling all of the time. Said designation denoting soothsayer probably cost the Southers a bunch of money. Between paying that person and the cloning vats, they couldn’t even afford to issue the troopers a shirt. Needless to say, the game is cornier than a Harvest Festival maze, and that’s okay. It’s part of the charm. 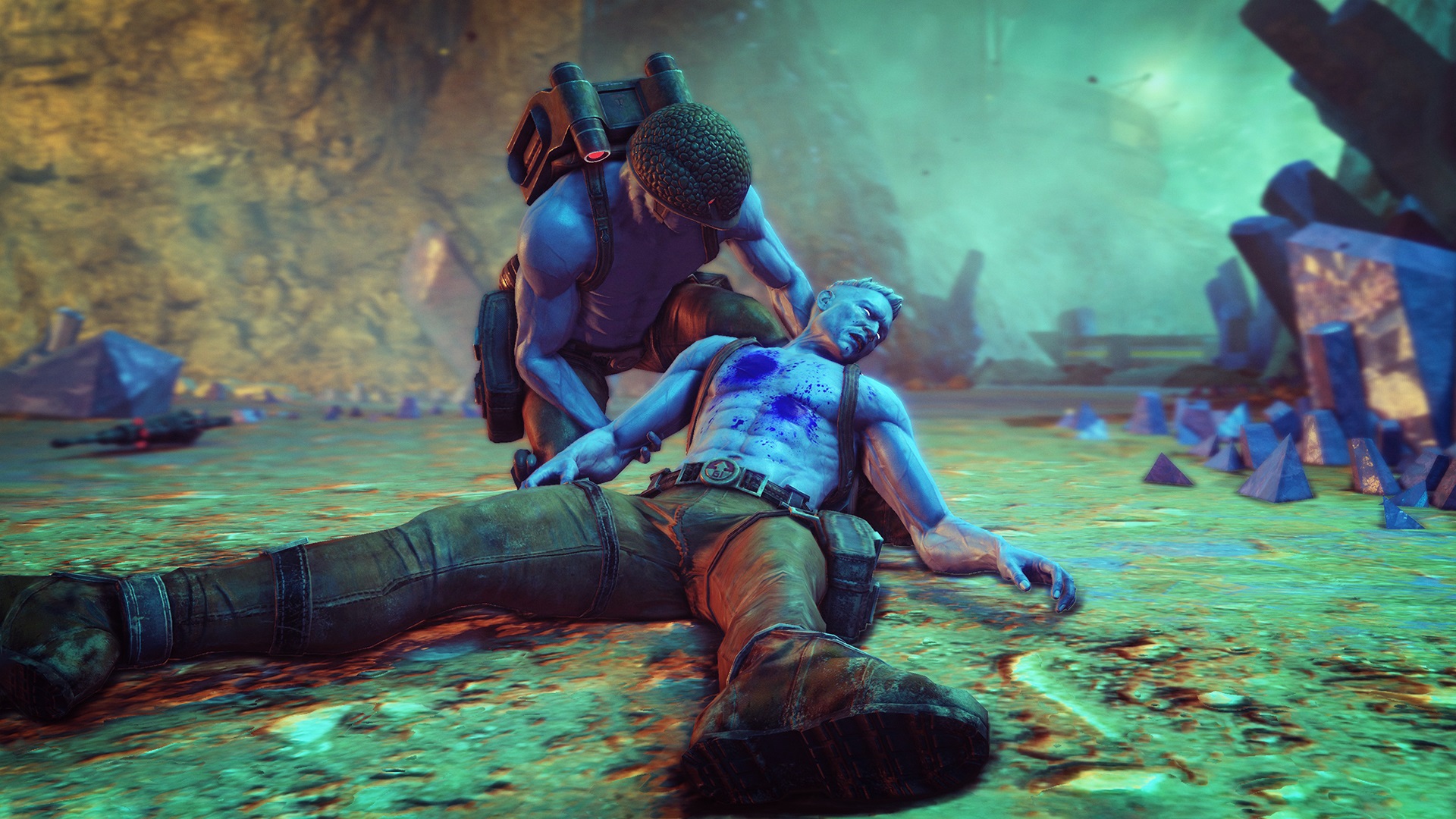 The gameplay hold up rather well, for the most part. As the game progresses, Rogue will be able to use all sorts of fun tools, such as hologram decoys, mortar launchers, and beam rifles, along with the expected sniper and assault weapons. Most of the situations have multiple ways of attacking them, based on the player’s preferred method of action. Sneaking around and stabbing is just as effective as full frontal incursions. The only issue with this design is that, once a preferred method is discovered, there is little need to pay attention to other options. Moments that subtly pushed the player to try a different plan would have been appreciated. (Notice the operative word “subtly.” Nobody wants forced stealth missions.)

There is a peculiar issue with the controls. First, Rogue sticks to cover automatically and doesn’t like to come out. Putting trust in the game to understand when cover is wanted and when it isn’t becomes an issue, with situations that leaves the player trying to get behind a wall and failing, or being unable to get out of a situation when flanked because the system really thinks that’s where the player wants to be. Also, reloading is done automatically, via Bagman plugging a new clip in whenever he wishes. This opened up plenty of opportunities where I waited for a moment to break cover, hoping the reload animation would start and end. When it doesn’t and I’m left with no choice but to move and shoot, the little arm pops out of the backpack and reloads, leaving me toothless. That Bagman, such a %^&*ing prankster. While this isn’t a particularly challenging game, my handful of deaths could be attributed to one of these issues.

The update is a bit mixed on the graphical front. Some of the cinematics seem like they didn’t see much work, while others are quite sharp. They all seem to be done in engine, though I could be wrong, so the disconnect is a bit odd. Simply contrast the opening scene of the invasion to the moment when the player takes control. The difference in quality is stark, with the in game stuff looking much better. Still, the art style means that even the best work on visual renovation isn’t going to make this the most appealing game. Due to the setting of Nu-Earth, the visuals are mostly brown and gray, with little to elevate the title past an overall feeling of muddiness. This really isn’t a criticism of the graphical touch up the game received. Fans would rightly scream bloody murder if the color palette was updated to modern sensibilities. However, people who are playing this title for the first time should be forewarned about the dreary appearance of this universe, and the bland military industrial settings. 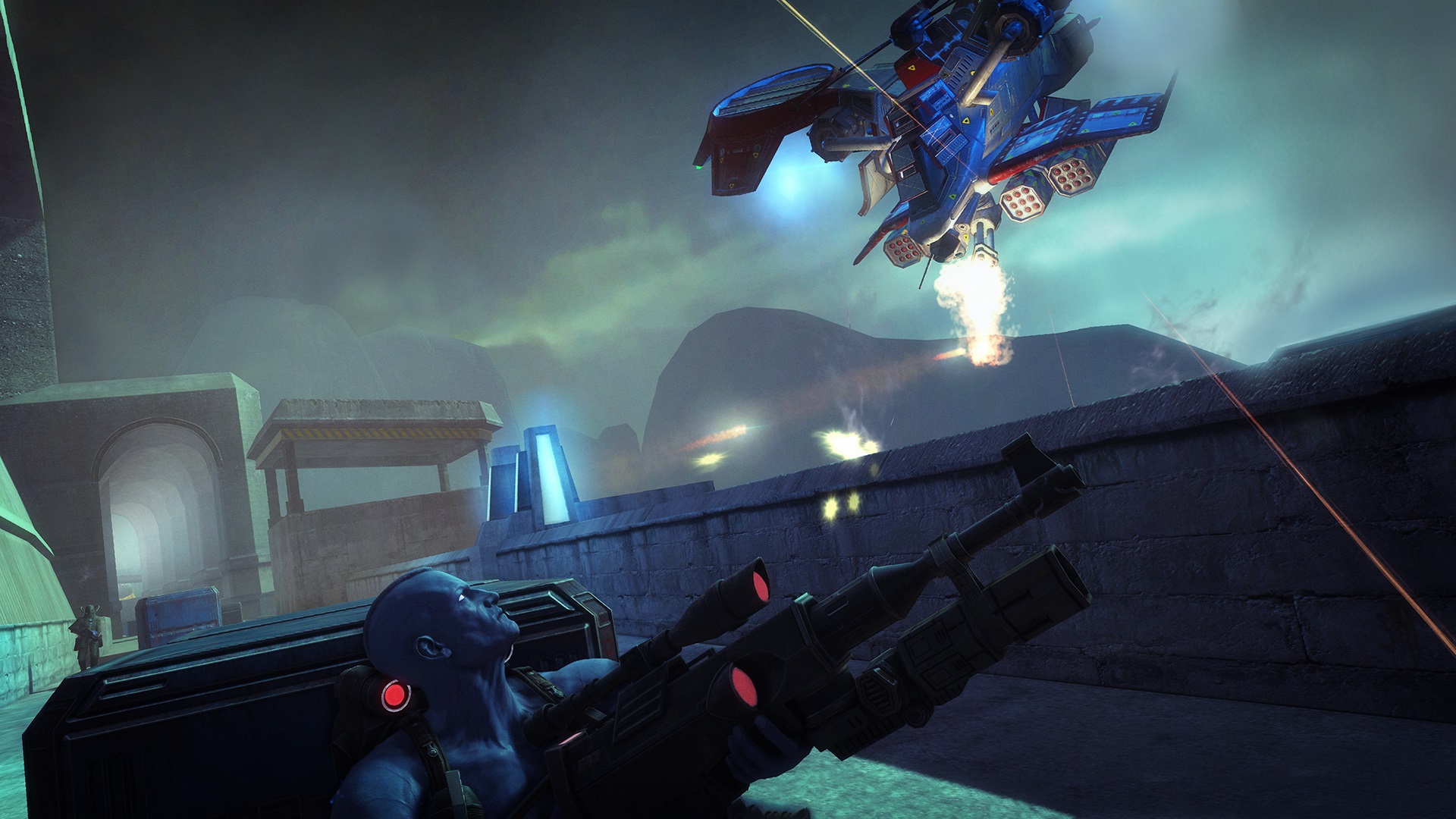 When all of the parts are added together, it becomes apparent that Rogue Trooper Redux doesn’t quite meet the standards of modern day gaming. Instead, this is simply an underrated classic with the dust of age knocked off. Instead of making a few quality of life improvements, such as with the controls, the powers that be were happy to keep the game as is. For fans of the original title, this is absolutely great. It still manages to be enjoyable when viewed with the understanding that this is an older title. When contrasted with other remasters that took some time to tinker with what wasn’t great the first time around, Rogue Trooper Redux comes up a little short. Seemingly simple items like improved use of cover and a basic reload button would have gone a long way towards improving the experience. For fans of gaming history interested in the evolution of a genre, this release provides some much desired context for the times. People looking for a top notch shooter should realize what they are getting into before they go on a tour with the militant version of Arrested Development’s Tobias.