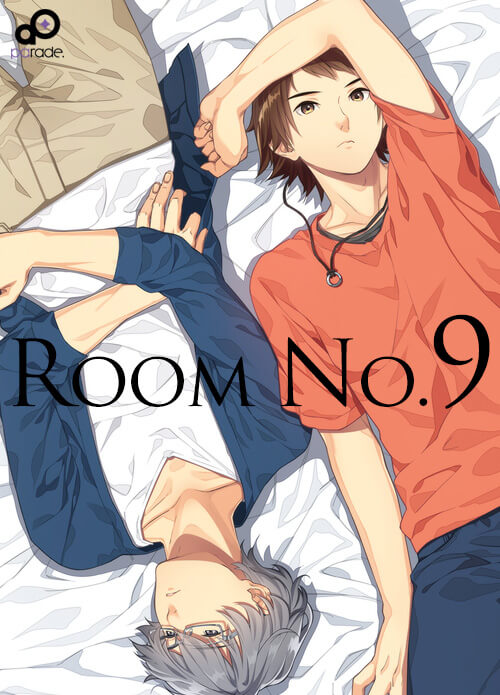 Visual novel publisher MangaGamer have been around for years and are increasingly willing to localize more niche genres as time goes on. In 2015 they published the boys’ love title No, Thank You!!! by Parade. Five years later, they’ve just released another title by the same developer: Room No. 9. It’s a bold choice by MangaGamer because this isn’t a game for everyone. Sure, some people won’t want to play a BL title, but there’s more to it than that. The plot of the game is extreme and not something that has a widespread appeal. With that said, those with a taste for darker material will likely get what they’re looking for.

Room No. 9 starts off like a normal visual novel before quickly shifting in an entirely different direction. We’re introduced to two characters — Daichi and Seiji. Daichi is a trusting, extroverted, happy-go-lucky guy who is too quick to rush into relationships with women. Seiji on the other hand is reserved. He’s extremely intelligent and doesn’t tend to goof off. It’s likely because of their differences that they became friends. The two have been friends since childhood and are still best friends at the age of 21. The two meet up for food and drinks and to discuss what’s new in their lives. This includes Daichi revealing he paid for a trip to Osaka for his girlfriend who just broke up with him. Thanks to Daichi’s misfortune, the two decide to use those trip tickets and hotel reservation for their own personal vacation.

Things go wrong, however, as soon as they board the bus that’s supposed to transport them to their hotel. Right after boarding, they black out and wake up in a hotel room. The two men quickly realize that something isn’t right about the room. Sure, it looks fancy enough, but there’s an LCD screen in place of the window and they can’t get out. As it turns out, the two have been non-consensually enrolled in a study of human behavior. The only way to exit the hotel room is to complete the study. The study provides a task each day. Completing a task awards their group 10 points. After 100 points, they’ll be free to leave. 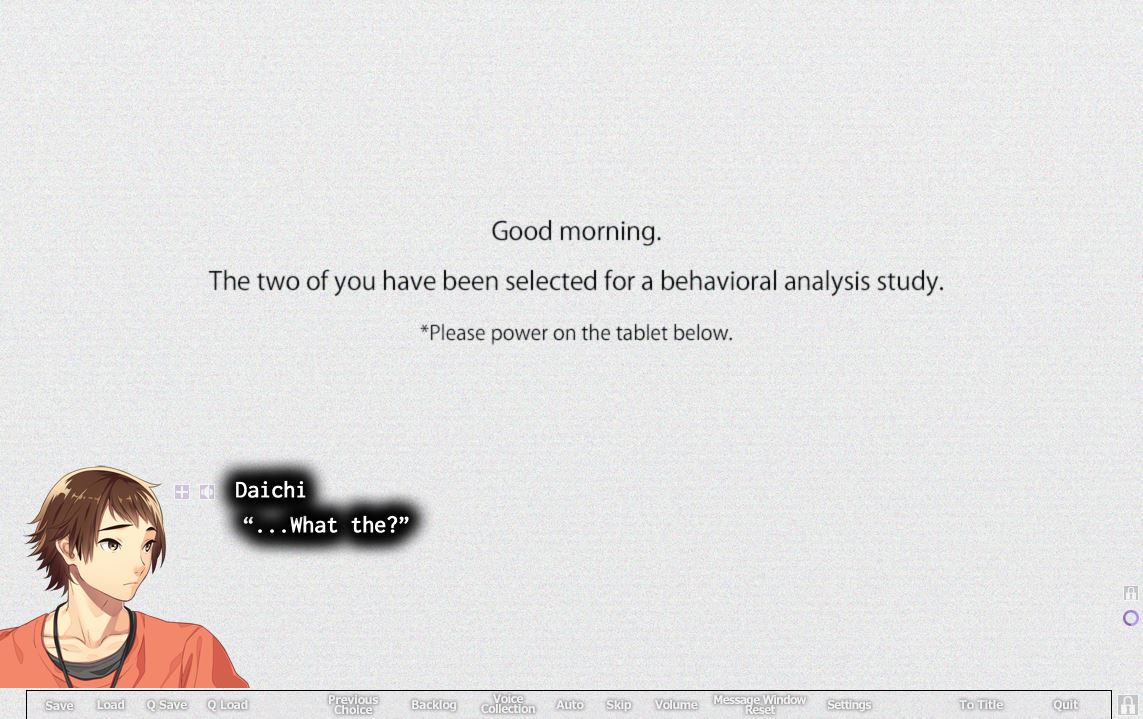 This could be super easy or awful depending on the tasks. Unfortunately, it seems the study took notes from Saw. Tasks include Seiji physically harming Daichi in increasingly dramatic ways. On the other hand, the two might be forced into sexual activity with each other. Despite being friends for so long, their relationship never crossed into sexual or romantic territory before and both men have only had relationships with women. As the story proceeds the player must choose what tasks to perform and watch how the two characters react. As stated earlier, this is clearly not a plot that will sit well with general audiences. With that said, it’s also not perhaps as extreme as some may have been led to believe. It’s nothing compared to parent company Clock Up’s other game Euphoria. Either way, it’s still absolutely an 18+ rated game for adults.

It takes no time at all for Room No. 9 to go from cozy to straight up psychological horror. The “horror” in this case isn’t spooky ghosts or a deadly virus. It’s simply the terror of being forced into carrying out tasks on your best friend that you would never do otherwise. The horror isn’t supernatural — it’s entirely plausible. While playing, expect to question yourself as to whether you could do the same things in Daichi and Seiji’s situation. For example, could you cut into their arm as part of a sketchy study? The game explores how being taken to these limits may strengthen, strain or utterly destroy a relationship. 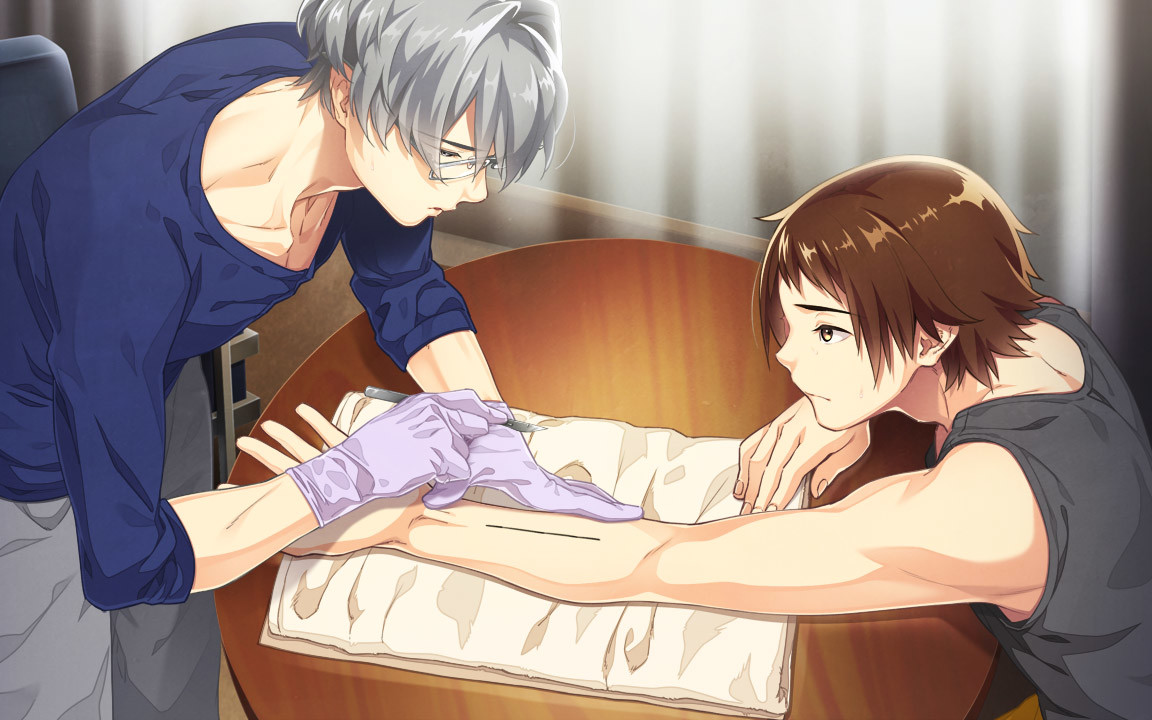 Fortunately, the psychological horror doesn’t indefinitely continue. Beating Room No. 9 once takes around three to seven hours. Fully completing all the endings just adds a few additional hours onto that total. There are six endings in all. Each showcases a different potential conclusion for the duo. Do they escape, and if they do, what are the long term effects of their trauma? Each ending provides a glimpse into different ways their lives might play out. Expect a lot of sad endings, though. This is a game where there isn’t just one bad ending and one good ending. In fact, some may consider that none of the endings are actually “good” ones. It’s also a shame that none of the conclusions provide any explanation for certain aspects of the story.

The art in Room No. 9 is excellent. There’s also the ability to toggle certain art features on or off. For example, there’s a blood toggle because there’s some blood in this game. If you can’t handle that then instead you’ll see a black screen with the description of the scene below. Similarly, there’s a toggle for scat because that element does make its appearance as well. If toggled, the CG will still display with that element erased from the scene. The music is well suited to the scenes, and both protagonists are voiced in Japanese. Their acting captures the extreme stress and dread extremely well. They clearly put their all into making the scenario feel realistic. 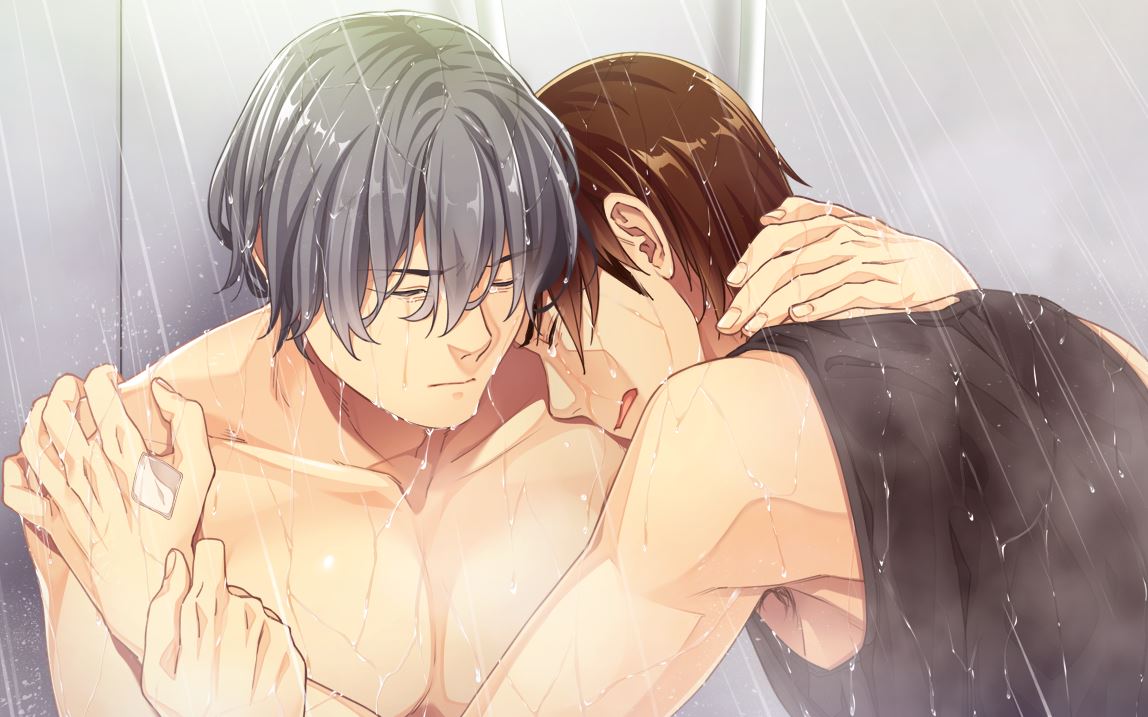 Room No. 9 excels with its extremely novel, and frightening, concept. Thanks to setting up Daichi and Seiji’s relationship right at the start, readers care about their unbelievable situation. Despite the concept, it never gets too outlandish with regards to violence. The short playtime isn’t an issue itself, but a few too many of the same tasks take place in every route. It would’ve been great to see each route offer a lot more variance than is actually the case. Regardless, Room No. 9 makes an impression and is a visual novel that will sear itself into players minds for a long time.