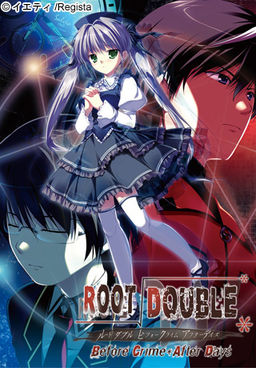 There are visual novels out there which are the equivalent of a quick read and others which require far more attention and devotion from their players. When hopping into Root Double -Before Crime * After Days- Xtend Edition, there’s little chance to assume the story will be particularly light or speedy. After all, it begins with a serious bang. The very first sequence features near-future Japan on the verge of a horrible crisis. Their superbly high tech nuclear research facility, LABO, has just suffered multiple simultaneous explosions and the nuclear reactor is in the process of a meltdown. With such a serious start to the tale, it’s hard not to get immediately involved in the storyline and stay hooked for the multitude of hours, surprises and paths which come next.

It’s an interesting concept to center a visual novel around. Although Root Double -Before Crime * After Days- is a few years old at this point, it did originally launch in Japan after the Fukushima Daiichi nuclear disaster in 2011. Bearing this historical moment in mind, one might actually initially dismiss this game as a purely reactionary piece. As it turns out, the storyline delves into a lot beyond the concept of a nuclear disaster, though saying too much about where it actually veers off would be a total spoiler. Route After (effectively the first storyline new players should read) showcases the precarious situation of people who have been trapped within LABO after its security measures to prevent nuclear leakage have gone into effect. There’s no way for this group to leave – and their time is short before they succumb to the deadly effects of radiation. Players assume the role of rescue worker Watase as he attempts to keep everyone safe, and possibly more importantly, sane. Suffice it to say that there’s not much levity to be found throughout the twenty or so hours spent reading through this path.

Then there’s Route Before. Despite being named “Before,” it’s really best to play this one directly after beating or completing After. This is because it showcases what happens before LABO’s meltdown. It’s in this path that readers discover more about some of the other survivors trapped within the facility, as they’re not given much focus in After. Though this section drags at points, it also helps to establish interest in this group and actually care about their perspective on the whole tale. Beyond these two routes there are also Route Current, Double, and Xtend Episode. These are in addition to the good and bad endings uncovered throughout each path which relate to specific characters. While it may not be necessary to complete the entire game to enjoy it, it’s challenging to simply leave the story as is after finishing After and Before. 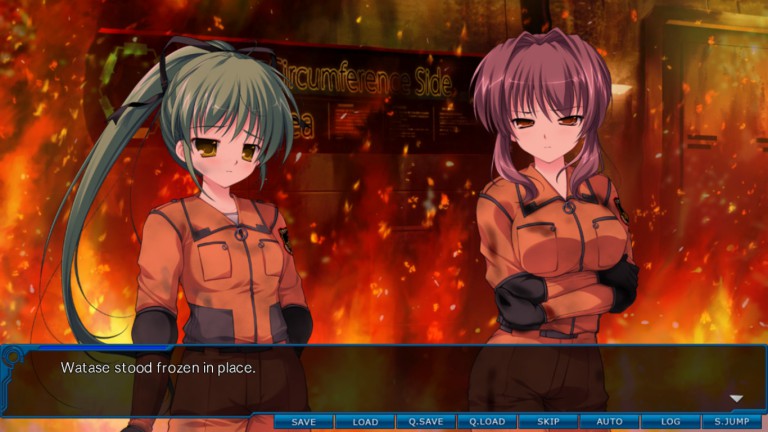 This is simply because the writing keeps key aspects of the story as tantalizing secrets. They’re simply too intriguing to leave as a mystery and require going through each and every route to see the whole thing through to its conclusion. As should probably be apparent, Root Double -Before Crime * After Days- is an outrageously long visual novel. Sure, it may not be the most reading-intensive ever conceived, but it will still likely take most folks over sixty hours easy to beat the whole thing. Total completion time should go even longer than that. All characters are voiced in Japanese, including protagonists, and the writing itself is skillful enough to keep folks engaged. While I’m not about to suggest that the hours simply fly by while reading, they do seem to speed up by around the halfway point once there’s a greater understanding of the main characters and the events surrounding the LABO incident.

As far as presentation is concerned, Root Double -Before Crime * After Days- also deserves praise. Character sprites look professional with their anime styling and exciting CGs heighten the intensity of the overarching drama. Although scenes are not animated, there are animated effects and sprites themselves move their mouths to mimic talking. It does not feel that there are a ton of songs on the soundtrack, but that may be due to how many hours of music a player is exposed to throughout a playthrough. Luckily, most tracks are excellent and provide a great way of keeping the mood tense or light as required. 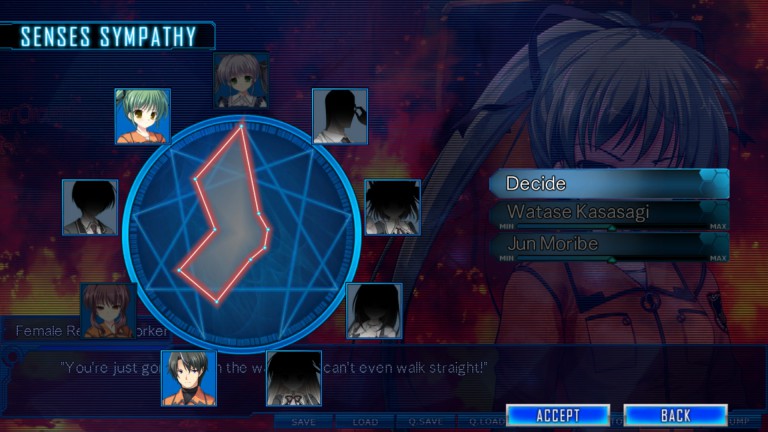 There is one huge caveat to all this and that is the gameplay itself. As with many visual novels, you’re given the opportunity to make choices which affect what happens next. Root Double -Before Crime * After Days-, however, is special in that it uses “Senses Sympathy System” (SSS). This ridiculously-named feature occurs often. Basically, when it comes up, you can choose to rate the protagonist’s feelings towards other characters on a sliding scale. Rate them highly and you’ll have good feelings about them, while a low rating suggests the protagonist really isn’t digging them. Although there are nearly ten rankings to be had, only three really matter (high, middle, low) and many choices only very slightly impact a line of dialogue or character affection. They’re important when trying to get a certain character ending, but for the most part, first-time players only need to fuss about not getting bad endings with poor SSS choices.

Some enjoy this feature, but others find it to be an annoying obfuscation of typical visual novel dialogue choices. After all, it’s effectively just three choices each time, and provides much the same effect in a less than obvious way. Besides, unless you’ve got hundreds of hours to spare, it eventually becomes grating to be forced to guess which is really the right way to respond in each situation. Bad endings do provide hints of how to act to avoid them, and auto saves are quite generous to compensate for design issues with the feature. Still, a guide is definitely recommended for those who value their time and want to mainline their way to good endings. Much later in the game there is another wrinkle added to SSS which makes it a tad bit cool. It comes too late to really change anyone’s opinion as to whether they like the basic system or not, though. 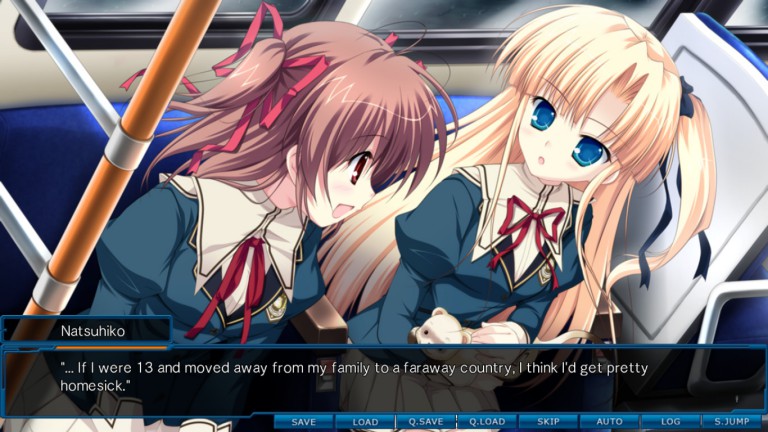 Root Double -Before Crime * After Days- is an incredibly surprising visual novel in that it manages to tell a dramatic tale in a way which never comes across as ham-fisted or particularly childish. Characters may at first seem a little simplistic, but grow on you as the story focuses on them to reveal other facets of their personalities and backgrounds. As mysteries are resolved — and as others continue to lurk in the background — it becomes nearly impossible to turn the darn game off. The biggest letdown is the highly-touted SSS which feels like more of an annoyance than clever new gameplay feature. Honestly, it would have been far better without nearly as many interruptions, but that’s a complaint which in no way impacts how awesome the storytelling itself is. Anyone looking for a surprising visual novel to play for hours on end should invest in Root Double -Before Crime * After Days-.