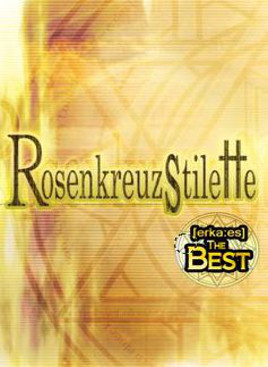 2016 was the year we were supposed to see the second coming of Mega Man in his new form Mighty No. 9. Unfortunately, this false prophet only succeeded in making those anticipating Mighty No. 9 cry like anime fans on prom night, and was clearly not an awesome game for people who like awesome things. In shadows behind Mighty No. 9, a game called Rosenkreuzstilette was silently preparing itself to be unleashed onto the western world (originally released in Japan in 2007), attempting to complete the difficult challenge of becoming a worthy successor to Mega Man or at least completing the not so difficult challenge of being better than Mighty No. 9.

To say that Rosenkreuzstilette shares elements of Mega Man or shows an influence would be a gross understatement. A plausible origin story for Rosenkreuzstilette would be that someone managed to steal the code for the currently nonexistent Mega Man 11 and reprogrammed the Blue Bomber into a magic using anime woman and converted the eight evil robots into other magic using anime women. NES era Mega Man rebooted with an all female anime cast could be the entire review, but Steve has implemented a strict corporal punishment system for writers that do not use enough words so we will discuss Rosenkreuzstilette in greater detail.

The premise of Rosenkreuzstilette centers around people known as Magi who are able to use magic. The Magi were persecuted by the Holy Empire and Orthodox Church as these institutions tend to have a history of not getting along well with magic users. A great Magus and his eight disciples stood up against the Holy Empire and Orthodox Church and even though the battle ultimately resulted in the death of the Magus, the Magi were accepted and eventually were given their own elite fighting unit known as RKS, Rosenkreuzstilette: the Blades of the Rose Cross. 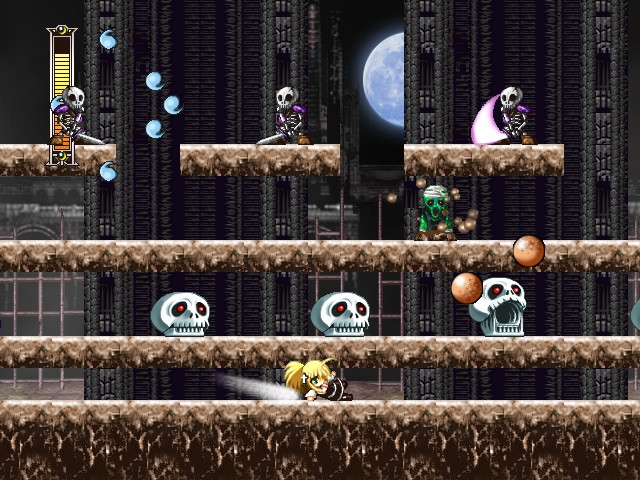 If everything was hunky dory and this resulted in the undisputed resolution the Magus died for there of course would be no game to play. Several decades later, protagonist Spiritia Rosenburg (aka Tia) and her friendly fairy companion Lilli were returning after some extended training. On orders from Count Zeppelin, Tia was on her way to visit his daughter Iris when a dragon decided to crash the party and fly away with Iris. The training hall is now under attack and Tia discovers that her friend and fellow member of RKS Freudia Neuwahl is behind the attack, and that the other members of RKS have started an uprising against the Holy Empire and Orthodox Church. Unwilling to join, Tia finds herself battling the other Magi members RKS.

Rosenkreuzstilette begins with a brief prologue scene before throwing the player straight into old school run and gun platforming. The phrase NES hard is an apt description of the punishment this game will dish out to the player. Quick reflexes are important, but like a lot of the classics that is only half the equation for success when memorizing the patterns of a disappearing blocks or a boss’s attack routine are just as important. Rosenkreuzstilette does not hold the player’s hand by any means, and while things can get frustrating at times perseverance will prevail in the end. 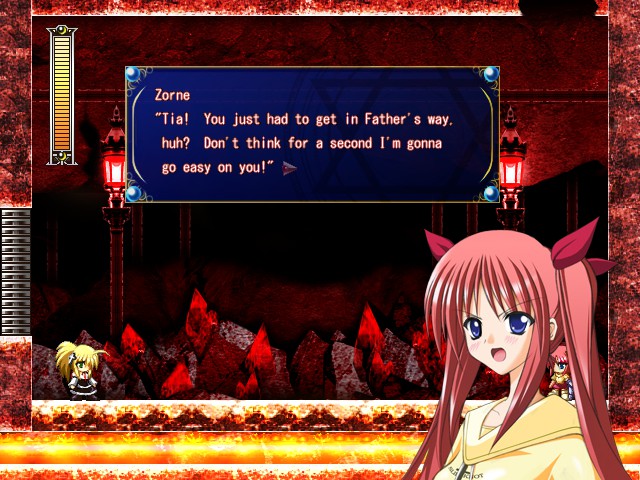 Rosenkreuzstilette’s levels are filled with old school platforming bliss. There are plenty of enemies that respawn if you retreat from the screens that are also filled with spikes of instant death and bottomless pits. Environmental hazards also impede progress in the form of fans, rotating platform spikes, disappearing and reappearing blocks, and sections of the floor that just disappear under your feet to name a few. The beauty of this design comes from the fact that very rarely do these deaths actually feel cheap and they encourage the player to just get better at the game. Being careful does have its advantages since unlimited respawns have no place in Rosenkreuzstilette, it’s back to the old fashioned three deaths and back to the continue screen. Rosenkreuzstilette is not a terribly long game and can be completed in a couple hours if the player knows what they’re doing.

There are a couple different modes that add replay value to the title. Story Mode and Arcade Mode are both available from the start, and the main difference between the modes seems to be that Arcade Mode omits all the unskippable dialog sequences that tell the story. Completing the game unlocks a new mode where the option to play as Grolla Seyfarth is unlocked. Playing as Grolla does offer a different experience since her perspective on the story results in it being told differently, and she plays differently than Tia. Grolla is more powerful and is armed with a sword for melee combat, plus she can cling to walls and do dash jumps. 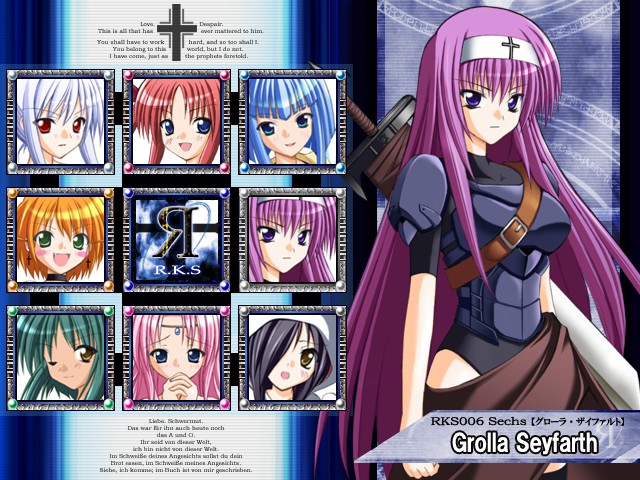 Graphically, Rosenkreuzstilette looks like a typical modern retro title in that the influence is very apparent and is going for the style of older games but has a high enough resolution where things don’t get too pixelated. Some of the backgrounds look much more realistic than the cartoon character designs but this isn’t a bad thing, overall this is a pretty nice looking game. The soundtrack is a high point as well, sounding like a modern take on retro game music with a bit of gothic flair. The controls are fairly simple and thankfully responsive, so repeated deaths can’t be dismissed on bad control response, though it would be better if there was an option to use the D-pad instead of being forced to use the analog stick. The analog stick is a godsend for 3D games, but the D-pad just feels better for 2D platforming.

As implied throughout the review, Rosenkreuzstilette is a shameless Mega Man clone (with a dash of Castlevania seasoning), which is up to the individual player whether this is good or bad. The addictive gameplay from Mega Man games is successfully recreated in this title, but the influence is not remotely subtle. Many enemies are essentially reskinned critters from Mega Man games and they even have a similar artistic design, such as helmets that rise up momentarily to fire three bullets at the player, and there are some bosses that will definitely conjure up feelings of deja vu. The death animation and sound are obviously lifted from the Capcom games, along with the slide maneuver and charge blast. After the prologue there are eight stages to tackle in any order the player desires, though each stage nets getting a new special attack from the boss that is weak against another adversary, and these special weapons come bundled with hair dye and a familiar looking password screen. The classic Mega Man games are great so using them as a blueprint can lead to a good game, but if originality is important Rosenkreuzstilette’s game play will not score many points in this area as it heavily blurs the line between homage and rip off. 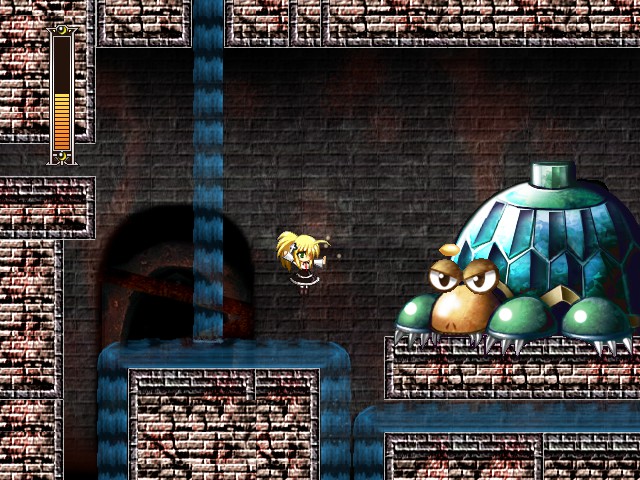 It would be easy to criticize Rosenkreuzstilette for copying so much of its content from Mega Man games, but that is what makes it so enjoyable. There have been many games that try to piggyback on more successful franchises on a superficial level but completely miss what made the source material so great. This is a blatant Mega Man clone, but it is a clone that was properly done. Rosenkreuzstilette creates an original story, characters and world, and puts on top of Mega Man’s gameplay. Unless you are someone who hates game clones strictly on principle, Rosenkreuzstilette is a great time and a must play for fans of the Blue Bomber. It sounds like an oversimplification, but this game is Mega Man redone with an all female cast in a fantasy world.