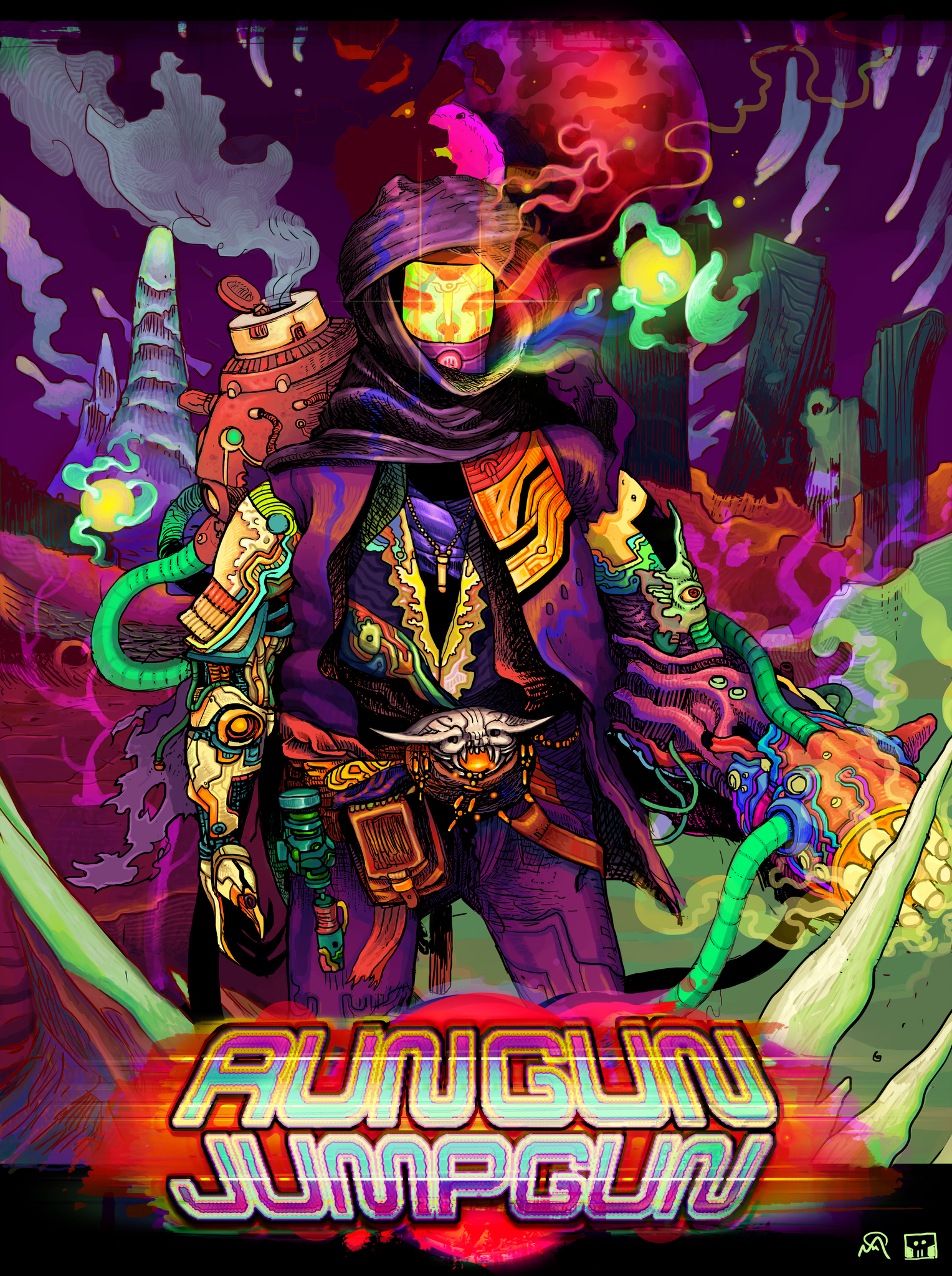 Shoot down, shoot forward, die, start again. And a few dozen more times after that, learning the nuances of each level while getting mad at yourself for repeating the same mistakes, but getting a little bit farther until the current micro-level falls due to a combination of growing skill and pure bloody-minded determination. There are a total of two buttons to play with, no gamepad input at all and the simplicity of the controls feeds into the surgical precision necessary to not just survive RunGunJumpGun but reap a harvest of the collectible atomics that are so temptingly placed near certain doom.

RunGunJumpGun has ten semi-friendly levels to get started with, easing into its action with helpful checkpoints to get you up to speed. A helmeted scavenger wielding a chaingun runs along at a set pace and can do one of two things- fire down, or fire forward. The gun shoots in a constant meaty blast no matter which way it’s facing, and while firing forward clears out anything in the way after a few hits, the recoil from shooting down sends the scavenger flying into the air. This is where things start getting tricky.

Each level of RunGunJumpGun is maybe fifteen to twenty seconds long, if played successfully. Successful play is a combination of learning the hazard placement and mastering the speed of rising and falling, with special attention paid to both initial acceleration and hang-time before gravity kicks in. The gun’s recoil only takes effect when shooting down, and the zippy forward auto-scrolling maintains the same pace no matter how furiously the gun is pushing against it. Mastering a level means developing a near-instinctual sense for the scavenger’s movement, and while just getting through may only be difficult, getting a full set of the atomiks can be brutal. They’re sitting right there, though, and if most are relatively simple that makes the outliers placed at the edge of a spike, near spinning sawblades, or in the path of swarm of fireballs that much more tempting to chase after. 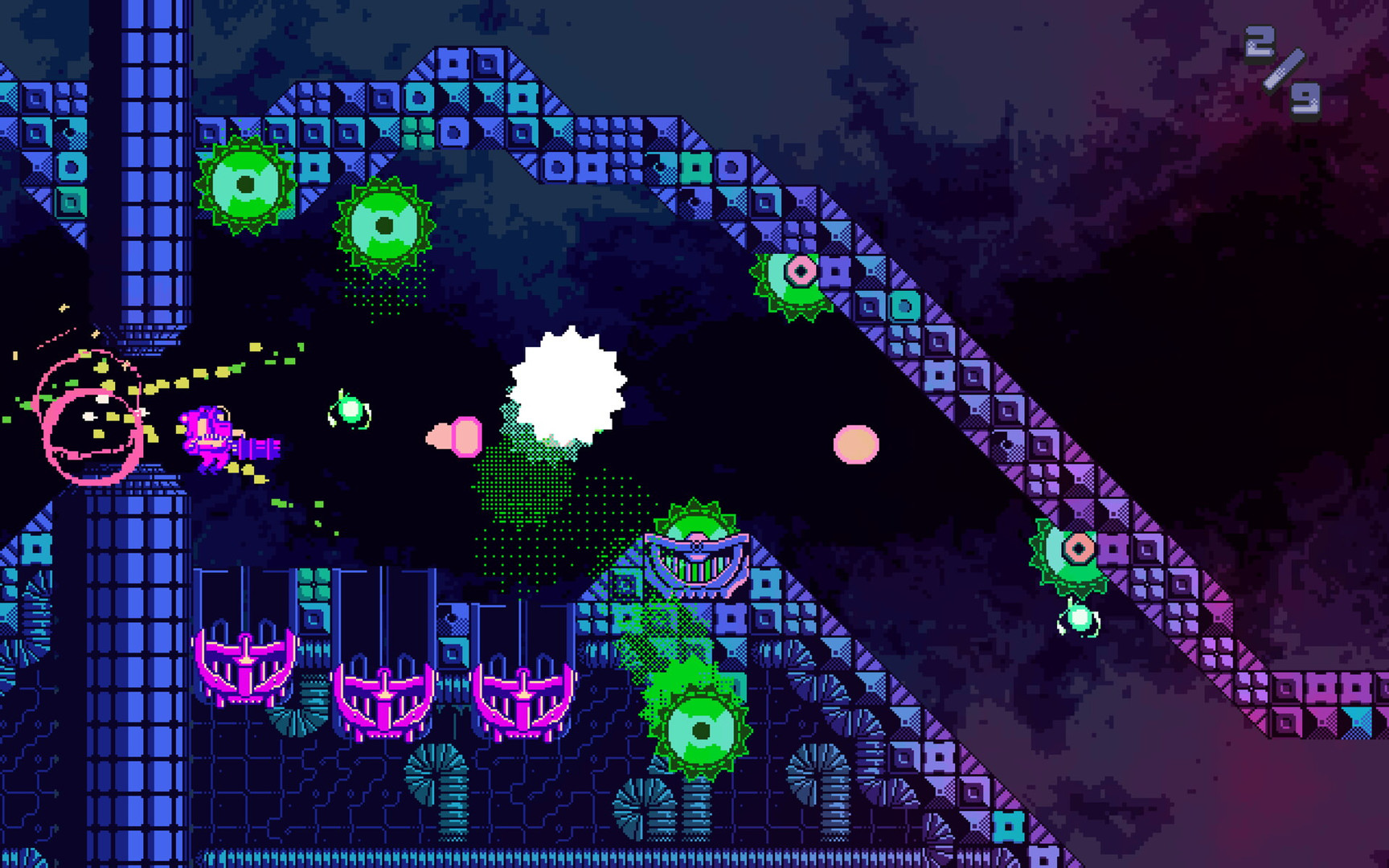 This is where RunGunJumpGun gets properly evil. There may only be eight to twelve atomiks in a single stage but the level design wrings every drop of gameplay from the scavenger’s movements. Spiked corridors rise and fall at different angles, requiring a specific tempo on the shoot-thrust button to not only maintain a safe path but also snag the atomiks that aren’t so polite as to hover safely in the center. Another level will have barrels blocking the path, requiring you to time out a precious quarter-second of hang time to shoot a few bullets forward, blasting them away so you don’t get pushed off the back of the screen. Energy barriers with the emitters on top or bottom (or both back-to-back) are instant death unless destroyed, enemy ships fly in weaving patterns, gun emplacements fire walls of flame diagonally across the screen, flamethrowers are made of hatred and spite, etc. There are a million ways to die and every single one is perfectly placed to take advantage of an imperfect use of your machine-gun thruster.

The scavenger can only take a single hit before being rocketed back to the start of the level, and the checkpoints that were so nicely provided in the first few levels don’t stick around long.  Fortunately there’s no limit on the life stock, although the game keeps count of how many times you’ve died per level with a running total at the title screen.  It’s possible someone has beaten the game with fewer than 1,000 deaths but it doesn’t seem likely.  Death is only a mild inconvenience, though, thanks to both the short levels and near instant auto-restart.  Taking a hit doesn’t pop up a menu asking if you want to restart, but rather sees the scavenger dragged across the level to try again, and again, and again over and over until you get it right this time.  While that’s only a small change from normal it’s an important one, turning each death from an obstacle to progress into just another part of clearing the level.  The seamless flow of the action prevents the incredible difficulty from getting too obnoxious, leading to far more patience in attempting another round, as many as it takes, until each level is met with a hard-won victory.  It may be very tough but never unfair. 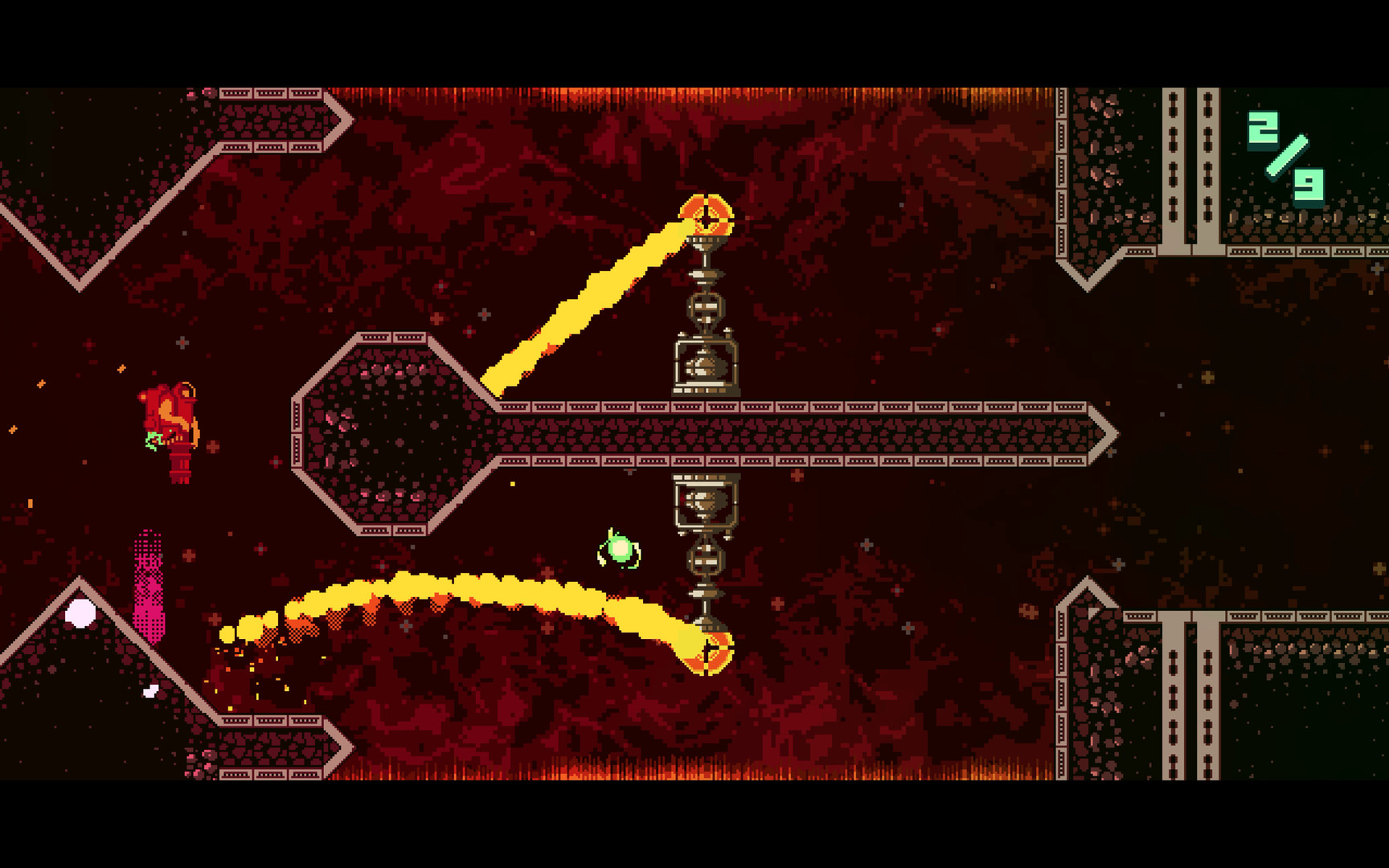 RunGunJumpGun is simple arcade action taken to its extremes.  The basic controls don’t get in the way of the gameplay being run through endless permutations, with each of the 120+ levels giving a new challenge distinct from the previous ones.  Certain set-pieces may be recognizable, like a series of mounted guns shooting a wall of fireballs diagonally across the corridor, but the actions needed to survive are only rarely repeated.  Each of the three main areas even has its own signature style, with the first set of 40 levels being normal, the second set letting you rise through the ceiling and up through the floor, and the last planet having water levels that make the gun shoot up, sinking you down.  There’s an incredible amount of variety in the design, far more than one would imagine possible from a two-button game, making it hard to stop playing because you know there will be something clever and mean in the next short level.  Even the difficulty is properly varied, with a level that might kill you 25 times without breaking a sweat followed by one that only takes ten to twelve lives to sort out.  Shoot down, shoot forward, die, and start again.  You’ll succeed eventually and the brief moment of victory will be a nice break before the next level finds a new way to test your ever-improving skills.