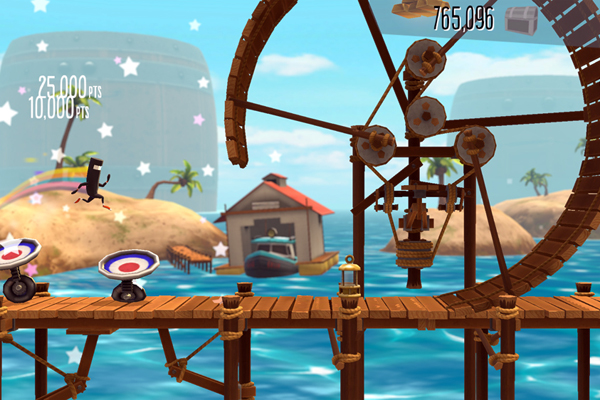 The Bit.Trip series has been a strange one, combining music/rhythm gaming with an Atari 2600 vibe. The first game was Breakout, the second was techno-Pitfall, etc. They combined simple gaming with brutal difficulty and a great beat, and the retro-70s aesthetic gave each one a distinct look. The Bit.Trip series may have come to an end with Flux, but Commander Video has returned in Runner 2: Future Legend of Alien Rhythm. It’s an all-new look coupled with a more forgiving difficulty level, and easily the best in the series so far.

Runner 2 takes the gameplay of Bit.Trip Runner and gives it a makeover. Commander Video runs left to right automatically, and you need to jump, slide, and kick your way to the level’s end while collecting the gold along the way. You don’t technically need to get all of it, of course, but it’s hard to resist the urge for perfection, especially when the world map shows which levels have been cleared perfectly and which haven’t. Unlike Bit.Trip Runner, the item placement is designed to be challenging rather than maddening, so collecting everything feels like doing the job right. 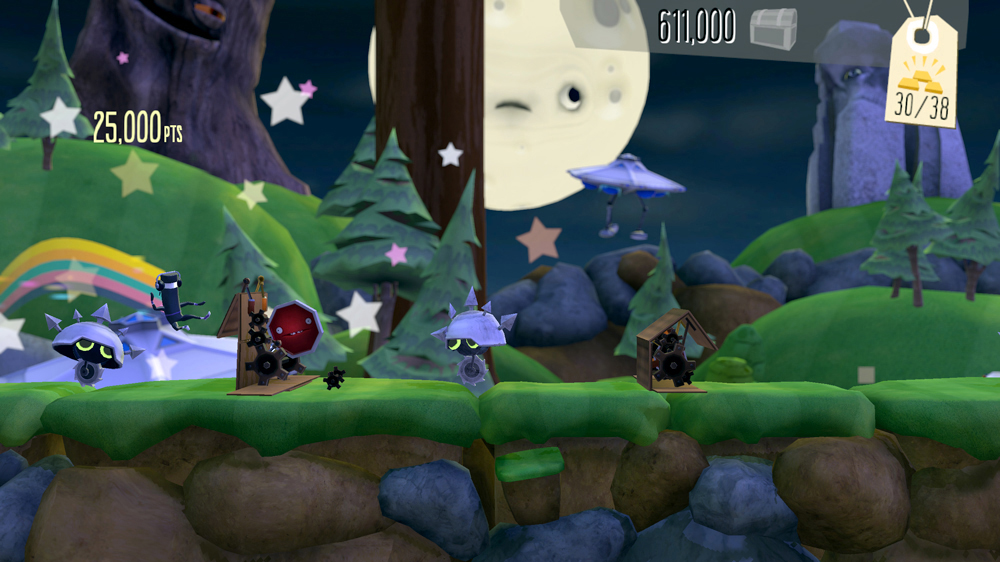 Each level follows roughly the same format. You start with a few warm-up obstacles, collect gold along the way as things get more complicated, and midway through there’s a checkpoint you can either run through or jump over. For practicing levels it makes sense to use the checkpoint, but there’s a nice bonus for surviving without it. Each level is exactly the same every time, so the trickier areas can be more about training muscle memory than exercising the reflexes. Jump an obstacle, jump again to get a gold in the air, come down in a slide to go under a fireball, and then jump-slide through a tiny gap in mid-air. It’s hard the first five or six times, and then you just glide on through.

Learning the timing is helped by Runner 2‘s music, because all obstacle placement is set to the rhythm. The music starts off as a basic beat, and there are four red crosses throughout the level that fill in the audio details as they’re collected. Moving past an obstacle also adds a beat to the rhythm, so sorting out the timing on jumps and gold collection is as much about knowing the rhythm of the music as it is looking at object placement. Just hitting the jump button doesn’t make a noise, but clearing the spiky ball gives a tone exactly as you pass over it. The game is still more platformer than rhythm game, but the obstacles become the musical notation of the level’s song.

While the music fits in perfectly with the gaming, the new visual style is more of a mixed bag. There’s still a 70s look to everything, but the Atari 2600 style has been replaced with a blockier aesthetic that’s ripped straight from a modernist 70s textbook cover. It’s only seen in cut scenes and between-level art, and the best that can be said is that it’s visually interesting. The in-level art comes across a bit better, but some of the designs for the playable characters aim for wacky but end up hideous. One of the first characters you unlock is a running pickle. Some branching paths have treasure chests with alternate outfits, so if you want to scar your eyeballs you can dress up the pickle in hayseed overalls. Seriously, why would anyone do that!? Just because the character design is an intentional nod toward horrible art doesn’t make it any less horrible. 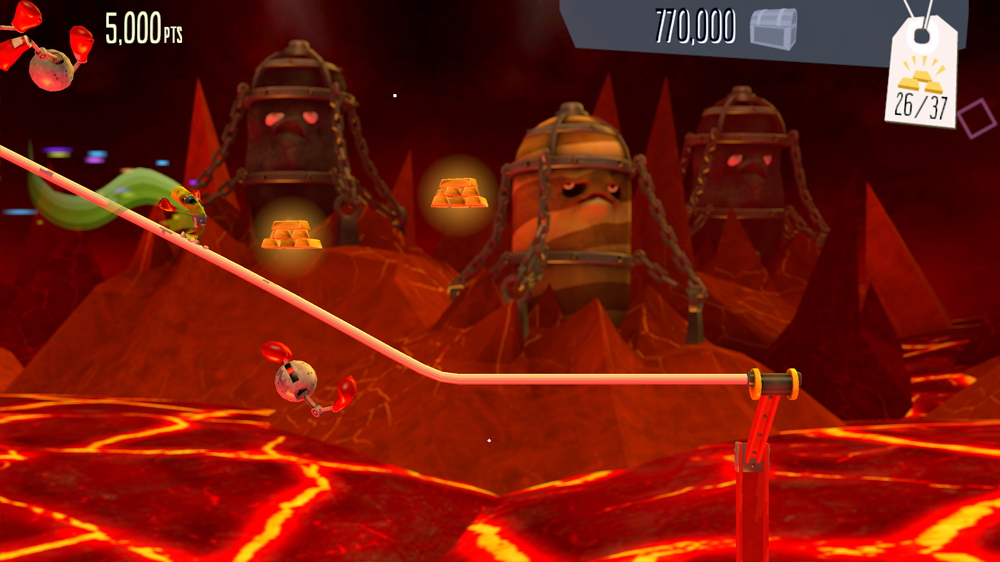 If you stick with the original runner or his female counterpart, don’t mind a bit of iffy 70s-throwback art, and can forgive the repetitious level backgrounds, the actual running/jumping/sliding gameplay rapidly gets under the skin, demanding more and better play. Miss a single gold in a long line of complicated jumps? You’d better believe that’s a quick suicide and a retry, no matter how controller-shatteringly frustrating the learning experience has been so far. Thankfully, a crazy hard level is usually followed by something a bit more reasonable, and if you’re utterly stuck, there’s no penalty for dropping down a difficulty level just to get past a particularly troublesome spot. Other than that creeping sense of failure that pushes you to go back and try again, that is. How much you get out of the game is frequently down to how much you enjoy practicing something until you get it right, but once you’ve soared through a brutal series of obstacles like an untouchable ninja-god, it’s almost impossible not to dive straight into the next challenge. The music and platforming combine to make a compulsively playable ride, and there’s no stopping until you’ve mined every single chunk of gold and hidden item from every one of Runner 2‘s near-endless supply of levels.