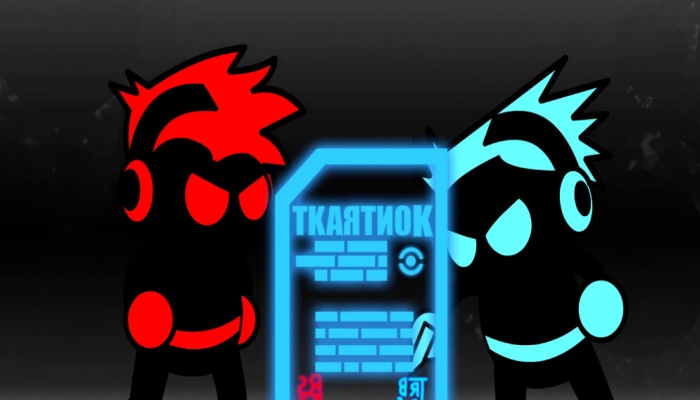 If Super Meat Boy and Jet Grind Radio had twins, they would be the Rush Bros. This precision platformer starring two feuding brothers doesn’t just test your jumping skills, but does so while throwing a ton of bright colors at you and using an awesome soundtrack to make every death seem like a good thing. While you may want to be frustrated as a gamer, as a person, you can’t help but be glad since it lets you listen to more music! It’s a brilliant way to make a game fun at its most challenging moments. 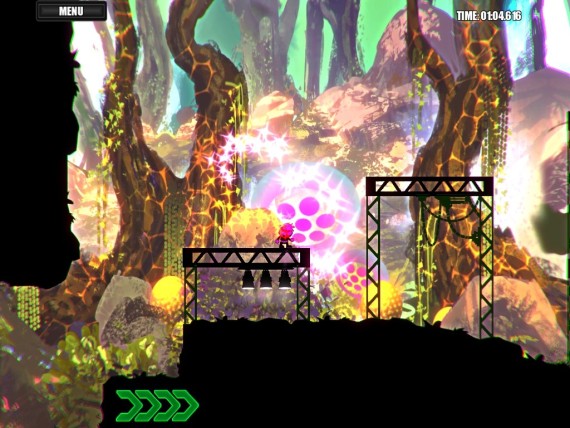 Its classification as a racing/platformer may seem a bit confusing at first, but when you play the game, the term makes a lot of sense. Rush Bros. is a time trial-focused game with a side focus on beating stages with as few deaths as possible. Obstacles in your path aren’t just the usual platforms, springs, and spikes, but also things like rock-out stations that require rapid button presses to get through quickly or else you’ll add precious seconds to your time. When playing by yourself, the game is a fair challenge and you can just go through in a leisurely manner and improve bit by bit at your own pace. The real challenge comes from accepting challengers ala a fighting game where folks can request a race with you and you’ll instantly go to the area they’ve selected for something different.

Here, the tension raises significantly since you don’t want to make any mistakes. One big mistake can result in you being sent back to the beginning of the stage, while a small one — like sliding down a wall too long — can add seconds to your time. The key there is to practice in single-player so you know right where to jump off. Despite the tension, multiplayer never stops being fun. If you feel like you were just one mistake away from a victory, rematches are easy to set up in the post-game menu, and if you’d just like to stop doing that and focus on the 30+ single-player stages, you can. The addition of power-ups makes things harder too, because while something like the double jump aids you, the speed boost can easily hurt you. It will save you some time if you’ve mastered the game, but being careless will result in more deaths that will easy take more time to recover from than you would’ve saved via the power-up.

It’s always tempting to blame poor performance on controls, but they work really well in Rush Bros., so that’s never an issue. Keyboard support is available, but controllers are recommended literally before the title screen hits — so play with one if at all possible. The controls can be completely rebound, so if you’d prefer to use A to jump and X to slide, you can. I didn’t mind the default setup though as it’s a logical layout that’s easy to remember. Most importantly for a precision platformer, the controls are responsive. Even on a mid-range machine like mine, there was never any input lag that caused me to have to completely change my timing on things. You’ll die many times in this game, but they’ll likely be due to panic instead of control issues. 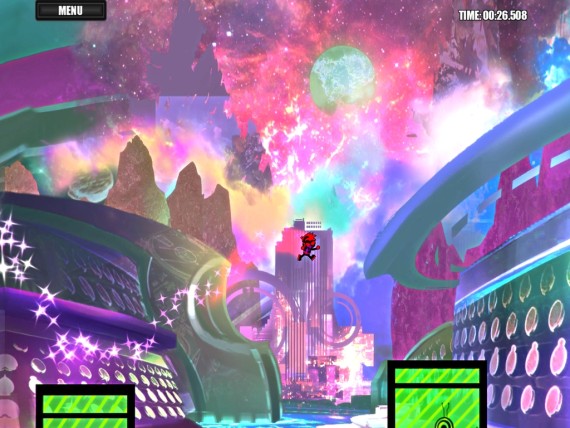 Visually, this is a jaw-dropping game. The sharp color on black outline characters make for a nice contract with the game’s environments, which tend to be bathed in color. Beyond the usual things like space-themed and forest backdrops, there are even some with creepy faces all around them. As you can see here, the screen is bathed in color and the sheer variety in the color schemes never ceases to impress. There’s no sense of sameness with the look of levels, and the  use of little color trails for power-ups only adds to the visual overload. Animations are a bit simplistic, but that’s never much of an issue with this game, or many others really, since that makes it easier to predict your own movements.

As a player, you may find it tough to play the game while either nodding your head or pumping your fist in the air wildly. The dubsteb/dance soundtrack is incredible and among the most catchy I’ve heard in a long time. There are many kinds of great gaming soundtracks, from the lush tunes in Journey, to purely funky music in Jet Grind Radio — this is more the latter and will have you humming at least a few of the songs long after you play the game. “Trip”, “Cities of the Future”, and “I Am Fire” are big highlights, with the last one sounding a bit like the classic Mortal Kombat theme from its console ads mixed with a dance song. The traditional sound effects of boinks and the like for jumps and springs work well, and managed to fit the genre while clearly making sure that the music is the star of the show. If you don’t like the default soundtrack, you can always customize it. I found that Ellie Goulding’s music meshed perfectly with the game, but I’m sure other light-hearted stuff like Lady Gaga would work fine as well. 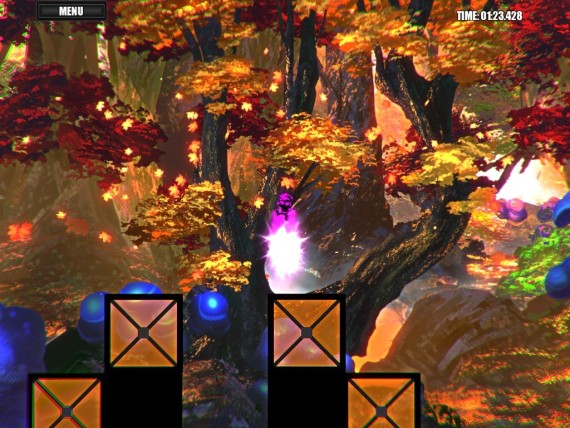 At a mere $10 on Steam, Rush Bros. offers up a lot of fun for very little money. Anyone who loves precision platformers will enjoy it quite a bit, as will fans of dance music, as the OST is full of it and it’s all good stuff. The racing aspect adds a lot of drama to multiplayer matches, while the desire to complete stages with minimal mistakes and deaths due to them drives the single player aspect. Rush Bros. came out of nowhere, but is a very polished game worthy of any gamer’s time.