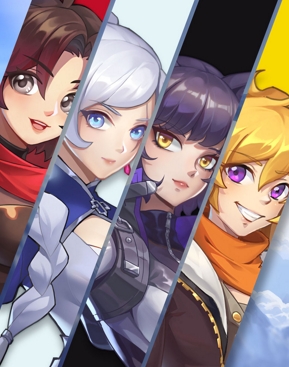 Over ten years ago RWBY was introduced to curious onlookers through its first trailer simply titled “Red.” For ten years the online series has been entertaining fans and has continued to be popular from its various seasons, spin-offs and outside media such as board games and crossovers. Finally we come to the most recent revelation that RWBY was getting another video game for people to take on their favorite cast of characters in with RWBY: Arrowfell. So now we get to see if this manages to be the next big step for RWBY or if it ultimately falters along the way.

It’s worth noting that RWBY: Arrowfell takes place in the midst of Volume 8 of the animated series, so for those who aren’t caught up on the series or are interested, there will be spoilers that we’ll do our best not to touch on in this review. With that in mind the story follows the main cast of huntresses Ruby, Weiss, Blake and Yang in their adventures in the wealthy floating city of Atlas and the lower city of Mantle. Mysterious orbs have started to crop up around the city and outer areas which seem to have a strange power to summon Grimm, the negatively-fueled creatures that inhabit the world. It’s up to team RWBY to find out and help put a stop to what’s going on in order to keep Atlas and Mantle safe. While most of the story is told through simple back and fourth text boxes, there are a number of instances where we get to experience animated cutscenes straight from the series art style that help showcase great moments. It’s a small thing, but ultimately feels great especially hearing the cast of characters use full spoken lines of dialogue.

Right from the get-go there’s an immediate problem with the introduction, specifically that there’s next to no tutorial whatsoever. For those who have played lots of action platformers this might not be an issue, but it’s a glaring oversight that doesn’t make any sense. The opening only gives tutorials for specific character powers, or semblances, but none for actual combat or anything else. It’s not terrible but shows a certain lack of polish that they can’t even explain basic controls quickly. The basics, however, are just that with most characters not feeling drastically different from one another. Each of the four characters can be swapped between using the right stick or bumpers and all of them come equipped with a melee and ranged attack in addition to their semblance. Ruby can traverse short distances with Petal Burst, Weiss can create platforms with her Glyphs, Blake can create a Shadow or herself used to press buttons and Yang can blow up special blocks with Burn. Characters share one health pool which consists of energy and hearts. Energy drains when taking a hit or using a ranged weapon, and will take away a heart once depleted and hit by an enemy. Losing all hearts resorts in a game over, but energy can be restored by finding energy particles or allowing characters to restore a small amount when they’re low. While character semblances will get more useful as the story progresses, the combat stays simple and bare-bones throughout the whole ordeal which is only slightly changed with skill points. 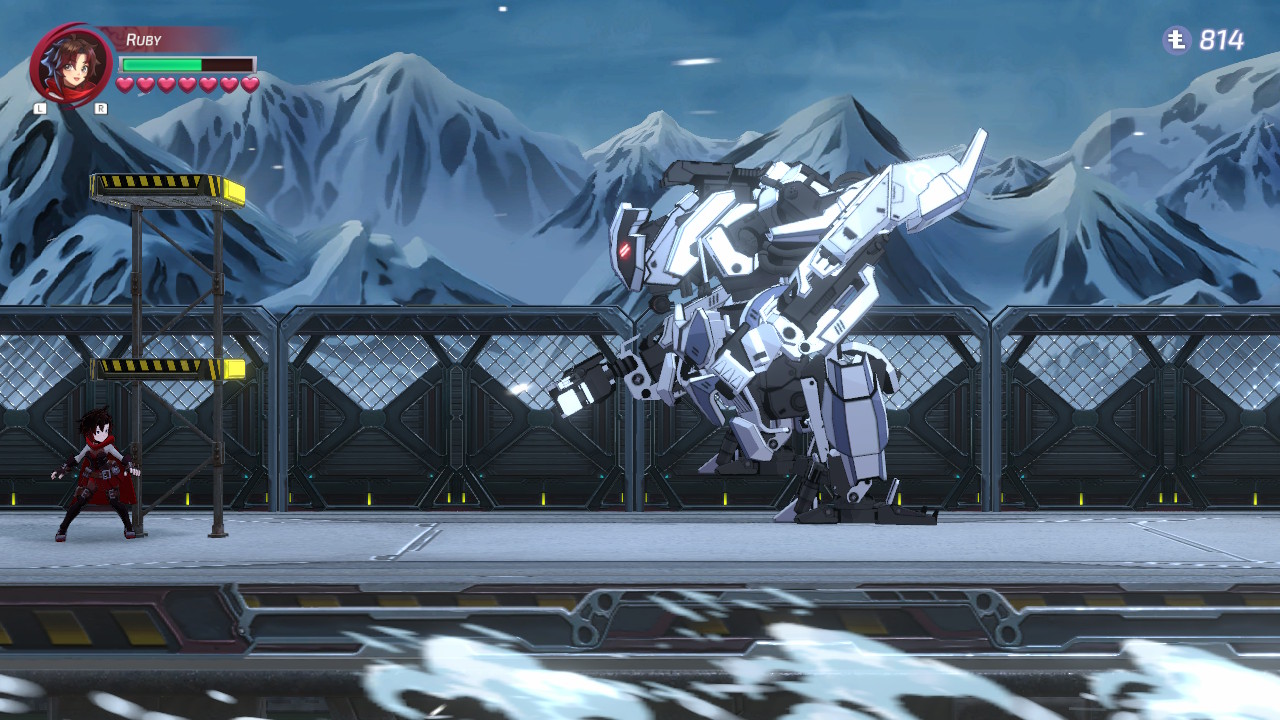 Skill points are one of the only non-essential items found throughout the many levels in Atlas. They can be found in treasure chests or occasionally purchased from merchants. These increase character individual skills which includes Melee Attack, Defense, Energy Heal and Ranged Attack. Right from the get-go it’s apparent that focusing on one character is important, as they are all weak and can’t take many hits. Skill points are also abundant so it’s easy to get more and fill up one character before too long. Outside of skill points the only things found in treasure chests are story-essential items, of which there are many because RWBY: Arrowfell in many ways is just one giant fetch quest. Every character wants or needs something, and getting it for them is required to progress the story which includes the most ridiculous things like finding a grape soda or a lost bird. The story is split up into chapters following by fetch quest after fetch quest which ultimately culminates in one big boss fight. Boss fights are not at all difficult as each boss has about three attacks they use over and over while team RWBY chips away at their mass of health waiting for them to be defeated. They’re not well-designed boss fights, and it doesn’t help that the damage done is tedious and doesn’t feel satisfying. There’s no combos, no aiming up or down to attack and no real way to increase the amount of damage done after maxing it out with skill points. Eventually characters end up feeling stale as they’ve maxed out their potential while new enemies continue to get more health which just makes them health sponges rather than threatening opponents.

The visuals in Arrowfell are nice, but end up feeling overused as many areas look so similar it’s often hard to differentiate them. The soundtrack has notable songs, but most of the soundtrack isn’t preparing to wow anyone in particular. There is a ton of backtracking through areas built haphazardly, and with no maps whatsoever, it can feel tedious have to go back and find whatever required item or task is needed. The one benefit is that there’s always a clear indicator of where is the next required location, but having to continually revisit areas that look almost exactly the same quickly becomes tiresome. Even fans of snow stages, of which the entire title is based around, will likely be wishing for a bit of greenery by the end. It can also feel annoying that save points are not abundant, being hidden away in levels at times, making it feel tedious to have to track one down just to save. 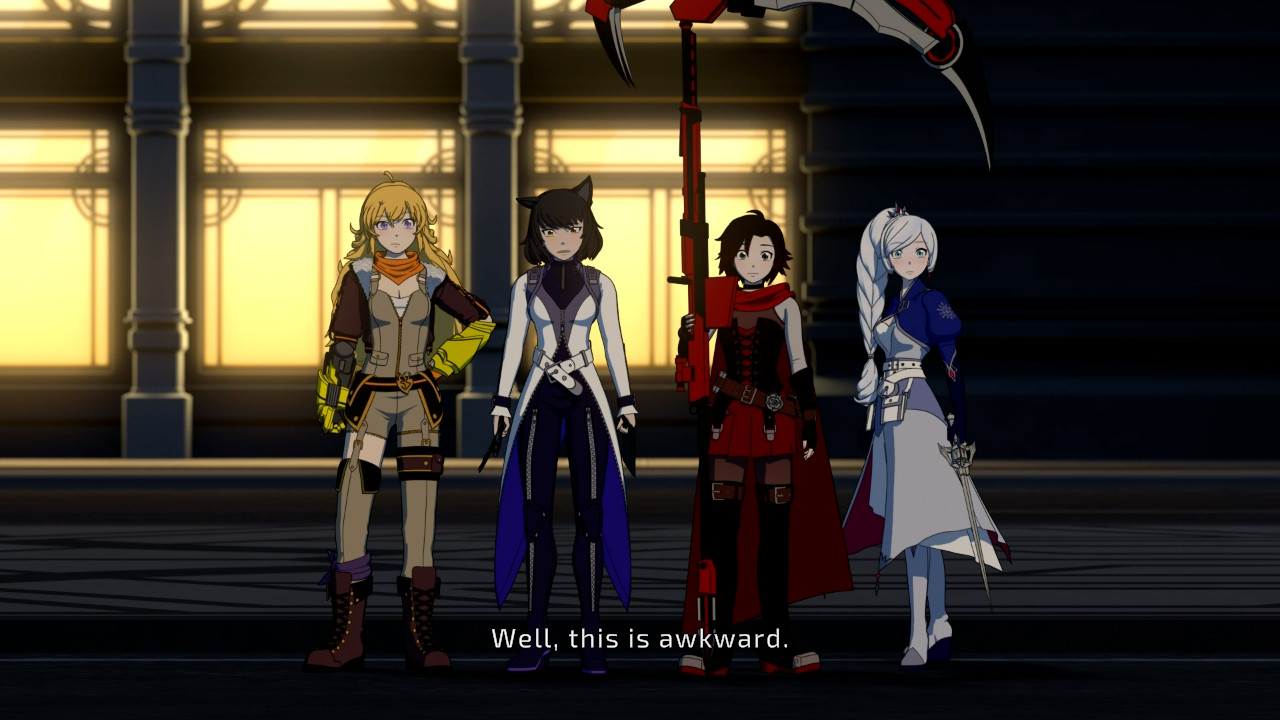 RWBY: Arrowfell is not a title we would necessarily call wholly bad, but it feels lacking especially when considering that the teams behind it have such a great track record for platformers and fighting titles. It’s hard to tell where things ended up to make it feel so “bleh.” The repetitive nature quickly becomes apparent, the lack of innovation in combat keeping anything from feeling fresh after the first few stages and it just feels like a series so focused around combat would deliver a more fleshed-out experience. RWBY: Arrowfell is a title that will only appeal to fans of the franchise, but even then it won’t offer a stunning gameplay experience or make it worth picking up for the story. At the very least it’s nice to see new interactions between characters, but it’s just a shame the gameplay loop just couldn’t pull through.