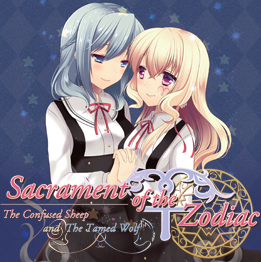 Sacrament of the Zodiac: The Confused Sheep and the Tamed Wolf

Here’s one thing that is absolutely awesome about visual novels: they are more than willing to depict LGBT romance in happy, healthy ways. You would think that we’d have gotten farther as much as this is concerned in the gaming mainstream, but it still seems like BioWare are one of the few developers really willing to showcase a wide variety of relationships. Then we take a look at the visual novel scene and realize that both large and small indie studios have been doing exactly that for years. As of late, we’ve finally seen a handful of yuri and yaoi titles officially launch in English. One of the very latest is the long-winded title Sacrament of the Zodiac: The Confused Sheep and the Tamed Wolf developed by Kuroirodoru Yomiji and published by Sekai Project.

In this game, players are invited into a predominantly religious academy for young women. Although a bit Catholic in its outward presentation, this school is actually organized around the zodiac. Every year, the school performs a ceremony known as the “Sacrament” in order to baptize its newest students. There’s more to this event, though. Another point of the ceremony is to see if any of their students have been especially blessed by a zodiac stigma. These stigmas show in the form of a mark on the girl’s body and effectively ensure that peace and happiness will continue to flourish on campus. With only twelve zodiac stigmas possible, the few chosen girls are looked upon almost as idols within the school.

Mokose Arissa is one of these chosen students. Selected by Aries, she has both the adoration of her classmates and a continually chipper demeanor which makes her a perfect representative for the zodiac. Sacrament of the Zodiac opens with Arissa praying in an ornate church when a brand new student wanders in on her. Having just transferred, Suou Hitsuji knows no one at the school but appears to have been fated to meet Arissa. The two exchange very awkward introductions that end with Hitsuji declaring her instant, overwhelming love for the other girl. Equal parts shocked and excited, Arissa accepts this spontaneous proclamation and agrees to begin dating. What?! Yes, it’s incredibly sudden, and it may have something to do with the innate allure of someone with a zodiac stigma, but the game never really clarifies how and why this “love at first sight” is accepted so readily. It’s just magic yuri love, okay! 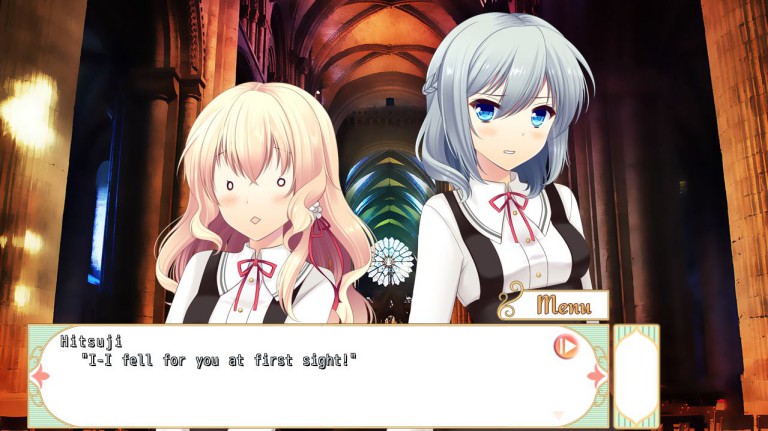 Really, as the story progresses, readers will quickly realize that not very much of anything is ever explained. For one, it is mentioned by Arissa that sexual activity is expressly forbid on campus between men and women — but this highly religious icon of the school sees no trouble with her own sexual activity. Hey, it never mentioned activity between girls, so that must totally mean it’s okay. The game also never touches on the potential for hateful discrimination, which is honestly a good thing as no one wants to confront the nastiness of reality when escaping into a cutesy visual novel. On the other hand, it does appear that the relationship between Arissa and Hitsuji is best kept a secret so all the other girls don’t get superbly jealous. You’d think that this intriguing setting with a religious school and zodiac stigmas would lead to something, but really we never get to learn much about it beyond the introductory setup.

There’s not even that much to discover about these two protagonists themselves. They’re both awkward in that typical anime trope way and act out their roles accordingly. Sure, charage (character-focused stories) is a thing, but that totally fails when neither character inspires players to care in the least about them.  We do learn a bit about each character as the tale progresses, but it could hardly be considered interesting character development. Mostly, we just know they are two young women experiencing love and human sexuality for the first time together. Although not an outwardly explicit, uncensored eroge (erotic game), there are still descriptions and depictions of these formative attempts by the two characters to please one another. Anything beyond breasts is censored and that may be for the best as the artwork of these characters’ anatomy in their entirety looks totally wrong. 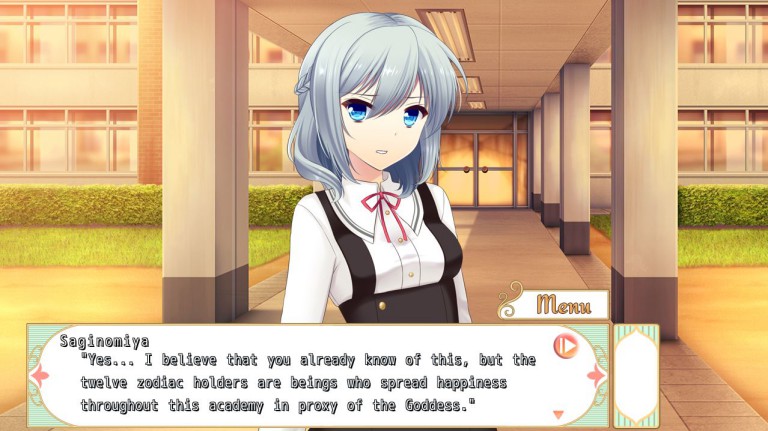 The most interesting (or potentially, only interesting) aspect is that Sacrament of the Sheep allows you to shift between either Arissa or Hitsuji’s perspective to view scenes from. At least, that is the intent. In reality, it appears that there are very minimal line differences scattered throughout between both characters. Once you’ve completed the game once you’ll find that the main difference between the playthroughs is simply that one or two new, brief sequences will occur. Completing this title with both its endings takes a little under two hours and, honestly, the second playthrough (whichever character it ends up being with) feels like quite the unnecessary addition. It extends the playtime but never actually accomplishes the goal of letting players actually hear the differing perspectives of Arissa and Hitsuji in any meaningful regard.

So, what’s actually good about this whole thing? Unlike many other indie games of the genre, there is actually Japanese voice acting for both protagonists as well as other assorted characters. As far as I can tell, their acting skills are pretty on point as well. In another plus, the soundtrack is quite nice. There might not be a ton of tracks on it, but the piano-based songs really set the mood for a tranquil, sweet romantic storyline. The art is a bit of a toss up. Character sprites look totally nice, but when you check out the CG sequences they range from good to okay to nightmarish. I’m not sure how this wide a range is possible but this title demonstrates exactly that. Finally, there don’t seem to be any obvious typos in Sacrament of the Sheep which is surprisingly quite a feat to pull off in a newly-released visual novel. 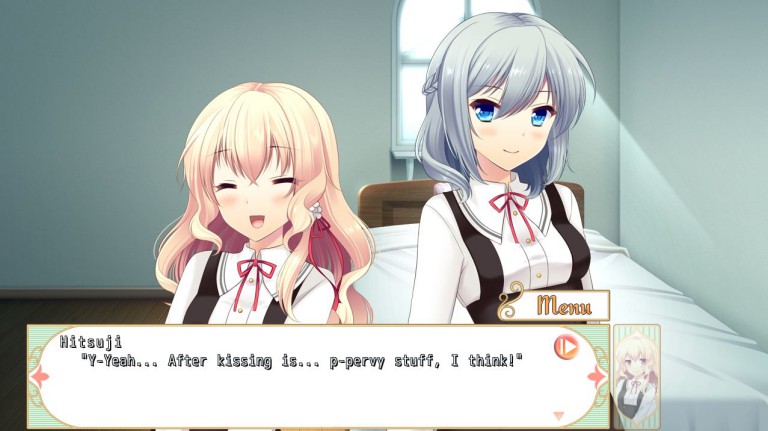 Sacrament of the Sheep actually feels a lot like it is the introductory chapter of something more. As of now, there appears to be no mention of this being an episodic series, though. I say this because you can tell that the developer was trying to stir up something beyond “just another yuri visual novel” what with this setting and zodiac stuff going on. Unfortunately, it plays out as a terribly uninteresting tale where neither protagonist is all that cool or believable. While I want desperately to share yuri goodness with gamers, Sacrament of the Sheep: The Confused Sheep and the Tamed Wolf is not going to receive my recommendation. As visual novels continue to proliferate digital marketplaces, we’ll certainly find yuri titles that can both be erotic and offer legitimately good storylines to players.