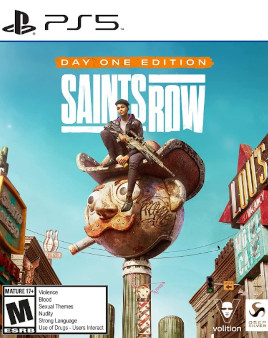 Saints Row began as a simple Grand Theft Auto knockoff, but after a few sequels the protagonists had super powers they used to battle alien invaders in a computer simulation after Earth’s destruction. To say the franchise has gone off the rails would be an understatement, and when the main characters don’t even have a planet to live on while their fallen allies are building a criminal empire in Hell, there isn’t really anywhere the series can go. Thus, the developers did the only sensible thing, and they gave the series a reboot for the Saints’ sweet sixteen, bringing Saints Row back to a world that’s slightly more grounded in reality, though the phrase “grounded in reality” is still being used rather loosely.

The rebooted Saints Row takes place in Santo Ileso, a fictional city that isn’t too dissimilar from Las Vegas. The player character, who will henceforth be referred to as the Boss, lives in an apartment with his three roommates. The four of them struggle to make rent payments, and while there are attempts at making ends meet through legal income streams, they typically end up to resorting to criminal activities to pay the bills. This eventually leads them to coming up with the idea that they should just start their own gang, and thus The Saints are born. Like the previous games in the series, the player is free to customize the appearance of the Boss including gender, race, hair and eye color, tattoos, prosthetics and personality.

Saints Row has mixed results with the development of the new supporting cast. They succeed in making the characters likeable enough, which is important considering they’re all mass murdering felons. Where they come up short is they aren’t the most nuanced or even memorable characters. Kevin is the perpetually shirtless DJ with ties to the anarchist rave gang, the Idols. Neenah is a gearhead mechanic with a desire to become involved in the art world, and she also has ties the meathead motorist gang, Los Panteros. Eli is the nerd of the group and probably the most likable of Saints. Armed with his whiteboard his knowledge is essential to getting The Saints up and running, plus he introduces the Boss to the LARP known as the Dustmoot. And last but not least, the best character of all, Snickerdoodle, the resident orange cat who always has the Saints’ back. They make a decent enough supporting cast and have potential to be interesting, but none of them live up to it. I enjoyed their company, but can’t see any of them getting their own spinoff like Johnny Gat. 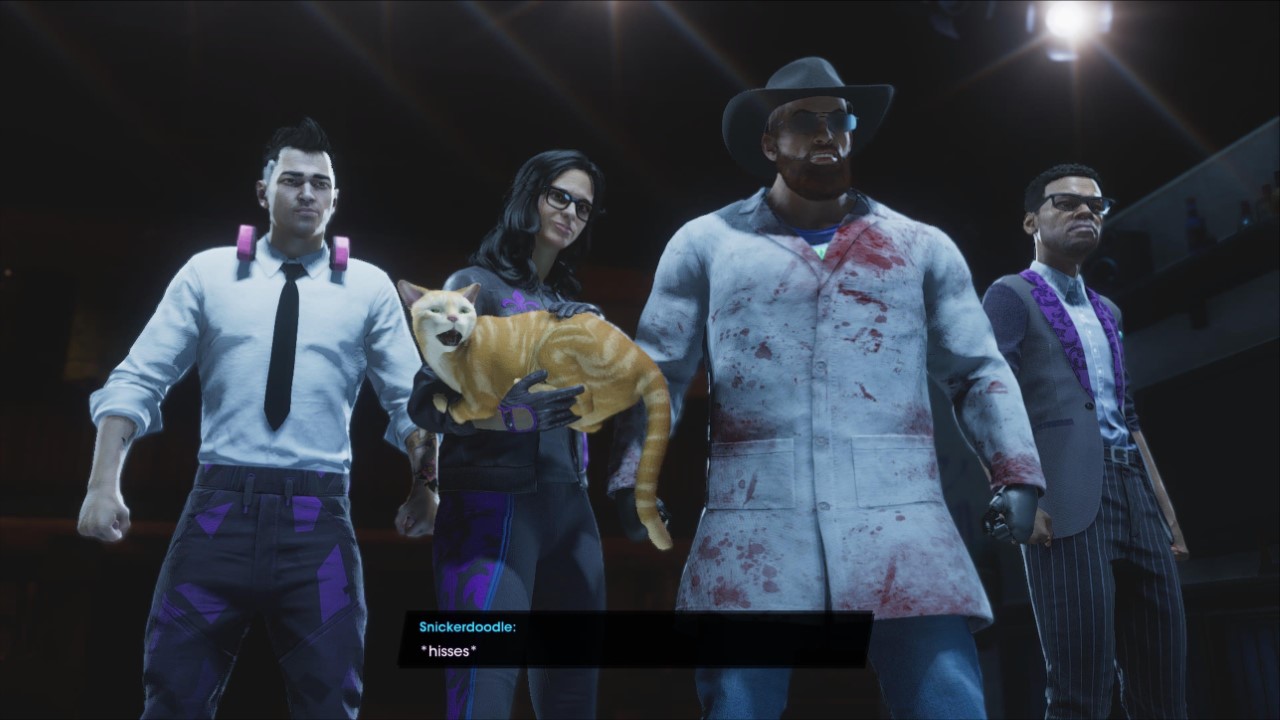 Just like real life, the Boss’s cellphone is an essential piece of equipment to navigate life in Santo Ileso. Not every activity can be managed through the cell, but the bulk of the Boss’s needs are in the palm of their hand. It’s a useful hub for managing Skills and Perks that get unlocked as the game progresses. There’s a Wanted app that sounds like a dating tool, but it’s really for tracking down bounties on contract kills. It’s also useful for managing money, keeping track of collectibles, customizing a radio playlist and calling homies to help with jobs and activating missions.

Outside of completing story missions the Saints need to establish a name for themselves by building a criminal empire. This is done through purchasing criminal ventures at their HQ, which also generates passive income for the player. There’s a decent variety in the activities and plenty to do that can keep the Boss busy, which serves as a double-edged sword. Saints Row veterans will recognize activities like Insurance Fraud and Mayhem, where the player throws themself in traffic to rack up cash or blow up as many vehicles and people as possible, respectively. These activities are fun, but other jobs like trying to find what Edith wants photographed or driving trucks of toxic waste barrels are less exciting. Regardless of how enjoyable each activity might be, traversing the map to complete every activity to complete each criminal venture can get monotonous and feel like busy work to extend playtime well before the player reaches Empire Tier 5. 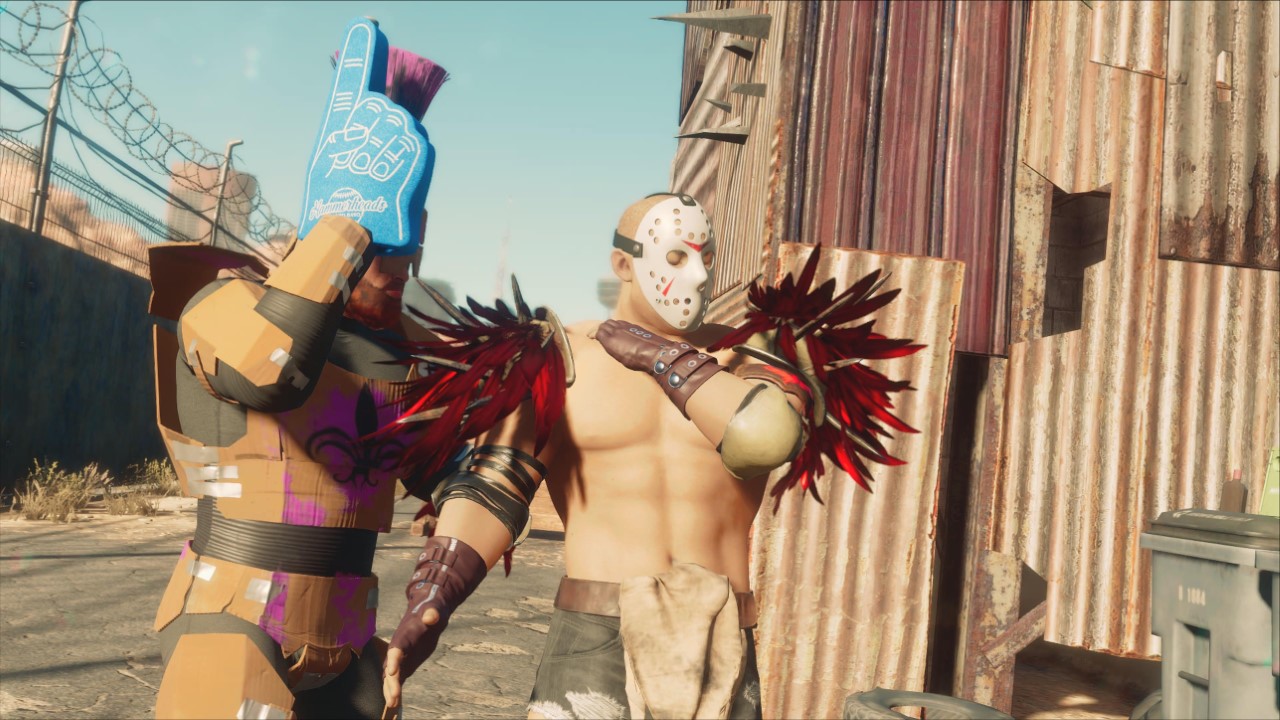 Santo Ileso is a large open sandbox for the Boss to explore. Traveling through the vast expense can lead to discovering interesting sights off the main path. We don’t want to spoil what all is out, but do suggest taking time to familiarize oneself with the environment and see what secrets are hiding in the desert. Also like real life, pulling one’s head out of their apps can allow to find opportunities not on the phone. Some of these activities include Riding Shotgun where the Boss literally rides shotgun during a pursuit. There’s also @tcha, which is the Saints Row version of Yelp where the Boss has to fight off angry mobs that are outraged at negative reviews. The @tcha activities are a decent way to make extra cash and are fun for a couple of them. but if you do one, you’ve done them all. All the extra activities are clearly marked on the map, so completing everything is relatively easy, though can be time consuming.

The player is strongly encouraged to explore the open world along with completing side activities and criminal ventures. The actual main story missions can be completed in just a few hours, and mainlining the story would deprive the player of much of want Santo Ileso has to offer. The story isn’t anything spectacular, but it does check the boxes of what’s needed to effectively keep the player’s interest in the start up of the Saints version two. Some of the story missions are well designed and executed, which makes it a shame that it can be over so quickly. In addition to the main story missions there are a few side missions that help improve bonds between characters. The Dustmoot line of quests are particularly entertaining and likely contain the role-playing game session that got the most out of hand that didn’t involve the Upside Down. The overall tone is a return to Saints Row 2 with just a hint of a some of the zaniness that later came in Saints Row: The Third. The tonal shift back to a more realistic comedic take on gangster lifestyle is a welcome return to the classic formula, though this actually seems like the most light-hearted Saints Row title to date. The Saints are still a gang that has no qualms about mass murder, but the game has a light tone without any of the real dark and brutal executions that were found in some of the earlier Saints Row games. Earlier entries were known for pushing the boundaries of bad taste and controversial content, whereas this reboot plays it safe considering it’s about building a criminal empire that specializes in murder. 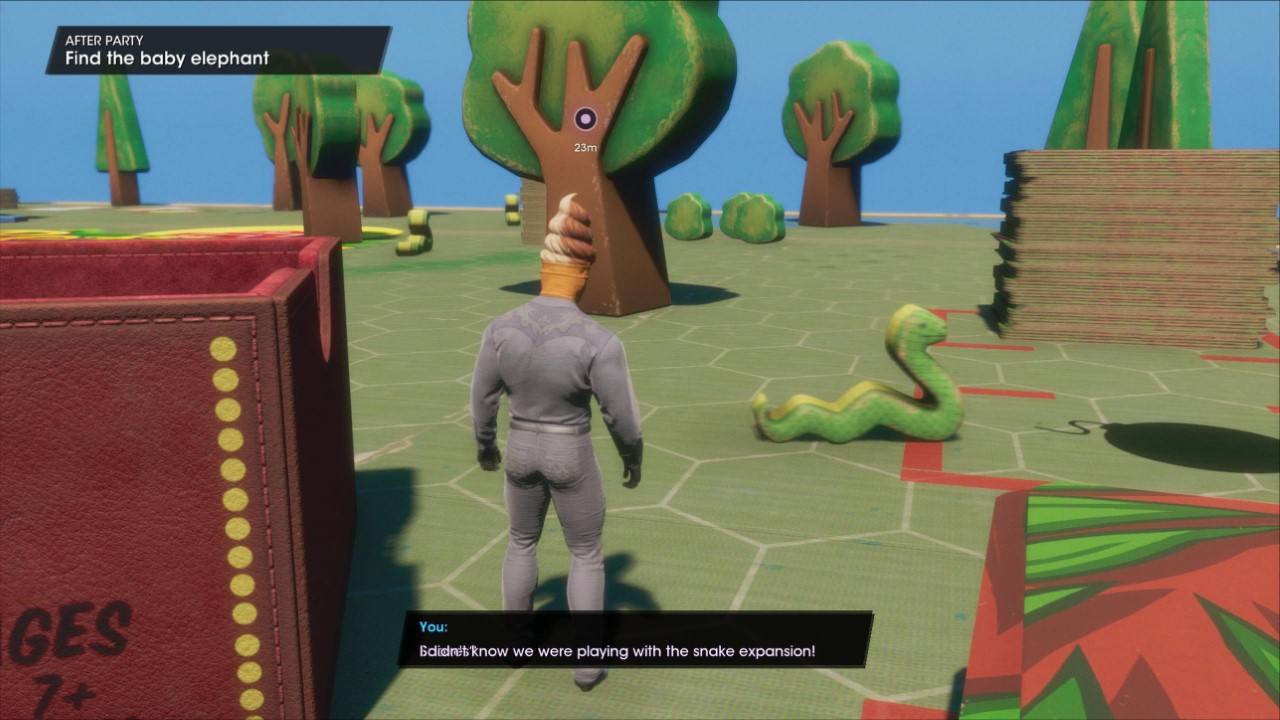 Unfortunately there are technical issues, such as many minor visual bugs and gunplay would have benefited from more fine tuning. Saints Row performs differently across the different PlayStation consoles, and while this is the only console where there’s personal experience, one can assume there’s likely similar variance across Xbox consoles and different PC builds. When it isn’t suffering from technical hiccups, it runs fine for the most part on PlayStation 5 and PlayStation 4 Pro. Regular PlayStation suffered from long loading times, the game crashed a few times and the Playlist app wouldn’t load at all. The two more modern PlayStation consoles had their own issues. The game runs fine most of the time, but there were minor visual hiccups and stutter issues, though there was a noteworthy major visual issue at the final boss where the enemy was starting to morph into something resembling those inflatable tube people that are sometimes seen outside of used car lots. Considering this is Saints Row it wasn’t immediately obvious if that was supposed to happened but no, it was a glitch and not a shark jumping moment where the boss assumes his final form. So while it’s not without tech issues on any platform, it runs well enough to be enjoyed on PlayStation 4 Pro or PlayStation 5, but wouldn’t be recommended for a regular PlayStation 4.

The following is a list of things that happened while playing on PlayStation 5 or PlayStation 4 Pro. These are missions that somehow became unpassable due to something not working right. The score isn’t being docked severely because of this since one, reloading the save file from the last checkpoint fixed the problem and two, there’s a Day One patch that may address these so those playing after launch may have a better experience though that may be naive optimism. One mission required sentry drones be destroyed and the drones became bullet proof until the game was restarted. One mission had enemies spawn outside of the mission area so they couldn’t be killed. One mission all enemies were killed, but they had to get reloaded and killed again because the prompt to hotwire a door never appeared. There was one mission where the jump button stopped working, so that poor llama that needed to be reached by jumping couldn’t be acquired. This might be the only time in my long history of gaming where the jump button just stopped working. VTOL missions are fun when they work properly, but going into stationary mode zoomed in is the equivalent of putting one’s eyes against the pavement. The last one was when the Boss was fired from ballista and froze in midair. All of these issues were solved through some type of restart, so they weren’t game breaking, but having to restart because of a glitch is annoying. Saints Row was already delayed six months, but delaying it a couple more months might not have been a bad idea. 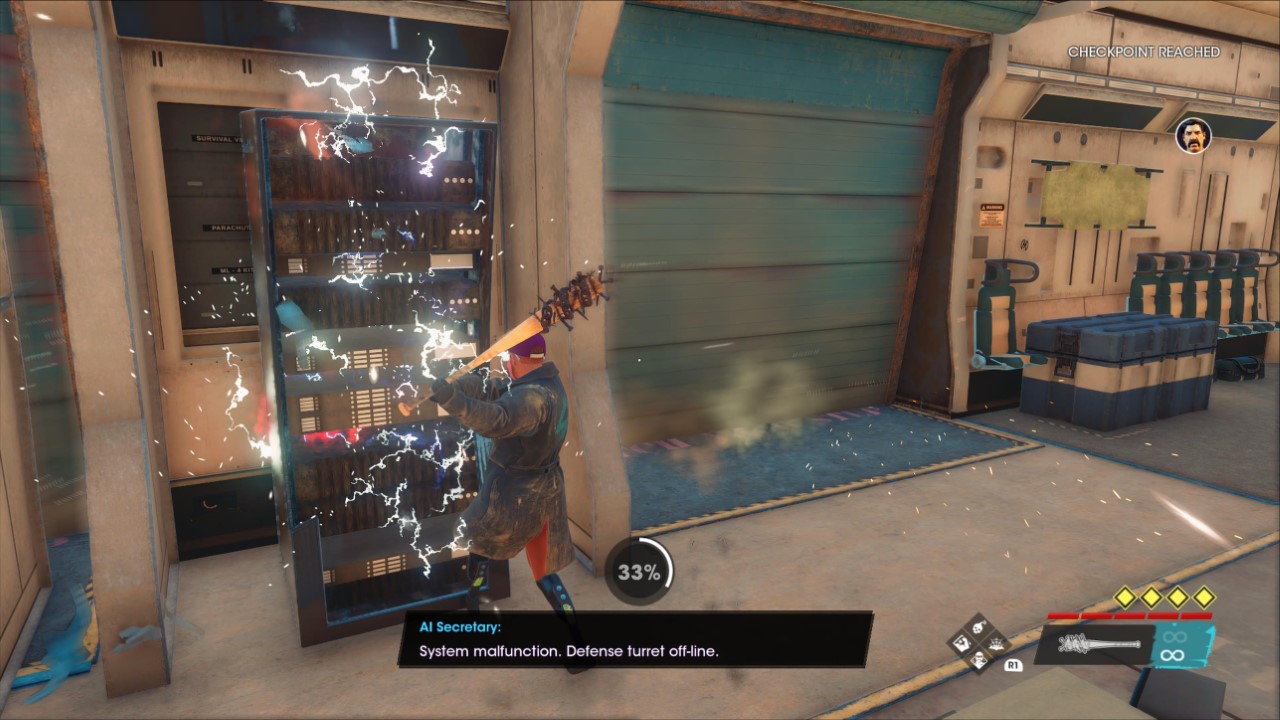 Technical issues notwithstanding, Saints Row is not without its shortcomings, but it succeeds more often than it doesn’t. Even with the release date pushed back it still doesn’t feel finalized. The tech issues can hopefully be ironed out in a patch or two, but the characters could have also benefitted from further development and being more fleshed out. Santo Ileso is a great open sandbox to explore, but it seems like a greater emphasis was placed on repetitive criminal venture activities and less on the more exciting story missions. Still, what Saints Row does well is it does very well with memorable missions after the Saints have started to establish themselves. The banter between characters is generally entertaining and a lot of the humor is derived from this series never taking itself too seriously. There’s a lot of potential with this reboot and new cast of characters, but it doesn’t seem like it was fully realized in this title, making it a game that’s fun for Saints Row fans, but isn’t the spectacular reboot we were hoping for.