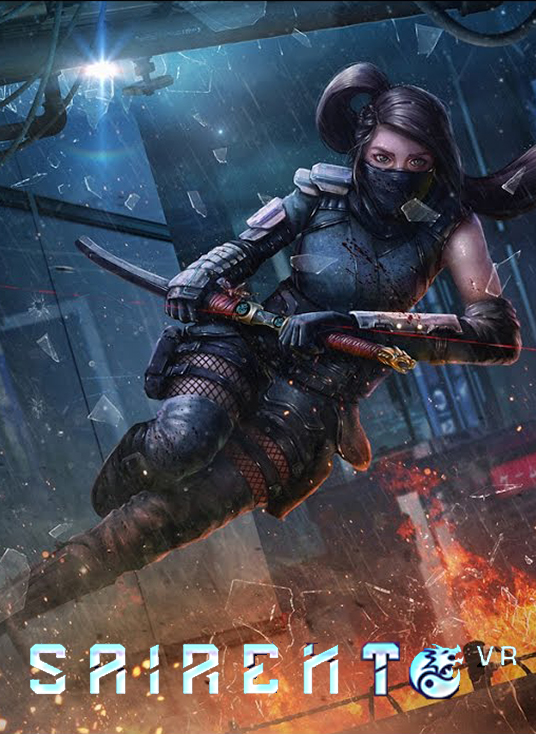 It’s not easy being a ninja.  In addition to having a mastery of all weapons across all weapon types you also need to be ridiculously acrobatic, all while moving so fast that you basically control time.  It’s nice work if you can handle the requirements, but for those of us who can’t spend every waking moment since birth in a laser-sharp focus on the killing arts, the ninja is simply a fantasy.  Or you can strap a VR headset on and go to town in Sairento VR, choosing an arsenal and developing a play style that transforms you into the lightning-fast embodiment of death.

One day in the subway a secret ninja was going about her day like any normal person when the station is destroyed by an unspecified disaster.  A voice on her radio implant explains there have been multiple attacks taking place simultaneously all across the city, so she instantly stops pretending to be anything but one of the most skilled warriors the world has ever seen and flips out like a ninja, cause that’s what ninjas do.  The game has already opened up with an optional tutorial before the first mission is even available, meaning you can jump straight to trashing the horde of cyber-baddies waiting ahead.  Swords, pistols, shotguns, rifles, machine guns, throwing knives, bow and arrow, and many more tools of carnage are at her disposal, and while you can’t carry them all a weapon loadout of four different items means you’ve got plenty of flexibility in your options.

Weapons are nice, but ninjas are also nimble, and in a VR game that can spell trouble.  Sairento handles this amazingly well by the simple use of a jump button, which acts kind of like the targeting in standard teleport-style VR movement except you fly towards the landing spot rather than blink there.  Hold down the jump button and a targeting reticle appears to show the landing point, and you can adjust it as necessary.  Keep the angle low to dash forward, or point the controller at the ceiling for major air-time.  Ninjas can double-jump, of course, so you can correct your trajectory mid-air, and the jump-counter is reset if you spring off a wall.  Jump up, jump a second time into a pillar, spring off the pillar for more height, then jump again while targeting the pillar’s top for a perfect vantage point to scout the room.  Oddly enough, while double-jump is incredibly useful, it’s still second place to the time-freeze that happens when the jump button is held down. 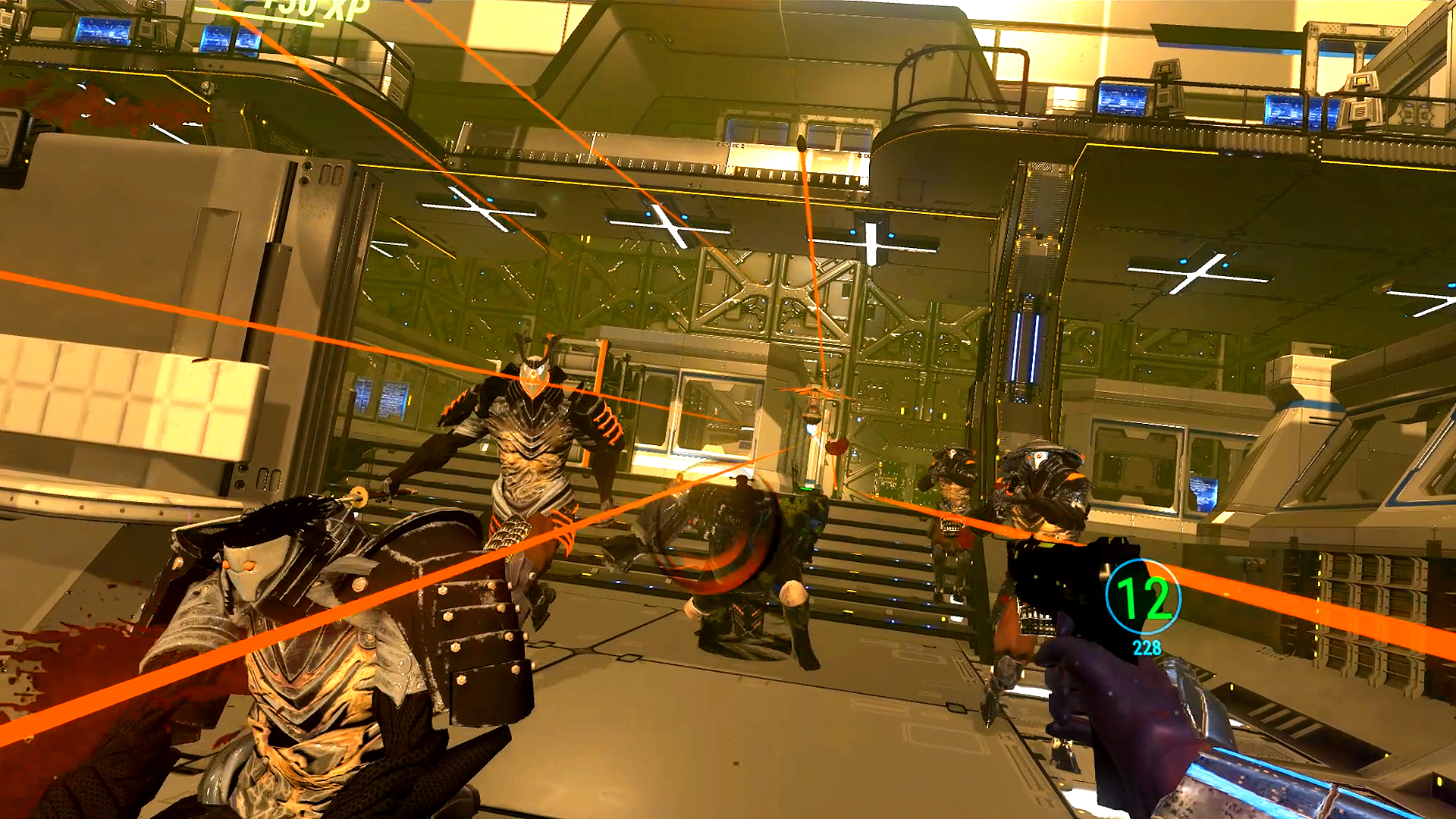 Ninjas are supposed to be fast and deadly, and while you can’t speed up your perception of time Sairento is more than happy to slow things down to a more reasonable pace.  Hitting the jump button doesn’t slow time down to near-imperceptibility like SuperHot but it’s pretty close, and you can use this at almost any point to do whatever you need.  Jump into the air with machine gun in hand, slow down time, and drop down while raining a shower of bullets on the enemies below.  Spring towards a giant armored samurai with sword at the ready, slow time as you land, take three or four good swings, then spring on out of there before he’s completed his counterattack.  Time isn’t so slow that you can ignore all threats but it’s still an incredible advantage once you get used to its tempo.  Using the jump to spring from wall to pillar and back again all while raining down gunfire in slow motion on the enemies below (while being careful to swat away any stray return fire with the katana, of course) simply never gets old.

Every enemy you take out drops an item of some sort, whether it be health, cash, or some other power-up.  Health and ammo are the only useful in-mission items, but back at home base you can leaf through the mission’s haul and play with your loadout.  Each of the weapons has four slots to fill, one of which is assigned to color and the rest being for perks, while each of the five pieces of armor has between one to three perk slots.  You can use the cash from missions to buy perks, or just use what you can scavenge from the battlefield.  One of the pickups is a little radar-dish icon called a Beacon you can use to bump up the difficulty level, resulting in better loot to go with the higher challenge.  That challenge also comes with a good opportunity to gain experience, with each level earning a point you can spend on a good number of tech-trees.  Upgrade the double-jump to a triple, add a ground-stun move performed by putting your hand on the floor when landing, or just increase ammo capacity and damage for the machine guns.  Both flashy and utilitarian upgrades have their place, and you can experiment as you need.  The worst thing that happens with a bad move is you hit the Respec button on the specific upgrade tree and re-do it from scratch, getting back all your points and trying again. 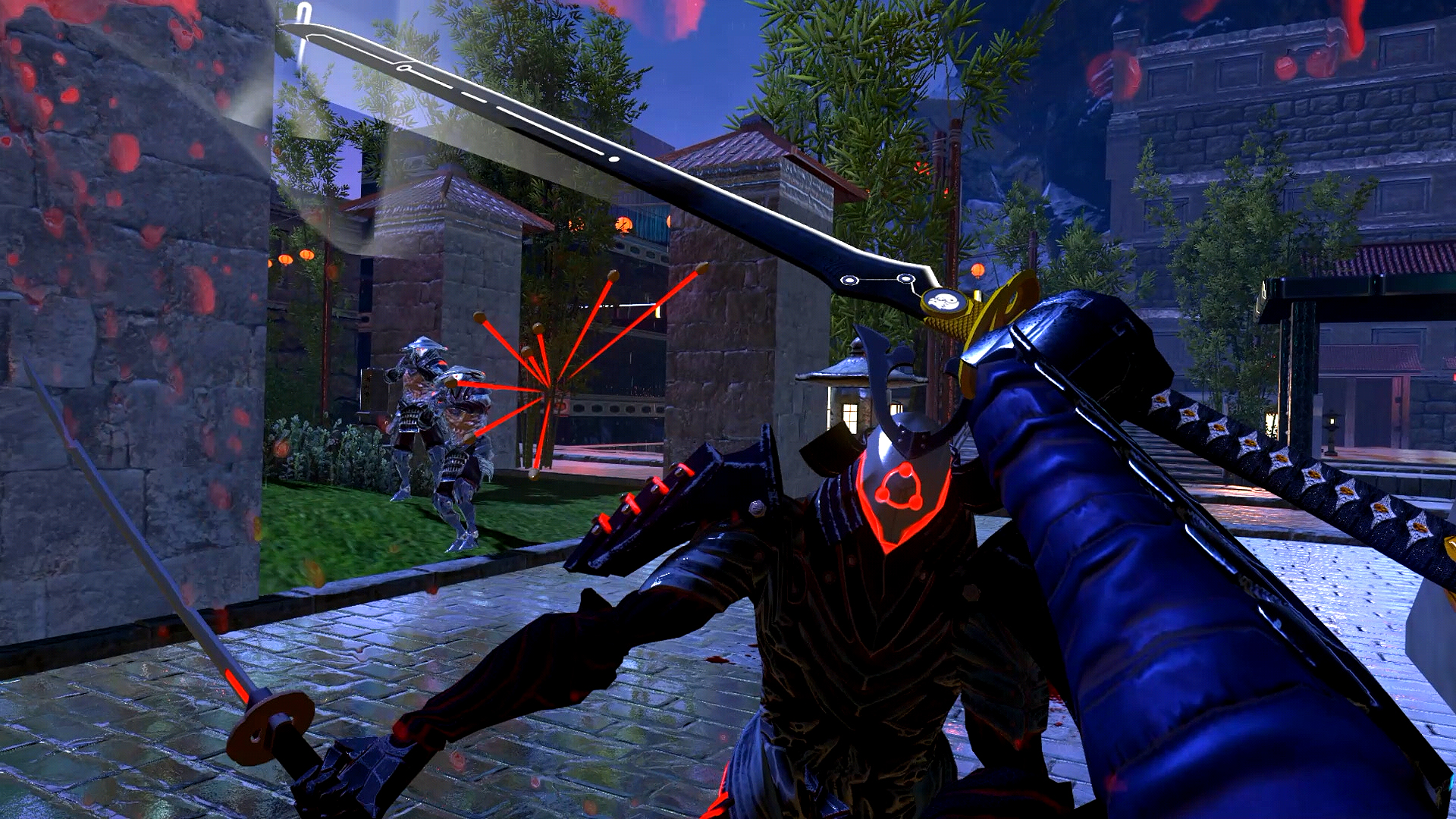 While you’re powering up with better weapons and skills, the enemies aren’t going to sit back and let you trash them.  Once you’ve been one-shotted by a cyber-sumo you quickly learn to keep your distance, and while kunoichi go down with a single arrow or sword-slash they’re cloaked until they choose to attack and can easily get behind you.  Even the simple foot soldiers pack a punch when you’re paying attention to the big cyan mecha-samurai, and a sniper-shot to the head is as deadly from a peon as it would be from someone more imposing.  Put a few difficulty beacons on a high-tier side mission and you’ll feel you’ve earned every point of exp and rare loot drop that may come your way, but even if it takes a few times to get through it still feels great to do it.

Sairento VR is simply a fantastic ninja-simulator, and the only thing holding it back is a few technical issues.  Putting your head through the ceiling during a high jump is common, and some maps have nooks that can drop you through the floor.  In the game’s favor it’s smart enough to set you back to the starting point when this happens, but it would be nicer if the level geometry was shored up.  While the gameplay flows smoothly, the menu system is a bit of a mess, with options all over the place and certain important features easily missed.  I had no idea about level-up skill points until I hit level 6, and didn’t realize armor had upgrade slots until roughly the same time.  It’s not that the options are hidden so much as there’s a lot of them presented all at once on a screen that’s part of home base, and I still sometimes accidentally jump at the monitor instead of activate a menu function.  Scrolling through menu options also uses the same stick that turns you, and it can be disconcerting to be looking at a menu one second and turned 90 degrees the next. 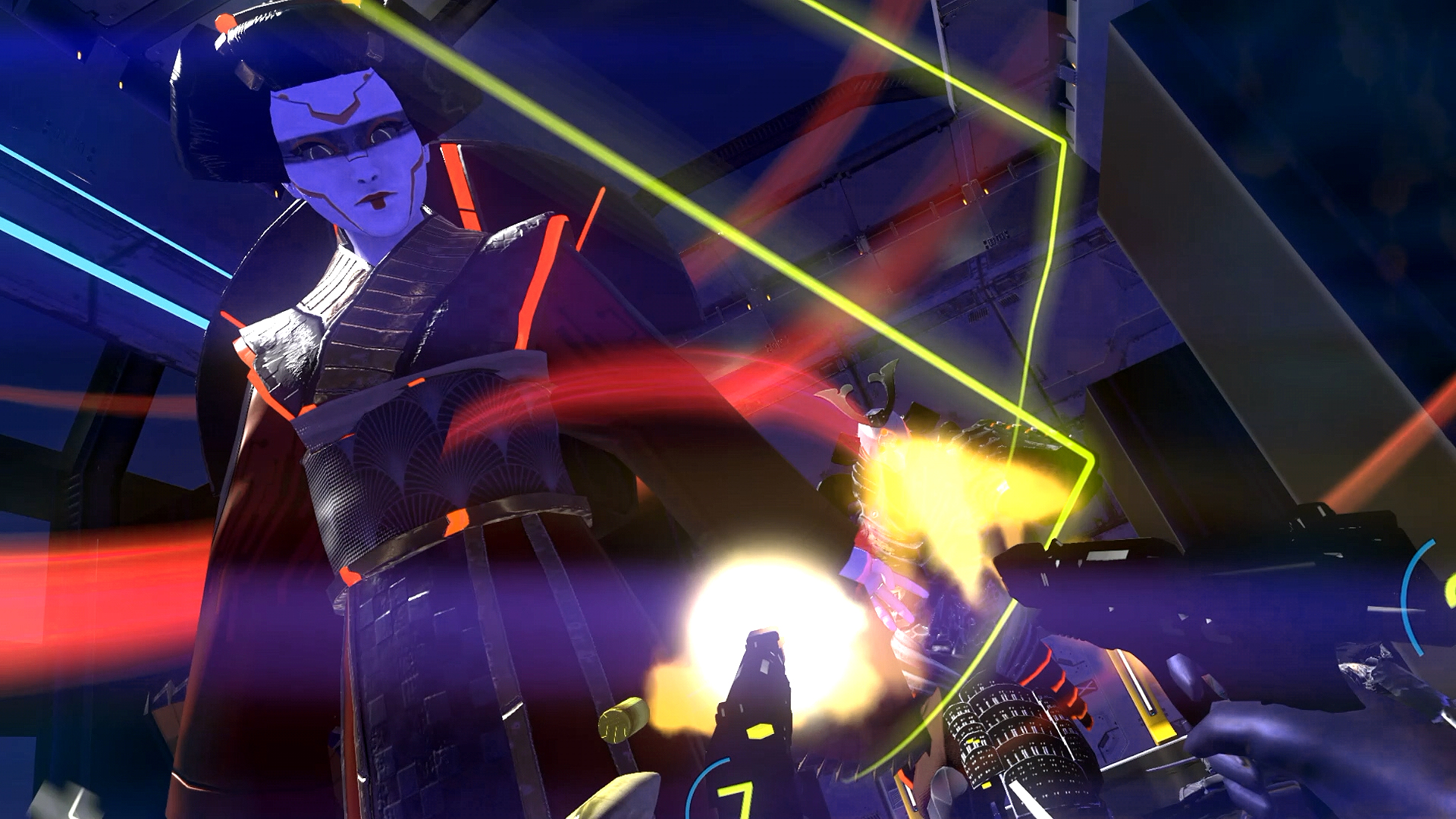 While it’s a bit creaky around the edges at times, Sairento VR‘s ninja action is truly fantastic when it gets moving.  Hopping from wall to wall while picking off headshots then diving to earth in a slide that ends in decapitation feels amazing, as does holding the high ground and raining arrows down for stealth kills.  You can pull out the guns and go in blazing or pick your way carefully and be sneaky, although once one enemy has seen you, all enemies always know where you are so you need to be ready if things go wrong.  There’s a huge amount of depth in its gameplay and every moment can be dealt with in whatever way makes you happiest.  Dive in with the sword, dual-wield pistols, break out the sniper rifle, toss kunai around or machine-gun everything that moves.  If you can combine speed, grace and firepower, there’s not an enemy out there that can stand against your ninja might.