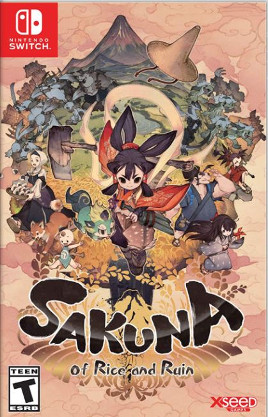 Sakuna: Of Rice and Ruin

Imagine enjoying the pampered life of a deity. Life takes place in an otherworldly paradise free from the stress of headaches us mortals have to deal with. Even within the hierarchy of the gods you’re high enough up where you may not be the top dog but in a high enough place where people attend to your every need and wait on you hand and foot. Life is sweet, as you spend your days in a state of blissful inebriated sloth. Then some mortals get in after you fail to scare them away. They run through the no mortal zone carelessly, breaking some expensive vases and when everyone is caught by someone who has power over you, you throw a tantrum and end up banished to an island you must rid of demons and farm rice. This is the current state of affairs for the titular protagonist in Sakuna: Of Rice and Ruin.

Sakuna is not alone on the Hinoe Island where she’s banished, as her advisor and intruding mortals have also been sent to Hinoe Island with her. The people with Sakuna aren’t as skillful as she is, what with her being a deity and them being mortals, so much to her dismay the essential tasks that lead to their continued survival fall on her, such as gathering materials for construction and food, tending to the farm and killing demons. Sakuna: Of Rice and Ruin is part 2D action platformer and part 3D farming simulator.

Exploring the island locations to gather resources and kill demons is done in old school 2D glory, with beautiful 3D graphics. There’s a fair amount of depth to combat. Sakuna fights with farming equipment and can do quick attacks with hand tools or more powerful attacks with larger two-handed pieces of equipment, such as backhoes. She can learn advanced attacks that can hit multiple times or launch an enemy into several other demons. Sakuna wears a divine raiment, which allows her to grapple up walls and reach inaccessible areas. This also has implications in battle where she can use it to harm demons or safely swing to the other side of them. The battle system offers a lot of different options to handle enemies and the ease of control make battling extremely fun. Many of the areas Sakuna explores has challenging boss fights, which are often large animal-based demons inspired by Japanese mythology. 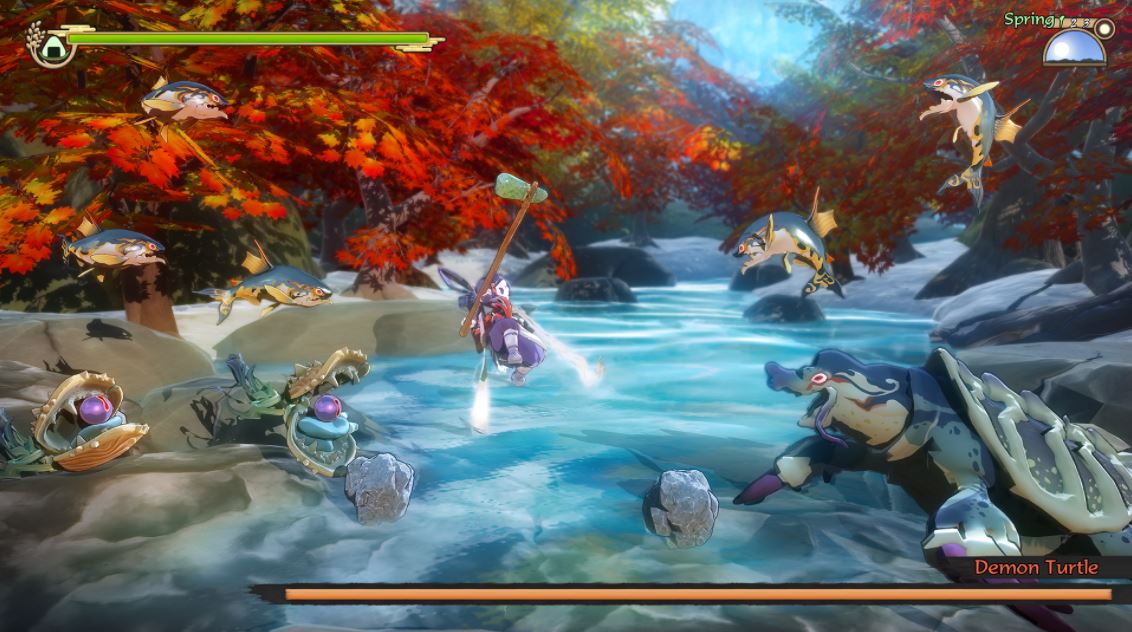 Back in the mountain village Sakuna and her mortal companions call home, farming is a major part of daily life. The farming portion of the Sakuna ends up being rather involved. It’s a learn as you go procedure, as Sakuna has lived a pampered life and probably hasn’t ever done any manual labor. Initially the farming portion did feel like a chore but soon was accepted as a well-developed portion of the game. There are many things to consider for farming and each aspect is made into a bit of a minigame. Sakuna needs to take into accounts things like spacing the rice plants apart and thoroughly tilling the soil. Water management and fertilizer composition are also crucial factors, as well as weather conditions, temperature and proper harvesting procedures. Getting into all the nuts and bolts of successful farming honestly could be its own article, but learning on one’s own is more satisfying. The game could provide clearer direction in how to successfully play the role of farmer, as most of the success comes from basic instruction on the concept and trial and error to learn proper execution.

The blend of demon-killing platforming with a farming simulator seems like an odd direction for game design, but this isn’t entirely unheard of. While Sakuna: Of Rice and Ruin would probably initially not make Actraiser spring to mind, there was some similarity between the two. During the days Sakuna can venture out into the island and explore newl- discovered locations, battling demons and collecting resources before returning back home. Once she returns to their little mountain settlement she can assist with the meal preparation to bond with her companions and acrue status bonuses. The people that she’s brought with her need things to do so they end up tasking her with collecting other materials to build weaving looms and blacksmith forges to create new clothing and weapons for Sakuna, making the place they were all banished to start to feel like a thriving community, albeit a small one where the members number in the single digits. 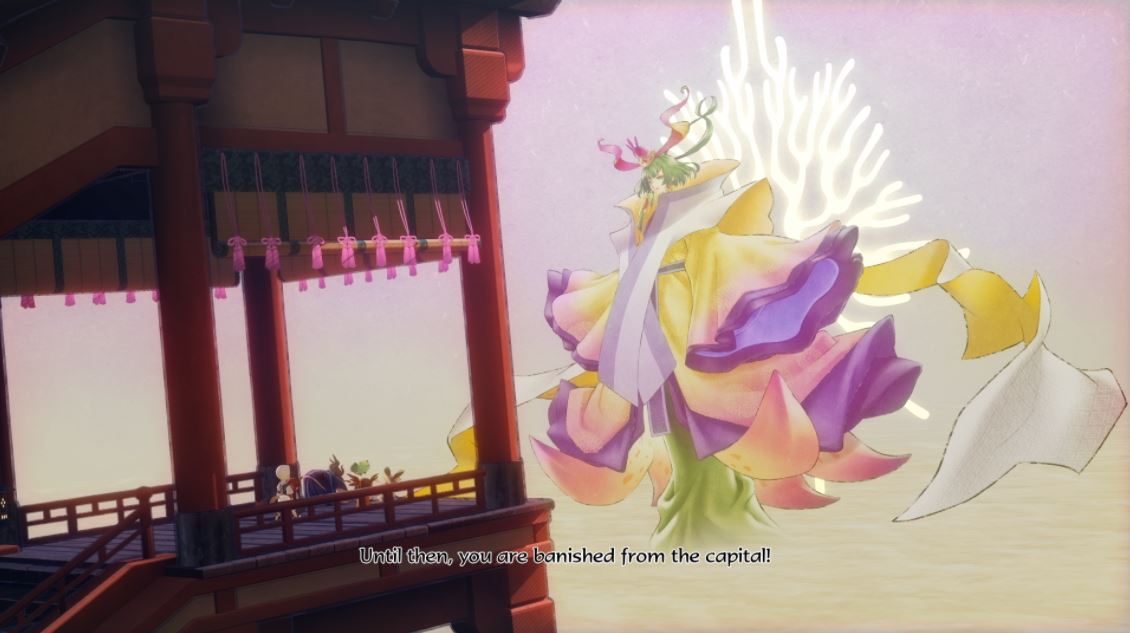 The characters have their own personalities which become more revealed as progress is made throughout the story. Sakuna’s personality is grating early on due to being a spoiled and pampered deity and sometimes seems unduly mean to the people that she’s forced to live with. The mortals generally seem to be good natured at their core and suffering through the spoiled god princess may be part of their punishment for trespassing where humans are never meant to go. But despite oftentimes coming off as a petulant brat, watching Sakuna’s relationship grow with her companions on Hinoe Island is enjoyable to witness in its unfolding.

The world of Sakuna: Of Rice and Ruin is beautiful to behold. The graphics have a quality of hand-painted likenesses despite being 3D models, even in the 2D sections of the game. The environmental and creature designs, particularly the boss monsters, are a delight to behold and show a new creative spin on some traditional design concepts. The music compliments the visual portion of the game, with the music played during the intro where the unwelcome visitors are chased by Sakuna have a particularly mischievous sense of whimsy to it. The controls are a dream to pull off, and switching between Sakuna’s advanced special attacks and flinging herself around with the divine couldn’t be easier. The English voice acting isn’t anything special but they do a good enough of bringing their characters to life. 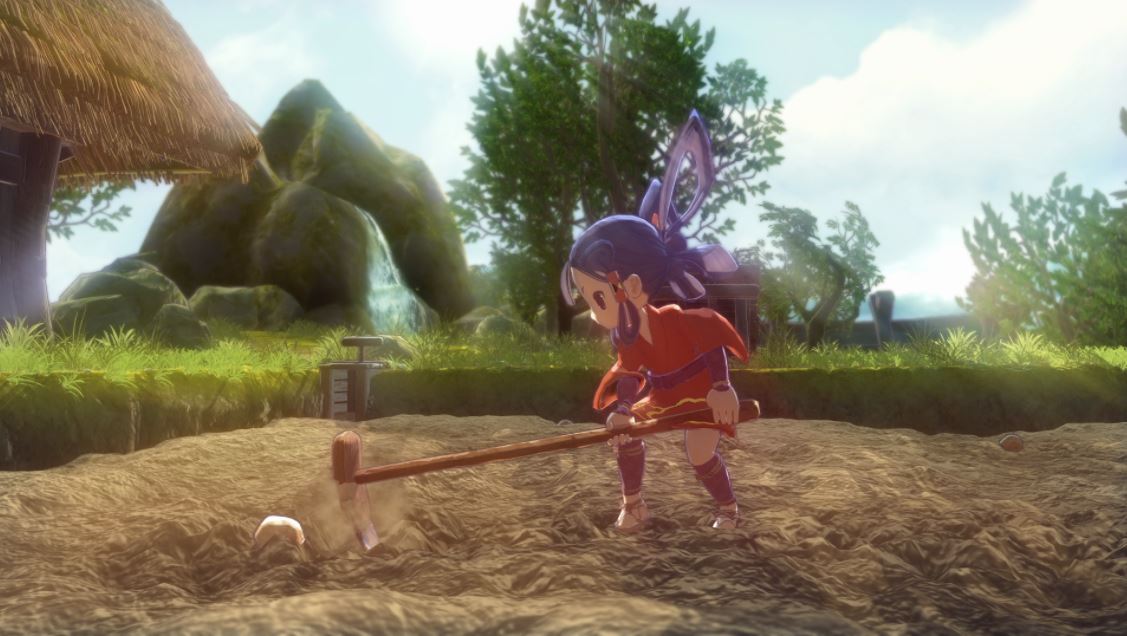 Sakuna: Of Rice and Ruin seamlessly blends 2D platforming action with 3D farm management. There’s a great amount of depth to both the farming simulation portion of the game as well as the more action-oriented 2D portions. What makes this game worthwhile is how well its blends the different elements together, creating something that feels like a cohesive whole as opposed to two different games being haphazardly slapped together. It keeps the basic mechanics of what make old-fashioned 2D games good, but blends them with enough modern mechanics where it feels contemporary and its unique art direction makes watching it almost as enjoyable as playing it.