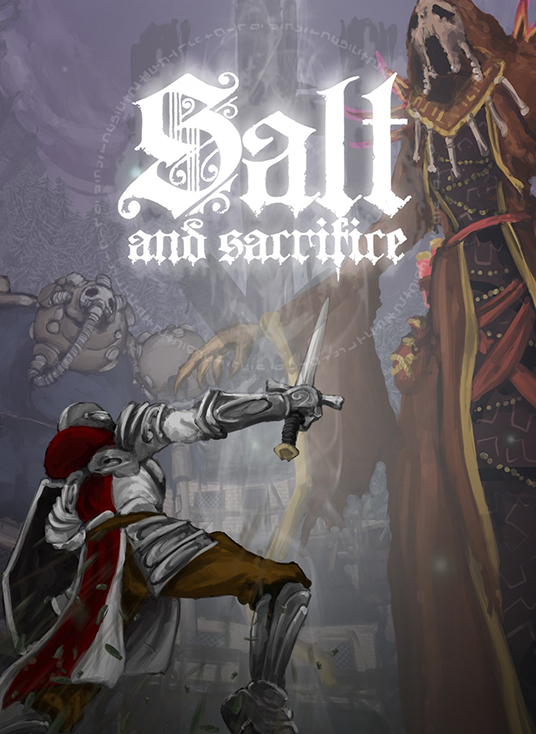 There’s a balance in power between the amount wanted and the effort to acquire it.  Generally the most power people need is that necessary to live their lives in peace, and it would be awfully nice if that was easy to come by.  The more unbalanced power is the more it becomes an arms race, until finally the winners get to stomp all over anyone who isn’t them, and by the time those on top have it all the effort of gaining it has become all-consuming.  The Mages of the outer kingdom have used their turned the settlements into a wasteland, running unchecked with the quest for power having long ago burned away the last of their humanity, so the Marked Inquisitors have been dispatched to bring them down.  It’s not a job anyone can survive but then again, the Inquisitors aren’t expected to.  They’re bound to the world and can die as often as necessary in their quest to bring some kind of peace back to the kingdom.

It’s harsh as criminal sentences go, being forced to die endlessly for what are innocuous crimes.  Salt and Sacrifice is the metroidvania action/RPG-sequel to Salt and Sanctuary, every bit as grimdark as its predecessor and the Souls games that are its primary influence.  At the start of the journey you’re nothing more than an exile with just the clothes on your back, conscripted into the Marked Inquisitors for whatever crime catches your fancy during the character creation phase.  Each crime comes with a unique item, but Salt and Sacrifice adheres to the Souls style of “learn by doing” so there’s no way to optimize the build this early.  That also extends to the choice of character class, which is just a list of eight options without any information as to how a Highblade is different from a Fighter or Paladin.  It’s a rocky start that forces the player to either experiment or adapt, or possibly hit up an FAQ before even beginning to play.

Once that weirdly unhelpful stretch of character creation is complete, Salt and Sacrifice moves into a quick tutorial that goes over the basics without even a hint that there are simple combat techniques that can add power to an attack, and which ends by the traditional “giant boss stomps the player flat with a single flutter of its all-powerful eyelashes.”  Thankfully that’s expected of the genre by now so is more of a rite of passage than rude awakening, and then it’s off to explore the safety of home base.  Finally, with all that out of the way comes the first real area of the massive adventure to come. 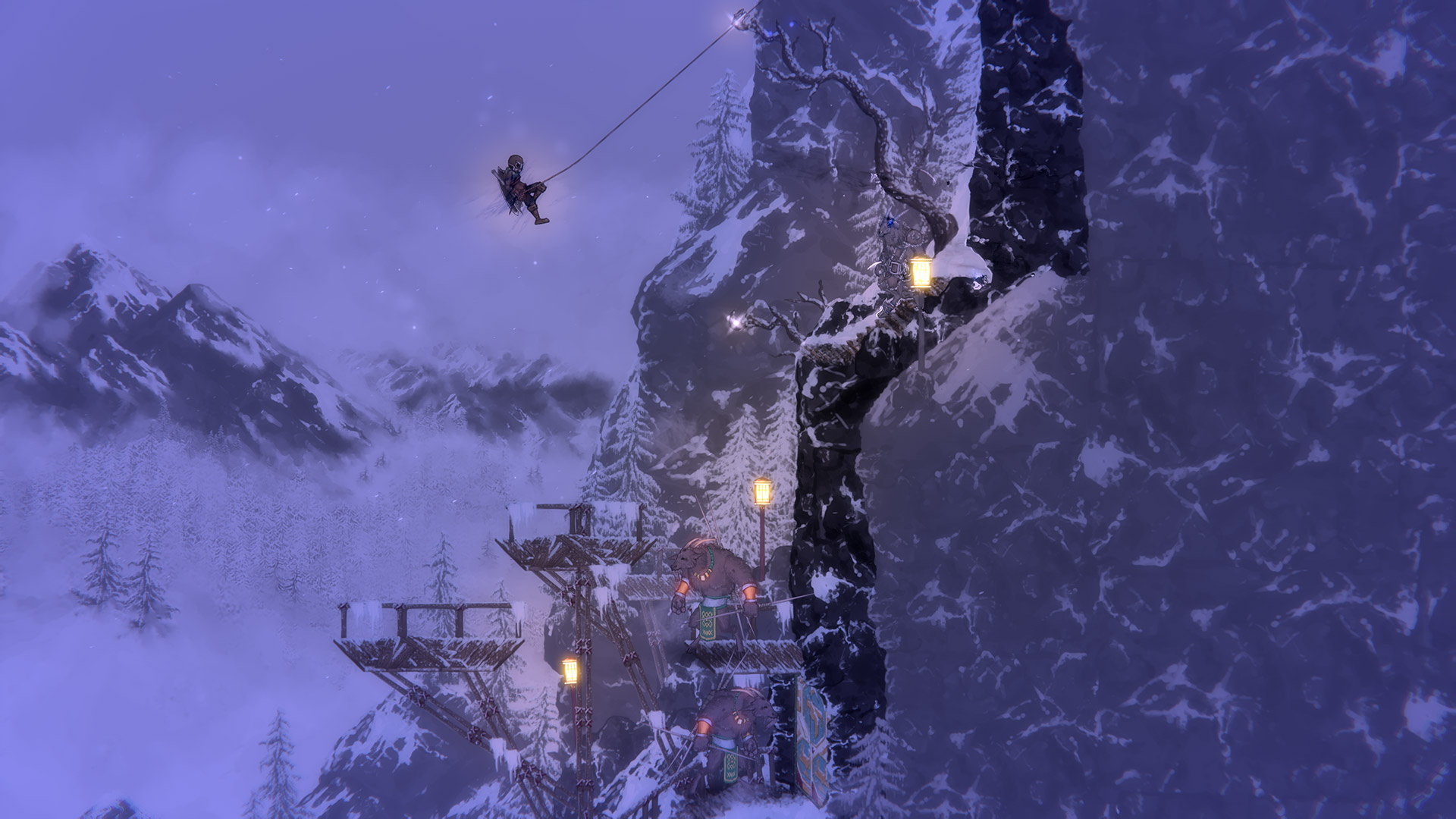 While the first impression is rough, the initial tutorial section reveals a little bit of gameplay, which is just enough to show that there’s going to be good platforming to go with the fast, tactical combat.  Once in the first area, the foggy, gloomy (just assume every setting in the game is gloomy, actually) Ashbourne Village, the brakes come off and the gameplay elements start to shine.  Platforming is the same for all characters, with a reasonable jump plus the ability to latch on and pull up onto ledges, and after the first mini-boss comes the grappling hook.  Various parts of the scenery, like tree branches or ceiling rings, can be latched on to with the player zipping towards the anchor point, and the level design gets wonderfully intricate as new areas loop back into familiar sections and grappling shortcuts are activated to connect everywhere.  The huge environments are great fun to explore, even when everything inhabiting them is trying to kill you.

Death is a constant threat in Salt and Sacrifice, because there’s nothing that’s harmless even when you’ve packed on a good number of levels.  Survival requires caution, patience, and good use of the dodge, block and parry mechanics.  Each of the eight character classes comes with a weapon that handles differently from the others, but it’s roughly the same across the board for general movement.  There’s a normal and strong attack which can be chained together for different types of strikes, and due to the stamina gauge you’ll need to be careful of getting carried away with the button mashing.  Both the dodge and block require stamina, and it’s easy to get carried away with the attacks only to find yourself trying to walk back from a crushing attack instead of rolling harmlessly through it.  The block button isn’t so effective at eliminating damage, but does minimize the pain, unless you time it perfectly with the strike for a parry.  Chain it all together and you can take on the biggest monsters and mages the game can throw at you, at least in theory. 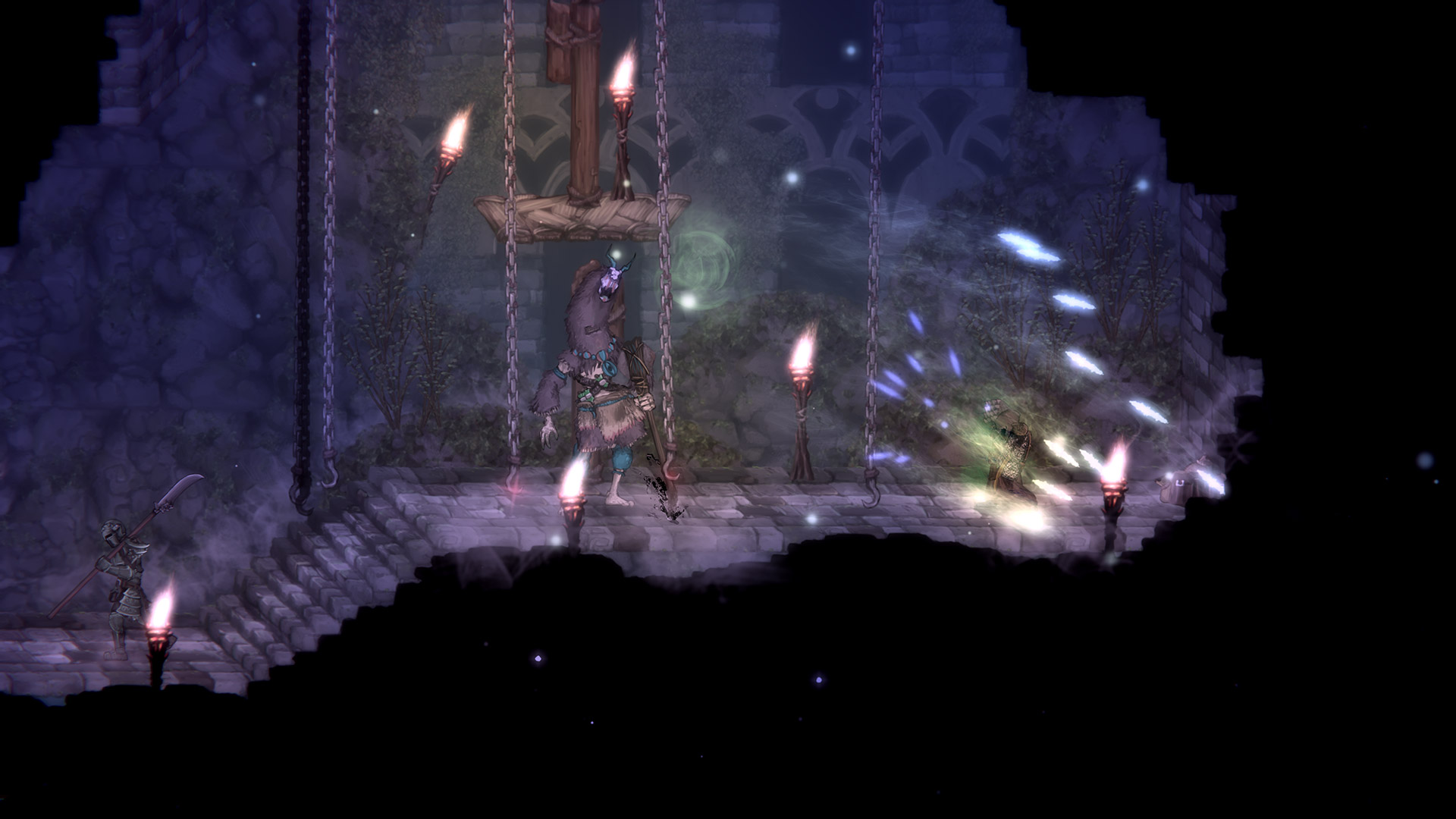 If all this sounds an awful lot like Dark Souls/Elden Ring, there’s no denying or avoiding the similarities.  The healing potions that restock at resting points are in there, as is the need to pick up your experience where it lies after getting killed.  Bosses are huge and merciless, and even regular fights can feel unfair when an enemy gets in a heavy attack that sends you flying off an edge to take heavy or fatal damage on the ground below.  Traps can spring almost without warning, although the signs are there if you know what to look for, and status ailments can do terrible creeping damage to the health bar if you’re not paying attention.  Salt and Sanctuary is a Souls-like through and through, but also somehow its own game as well.

What sets it apart is the metroidvania-ness of it all, with a huge part of the game involving the platforming elements that can allow you to practically fly through an area rather than get bogged down fighting every scrub monster along the way.  There’s no question it takes a bit to open the routes, but shortcuts are everywhere once you’ve earned them, allowing you to focus on the task at hand as you chase after the latest Mage.  The goal of each area is to clear it of Mages, after all, and it takes several encounters as you track its indicator-trail across the level to pin it down in a final confrontation.  Mages come in two styles, named and un-named, with the first encounter being the named version and after that an unnamed version can be found randomly wandering the level.  The more you’ve killed in a zone the more likely it is that multiple different Mages will spawn near each other, and it’s more than a little entertaining to hang around just out of reach while their minions and the regular level enemies all fight each other. 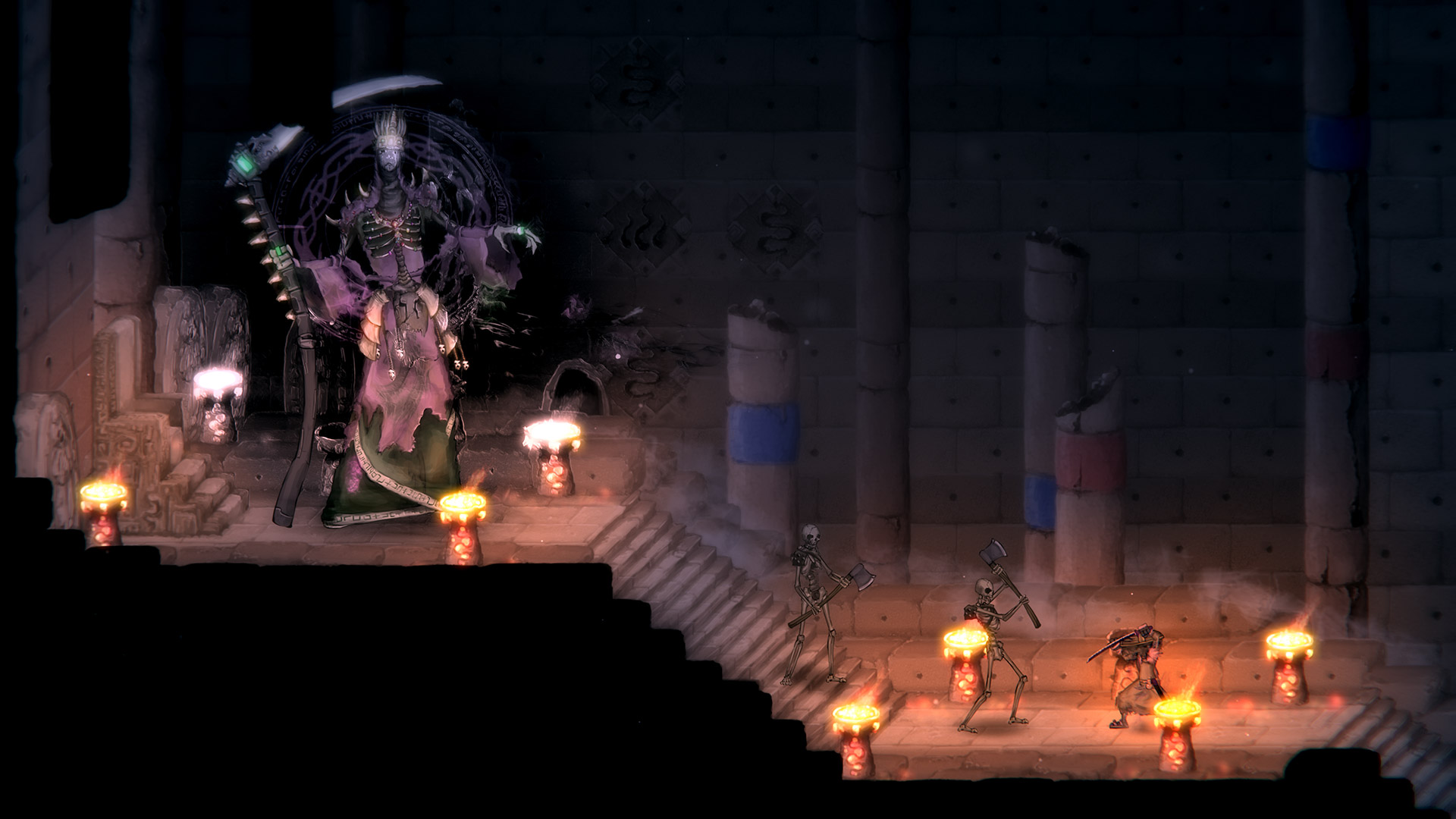 While the opening can be off-putting, Salt and Sacrifice is a huge game that picks up almost instantly once you’re past the beginning, with multiple large areas that will each take a good amount of hours to explore and track down all the Mages that roam there.  The combat can feel unfair at times but this is generally rare, and usually means you need to approach with caution and rethink a strategy, plus maybe power up a bit back at home base.  The relatively-empty base at game’s start slowly fills up with new residents as you find them in the levels, each with an ability that ranges in usefulness from helpful to indispensable.  Once you’ve opened up a few areas it’s easy to flit from exploring one, chasing after a quest in another, or pushing on past the difficulty curve in the latest section.  Salt and Sacrifice doesn’t explain itself by words, which can make it hard to get to grips with, but when you let that go and just discover by play, the game gently drags you in and refuses to let go.