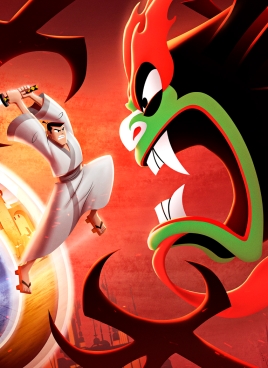 Since 2001, Samurai Jack has been both a compelling story and a franchise that hasn’t gotten a truly great game. The Adult Swim revival of the show in 2017 led to a renewed interest, however, and the rise of the Adult Swim Games brand made it a natural fit for a new game to hit the market. Now fans of the show have a new piece of media to consume with the fifth season ending and leaving its fanbase wanting more. Here you get a plot taken from the finale of the show — offering up an alternate take on key events. As one would expect, Samurai Jack: Battle Through Time is a hack and slash game that aims to create an experience that replicates the look and feel of the show.

The time-traveling samurai has not only a sword to defend himself with, but his bare hands. With each weapon comes their own pros and cons. His fists deal out more damage, but are higher-risk since you have to get up close and personal to use them. They’re a great tool against hordes of easier enemies where you want to avoid having your health chipped away and range isn’t a massive concern. The sword is better when it comes to putting distance between you and your opponents, but doesn’t deal as much damage per-strike as fists do. You have light and heavy attacks and can combine the two in any way you see fit — allowing for cool combos, especially when you do things like start off with punches and then switch to the sword to do things like land a massive downward sword slash to take out an enemy. The short-range combat is satisfying and nothing tops soaring high and then slicing three enemies up at once with a single sword slash. It’s a rare feat, but one that drives home just how much you can truly do when you’re in close quarters against a sea of enemies.

Whether you use a sword, fists or even a bamboo stick to deal out damage, you need to be as mindful to avoid damage as you are doling it out. The defensive strategy is robust, allowing for blocking, parrying and a slick evasion technique that enables you to minimize damage taken throughout the adventure. Other anti-frustration features include having NPCs like Da Samurai, The Scotsman and his daughters aid you on your quest with power-ups, repairs for weapons and health pick-ups to ensure that Jack can survive all of Aku’s minions. They’ll attack from near and far and one cool thing is that you can use some of their weapons against them, leading to you gaining a long-range arsenal of your own. Taking out an archer unlocks being able to use a bow and arrow — with a satisfying trigger action for both the left and right trigger for pulling back and focusing your shot reticule on the left and firing with the right. This also applies to guns, which you can obtain from Aku’s more militant allies. These deal out more damage than the bow and arrow, but ammo isn’t as plentiful. Between Jack being both a sword expert and then marksman, all he needed was a heist or two to feel like a one-man band version of the Lupin the Third cast. He’s already got Goemon’s swordplay and Jigen’s gun skills down pat. 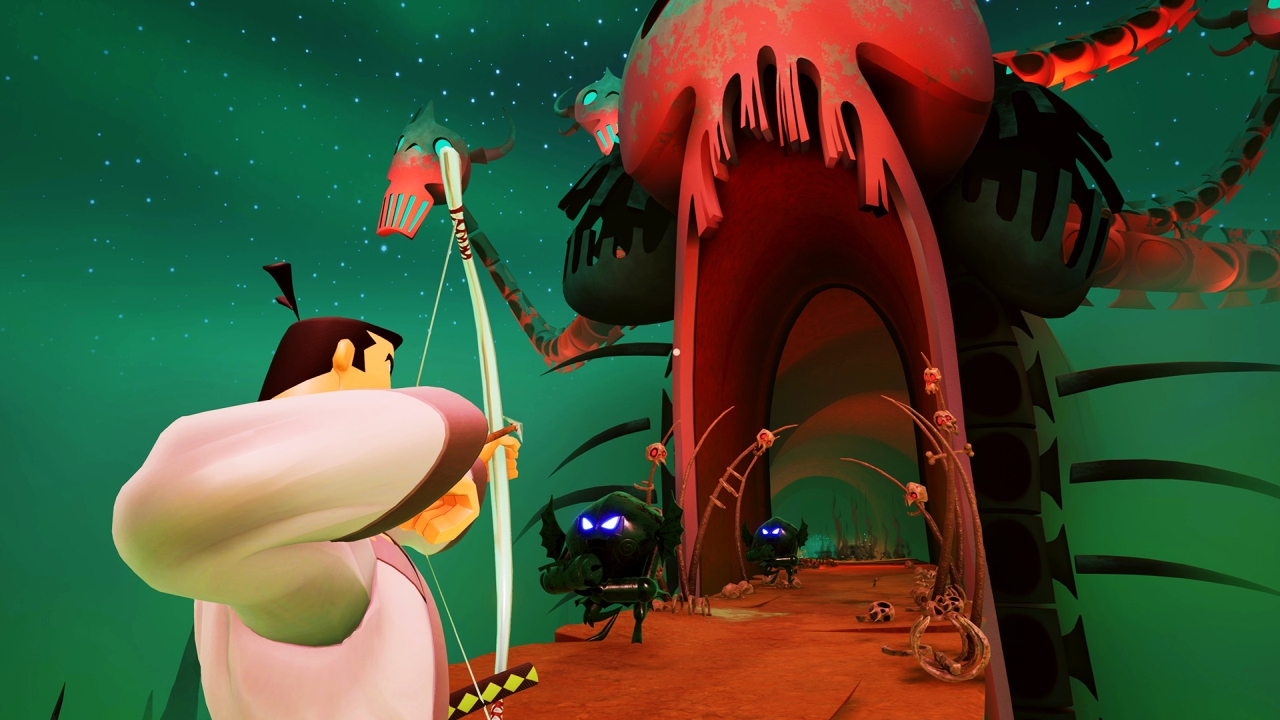 It’s amazing just how well-crafted the combat is because it’s so easy for licensed games — especially now — to skimp on any semblance of depth. Here, you get a wide variety of things to do and have a lot of variety in not only how you do battle, but what you battle with. You can go into a closed-off area and choose to be a close-range specialist with either fists or swords, or choose to battle a wave of outdoor enemies with arrows and gunfire if you so desire. There’s a lot of freedom and you never feel locked into one style of combat, as even if some enemies are more vulnerable to it, you can still fight with something that stacks the deck against you a bit to increase the challenge.

While combat is fun, however, the game does have flaws exposed by its combat-heavy nature. Environments are large, but largely empty, with quite a few spare rooms that offer the bare minimum of room you can call explorable for the sole purpose of gathering more money and little trinkets to aid in your journey. This works as a nice way to minimize needing to buy health pickups, but also serves to pad out the experience as you spend two minutes beating a wave of enemies, but spend five to explore the three surrounding rooms as they give you a couple of small boosts here and there to refill a supply of ammo and the like.

It’s a shame that the experience is hurt by the filler, because the core action is so good that if the experience was streamlined, you would have a top-shelf game. Instead, you’re left with a game that excels with combat and light platforming, but a disappointing game design loop. Another issue is that its corridor-heavy stages look similar and there’s no map or mini-map. While this is a largely linear adventure and you’ll always have NPCs to act as guideposts, you can easily find yourself going around in circles to move things along. When combined with the filler-ish content, you wind up with an experience that can’t help but feel like the end result is less than the sum of its parts. 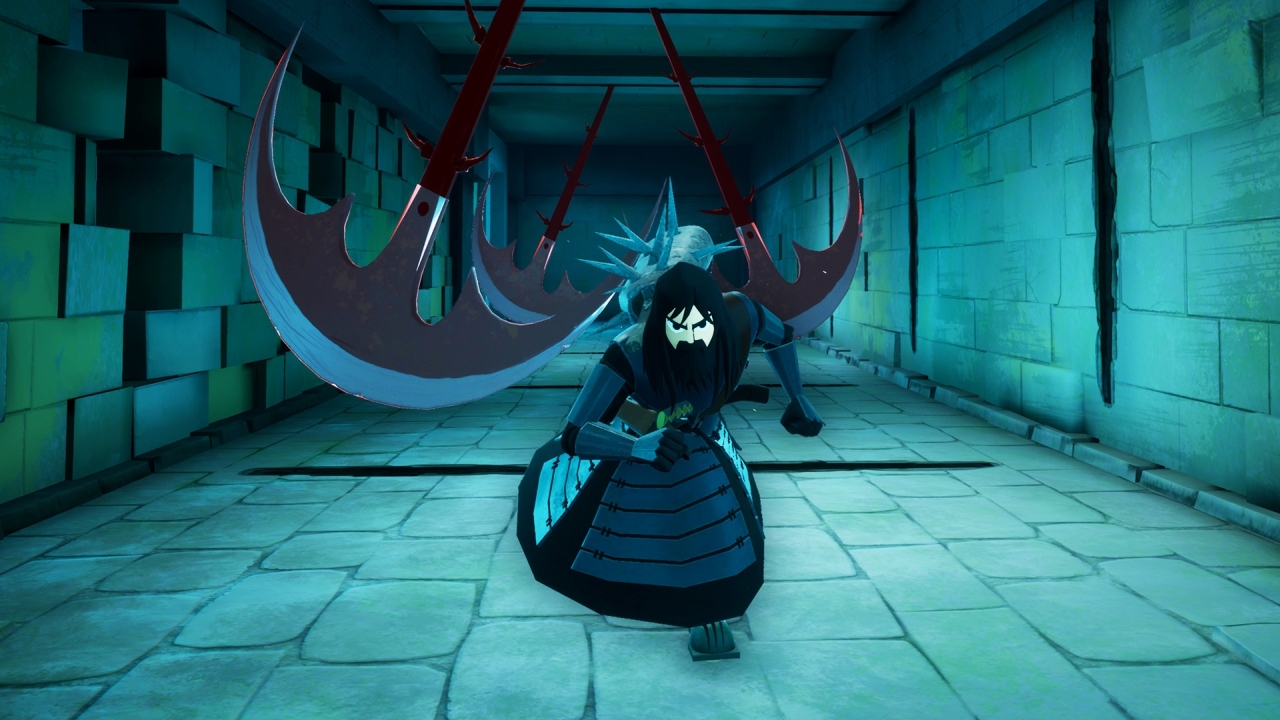 Visually, Battle Through Time nails the franchise’s signature art style — only with a polygonal look outside of the 2D animation used for major plot-related cinematics. The end result is a good-looking game that features a consistent framerate either on TV or in portable mode on the Switch. The character textures look good and it’s impressive to see robots hacked to bits on-screen and have no slowdown, but there are some low-quality textures visible on environments. Sometimes, they’re only visible when you’re up close to them and taking part in zoomed-in platforming segments — but there are also times when you’ll do something like open a chest and see pixellated textures litter the inside of it. There are also some attire clipping issues that crop up from time to time that hurt the presentation a bit. The game looks good overall, but does have some iffy elements that hurt the experience slightly.

Thankfully, Battle Through Time nails it when it comes to its audio. Beyond outstanding voice work from the show’s cast, the soundtrack is rock-solid and the sound design as a whole is impressive. Being surrounded by foes has an element of danger to it that wasn’t expected as you’ll hear them surround you and attack. With a quality set of headphones, you can get a better idea of where they are in relation to you and take them out in a more efficient manner. The soundtrack’s woodland music is great, while Da Samurai’s more modern-day hip hop helps add some diversity. There’s a lot to like about the audio and it’s one of its strongest aspects. 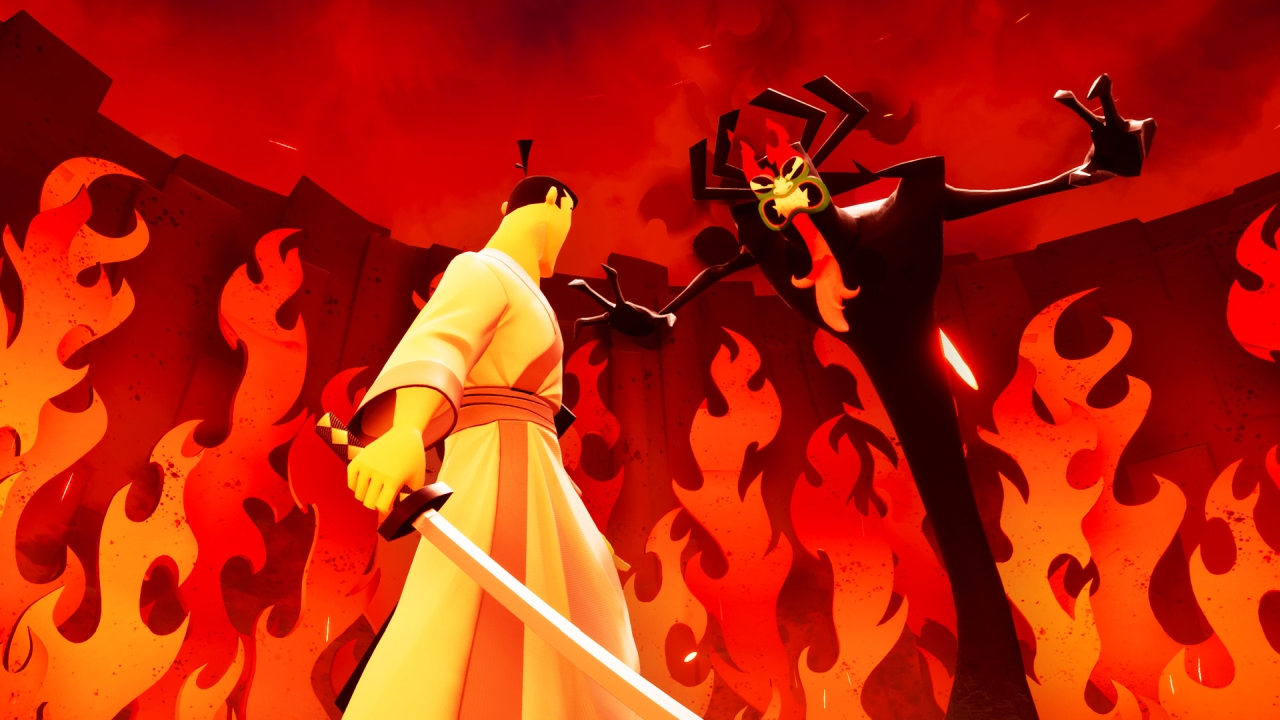 Samurai Jack: Battle Through Time is a great-playing game that falls just a bit short of being a well-crafted overall experience. The filler-filled stages and wave-based enemy rooms bog down the experience and get in the way of the fun. It’s a shame too as the core gameplay greatly exceeds the norm for licensed fare and delivers well-crafted swordplay, gunplay and melee combat all in one package. Beating up enemies is satisfying, but tackling waves of them in a weirdly laid-out labyrinth chips away at things. The graphical design is sharp and nicely matches the show, but is hurt by low-quality texture work from time to time. The sound design is top-shelf and not only fits the show, but makes you appreciate playing with a nice audio setup to better-discern enemy locations. Fans of the show will enjoy the game, while those just looking for a well-crafted action game may be disappointed.