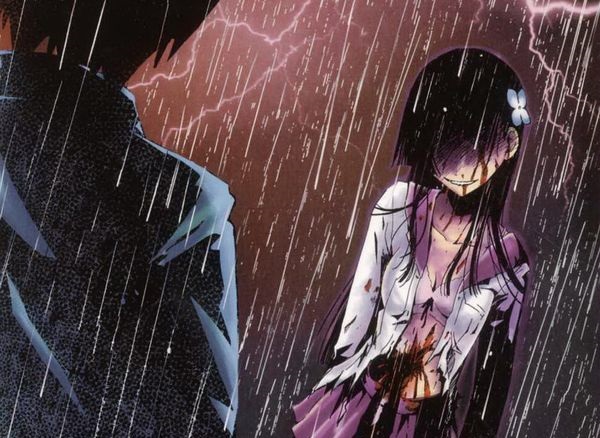 Sankarea: Undying Love is what the film Warm Bodies should’ve been — a zombie love story about a seemingly normal teen and his undead sweetheart which radiates an enough charm and enchantment to capture the heart of any living reader looking for an alternative to the usual anime suspects. To say it even more plainly, though, the opening volume of Sankarea sets the stage for a tale that is sure to delight zombie fans and romantics alike, beautifully bridging the gap between classic love ballad and grotesque reanimation thriller.

Our story starts off with Chihiro Furuya, a pretty typical high school student with infatuation for all things zombie related. He loves zombie books, comics, films, video games and just generally anything that revolves around the living dead. Chihiro has a particular fixation on zombie girls, however, finding them the hottest thing since Dead or Alive Beach Volleyball. In fact, it would appear that our young hero is not really into mortal chicks at all, mostly deriving his late night pleasures from the thought of walking corpses of the XX chromosome. Needless to say, our leading man is so intrigued by the zombie craze that much of the early part of this first installment is focused on him trying to reanimate his cat, aptly named Bub-chan, who has recently died.

It would seem that Chihiro cherished Bub-chan almost as much as he fancies the walking dead at large. Naturally, he figures marrying these two loves will bring his faithful pet back to life, while also proving that zombies can in fact exist. In this regard, Undying Love feels a little like Frankenweenie. We see that Chihiro truly adores Bub and is willing to do anything to bring him back. Unfortunately, his initial attempts yield no results due to the fact that he can’t identify the last ingredient in a spell he saw in an ancient book that focused on reanimation.

As our story progresses and Chihiro searches for answers on how to perform the resurrection of his feline friend, he ends up running into a young girl from a well-to-do family named Rea Sanka. Rea attends the Sanka academy and is a something of a big wig in town thanks to her prestigious parents and their illustrious ties to the community. Rea is sort of the opposite of Chihiro in that she has no true passion in life, primarily as a result of her controlling and oppressive parents. In fact, that’s how the two meet; one day Chihiro bears witness to Rea screaming her lungs out down into an abandoned well. After sparking up small talk, the adolescent gal learns of Fuyura’s attempts at bringing Bub back to life and wants to join in on the excursion.

Thus, the two begin to get closer as they try to revive the old cat. They finally figure out the last ingredient in the reanimating spell and decide to bottle up the recipe. For whatever reason, Rea ends up taking one of the bottles of this elixir home, but not before they try it out on Bub himself. To their surprise, the revitalizing ambrosia works as Bub pops to life and shoots out the window of Chihiro’s room, scampering off into the trees. Wide-eyed and filled with emotions ranging from overjoyed to flabbergasted, the two decide to call it a day after their efforts in capturing Bub net them a big old check mark in the loser’s column.

After the successful experiment, Chihiro walks Rea home. Regrettably, Rea’s parents see that their beloved daughter has been gallivanting around town until the wee hours of the morning with a young suitor, and are none too happy it. When she arrives home, she is yelled at and sent to her room. She eventually eavesdrops and hears that her father has plans to do something horrible to the one responsible for the “defiling” of his daughter, in this case Chihiro. This ultimately prompts Rea to drink the potion she and Furuya concocted, but nothing happens as a result of it — not right away, anyhow. Eventually, though, Rea dies in the story, but comes back to life because of the drunken tonic. Naturally, she only confides in Chihiro who decides to take her in, and thus the spontaneous nose bleeding begins as the young teen tries to curb his enthusiasm for marveling in his dream come true.

There’s more to Sankarea’s story, of course, but we don’t want to give away more than we already have. At its center, Undying Love is a romantic-comedy with bits of suspense and action thrown in for good measure. The dynamic between Rea and Chihiro is top-notch stuff, and writer Mitsuru Hattori delicately builds their relationship so that the reader feels truly invested in their future independently and as a single unit. Their interactions are clever, witty and at all times entertaining, mixing in just the right amount of humor, friendship and on occasion a little more; this well-crafted balance makes volume 1 a true page-turner. What’s most impressive about the story is how Hattori knows exactly when to pull back on the comedy to put something more serious front-and-center, and when to provide readers with hilarious side-bars and internal dialogues for all characters involved.

Speaking of the characters, Sankarea features a fairly large cast despite the majority of the book honing in on just the two leads. Chihiro has a handful of friends and family who play larger roles in the opening segments of the book, and Rea’s parents, though not shown off as much as we would have liked, are at least highlighted to the extent that readers will understand just what kind of influence they have on their daughter. That being said, the secondary characters feel a bit underdeveloped overall. Although this is only the very first volume in the series, we wanted to know more about Chihiro’s friends, since they initially take on such sizable functions. At the same time, it’s clear that Hattori wanted to introduce readers to the core of the story, which naturally meant much of volume 1 needed to stress the relationship between Furuya and Rea. Interestingly enough, Bub-chan is probably the third largest character in the read, which gives folks a unique attachment to the undead kitty.

That’s perhaps one of Sankarea’s most prized feats — it has a delightful way of making readers really care about its main characters. There’s one scene in specific where Chihiro is suddenly struck with overwhelming guilt regarding how selfish his actions are with the revival of Bub. In this portion of the book, readers will immediately feel for Chihiro as he realizes that perhaps Bub-chan is where he needs to be, and that he has no right in tampering with the process of death, no matter how much it could quell his aching heart. It’s a tender moment that made us smile, as it emphasized a sort of existential understanding of the living, the dead and that indescribable feeling of longing for having back the loved ones lost throughout our lives.

The adaptation work of Lindsay Akashi is also wonderful, making the read an even easier one. There was not a single instance where we read over something and thought it was clumsily translated. In fact, much of the book’s humor can probably be attributed to the excellent localization job by Akashi, who clearly understands comedic timing and verbiage.

The technical aspects of Undying Love are also worth mentioning. While the art itself is fairly standard stuff, it’s nevertheless clean and sharp, concise where it needs to be and expanding during scenes that require more detail. Unfortunately, many backgrounds in the panels are seemingly devoid of life, or just plain empty. Outside of that, characters are all drawn quite well — even if they lack any type of extreme merit — in addition to being fantastically expressive at all the right moments. What’s even better is how Hattori uses the art to really tell the story at times when words drop out. For instance, Chihiro is drawn in SD at times when comedy is stressed over seriousness. It’s a small inclusion, really, but one that we’re glad is there. It’s also significant to note that the use of paneling is solid from start to finish. Never once did we feel thrown off, confused or taken out of the read because of poor panel use or placement. In fact, it has some of the better use of panels that we’ve seen in a while.

In the end, Sankarea: Undying Love is a heartfelt tale that touches on the most humanistic emotions such as love, loss and hope. It features clean art, flawless dialogue and characters that are diverse and wholly unique. The tale at large may not break new ground, but it doesn’t need to, as how it’s delivered is what matters most here. It has some issues, sure, but on the whole, this is a great first installment in what we hope is an equally as delightful series.