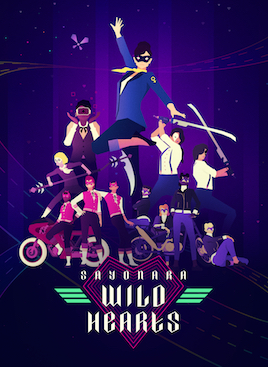 Simogo’s latest game, Sayonara Wild Hearts, got me thinking a bit about concept albums. They’re grandiose works of music that form intriguing narratives, but they tend to be mostly associated with rock, prog, metal, etc. Rarely do we ever see concept albums for traditional pop or dance music. And even those that do produce hit singles, such as works by Duran Duran and Halsey, don’t really feel like they’re remembered as concept albums. It feels like the last thing close to a pop concept album that made a notable impact was Daft Punk’s Discovery, arguably due to the Interstella 5555 animated film that went with it.

Perhaps that’s part of its success. Artists such as Coheed and Cambria, Alice Cooper, and Mastodon have no problem weaving together complex tales as various rock acts. But a lot of pop music tends to rely on being simple and catchy in order to gain a mass amount of attention, thus it tends to rely on more visual mediums like videos to accompany the music whenever it wants to drive home any story even further. Or in the case of Sayonara Wild Hearts, craft an entire game. A “pop album video game,” to use the terminology offered by it. And I guess what I’m trying to get at with these opening statements is that if no one truly remembers any pop music concept albums, they will now. Sayonara Wild Hearts is a unique gem, both as a concept album and a video game.

Labeling Sayonara Wild Hearts with a genre has proven to be tricky. At its basic core, it’s an arcade game. Mainly a runner. And a rhythm game. With shoot-’em-up segments, first-person driving, boss battles, slight bullet hell, the Bonus Stage from Sonic the Hedgehog 2. And yes, Queen Latifah is here for the game. She serves as the narrator, setting up and bookending our tale. Despite being a short game, there is a lot to take in. 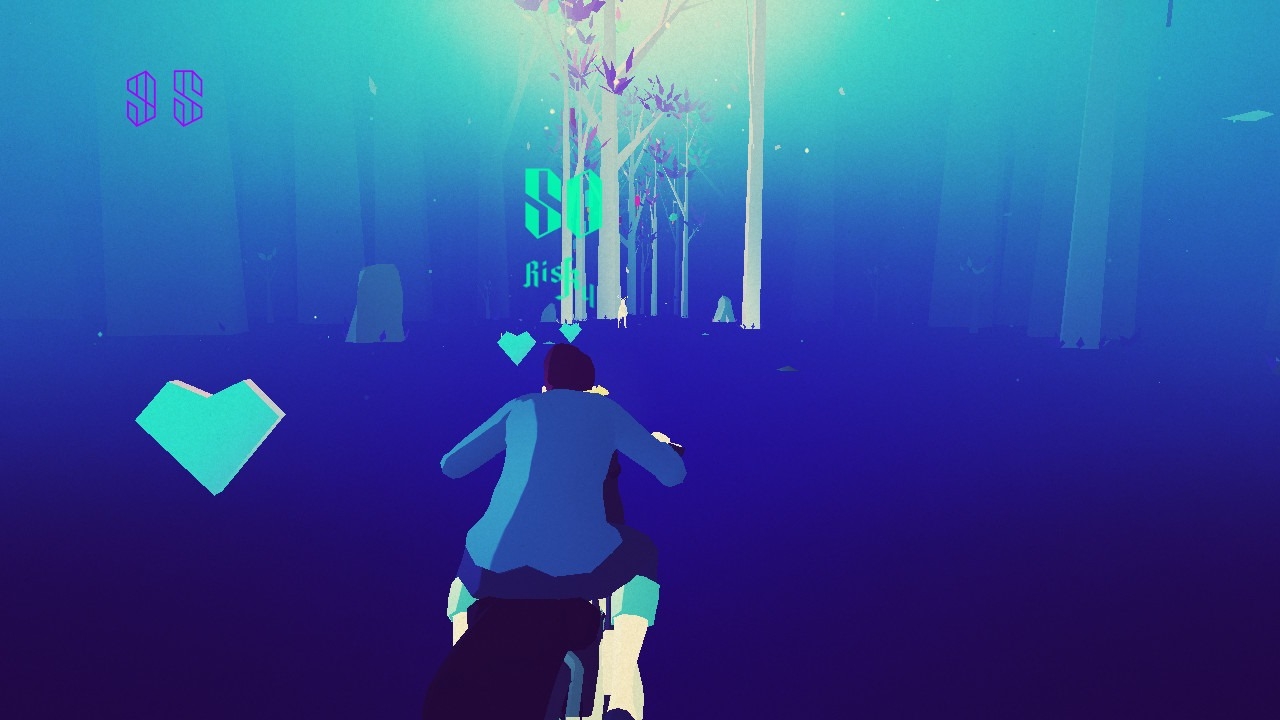 Long ago, in a distant realm, three arcana ruled harmoniously until a rogue arcana and their allies stole all of the harmony. Using a broken heart, they used the shards from it to create a butterfly that heads out and seeks someone strong enough to save the world. And that would be where our heroine comes in. Having recently experienced heartbreak of their own, they follow the butterfly that finds them, get sucked out of the skylight in their room and head into an astral highway where they become The Fool, who now sets out to defeat their new rivals.

In case you couldn’t tell, tarot cards play a major part in setting the stage for Sayonara Wild Hearts, with various cards either serving as the basis for tools such as motorcycles or bows and arrows, or characters such as the five major pop acts that you have to battle along the way. After traversing an astral highway to get the area that they reside in, you’re introduced to the mysterious masked musicians you’ll be battling, such as Stereo Lovers, Howling Moons, and Hermit 64. The result is an inspired world filled with some truly outstanding, colorful graphics, and a lot of unique character and level designs. Mind you, it may be hard to notice how good it all looks when traveling by at breakneck speed, but to say that things are stylish would be an understatement. 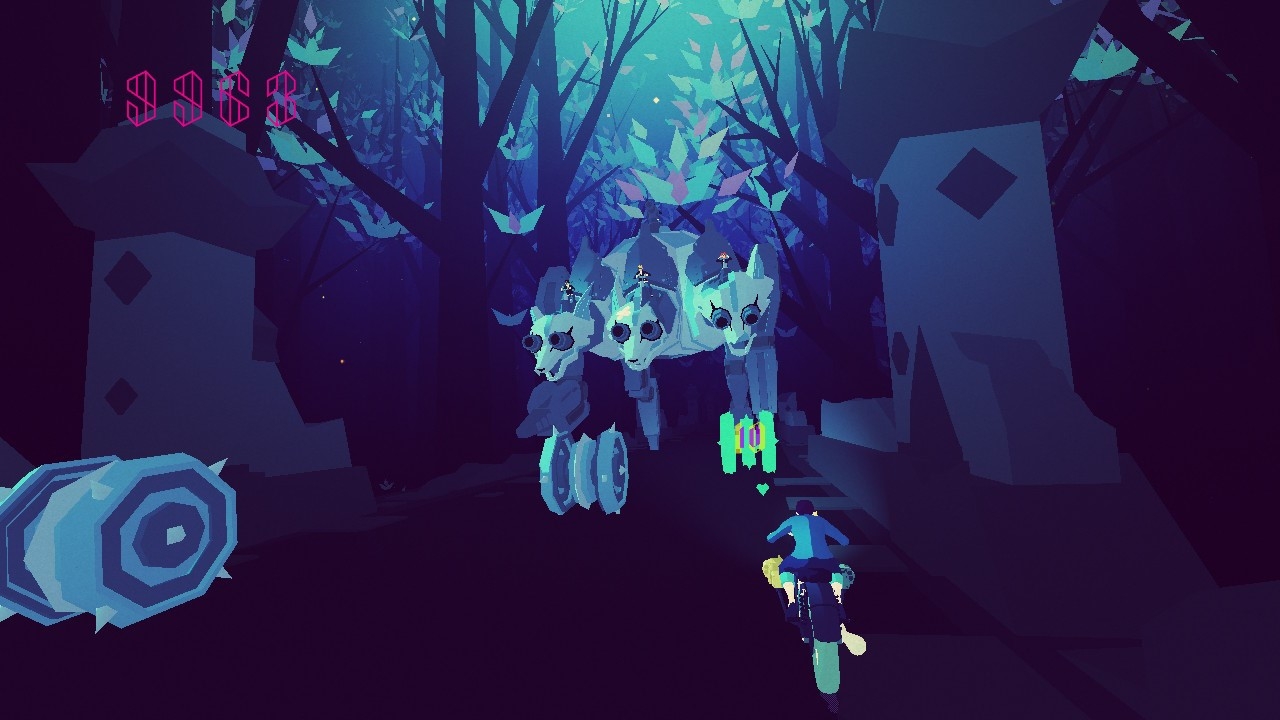 The style and breakneck speed do go hand in hand, though. Based on what’s been said earlier, one may get the impression that things are rather complicated, with a heavy dose of gameplay roulette. It may seem overwhelming at first, but it actually becomes easy to understand. Again, the core gameplay is largely that of a runner, with everything automatically scrolling by at a gleefully fast pace while you dash from side to side, avoiding obstacles and collecting hearts along the way. Each level and boss has their own gimmick, though, such as dosing you with mushrooms in order to make things wavy, snapping between two different planes of reality in rhythm,or requiring you to drive a more difficult-to-handle car that nicely shakes things up a bit.

But yes, the gameplay in Sayonara Wild Hearts can change at the drop of a hat. For example, a battle with the Howling Moons may start out like a normal runner, and then the next thing you know, you have a pair of miniguns strapped to your motorcycle that automatically fire, and now you have to gun down robot wolves on top of the regular runner gameplay. Or while racing around on a deer, you may receive sudden prompts to jump in time with the music in order to get from platform to platform. Or you may find yourself sucked into a virtual world, moving down wireframe corridors in first-person, before winding up in a retro arcade game. 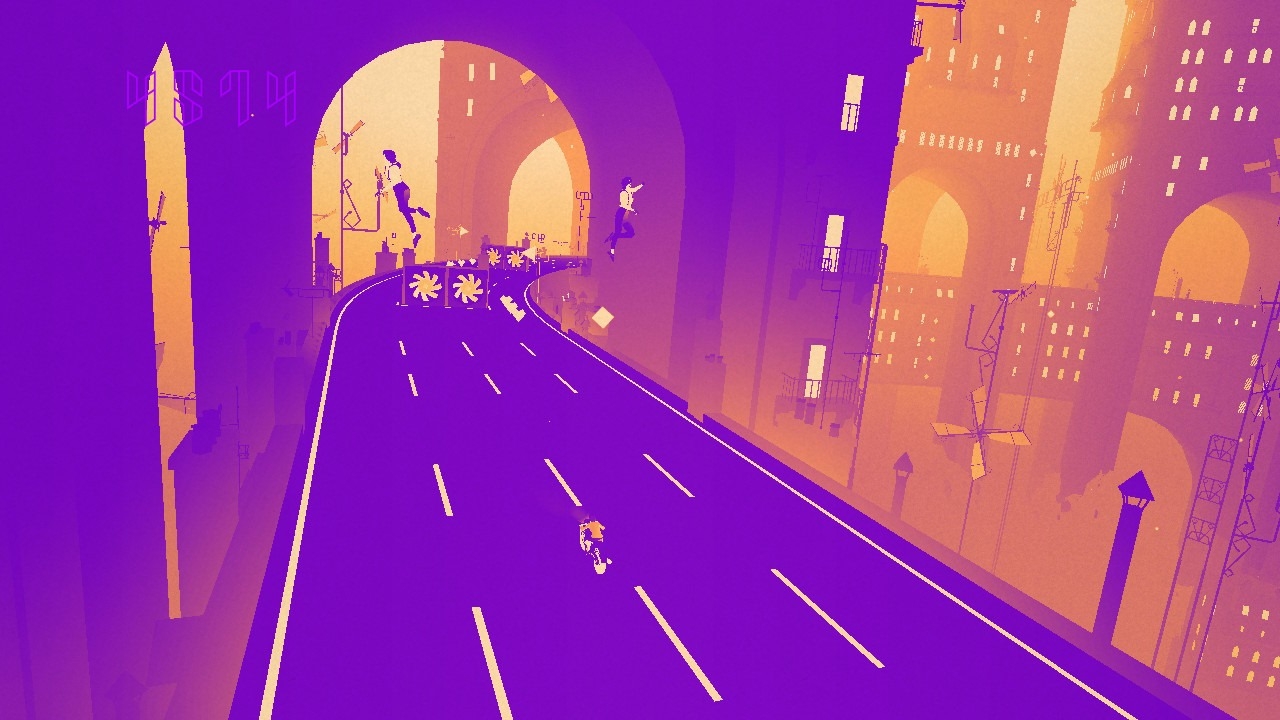 It’s crazy, yes. And it is glorious. It’s fast-paced, challenging, almost anarchic stuff that keeps you on your toes. It helps that despite sometimes having mere seconds to get introduced to a new mechanic, figuring each one out is as easy as pie, as Sayonara Wild Hearts presents every change in such a way that instinct immediately kicks in. It helps that any slip-up here simply results in the player being sent back a few seconds or so (along with one other drawback to mention soon), with the music even rewinding. And every new mechanic controls well and is extremely fun to figure out and master, merely requiring a single joystick and button. It’s several different genres and gimmicks, but presented in an easy-to-understand package.

Now, you may be thinking that if death is just a slap on the wrist, where does the challenge come from? Well, I said this is an easy-to-understand package, but becoming a pro at everything is still hard to master. As the only real flaw in Sayonara Wild Hearts is its brief length (being the length of an average pop album, it only lasts about an hour or so), it does have to find various ways to extend its replayability. And thus the goal isn’t simply to complete each level, but to shoot for the highest score as well, showing a bit of classic arcade roots for the game. The various hearts you collect along the way each increase in points, so the longer a streak of hearts that you have, the more points you get. But like any rhythm game, mess up and the counter is reset, and hearts begin at one point again. 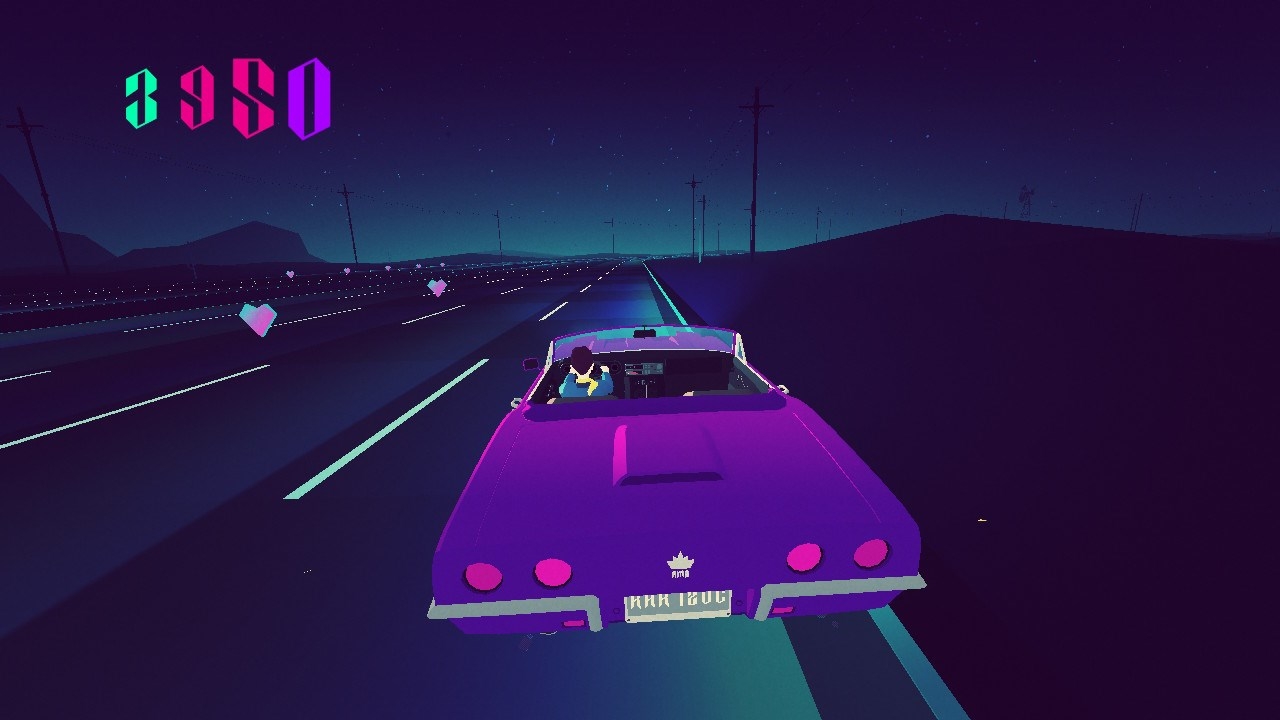 So yes, the challenge is in trying to complete each level as flawlessly as possible, aiming to get the highest rank, if only to hear Queen Latifah congratulate you with a majestic “Gold rank!” at the end of each stage. Getting Gold ranks in every stage unlocks extra content on top of the Arcade mode earned upon beating the game for the first time, which allows you to play through the game without any breaks and aim for one massive total score. And just in case you need something extra, there are the mysterious Zodiac Riddles, little achievements to aim for that give you certain goals (like defeating a boss by only pressing one button when needed), but provide the instructions via cryptic means. I’m not sure if there’s a reward for solving them yet, but it’s a cool touch.

Wait, hold on, the review is ending and I haven’t even discussed the music yet? Wow, okay, well, I thought it was kind of a given, but Sayonara Wild Hearts has an absolutely amazing soundtrack. Given that one of the complaints I’ve heard about the current pop landscape is that it sounds a bit dreary, Daniel Olsén and Jonathan Eng provide the perfect antidote here with an amazing array of synth-filled, upbeat tunes, perfect for racing through forests and abandoned cities as you score extra points for narrowly slipping by obstacles and taking risks. Linnea Olson’s vocals also provide the perfect cherry on top when appropriate, and the end result is a sonic symphony that does indeed tell an exciting, thrilling and emotional tale of love and heartbreak. Like any good concept album. 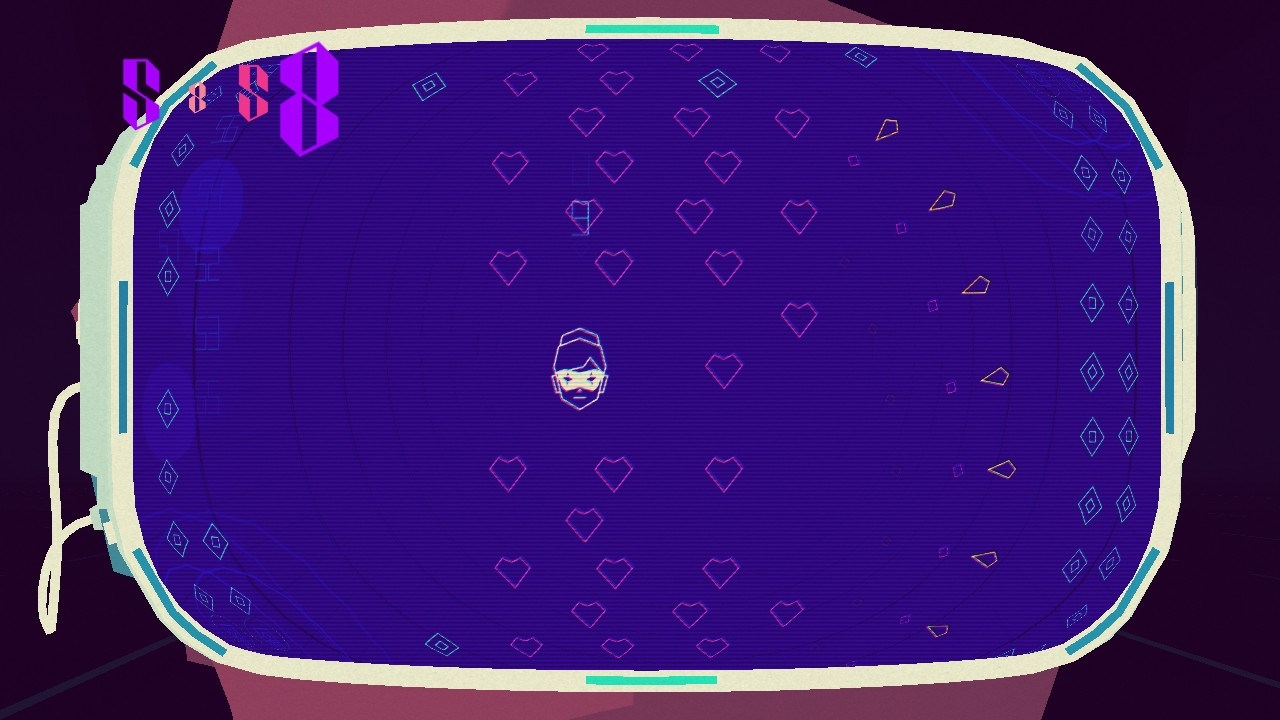 Let it be known that one needs to really play Sayonora Wild Hearts in order to truly experience it. Everything here describing the game honestly can’t do it justice. The graphics are a pure blast of neon joy and the soundtrack is absolutely stellar, but when combined with simple yet addictive gameplay that takes so many wonderful twists and turns, it creates this sort of trippy experience that you only see once in a blue moon. This is easily some of Simogo’s best work and should not be missed out on. Now if you’ll excuse me, I need to play this album over and over again just for the tunes alone. “Wild hearts never die, wild hearts never die…”