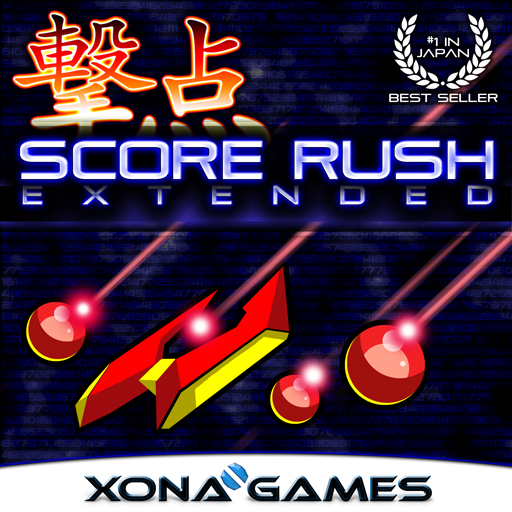 The original Score Rush has been a long time gone, but the nice thing about the remake era is that a good game doesn’t have to stay dead forever. Score Rush Extended is a complete rebuild of the Xbox Indie Games twin-stick vertical shooter, preserving the gameplay and level structure but adding online scoreboards and a new gameplay mode. It’s pure stripped-down bullet hell madness, trimming away the genre’s excesses and leaving behind a straightforward scoring system that rewards speed, efficiency and the ability to thread your way through dense swarms of brightly colored enemy firepower.

Score Rush Extended is the story of a ship that has a whole load of enemies to clear out before reaching the eighth and final boss. The enemies come in a variety of colors and fill the screen with bullets, sometimes firing randomly and other times cutting the screen into smaller and smaller areas bound by impenetrable streams of fire. It’s not exactly a complicated scenario, plot-wise, but who needs justification for collecting so many powerups and options that you throw back twice as much laser death as comes your way?

That power is deceptive, though, because the ship is a one-hit wonder. The hit box is a 2×2 pixel in the middle, clearly defined and always visible, but it only takes one of the hundreds of bullets on screen at a time to wipe it out and do terrible things to your scoring potential. The scoring system works on speed, with enemies dispatched quickly getting more points than those you allow to hang around. The scoring difference on the regular enemies averages out over time, but the mini- and large bosses want a fully-charged ship concentrating as much force as possible to max out their scoring potential. This is hard to do when you’ve lost all your options in a badly judged break for a safer section of screen, though.  Using one of your three bombs clears out all bullets in a screen-wiping wall of explosions but they don’t restock on death, so it’s easy to play too conservatively and save a bomb for later that would have been better used keeping you fully-powered now. 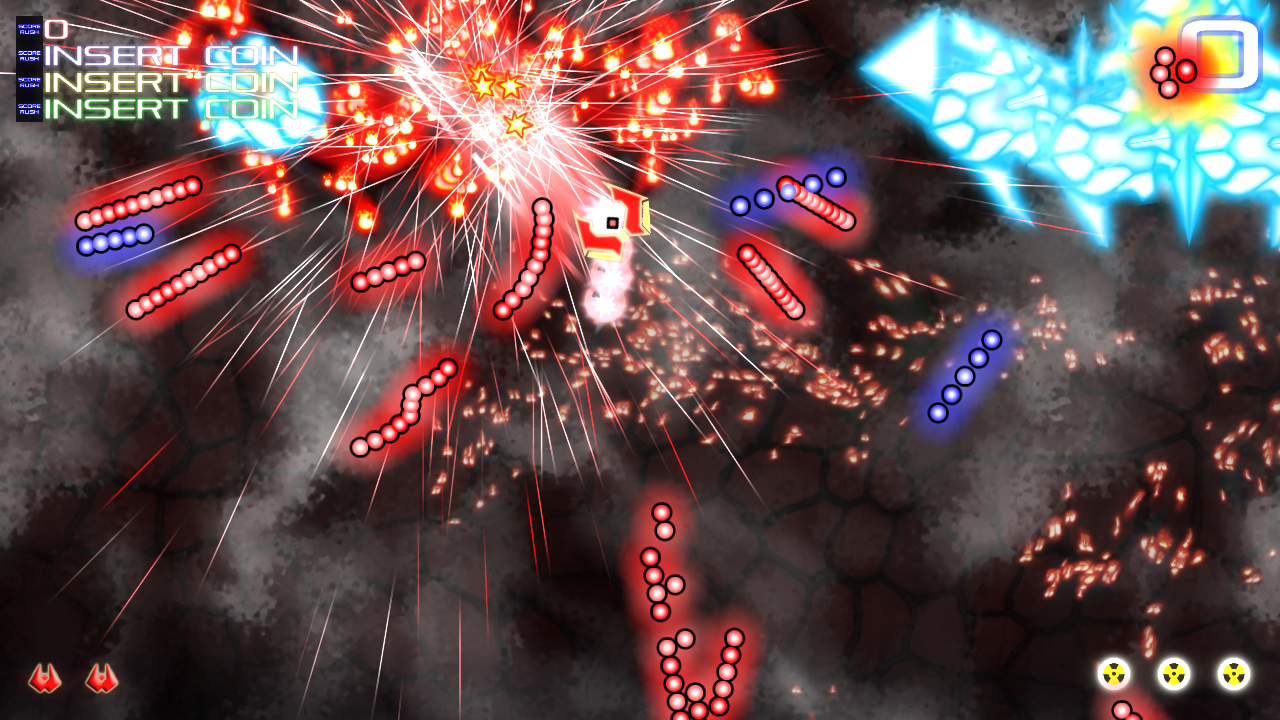 There are two power-ups in Score Rush Extended, one for the laser (P) and another adding a new option (O) to your rapidly-growing tail. The upgrades stack to a ludicrous degree, and the first ones appear even before the enemies start poking their heads down from the top of the screen. By the time the fight begins (about 10 seconds in) you’ll have upgraded from a single-shot laser to a fairly impressive spread, with a couple of little blobs following along in your wake sending their own smaller streams of fire after yours. Survive long enough and you become the spigot for a massive torrent of destruction, followed by up to 32 options all contributing their own part to your unrelenting laser dominance. Death sees most of your gun powerups scatter across the screen to be collected by the next life, but all the options are gone until new power-up pods wander by.

What this means for scoring is that them that has, gets. If you’ve got a lot of power, you get a lot of score, and this is helped by the bonus you get from collecting power-ups when the gun is maxed out. It’s a wonderful moment when you realize you’ve got as much laser as possible, because suddenly each floating (P) (and (O), if you’ve got all 32 options trailing behind) changes from perking up the gun to sending out a red wave of bullet-canceling relief. The ship has a fairly large area of power-up suction, so just getting near will see it hoovered right in, which is both blessing and curse when you’ve got a few floating around the arena. On the one hand it feels great to navigate your little 2×2 pixel hit box through a dense weave of bullets knowing safety will meet you halfway, on the other hand it hurts a bit to waste a second potential life-saving collectible due to it also being within range.

And that’s the whole thing right there-  fly, dodge, shoot, dodge, collect, mind the bullet swarms, power up to insane levels, and above all, don’t get hit.  Score Rush Extended is bullet hell stripped down to its basics, with no story and art good enough to illustrate the action and be flashy without needing to render anything more than the abstract enemy blobs.  The real draw is how well the bullet-hell action plays out, with each section tuned to a wonderful intensity and the movement of the player ship and bullets in perfect proportion to each other.  It doesn’t take much practice to be able to slip between narrow passages in the bullet streams, and beating the Normal difficulty is actually a reasonable accomplishment.  Expert and Godlike are another story, of course, but you can unlock those difficulties by completing the previous one in any other mode.  Single-player is nice but you can never go wrong if you’ve got three friends to join you in a trip up Bullet Hell Lane.  If you really want to go nuts you can even play in Dual mode, with each player getting two ships, each ship having the potential for the full firepower upgrade, and that includes 32 options each.  Sadly, that level of overpowered offense wasn’t able to be tested for this review, so while it sounds nice it’s not part of the final score. 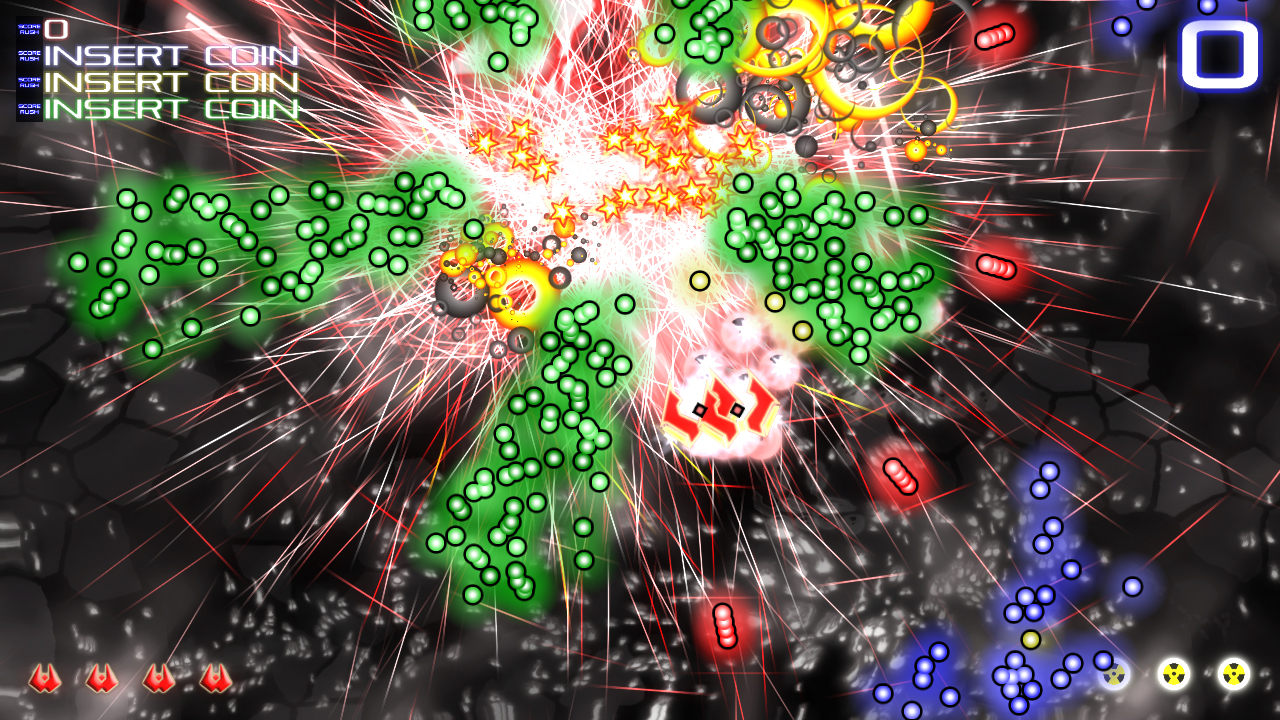 Score Rush Extended is a fantastic remake of what had already been an excellent shooter.  The combination of twin-stick shooting with vertical bullet-hell gameplay works perfectly and the clarity of the action and precise controls gives you the ability to play like an arcade god with a little practice.  The Normal difficulty is tuned to be beatable by mortals (like me) while Expert is a strong challenge and Godlike sounds terrifying, and the sheer volume of bullets coming from and firing towards the enemies makes an incredible light show for players of any skill.  The simple scoring mechanics still give room for skilled players to dominate the online leaderboard and it’s far too tempting to fire up one more round of shooting to see about earning a better position.  Score Rush Extended is a refined and polished throwback to the basics of the arcade shooter and that rare hybrid that’s got something to keep both the novice and expert gamer returning for one more round to sharpen their skills against its colorful wall of bullets.