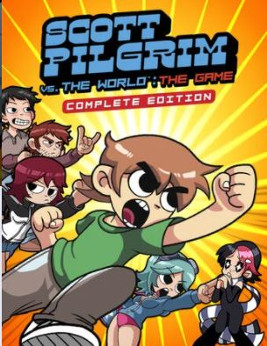 Scott Pilgrim vs. The World: The Game – Complete Edition

Scott Pilgrim hasn’t had the most conventional timeline when it comes to video games. Scott Pilgrim vs. The World: The Game was based on the graphic novels and released in 2010 to coincide with the film starring Michael Cera of Arrested Development fame. The first DLC pack introduced Knives Chau as a playable character and added the Dodge Ball and Battle Royale modes a few months after the initial release, and then the second DLC pack that added Wallace Wells as a character and online multiplayer was released about two and half years later in early 2013. As 2014 drew to a close, the game was delisted from Xbox Live Arcade and PlayStation Network, never to be seen again. That is until now as a remastered version appears on current-gen consoles in the twilight of their lives with both DLC packs called Scott Pilgrim vs. The World: The Game – Complete Edition.

For those unfamiliar with the plot, Scott Pilgrim is the 22-year-old bassist in the band Sex Bob-Omb who is dating 17-year-old high school student Knives Chau much to the chagrin of his bandmates and friends (note: Age of consent in Canada is 16, which is where this game takes place). Scott has a dream about Ramona Flowers, an Amazon delivery girl who he later meets which causes him to lose all interest in Knives and eventually break up with her. To further complicate the courtship, Scott simply cannot just start dating Ramona, first having to defeat each of her seven exes in battle. This is an unusual courtship ritual but does provide some context for a decent beat ’em up game.

Scott Pilgrim vs The World: The Game – Complete Edition follows the graphic novel and film’s style of incorporating video game imagery. The world map that Scott uses to navigate between levels and replay them is blatantly patterned after Super Mario Bros. 3. Nods to classic video games are common in the Scott Pilgrim universe with rival bands having names like The Clash at Demonhead. The NEStaglia is taken a step further in the game in the subspace level where Scott and company can earn extra money and there’s intentional visual distortions in the form of random letters and blocks which should look all too familiar to anyone who grew up playing the NES. 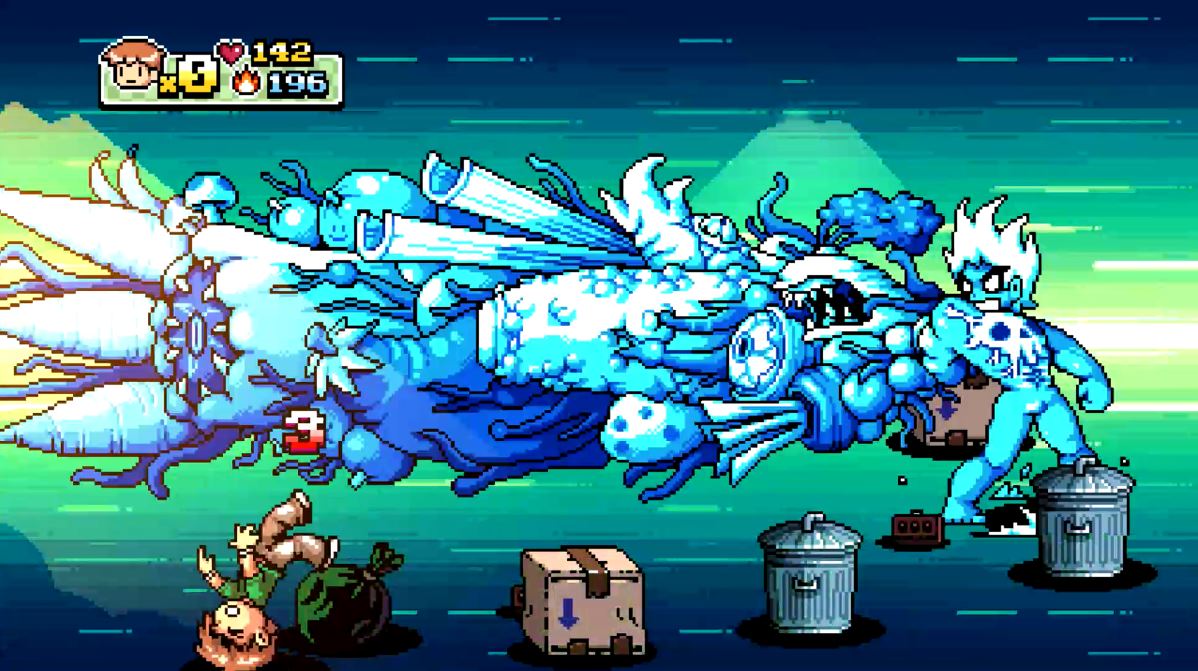 The gameplay in Scott Pilgrim vs The World: The Game – Complete Edition is typical fare for beat ’em up games that were popular in the ’80s and ’90s. The player can select to play as different characters which have unique moves and fighting style, but essentially play the same as each other. Other characters can be unlocked over the course of the game to work as summon assists. Random items, such as garbage cans and katana swords, can be picked up for temporary weapons and even knocked down enemies can be picked up and thrown as projectiles which fits the overall ridiculous tone of the Scott Pilgrim universe and game.

There’s some light RPG elements similar to games like River City Ransom where the player can buy items and food to increase characters along with being able to learn more fighting moves as the characters level up. Some of the expensive upgrades can make a big difference in difficulty and without upgrades many of the later enemies are huge damage sponges. The story campaign is fun enough and entertaining on single player, but as is the general rule with this type of game, it’s better enjoyed with friends. 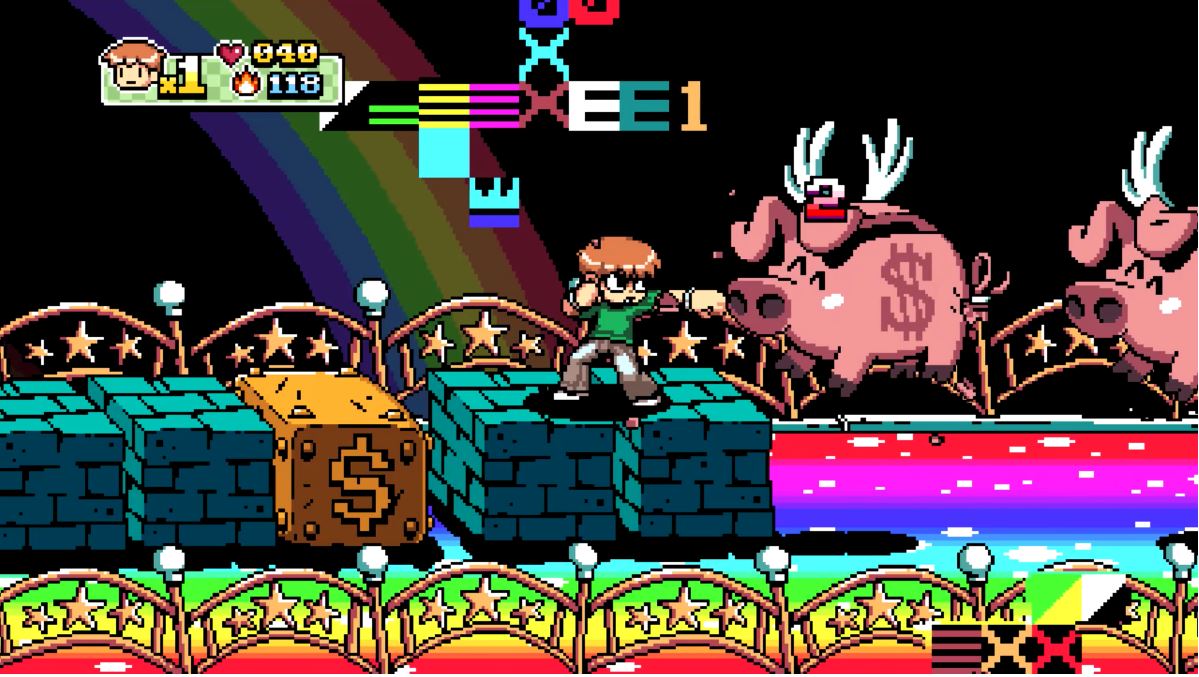 In addition to the main story there are a few bonus modes included in Scott Pilgrim vs The World: The Game – Complete Edition that provide gameplay variety but none of them are major selling points. There’s a Battle Royale mode that’s self explanatory what can be found there. There’s Dodge Ball where the objective is to knock out other characters by hitting them with a ball enough times. Lastly there’s Survival Horror, which is seeing how long you can last and how many zombies you can beat up before they eventually eat your brain. These are decent side attractions and enjoyable in small doses, but nothing that will likely eat up a lot of time.

With the deliberate 16-bit graphics Scott Pilgrim vs The World: The Game – Complete Edition doesn’t look any different than it did when it came on the previous-gen consoles a decade ago. Maybe higher resolution but nothing noticeable, but that doesn’t matter much with retro style games. It does have both DLC characters and the appropriate trophies and achievements included, so this does provide the complete Scott Pilgrim gaming experience if you missed out on the game after the delisting. The main campaign can be completed in just a few hours. 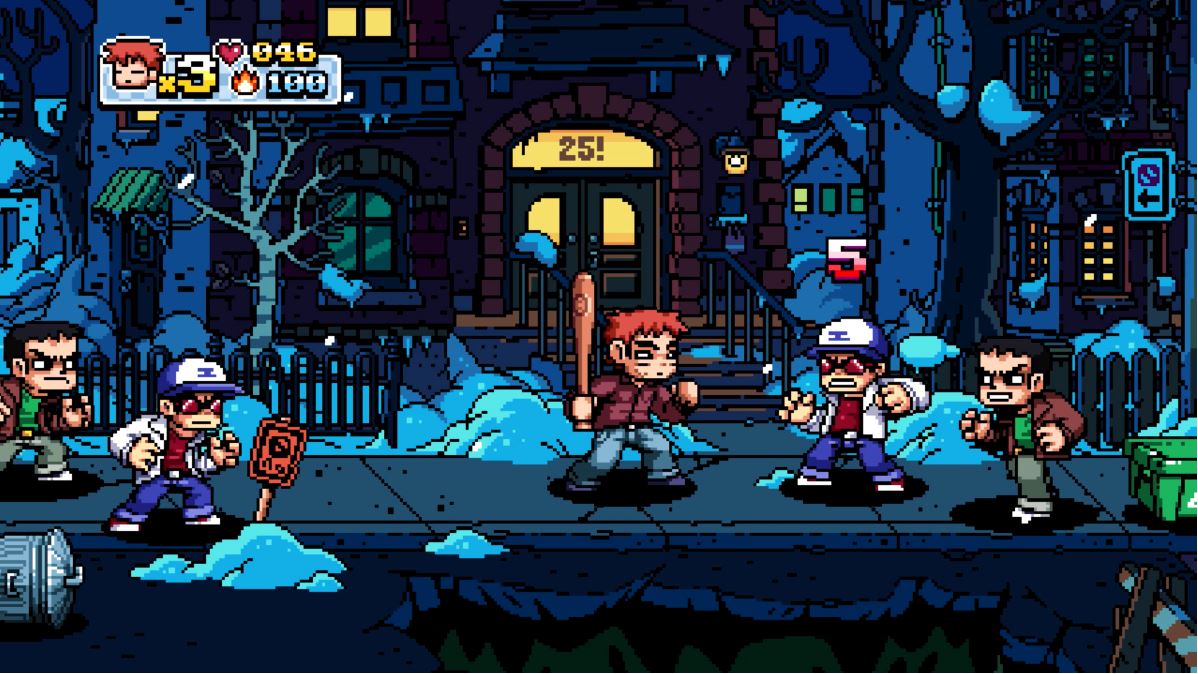 Scott Pilgrim vs The World: The Game – Complete Edition is an enjoyable throwback to beat ’em up games and having access to the game with all the DLC after its several year hiatus is a welcome return. Its short campaign makes it ideal to whittle away a few hours in a single sitting with friends. It’s patterned after retro beat ’em ups and does a good job of recreating an authentic retro experience. On its own gameplay merits it isn’t as good of a beat ’em up as other recent revivals or the best classics, but the outlandish and colorful game world and characters make the overall experience more enjoyable and memorable. For Scott Pilgrim fans and beat ’em up fans in general, Scott Pilgrim vs The World: The Game – Complete Edition is well worth your time.