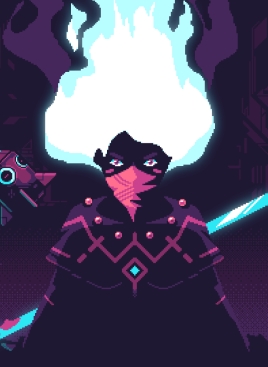 I’m starting to feel like playing so many roguelike games around the same time that I’m reviewing Hades is a bad idea. After all, as I mentioned in the review for it, Hades is basically a masterpiece, and as such, it’s also a perfect example of what roguelike games should aspire to be like in many ways. So it’s hard not to play any game in a similar vein and avoid making comparisons. And this has me worried when it came to ScourgeBringer, the new action-platforming roguelike from Dear Villagers and developers Flying Oak Games. When this year started, it was one of my most anticipated games of the year and I gushed over it in a preview from earlier. But now that it’s heading out of Early Access, does it still hold up in the wake of juggernauts?

ScourgeBringer takes place in a post-apocalyptic world where a monolith descended from the sky and quickly became the scourge of humanity by, you know, wiping out a massive chunk of it. Hence why the survivors have dubbed it the ScourgeBringer. Said survivors have also tried exploring it, looking for answers as to why the monolith or the beings inside of it have decided to annihilate humanity, believing that they must have committed some sort of sin. None of them have returned, though, and now it falls on Kyhra, one of the strongest warriors in Earth’s remaining clans, to enter and see if they can discover what others haven’t. Of course, what they immediately discover is a ton of deadly enemies standing in their path…

It’s not exactly the deepest story, and ScourgeBringer plays it light with the lore drips (well, at least until you beat the game for your first time). There’s an additional survivor and a few shopkeepers to talk to, but most of the early story bits are told via computer terminals you come across. They’re sparse, as you can explore an entire level and not find a single terminal, and they’re also brief story bits as well. The tale they do tell is interesting, but standard, and the world could benefit from being showcased more. 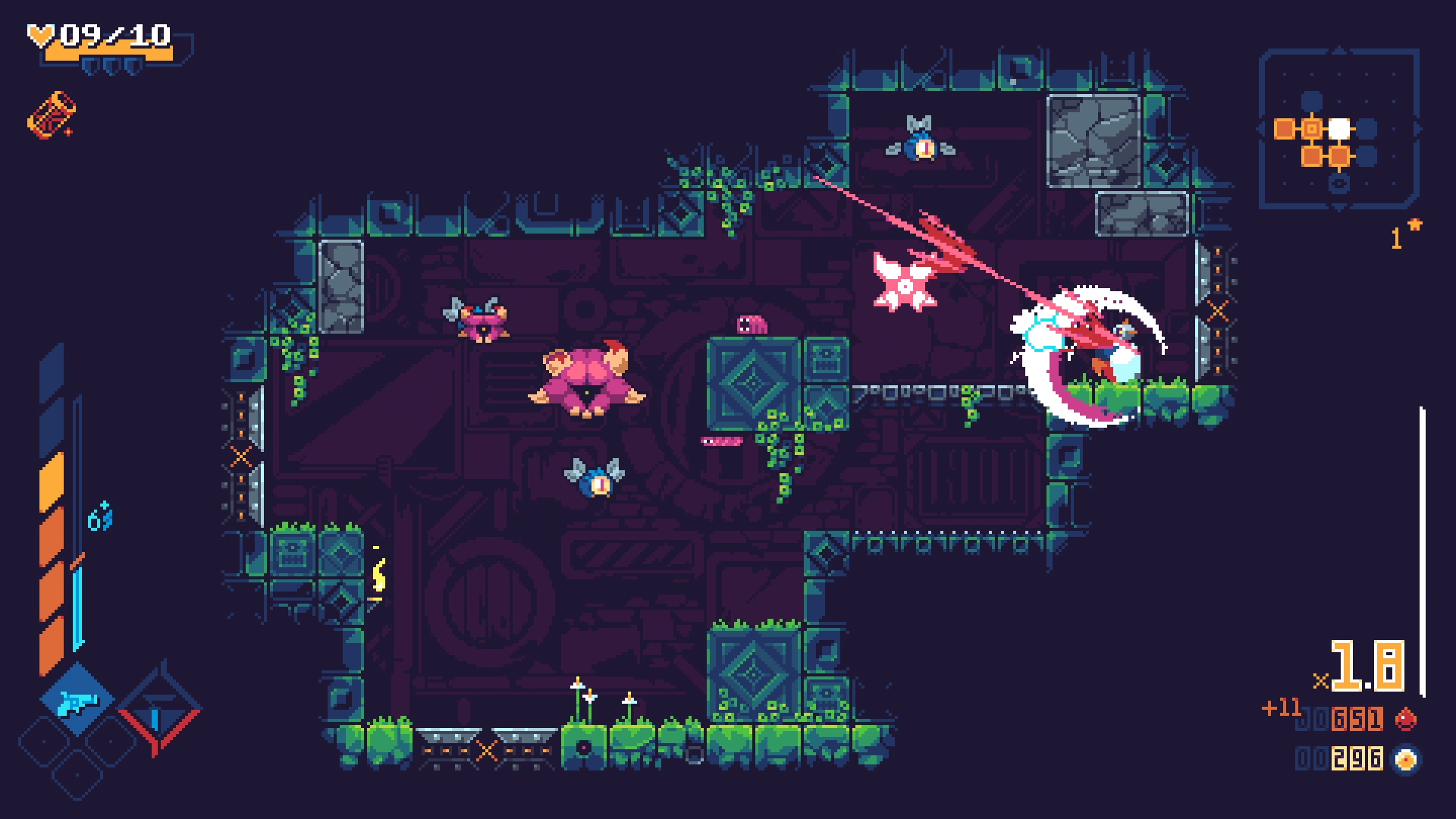 This creates a problem when it comes to creating a good gameplay loop that has you finishing each with a significant bit of progress. The other thing to mainly shoot for is to earn new upgrades from the Chiming Tree, a literal skill tree that acts as the hub. Here, you can add new skills and buffs to benefit you later like health boosts, the ability to stun enemies longer through various ways or a massive Fury attack that deals damage to every enemy on the screen. But the only currency used for these upgrades is earned from defeating Guardians and Judges (mini-bosses and bosses, respectively). And since you’re going to be underpowered at first, this means it’ll be a while until you perform several runs and master how to tackle each boss.

So the result of this is that ScourgeBringer can feel grind-y at times, meaning there’s going to be a good chance that it’ll be at least a few hours until you can make any significant progress, either when it comes to gameplay or advancing the plot, and it also means the game can come across as repetitive, at least during its early stretch. And that makes for a notable mark against the game as a whole, but that didn’t stop me from loving the hell out of it.

Sure, ScourgeBringer gets repetitive at times and is light on plot, but that flaw tends to take a backseat whenever you successfully have Kyhra run up a wall, flip off of it, air dash towards an enemy, smash them into another one, then dash over the two and slice them to ribbons in seconds, flipping over to the next enemy and clearing the room of two waves of foes without ever touching the ground, all in what appears to be the blink of an eye. It’s amazingly smooth and highly enjoyable combat, and it’s all surprisingly easy to pull off, making for superb platforming action. 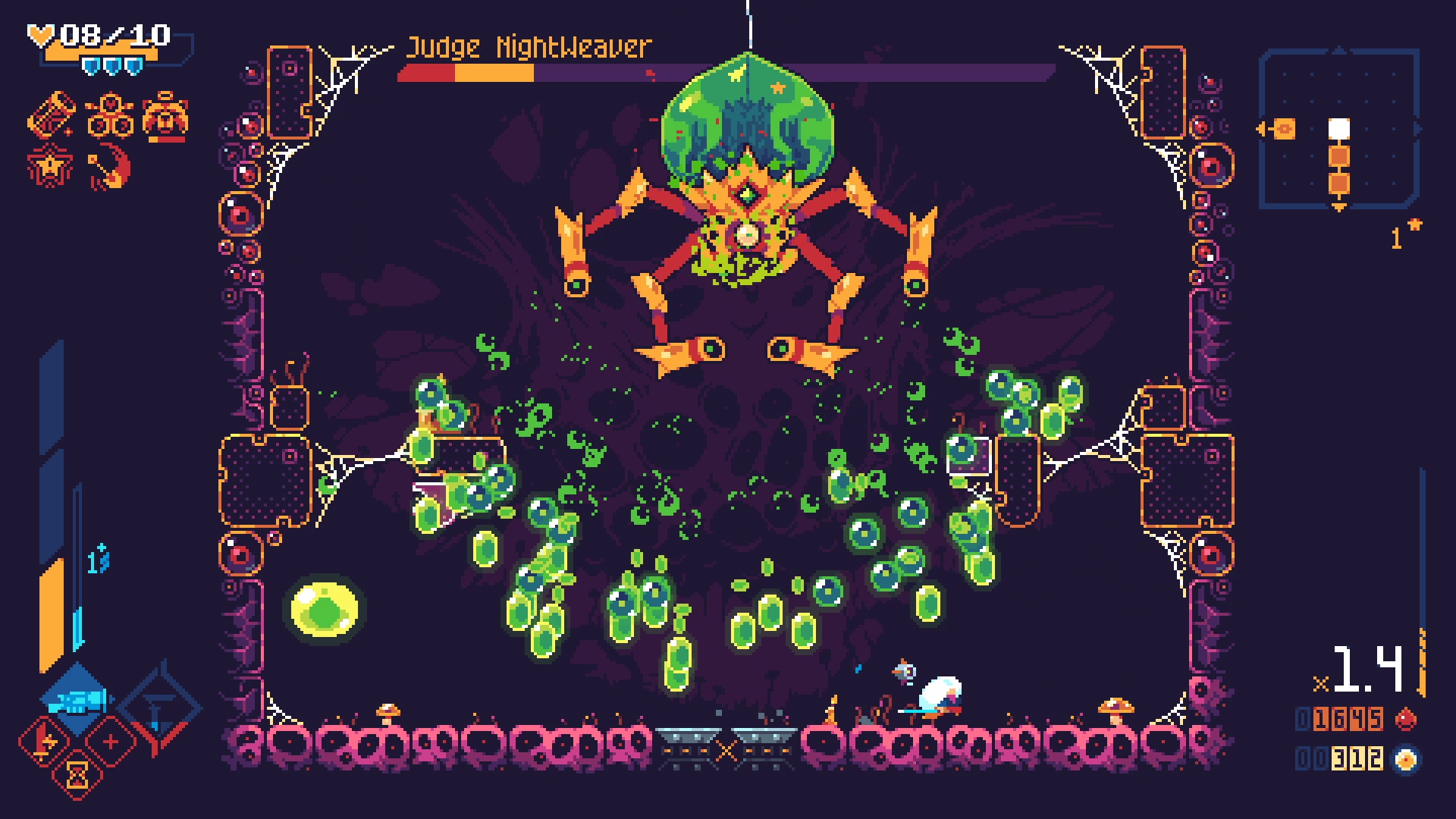 The proper way to approach ScourgeBringer is treating it like a classic arcade game. The action is lightning-fast, each run is nice and quick, and of course, everything is challenging. Things start out tough, but the difficulty climbs at a good pace as you progress, with the later levels almost heading straight into bullet hell territory. Speaking of which, the level design is nicely done as well (albeit with a few repeating rooms after a while), with each introducing their own unique enemies and hazards. It may start out with something simple like poison vents, but soon it escalates to platforms that bullets can pass through and portals that warp you around the room. Each new obstacle is hard as nails, yet it always feels fair, encouraging you to learn all of the ropes.

As mentioned earlier, though, the basic aspects of these ropes are simple. Jump, dash, heavy attack, gun, boom. But it’s combining all of these skills that makes everything tricky, yet fun. The heavy attack — a smash — is also used to stun enemies at the right moment, thus preventing them from launching deadly attacks as well. It can also destroy projectiles, or with an upgrade, even reflect them, which will be insanely valuable to learn. Of course, you have a gun as well, with several others that you can purchase along the way. It can come in handy (even if the swordplay is oh so more satisfying), but ammo is recharged over time through additional attacks, so you have to decide when the best time to use it is.

Actually, befitting for a game that basically involves exploring dungeon-like biomes, choice plays a huge part in how to proceed in ScourgeBringer. In each level, the main goal is to simply just find the room with the Guardian and defeat them (or multiple Guardians on later levels), which unlocks the door to the battle with the Judge. There’s also quite a bit to hunt for, though. You have the shops, of course, but then you also have altars where you can grab perks and buffs for each run, challenge rooms where you battle huge amounts of enemies in order to earn a mess of items that can help and hidden rooms with more bonuses. There’s even a bonus gift for successfully exploring every room, but there’s also a reward for completing a level as quickly as possible (and as a side note, the quick action makes the game feel like something perfect for the speedrunner crowd). 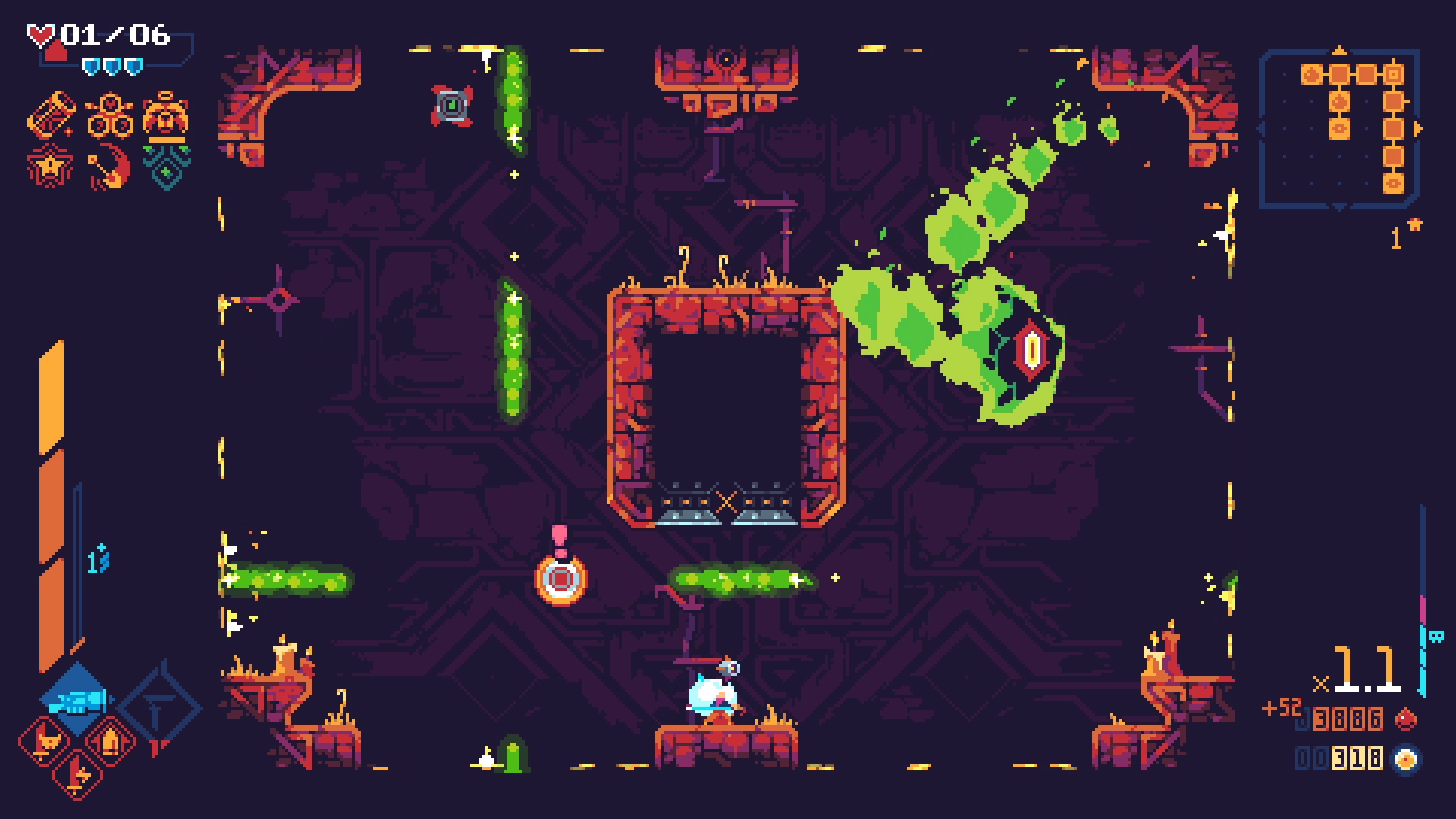 Speaking of the shops, you also have to pay in blood gathered from enemies (except for one who demands a payment of hit points) and a lot of their prices start out steep at first. So once you unlock the combo skill, now you have the option of going through with even more insane stunts in the hopes of earning more blood that can go towards a more powerful gun. Basically, ScourgeBringer handles the risk vs. reward portion of games such as these perfectly, having you decide quickly if it’s worth exploring an entire level and what the best approach to exploring it would be.

ScourgeBringer is another one of those games that succeeds thanks to the genius in its simplicity, as seen with its gameplay. Of course, it also helps that it looks and sounds astonishing as well. The pixel artwork is nice and vibrant, depicting a great variety of monsters with just the right touch of cartoonish expressions, still managing to make them look menacing, and giving us a good chunk of vibrant, detailed arenas to fight in. The soundtrack is also a gem, reminding me a bit of Mick Gordon’s work on both Prey and Doom, shifting seamlessly from otherworldly synth sounds while you explore to pulse-pounding metal tunes the moment you engage in combat. The end result is a highly-enjoyable package, with a post-game bonus that acts as the cherry on top…but that may be slightly spoiling things. 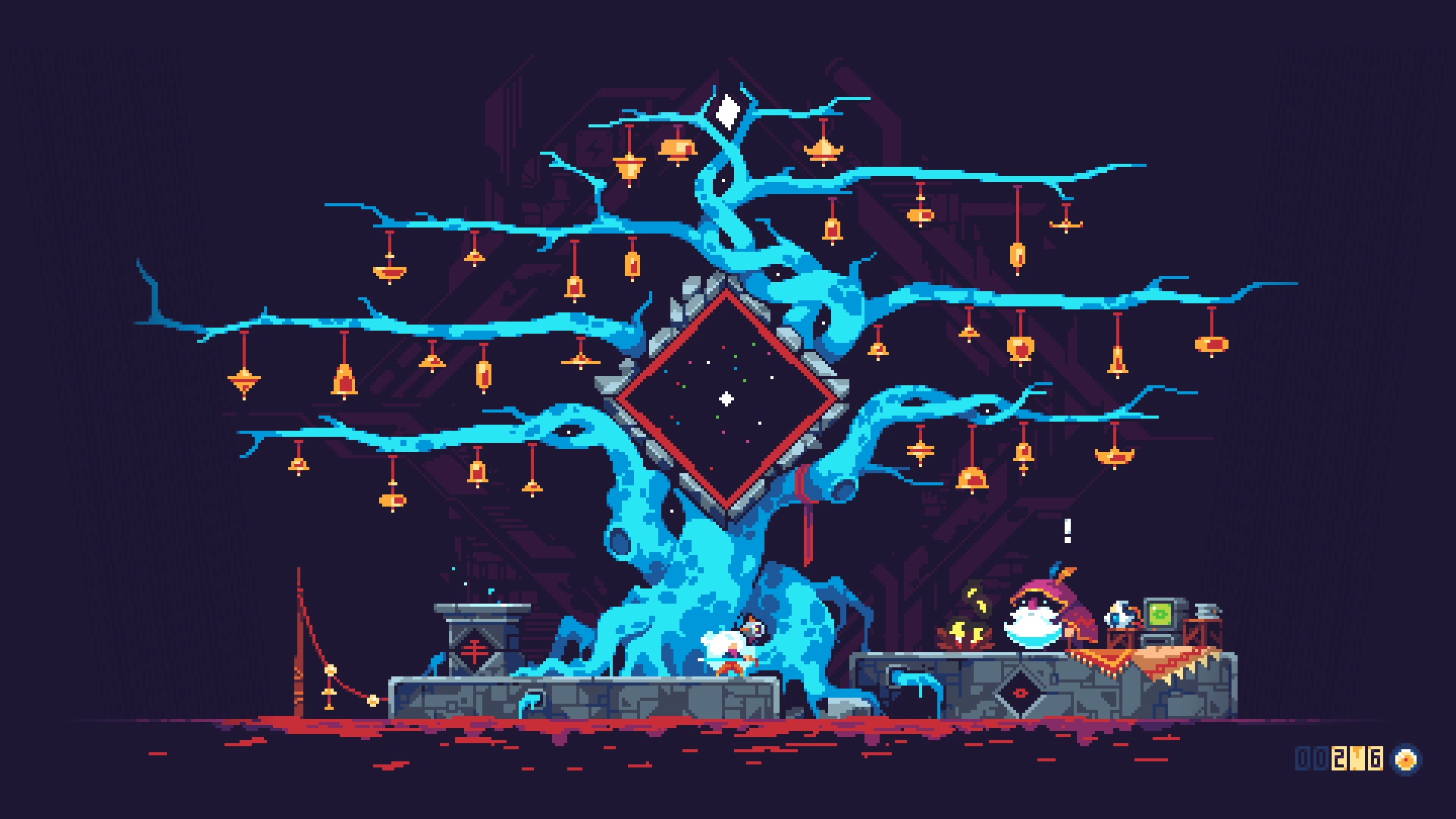 ScourgeBringer is an addictive experience that delivers terrific arcade-style gameplay. The combat is so fluid, fun and fast that you’ll easily get caught up in it for hours, and it puts up an impressive fight when it comes to delivering a tough-as-nails challenge while still being highly enjoyable, with intense battles backed up by stunning visuals and a fantastic soundtrack. It’s a roguelike platformer that can be a tough nut to crack at first, but the reward is worth all the blisters you’ll have on your thumbs.