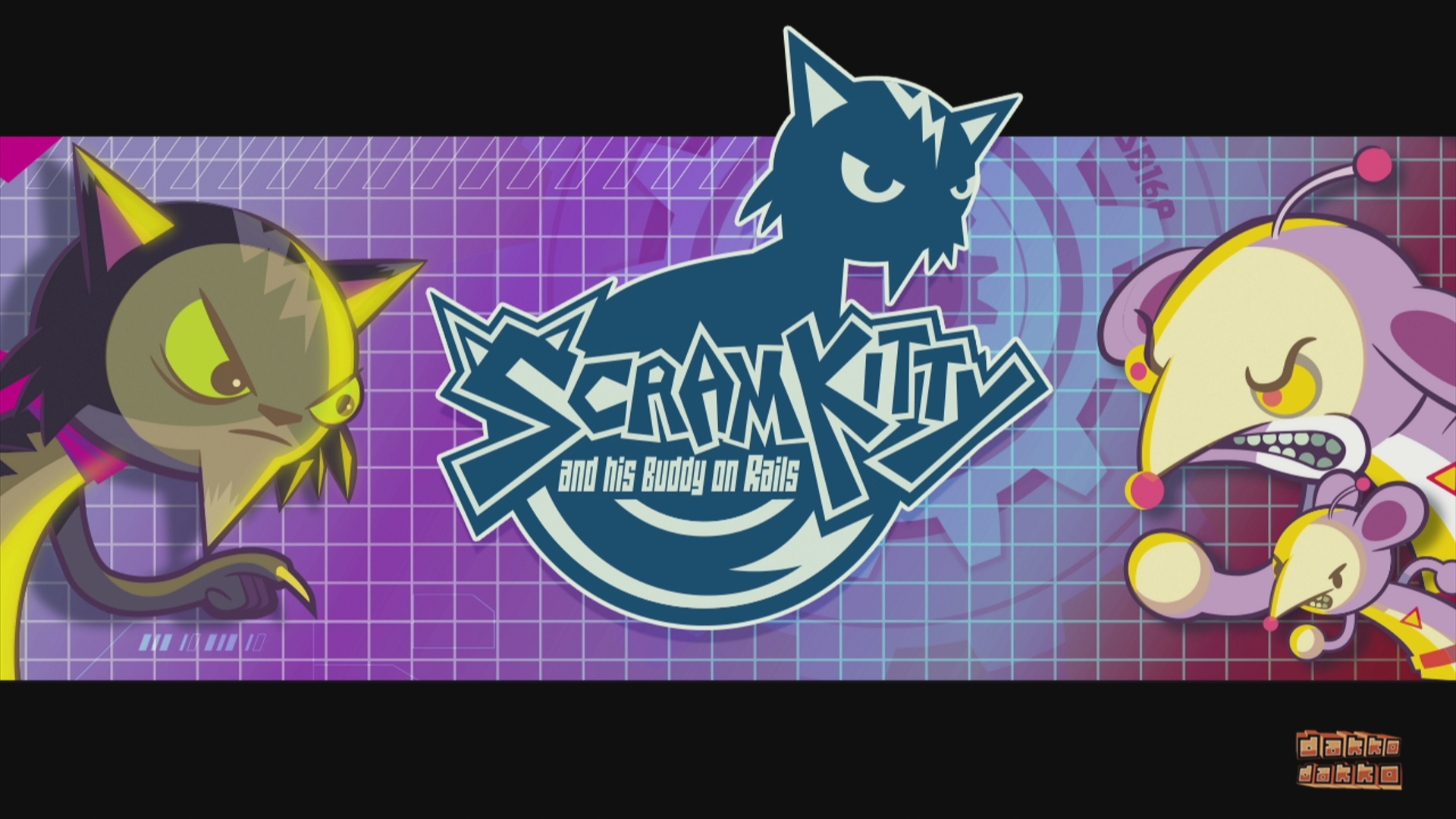 Dakko Dakko made a name for itself on the PlayStation Mini storefront with a pair of well-received games a few years ago. Now, they’re back with Scram Kitty and His Buddy on Rails. It’s got an odd title and one that represents a bizarre premise fairly well. As Buddy, you hop around rail-filled levels in a grinding, platforming, and shooting game with a collect-a-thon thrown in for good measure. The bulk of your time will be spent moving around while shooting enemies and gathering pennies. Getting rid of enemies gives you access to more pennies, and gathering 100 pennies gets you an extra cat depending on the level. Some have up to four cats that will need to be saved in order for your to progress to the next round of stages. Beyond the penny-earned cat, lazy cats are found by all stage exits, while black cats stay hidden until you beat a boss in the stage that will take a ton of damage, and scaredy cats will hop around the stage until you hit all their hiding places. This approach allows you to “beat” a stage quickly with just one cat, but if you want to progress, you can’t half-ass anything. You need to have a rock-solid run that allows you to gather up all of the cats in one go or replay the stage until you do so.

This can lead to some frustration, but it’s worth it. The core game is so polished and fun to play that it’s fairly easy to forgive this issue. Moving around with either the left stick or d-pad is easy, and jumping with B while shooting with Y works perfectly. The symmetry of the Gamepad’s design is genius for old-school games on the Virtual Console, and feels fairly natural for FPS gaming as well. With Scram Kitty, you can move with either the d-pad or left stick, but the left stick is far more preferable. The stages are full of curves and stick movement feels more natural for that.  The d-pad does well quite well though, so if you want to keep a completely symmetrical hand position, you can — it’s just going to make the game a bit harder. That’s one thing the game doesn’t need any help with as the default design is challenging. 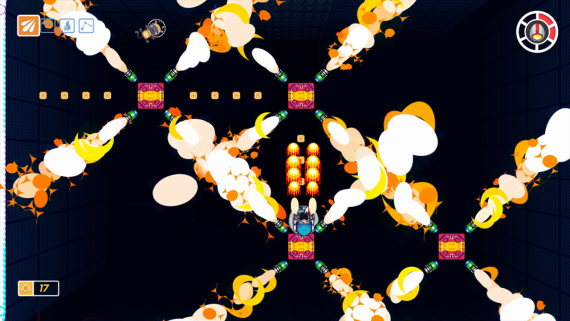 Traps are all over the place in the form of spikes and frequent enemy respawns will leave you shooting bullets blindly to at least have a chance at victory. One of the game’s best mechanics is the double jump fireball/spin dash thing. You double tap the jump and turn into a fireball capable of taking out boss mice in a stage fairly quickly — but with a technique that can send you careening over the abyss if you’re not careful. There’s a risk/reward for your weaponry as the basic gun will keep you safe from smaller enemies, but it is nearly useless against tougher  ones. You might thing with two sticks on the Gamepad that you could control the path of gunfire, but you can’t. Everything shoots forward, so instead of moving a stick to aim, you need to hop around the level to position yourself at a better angle. This can mean putting yourself in harm’s way a lot, and you’ll be relying on the fireball jump to save your skin a lot.

There’s definitely a learning curve to everything in Scram Kitty, as the jump physics take some getting used to and the entire game is designed to challenge you. It’s not meant to frustrate though, and every problem you encounter can be overcome with persistence. If you’re having trouble getting all of the cats in one go, then you can try to get one per play session — that way the main goal still gets done, and you’re able to do it at your own pace. One issue that is rather annoying is having to play the entire game on the Gamepad. The TV screen is just used as a zoomed-in gameplay viewer, complete with cat updates via a scanline-filled news broadcast that offers up some basic gameplay hints and tips. It’s a very odd move as the nature of the precise platforming means it would be a bit easier to see on a bigger screen and yet you’re kind of stuck using the lower-res Gamepad screen for everything. 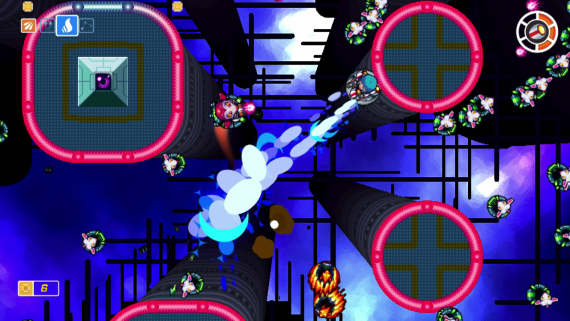 Visually, Scram Kitty is quite striking. The 16-bit sprite art style works for the concept and there’s a lot of color depth here. It’s a bit like an early 32-bit 2D game with how much color is in the backgrounds, while everything maintains a strong 16-bit influence. It’s a pleasing combination that evokes the past while still looking fairly modern since many games are going for the 8-to-16 bit art style. The bright color scheme keeps things lively, while the fast action never slows down for a second. Granted, since this game is simply replicating a 16-bit art style and not actually running on 16-bit hardware, that’s to be expected, but still worth noting given how much slowdown plagued fast-paced games like this back in the day. The audio isn’t nearly as memorable as either the gameplay or graphics though. The soundtrack is full of fairly generic-sounding chiptune rock music, and there’s nothing contained within it that sticks with you after playing. The sound effects are excellent though, with little chimes letting you know when pennies have been collected and some truly forceful effects used for gunfire.

At $10, Scram Kitty and His Buddy on Rails is a solid buy if you love retro gaming and have an affinity for slightly strange game concepts. This shooter/platformer/collect-a-thon is a lot of fun, even if its mechanics take some time to get used to. Its Gamepad-only gameplay is a unique approach that won’t be for everyone, but does allow folks who just want to watch a game in a room to enjoy it and give the person playing it some tips thanks to the live broadcast-style presentation. The sprite art is excellent, and the lack of slowdown makes for a more enjoyable experience than some retro shooters. The audio presentation peaks with the strong sound effects for gunfire, but falters with a forgettable soundtrack. The main game is quite memorable though thanks to the concept being so different, and it’s worth checking out for most retro-loving fans — it’s just not something that’s likely to appeal to many beyond that fanbase.