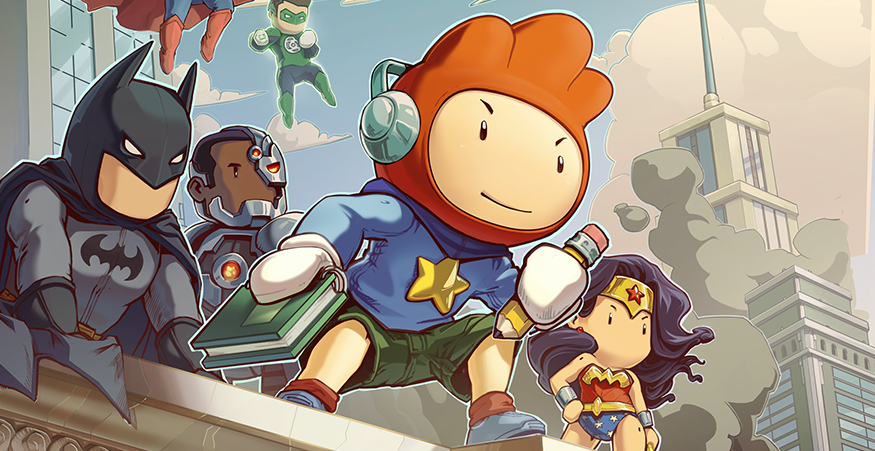 Scribblenauts Unmasked has a problem: it’s subtle enough that its entire duration could be spent waiting for the game to start, only to realize it just blew past you. While Scribblenauts has never been the deepest series, one would think that a crossover with a universe as enormous as DC’s would spur a revolution in gameplay. Scribblenauts Unmasked, however, isn’t a platformer, a puzzle game or even an action one, and it’s not a game that reveals more of itself as the characters evolve. In fact, it’s not really a game at all. It’s a interactive notebook where you write things that instantly appear in the world. While that statement epitomizes the appeal of the series, it also reveals Unmasked’s biggest problem: Batmobiles are only fun if there’s somewhere to drive them.

Scribblenauts Unmasked yet again stars series protagonist Maxwell. Like any other boy, he sometimes gets in trouble, but his heart is always in the right place. One of his biggest passions in life (besides making things come to life) is comic books. He loves their fantastic tales and spends many a night hunkered down in bed reading the newest adventures of Aquaman or more realistically Batman. His sister Lily loved them just as much, and the two frequently argued about which hero was best. Maxwell decided the only way to end the argument would be to find out in person, so he draws them into DC’s universe. Maxwell soon finds out, however, that arch-nemesis Doppelganger is already there and is assisting all the DC villains wreck havoc on the universe’s citizens and stealing all of its Starites. Maxwell and Lily must now team up with various DC heroes to stop Doppelganger’s evil plan. 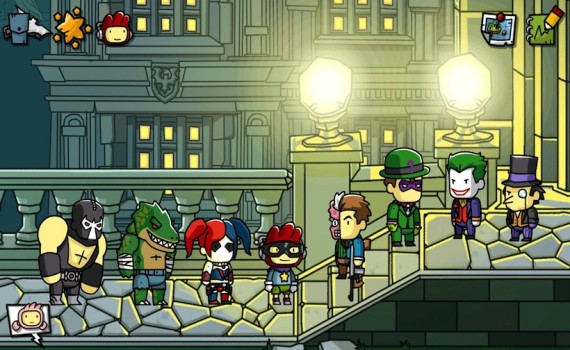 The world of Unmasked is split up into multiple DC universes, including Gotham City, Metropolis, Oa, Atlantis and more. Each is unlocked by gaining a certain amount of reputation from various heroic feats scattered throughout the worlds. There are hundreds, if not thousands, of these and they are randomly generated, meaning that loading up the same world twice will lead to completely different objectives. Most are quite simple, however, solvable in a matter of seconds. Examples include a character that is on fire who can be put out by clicking them and typing “wet” or feeding a hungry citizen by creating a piece of food and dragging it onto them. Some of the feats can be a bit more robust, like traveling back in time and saving a building from being destroyed, but overall they tend to be simplistic. This quickly makes affairs become boring as they don’t take a lot of brainpower and makes it so the majority of the game consists of typing words. Less but more complex puzzles that required multiple objects to be created and points to go to, as in previous Scribblenauts titles, would have been preferable.

Every level also features a Starite to gather, done by assisting a hero defeat Doppelganger and the enemy in their respective world. While this seems like a fun prospect, they play too loose and generally boil down to creating a weapon and bashing the bosses hoping you don’t die. Because it takes a small amount of time every time an object is typed, it gets exhausting having to type something as boring as a “knife” just to have a chance in battle. Dipping into the DC character base for assistance is more rewarding, but it’s so large that it’s not realistic to use. 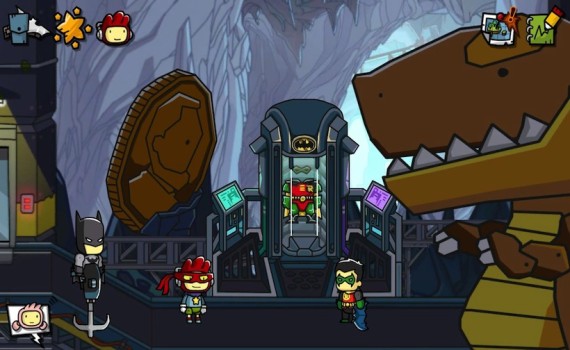 There are reportedly two thousand existing DC characters available in the game, a number too large to actually confirm, but it seems like an accurate count. Not only are there the standard characters like Batman, Superman and Wonder Woman, but variants of each of the heroes. There’s at least fifteen different Batmans, even including the fan-favorite one from Batman Beyond. Besides known characters, there’s tons of incredibly obscure ones, all adorably drawn in the Scribblenauts art style. Any of these heroes or villains can be summoned at any time to assist you in your journey, which can making choosing a posse quite entertaining. There’s also a bevy of items available, ranging from Kryptonite to Batarangs. The sheer number of DC universe assets stuffed in is staggering and sure to delight the most hardcore comic fans.

In addition to the thousands of available characters, there’s also a rather robust Hero Creator that allows players to create practically any imaginable hero. A pre-existing DC character can be started with and modified to a hilarious extent or a character can be created from scratch, complete with their own super powers. This is a lot of fun and a great time waster, but once you create a character there’s not a whole lot to do with it. Still, creating a ridiculous crossover of Bane and Lex Luthor is worth more than a few chuckles. There’s also origin stories that can be unlocked with reputation. These are an interesting diversion, highlighting their rise from child to superhero, but are over far too quickly. 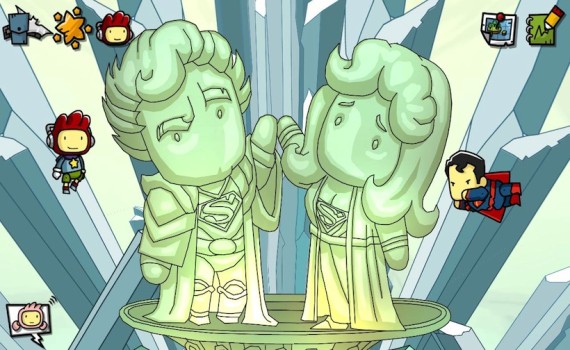 Scribblenauts Unmasked feels less like a video game and more like a chore. That’s a phrase too often thrown around in video game reviews, but it’s about as apt as a comparison one could draw. With just a handful of environments, a main storyline no longer than ten hours and repetitive encounters, there’s not much of a game here. Most of its duration will be spent typing words, which although enjoyable in prior Scribblenauts games, here boils down to repeatedly typing weapon names. While there’s tons of puzzles included, they lack enough substance and challenge to hold your interest for long. Thankfully, however, quite a bit of time was put into adapting the DC universe into the game and being able to create or interact with literally thousands of its characters is enjoyable. As such, children and devoted fans of DC properties should have a good time, but there’s simply not much here for anybody else.