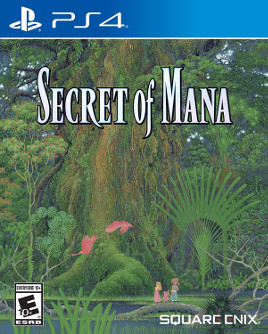 Secret of Mana is regarded as one of the best RPGs of the 16-bit era. When it was originally released in 1993 it was insanely popular in Japan and sold well in the United States considering RPGs were still a much smaller market at the time. Secret of Mana is a unique game among RPGs of the time. Its unique battle system was implemented on top of a game with an engrossing story that wasn’t afraid to venture into weird territory, such as the famous Santa’s workshop quest or the large cannons that serve as a quick means of party transport. Despite its strong cult following, for a beloved Squaresoft game it hasn’t received that many remakes or re-releases, with the original Super Nintendo version released on Wii Virtual console and included in the SNES Classic and a mobile port for iOS and Android. That has changed now that Secret of Mana got a complete 3D overhaul and is available for a new generation of gamers on PC and Sony consoles.

Secret of Mana begins with male protagonist Randi and two friends exploring one of the areas they aren’t supposed to go, which is typical of young men in JRPGs. During this excursion Randi gets separated from his companions and ends up pulling some ancient rusted weapon out of the ground that happens to be the legendary Mana Sword. Randi uses this to hack his way back to the village which results in getting him banished due to this sword being blamed for monster attacks, never mind the fact Randi uses this weapon to save the town from a monster attack. Later on Randi adds two new travel companions, a girl named Primm and a Sprite named Popoi, who I renamed Propper to make sure his travel companions were Primm and Propper. During the dialogue exchanges that happen throughout the normal story progression or staying at the Inn, it quickly becomes apparent that these folks are traveling together to assist one another with their various goals and not because they actually like each other. 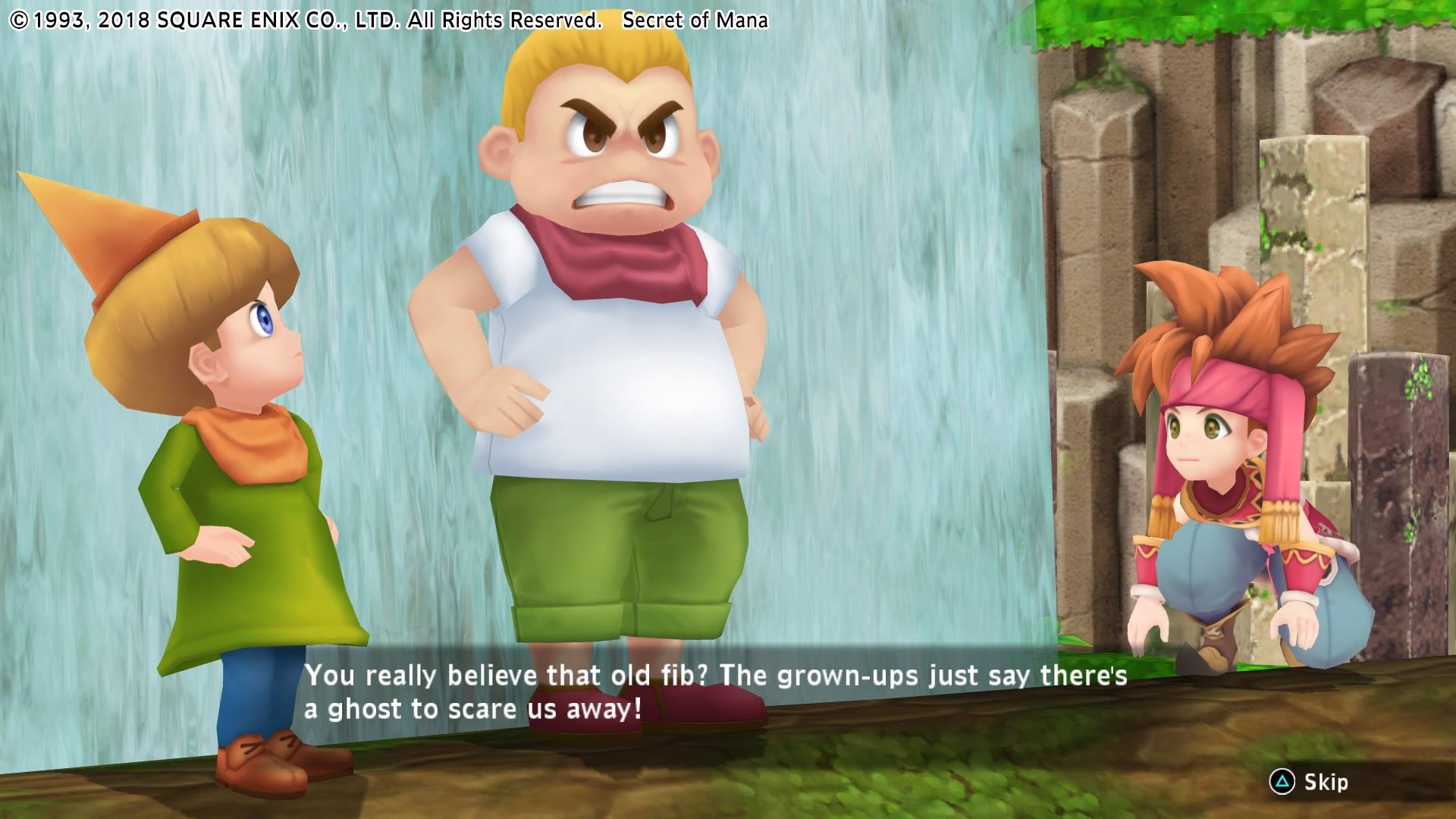 Each of these characters have different strengths and weaknesses and behave differently. Randi is a typical fighter class; he’s the strongest and quickly gains weapon proficiency but is unable to use magic. Primm’s physical attack power doesn’t lag that far behind Randi’s and she’s able to use her magic to heal her companions or provide support buffs, like allowing physical attacks to turn enemies into snowmen or statues. Popoi is a weak little sprite, but she makes up for her physical weakness by unleashing powerful destructive magic. Switching between each character can be done on the fly with the D-pad and calling up the command wheel to change equipment or execute specific commander for any character can be done quite easily.

Secret of Mana has one of the more unique battle systems for RPGs of its time. Its combat system was an effective blend of party management like Final Fantasy titles but tried to be more action based like The Legend of Zelda, which in retrospect feels like a prototype from the party management system in Final Fantasy XII or Bioware’s Dragon Age series. All battles are fought in real time with the player controlling one character and AI controlling the other two, though the AI leaves a lot to be desired as the AI controlled party members tend to die frequently in situations where the player-controlled character remains largely unscathed. Time does stop when the command wheel is active, so players don’t need to rush through in selecting what spell they need to cast or item to use. This is an area where the remake seems to introduce problems instead of solving them. In the original, attacks were limited to an eight direction targeting system and it was clear who was going to be hit with one. The 3D version allows for attacks in any direction with the hit detection not always being clear whether or not the attack will land where it’s supposed to. Enemies are also still invincible after being attacked, but some of the humorous animation that accompanied this in the original was cut. 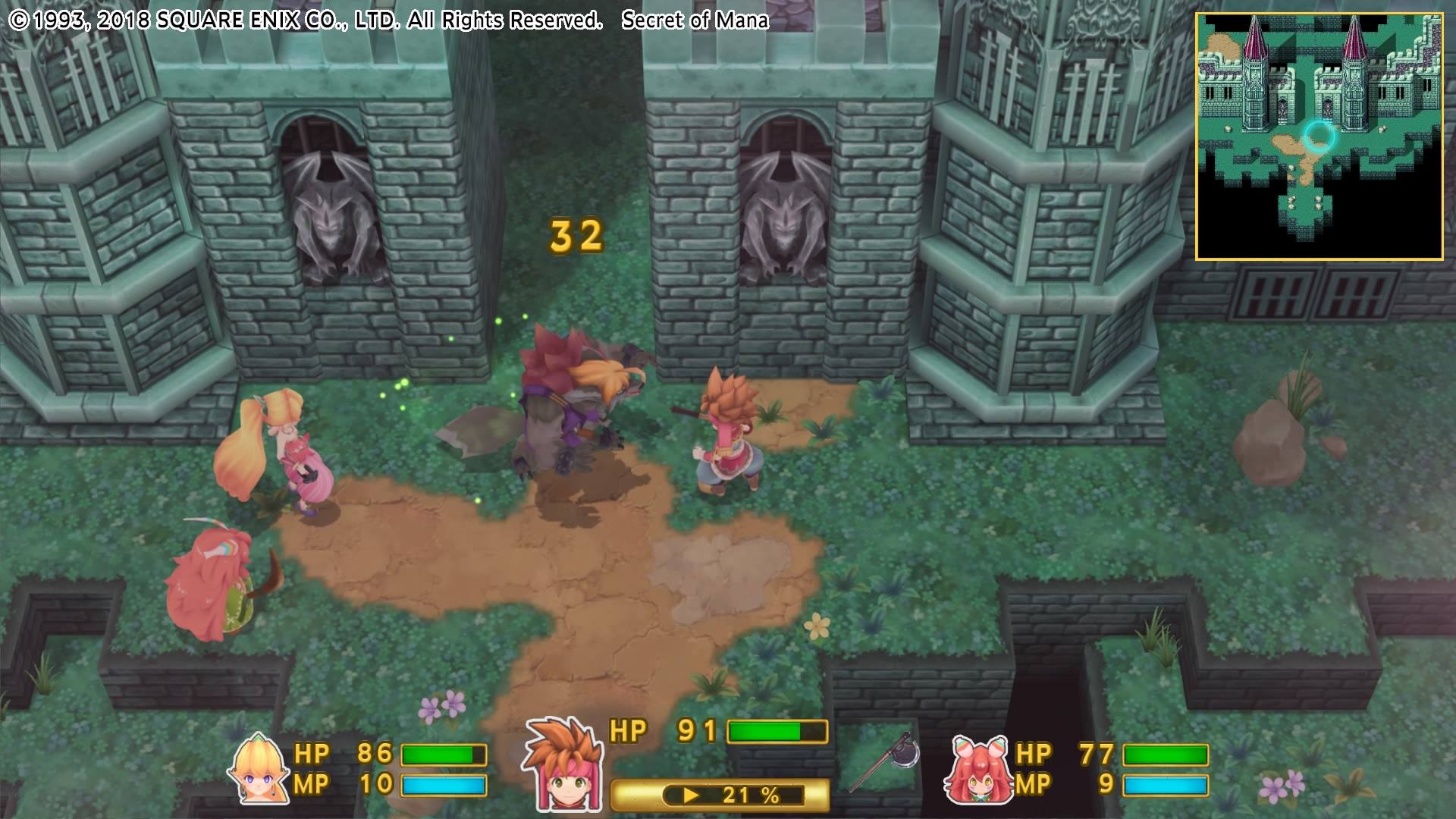 This remake of Secret of Mana is something of a double-edged sword. Beyond anything else that can be said about this remake, the core gameplay and story is the same game that everyone remembers. Playing through the story again on the PlayStation 4 was enjoyable, just as it was back on the SNES. The story, pacing and overall combat system remain intact which is why Secret of Mana was able to attain status of one of the best 16-bit RPGs in the first place. An inherent problem with trying to update something that was truly special to begin with is some of what made it so can get lost in translation and that’s an issue here.

Before polygons took over the world, games like Secret of Mana originally had character sprites, and because hardware restrictions had to make expressive animations with limited frames and details, this resulted in expressive and memorable characters in the hands of talented pixel artists. The 3D incarnations of the Secret of Mana characters are faithful recreations of the 2D sprites, but some of their original charm is lost in this transformation. Adding voice overs to games that never had them usually doesn’t feel quite right, and while the English voice cast isn’t the worst voice, it isn’t exactly good. Where these two issues make each other worse is in the animated cutscenes where voice acting usually occurs over animated characters with no mouth animation, and on the rare occasion there is mouth movement, it’s extremely limited and out of sync with the audio. The end result looks like a less charming 3D version of Secret of Mana with the limited animation still in place, which was forgivable with 16-bit sprites, but less so in 3D. 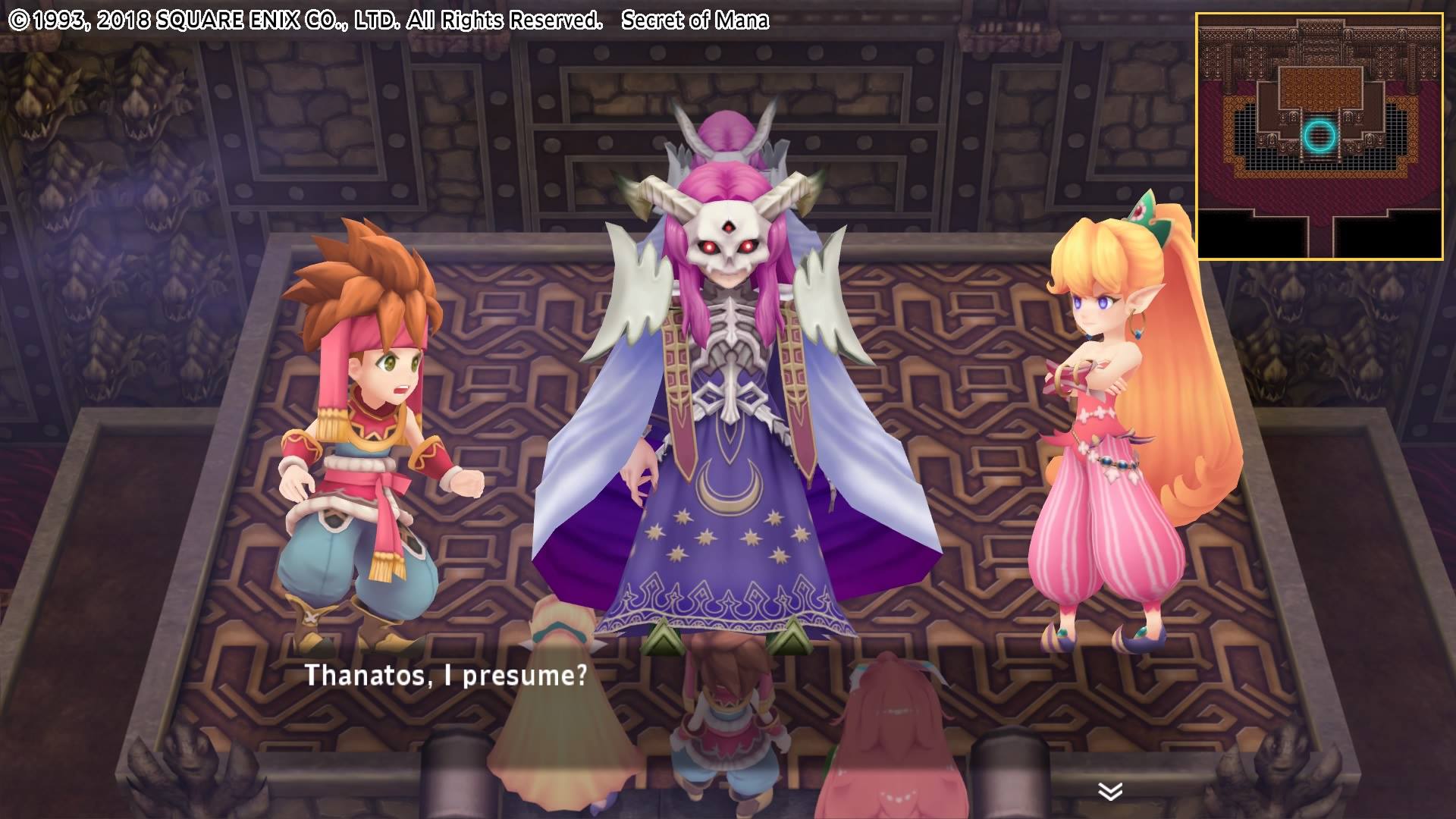 Secret of Mana can be played with multiple people or single player. Multiplayer is recommended for the simple fact that the AI for the two characters not controlled by the player is stupid and they’ll die a lot in scenarios where the player-controlled character can easily sidestep the majority of attacks. The boneheaded tendencies of the party members are not limited to combat, since on several occasions when trying to reach the next destination, I found myself traveling alone as the two companions were several screens back running in place next to a rock. This kind of behavior was a bit more forgivable in 1993, but nowadays with advances in NPC AI, no one should have to settle for dealing with the Gump squad. This behavior extends to NPCs of Secret of Mana in general. Remember how in a lot of old RPGs you could be held hostage somewhere until the random movement pattern of an NPC moves them out of blocking a doorway? That happens occasionally in this title. Also certain quality of life improvements that have come to RPGs over the past several years such as armor shops showing the stat changes of their purchasable wears hasn’t been added, so this remake changes some things that didn’t need to be changed and fails to update minor things such as telling the player what items for sale actually do. Some gameplay updates that make sense include being able to assign certain commands, such as spells, to hotkeys and adding a much-needed autosave feature. Additional dialogue and cutscenes expand the story a little, but while they’re not intrusive, they don’t add a great deal to the experience.

Secret of Mana is an odd remake in that it changes things that were fine but doesn’t update it in other areas that would make it feel more contemporary. The music received an overhaul as well, with the new mixes trying to sound more like they were recorded with real instruments and less like video game music, though there’s an option to play the 16-bit original mix which oddly enough seems to fit with the game better. The 3D art does take away some of the original version’s charm, but certain elements that were special remain such as the dancing merchant. While this isn’t new to remake, it’s fun to see how Secret of Mana is connected to other Square games. Moogles make an appearance, which we would later see in Final Fantasy VI when it was called Final Fantasy III on the SNES, though we saw Moogles several years later when Final Fantasy V came out, which predated Secret of Mana. The dwarves have the same basic design as they did in Final Fantasy IV. The overall art style of the 16-bit Secret of Mana was similar to Chrono Trigger, and Crono and Marle’s appearance looks like he was patterned after Randi and Primm. These were aspects of the game that helped make it feel special in the SNES days. All those games took place in their own world and had their own unique identities, but little details like that helped create a sense of connectivity between them. 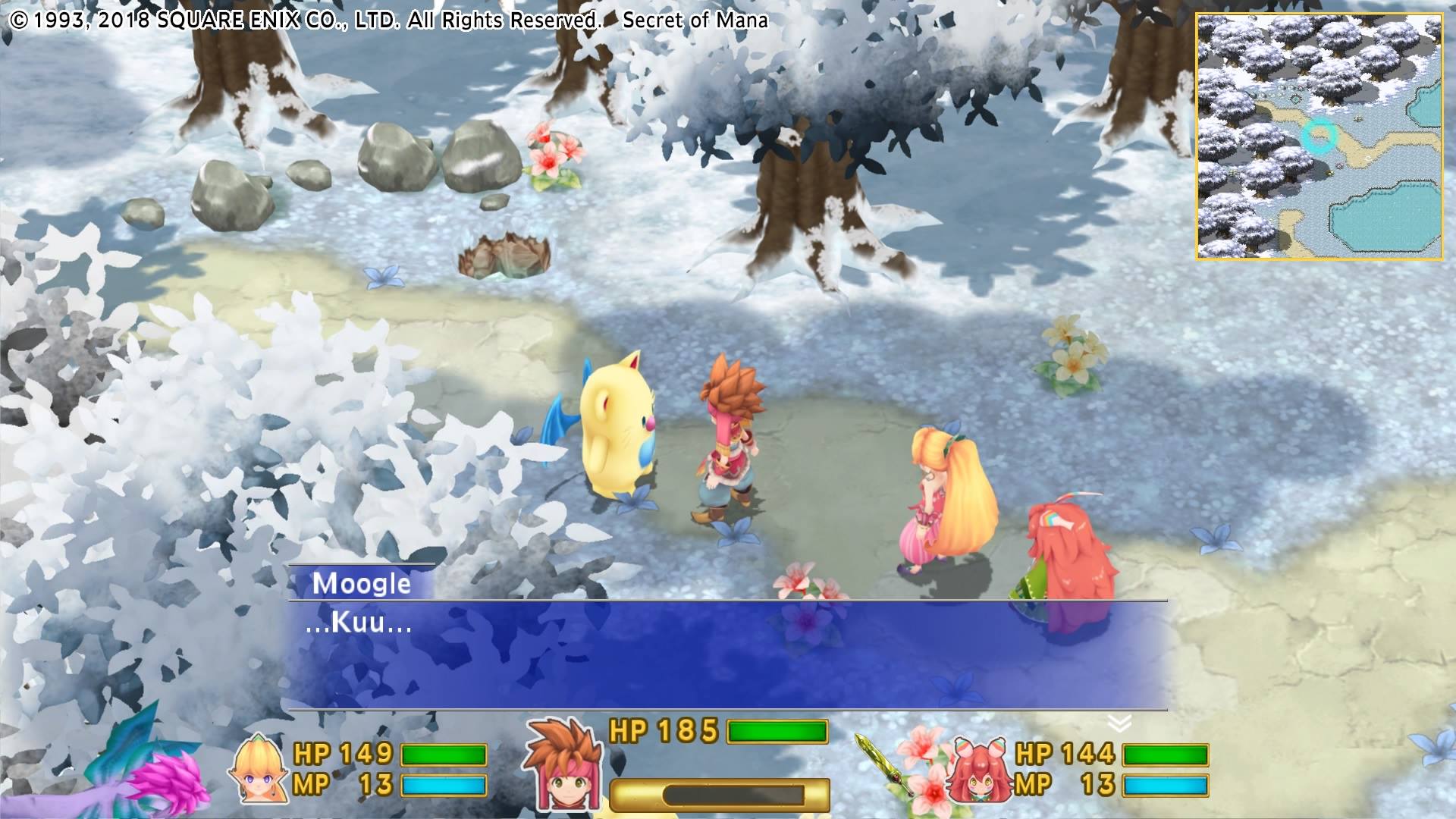 Secret of Mana is a strange title. On one hand it has so many missteps in its redesign that it’s easy to quickly dismiss it, but it remains a rewarding gaming experience upon playing. A lot of changes take away from the original’s charm while several aspects that could have benefited from an update were left alone. Honestly what would have been ideal is if it was left in the original state and given a 2D sprite makeover in the style of Final Fantasy IV for the PSP and maybe added some minor updates like shops containing item descriptions, but even with the complaints that can be made about this remake, it’s still Secret of Mana. Almost every JRPG fan will enjoy this remake, though a better Secret of Mana experience can be found on Super Nintendo.