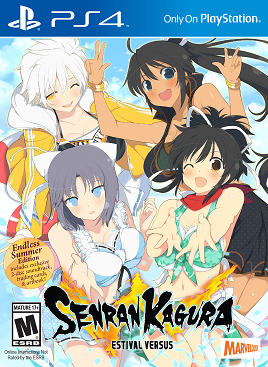 The Senran Kagura series is famous for one thing: each female character has back breaking, physics defying bajoomlas that can only exist in a fantasy world are the calling cards of these titles. Developer Tamsoft and publishers Marvelous and XSEED make no bones about where to place the marketing emphasis. They ensure that those interested will find it squishy and directly in our faces. The great news is that the titillation aspect is only to get the player in the door. There is actually more to Senran Kagura: Estival Versus than mammareets the eye. (Oh, I hope the editor lets that last one jiggle through. And that one)

For those unaware, the Senran Kagura series centers around three separate schools of modern shinobi as they travel and learn the ins and outs of becoming high ranking, powerful ninja. Each class is filled exclusively with nubile, female students who probably had no issues learning front flips, but had a very difficult time with the back ones. The games themselves take place among various smaller stages that task the player with beating the ever loving tar out of swarms of enemies before finally taking on one (or more) bosses. The action in these games are frenetic and extremely fast. Using various combos and intuitive controls, the players can take on these swarms, do high damage air juggles, and unleash devastating special attacks.

The character’s state of dress also affects the gameplay. Starting off in regular garb, the player and bosses have a normal, balanced set of attacks, dodges and parries. Should the desire or need arise, a “Shinobi Transformation” can be used. After a brief, revealing cutscene, the player is now stronger and has access to an expanded moveset. However, the player can also decide to go with frantic mode, which strips the character down to her undies, lowering defense, but increasing attack and allowing an unlimited combo string. Anyone who played the previous title, Shinovi Versus, will be familiar with these concepts. 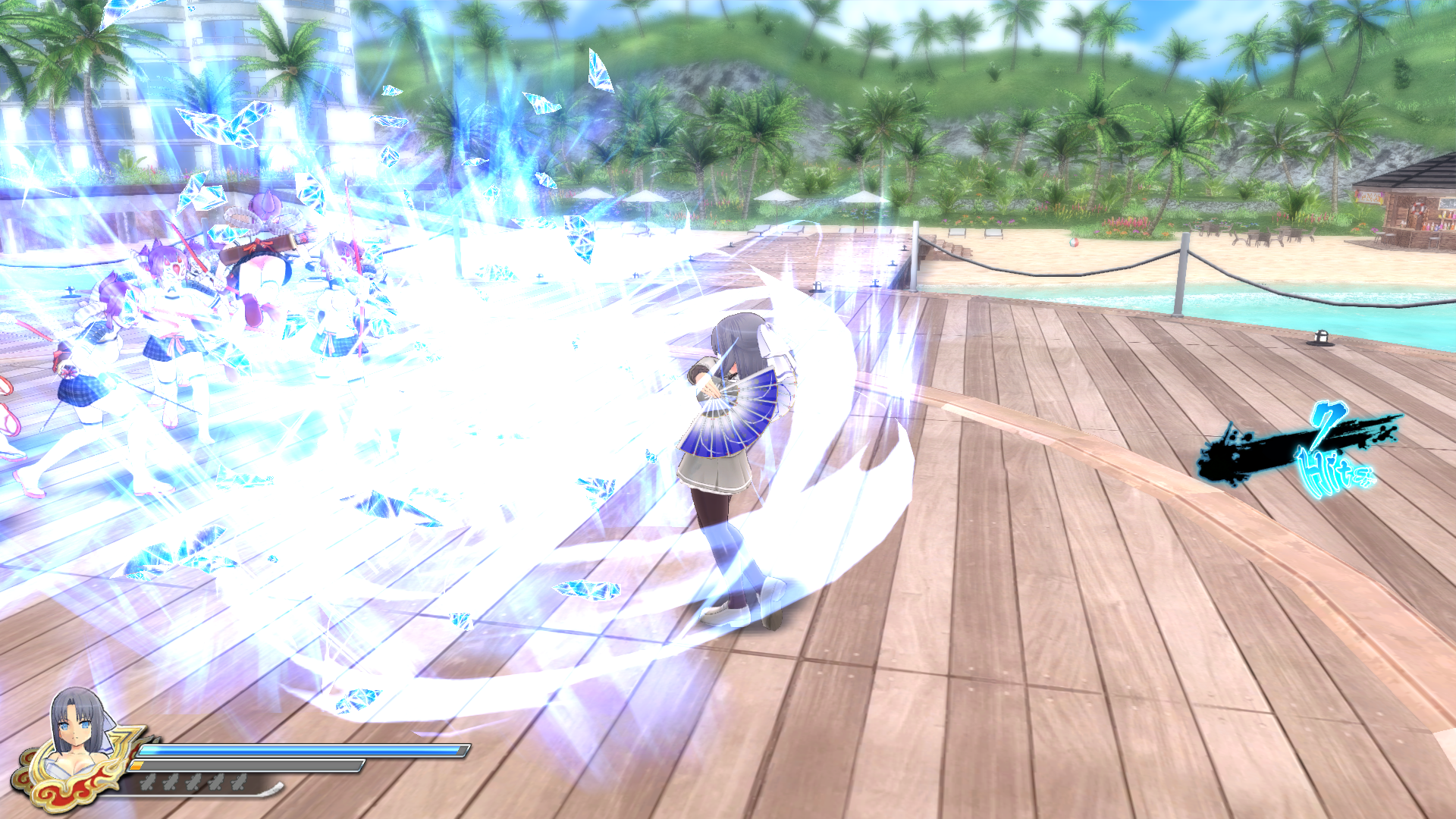 The latest installment, Estival Versus, finds the three schools brought to a tropical island to participate in the “Shinobi Bon Dance,” whose purpose is to help dead shinobi find peace in the after life. This dance actually takes the form of a competition, where each team must destroy the other teams’ shrines while protecting their own. For those worried, that last is just a story conceit. Defense is not really part of the game, and the action is still all about decimating the opposition.

While the previous series entry took place across three separate stories, this one is focused on a much longer tale. Players will jump from character to character as the story goes on. Strangely, this works better. While being able to focus on the point of view of one faction was certainly nice before, having a longer tale to enjoy created a story with more moving parts that came across in a more coherent fashion. They certainly didn’t skimp on the humor. While there are still some attempts at drama, this game is about being as silly as possible. Moments like the undie eating contest left this reviewer laughing out loud. There are still the character focused “Shinobi Heart” stories for those who want a break from the main proceedings. 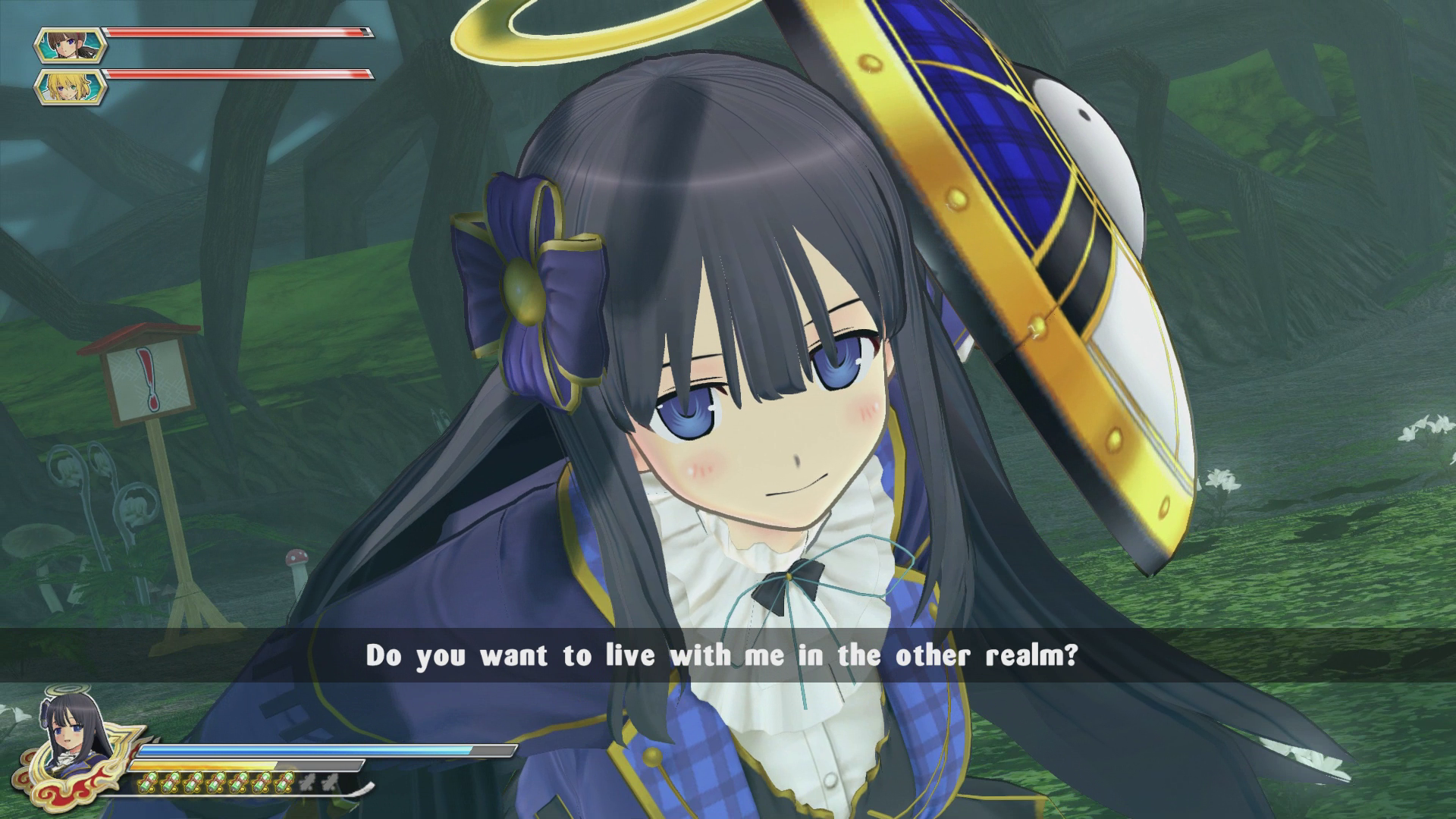 The battle system has also seen some tweaks and improvements. The players can now run up walls, perform recovery attacks, and utilize area specific special finishers. These last are almost invariably hilarious. One, for example, knocks the enemy, sans cloths, into a pot. The pot breaks, and an octopus pops out, landing on the poor girl. The resulting pose is intentionally reminiscent of The Dream of the Fisherman’s Wife. Lord, now that I type that out, I feel extremely creepy. Really, though. It’s funny!

That does lead to a sticky point of this title: the sexualization of the characters. There was even some concern about me taking this review as I have made comments about sexism in past posts. While I am not equipped to speak for feminism in general, I feel that there is a difference here. Viewed from a certain lens, it could be argued that these women are being objectified. However, during the course of actually playing the title, it becomes obvious that these ladies are written to be strong. Each of them kick ass in their own certain way. With this strength comes a certain self awareness to the proceedings. Everything is done with a wink and a smile. No one is really talked down to or mistreated (unless they want to be…) There have been games that I have been embarrassed to play with the wife in the room. This is not one of them. Put another way, were they to switch the characters out for men, I would not feel insulted. It should also be noted that, with the exception of some posteriors, there is no real nudity in this title. 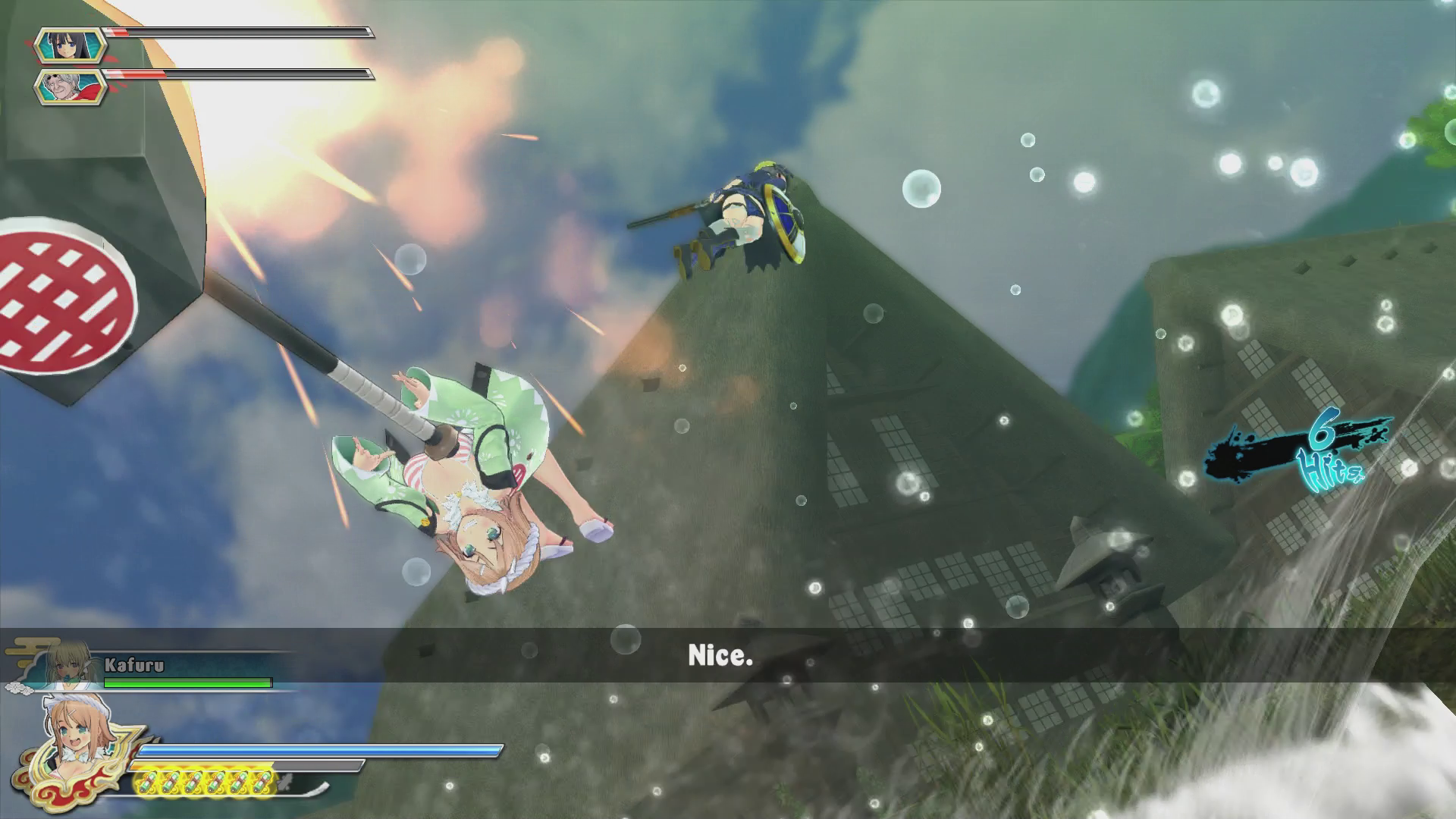 With everything fun and exciting about this game, it becomes extra frustrating when the obnoxious flaws rear their heads. One of the worst culprits is the camera. This thing can have a mind of its own. With how fast the action can get, the occasional ocular freak out is understandable. Even so, whether making copious use of the game’s lock on feature or manually adjusting with the right stick, it will put a major hamper on the fun.

Another annoyance is the unskippable transformation animations. Whenever anyone, friend or foe, triggers one of these animations, the player is forced to watch it. This was not so in the previous title and one wonders why this ability didn’t make its way to a Playstation 4 sequel. It breaks the flow of combos way too many times to be considered acceptable. 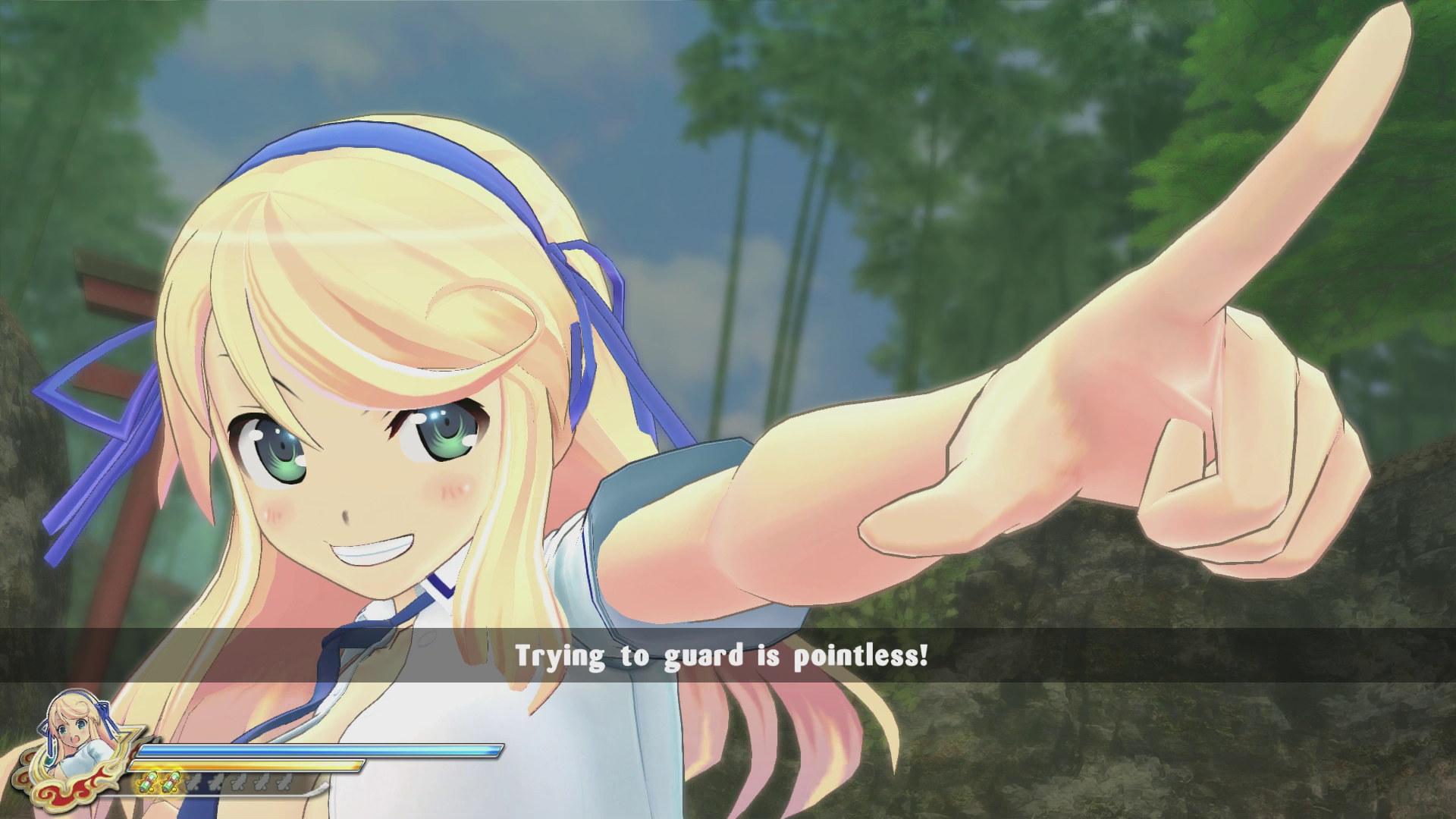 Finally, while I praised the character writing, it needs to be stated that they are not all exactly deep. While some, like Miyabi and Ikaruga do have an arc to them, others come off as one note jokes. With such a large cast, it isn’t reasonable to expect everyone to be deep or relatable, but having characters with only one characteristic (“I want to touch all the boobs!”) can become obnoxious.

For those deciding between the Playstation 4 and Vita version, I would recommend the home sku. The PS4 boasts 60 frames per second while the Vita is locked at 30. Load times are drastically reduced on the big brother, too. Also, enemies can pop in on the Vita version, whereas the increased power of the PS4 allows so so many more folks to beat down at once. Finally, there is less of a likelihood to have to engage in an awkward conversation with a stranger if it is just played at home. Either option is still a recipe for a good time, and the cartoon graphics do look good on both, so no one is missing out horribly should they only have a Vita. 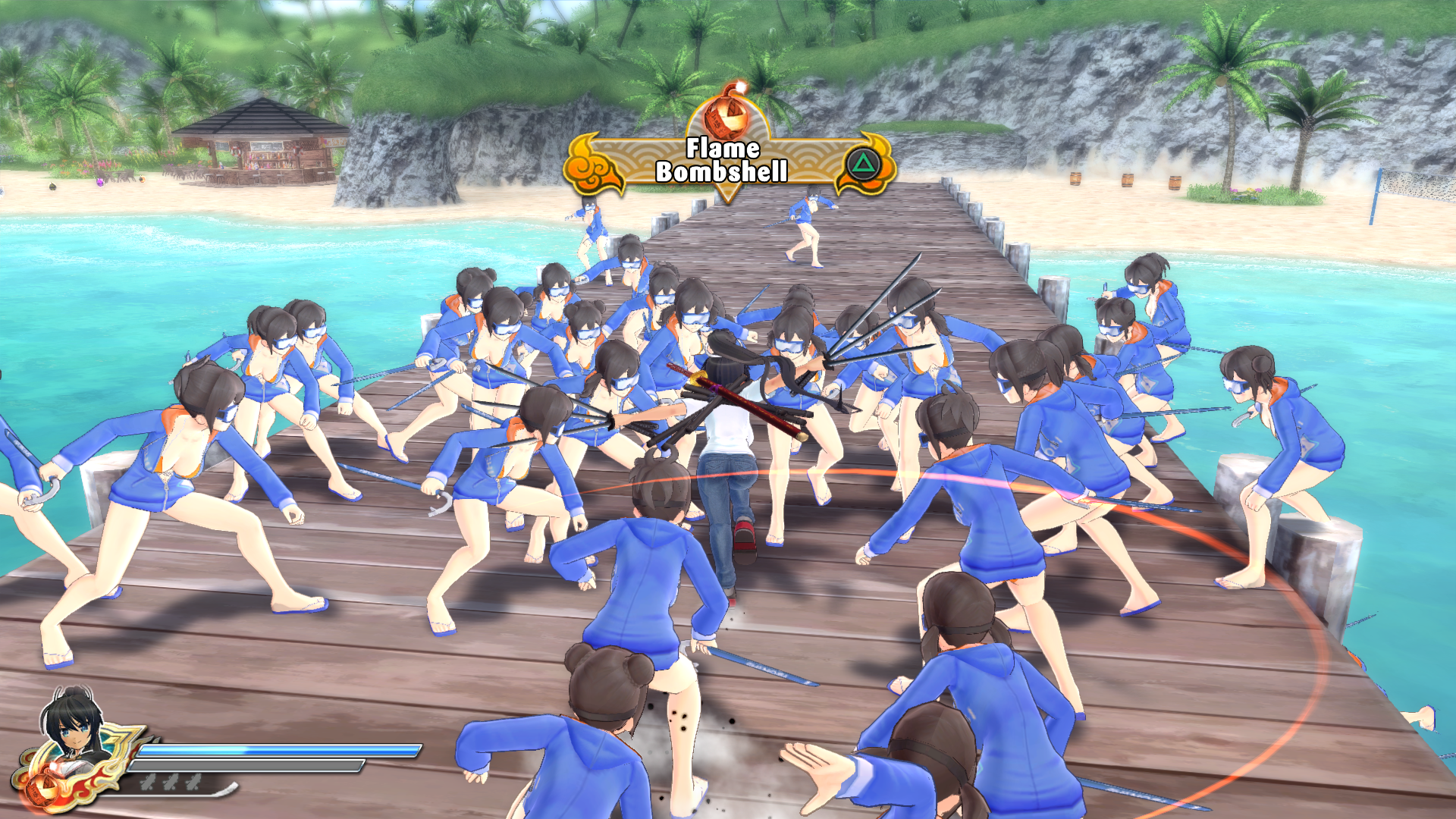 For as many flaws as this game has, it should also be reported that I spent my entire time playing this title with a big, stupid grin on my face. It’s aggressively silly, like a pie fired out of a cannon directly into the face. Fun and frantic, it’s a game worth revisiting for quite a while. Therein lies the issue with recommendation: I adore this thing, bumps and all. When forced to step back and examine it as a whole, a more sober perspective must be taken. Those who are able to look past the myriad issues will find themselves feeling like they are injecting dumb fun directly into their veins. It just won’t leave any track marks.