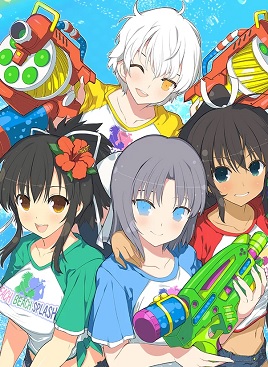 Marvelous’ Senran Kagura series started off as a lackluster beat ’em up line that traded on its cheesecake fan service to move copies. It wasn’t particularly inspired or well designed. Time moved on and the series did something really interesting: it got good. Starting with Shinovi Versus, the levels became more satisfying to complete and the writing embraced the silliness of the entire concept, becoming self aware like Skynet with a big red clown nose. The battles of the various ninja schools evolved into a story framed in humor and silky smooth swordplay. Sure, taken out of context, it seems like the entire series is a sleaze fest that debases the player and women. Actually playing the game, however, shows that the girls are in on the joke. I realize that I have said this before, but it bears repeating for the uninitiated. It’s important to be able to set aside any preconceived concerns to truly get what the series is really about: dumb fun where everyone, from the characters to the player, is empowered. With this out of the way, it’s time to dive into the latest entry in the series, Senran Kagura Peach Beach Splash.

The story takes place after the events of Estival Versus, with each of the four schools enjoying an unseasonably warm winter. The revelry doesn’t last long, as they are pulled down a mysterious rainbow slide to a deserted island and forced to take part in Peach Beach Splash. This competition, shortened to PBS during the narrative (they so missed a chance for a “Brought to you by the National Endowments of the Breasts” type joke) asks the ladies to battle it out in an arena-based tournament using water guns while the goings on are streamed on a YouTube-like service. Though hesitant, the prize of any wish being fulfilled convinces the groups to go for it with gusto, though not without some internal and external conflicts arising. Existing fans of the series will suspect that there is a deeper reason for the competition. They would not be wrong. The plot itself is the proper amount of silly, with a few legitimately clever lines that forced an unexpected laugh. There is also a feeling of having seen many of these same story beats before in the series, though, with some jokes almost copy/pasted from previous entries. I was willing to overlook this, but there might be some fans that will feel some disappointment. Fortunately, the boss fights do feel rewarding when they pop up, though the Gropety Grope Machine and the Lickety Lick Machine are almost identical in how they are handle.

Unlike the previous beat ’em ups, this is strictly a shooter. Players are dropped into an arena with a character and a preselected set of skills and told to get to work. Sometimes, the arena is filled with swarms of popcorn enemies that go down after a hit or two, sometimes it’s a match against characters from another school controlled by bots, and occasionally the player will need to put out fires by shooting them. It can start to feel repetitive as time goes on, as it feels like a game designed for multiplayer that had single player modes shoehorned in. That’s especially unfortunate as the mechanics are top notch. There are plenty of different weapons to use, from gatling guns to grenade launchers, that changes up team roles drastically. Each lady is also equipped with a jet pack to fly through the air or zip along the ground at a rapid pace, keeping the battles extremely fast paced and exciting when playing against a difficult team. Mixing in pets and interesting skill cards gives Peach Beach Splash an amount of depth that’s hobbled by lackluster game design. 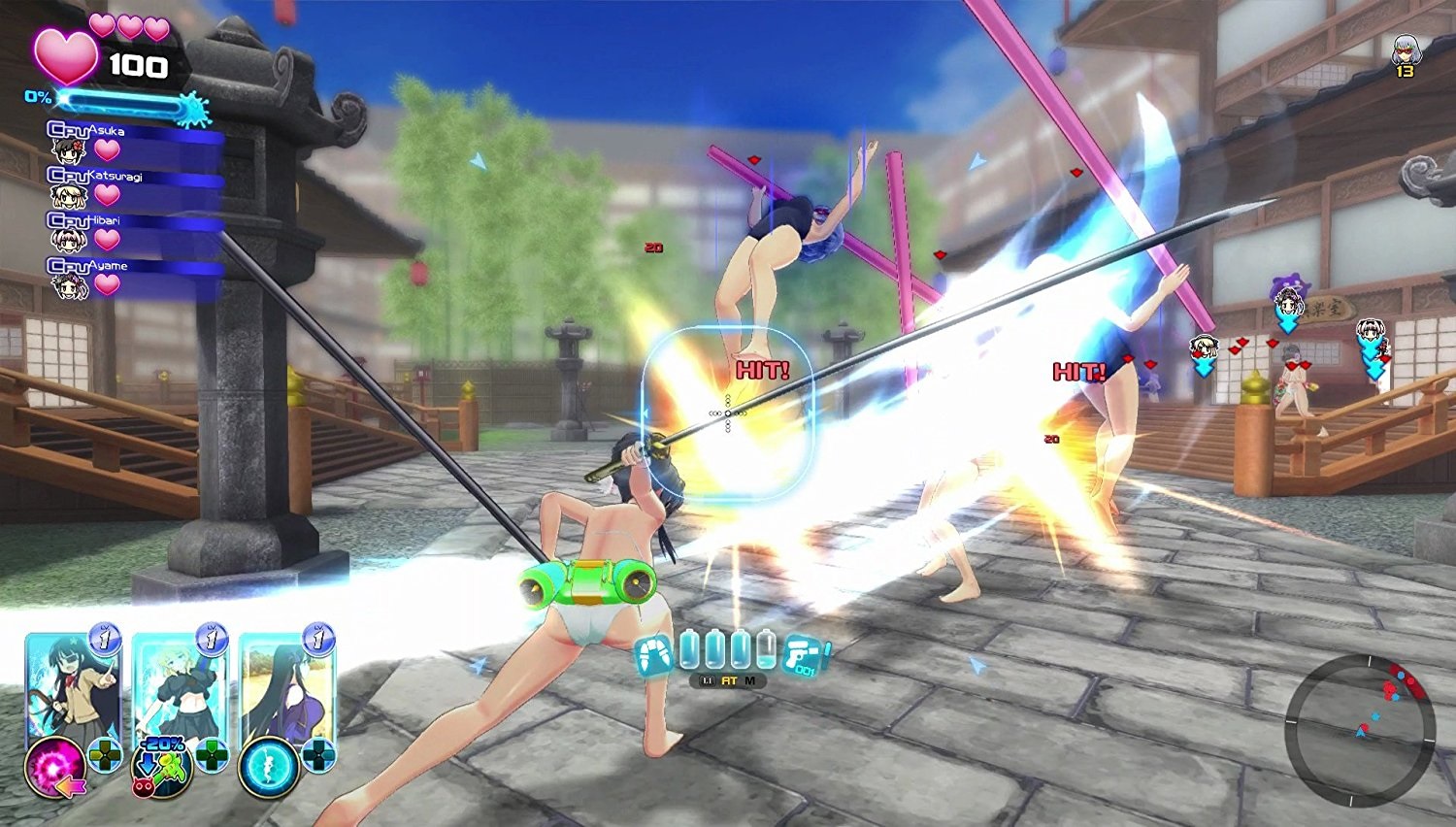 As far as single player content goes, there is a ton of it. The story takes place over four arcs, one for each school, at ten missions a piece. Completing these unlocks a fourteen mission final arc that wraps up the mysteries quite well. In addition to this, there are plenty of Paradise side stories that will eat up the time, and a rather challenging tournament “V-Road” mode that yields plenty of awards, such as unique card packs and high amounts of currency to spend on outfits and art in the store. Polishing off the main story will probably take an average player about four and a half hours, but that is just scratching the surface.

The aforementioned cards are a rather interesting choice for handling skills and leveling. Completing a mission or challenge rewards the player a card pack with ten cards. The cards themselves come in five levels of rarity to get the collector juices flowing, and can be leveled up by feeding them duplicate items. The value of experience points depends on the rarity of the card. Since every skill, pet, weapon and character can be leveled up, there’s an abundance of improvement that can be done. No card pack feels wasted as there is always a use for its contents. Since the cards flow like wine, and more packs can be purchased in the game store with money earned, there are always more of these things begging for attention. Since the progress carries across all modes, spending time with Paradise missions will yield the resources needed to conquer a particularly challenging V-road tournament. The system is very well put together, with an impeccable balance across the single player modes. 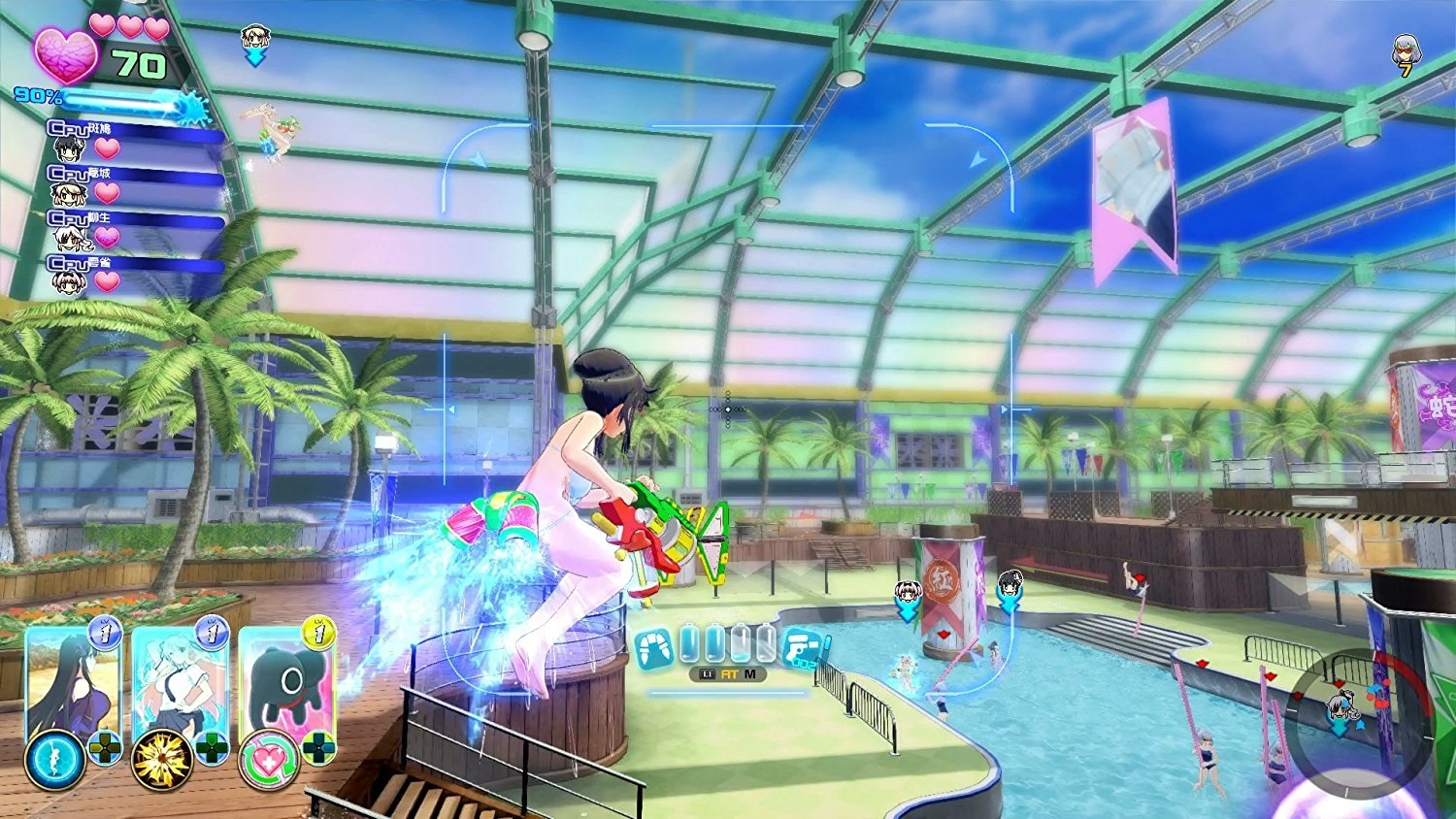 What makes this a true Senran Kagura title comes in the form of the Squirmy Finishes. After downing a “named” character, they are left helpless until they respawn. Teammates can revive the player. More often though, an opposing player will enact the finisher, were they squirt water from a squeaky duck, targeting the face, chest, or pelvic region. Aiming below the shoulders will blast the top or bottom off, revealing that each of the female characters have small but powerful suns where their various naughty bits should be. Doing this cuts down on skill recharge time, so there is a purpose beyond questioning the reproductive process for the women’s species.

All of this feeds directly into the multiplayer mode. Whereas previous editions of the series have been a largely single player experience, despite the fact that multiplayer was included, the arena battles in Peach Beach Splash are absolutely designed to be played against live enemies. It works quite well, at that. The three primary modes for ranked and unranked are pretty much what is going to be expected. There’s a team deathmatch like mode, where the most kills in a five minute time frame wins. Another one is similar to Call of Duty’s Kill Confirmed, where points are only awarded for enacting a Squirmy Finishes on a downed foe. Finally, the Capture the Bra mode is basically Capture the Flag with two flags. There’s also a Horde Mode style cooperative mode called survival that requires the team to defend three points from vast swaths of popcorn creeps. It can be played solo, but was balanced for a team. Unfortunately, I was unable to find a team to check this mode out during testing. 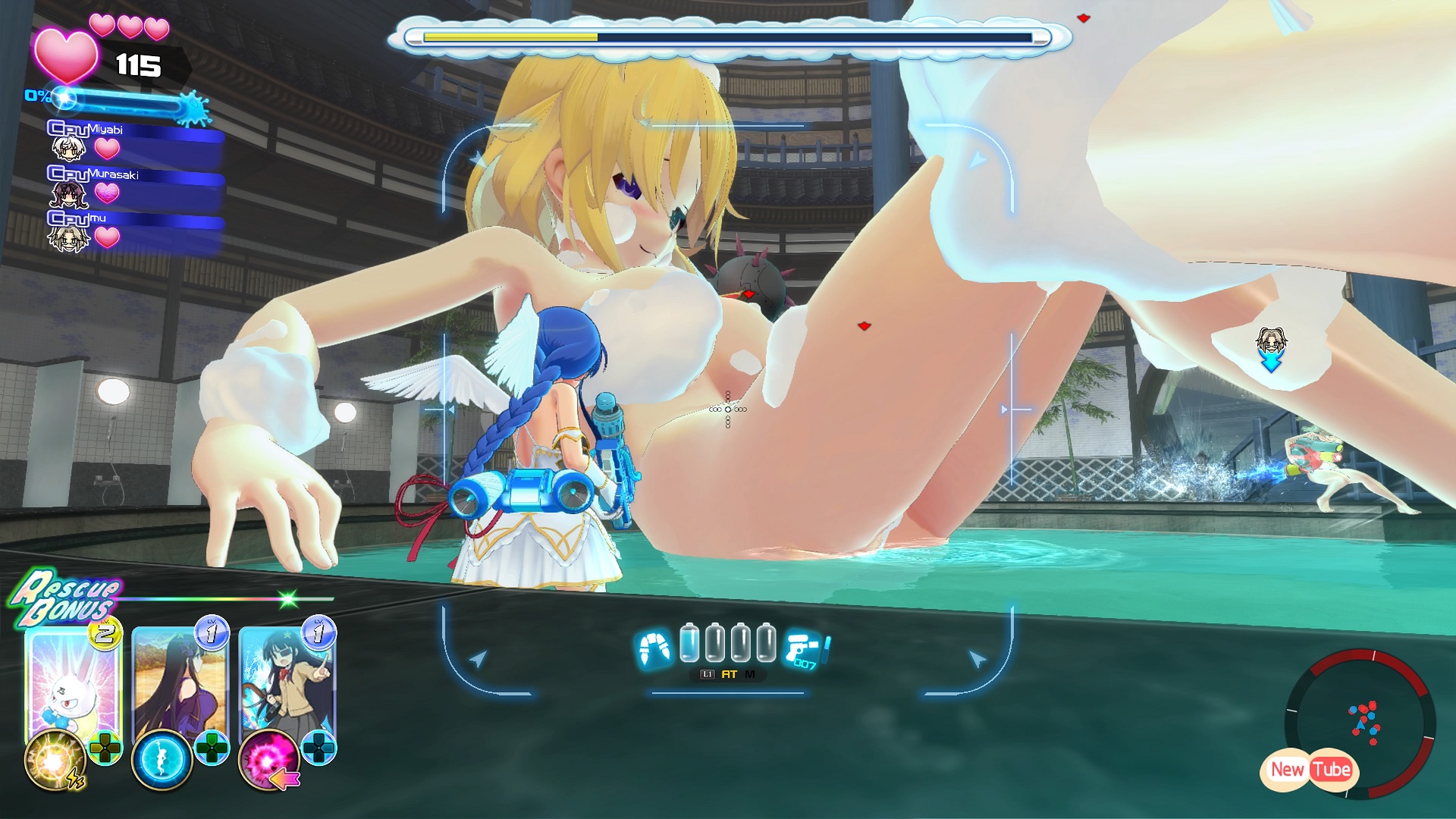 It is while playing online that the maps really show a great level of design. Filled with open arenas for speedy breakaways as well as plenty of ledges and passages to set up sneak attacks, the Peach Beach Splash maps feed into the fast paced, powerful abilities that the characters have. Initially, it might feel like a dumbed down Tribes with chesticles, but this game has a unique feel of its own. The light hearted feel theme marries to the design to create an online shooter that is just so much fun to play. The ranking system tracks wins and losses, and awards points in just the right amount to keep the carrot dangling tantalizingly in front of the player.

This is why it’s unfortunate that, at the time of this writing, it can take upwards of five to ten minutes to get a match going. It’s just not very populated right now. The obvious theory is that most folks are still working their way through the campaign, which is a good idea so that items taken online will be powered up, but it can be a bit of a downer for someone used to popping into a game and starting a match with little effort. Plus, there is a slight disadvantage to not spending time finding and improving cards, though I was able to hold my own when I took to a match with a completely blank heroine and skills. 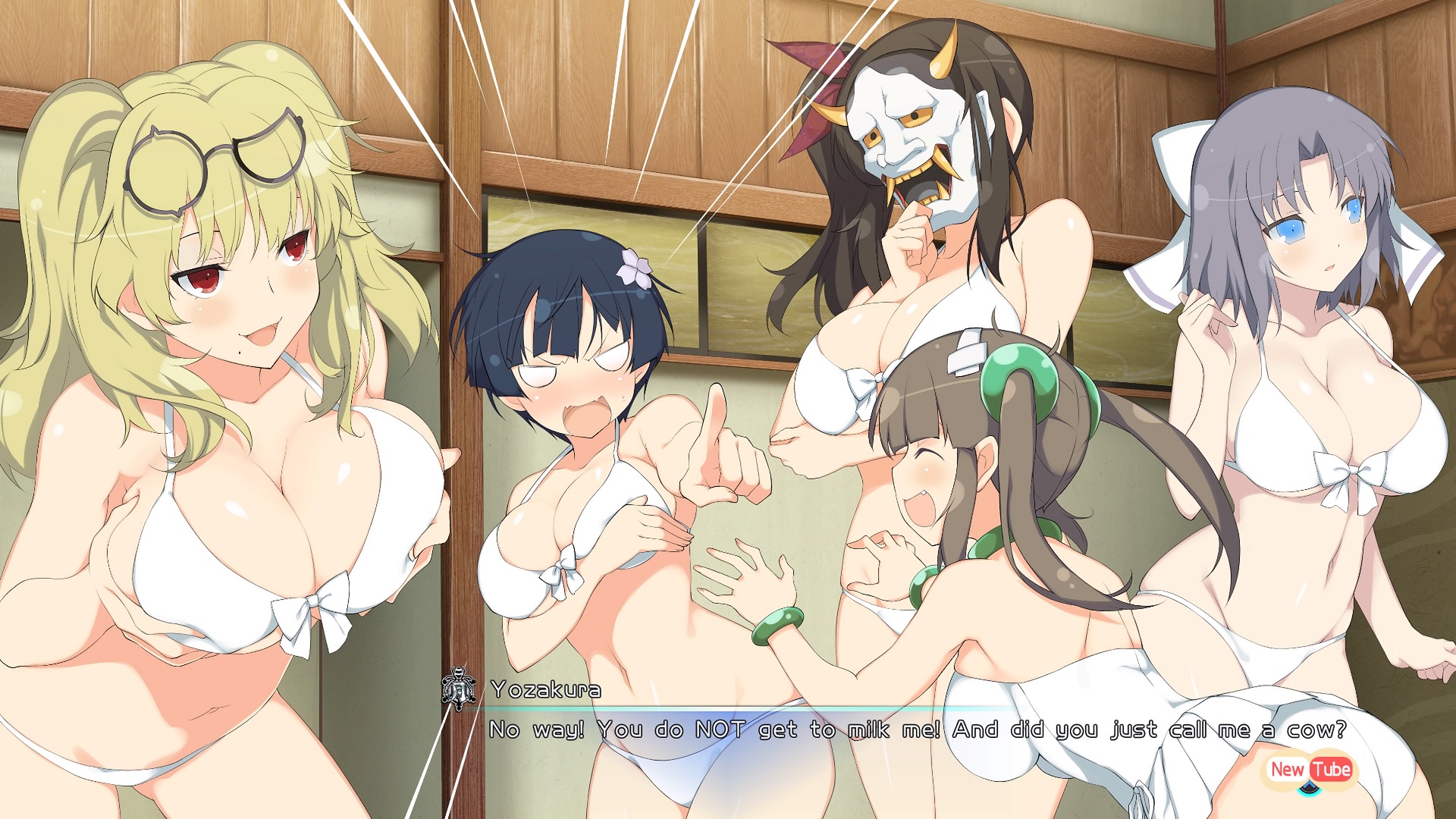 When the single player portion of this piece was posted, someone asked if it’s worth playing if they weren’t planning on going online. For fans of Senran Kagura who just want to spend more time with the ninjas, absolutely. The story has the laughs and the charming tone is still present despite the gameplay departure. Otherwise, newcomers to the series would be better off getting Estival Versus. People who treat the single player stuff as training for the online battles, though, will have the breast time. The pace of the matches are dangerously delicious and prevent even a blowout from feeling discouraging. The constant opportunities for powering up abilities keeps the hands glued to the controller. Senran Kagura Peach Beach Splash is best played online, true, but it’s a superb experience when doing so. Assuming that the player base grows as they polish off the campaign content, this might be just the tonic for gamers that want to set aside spilling blood in favor of spilling clothes.