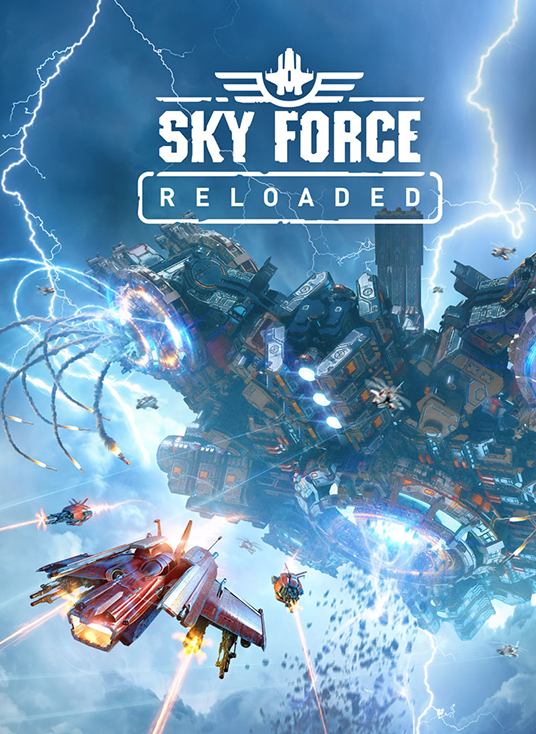 It seemed like the brave pilots of Sky Force would finally get to relax after taking down General Madness in Sky Force Anniversary, but that was pure wishful thinking.  Almost immediately after defeating the final boss of the first game a new threat arises in the form of Scarlett Mantis, and she’s even more troublesome than her predecessor.  After a brief intro level with a fully-powered plane, Scarlett lets loose a screen-clearing laser, destroying your lovely plane and putting you all the way back to the start of the power-up ladder.  It’s a long climb to the top and defeating Scarlett Mantis will require every upgrade you can buy with the stars you grind from the levels.

In the beginning all you’ve got is little more than a popgun firing a single sad and lonely bullet from the nose of the plane.  It’s just barely enough to get a toehold on the first level, taking down the streams of planes that fly harmlessly in formation. You’ll need to line up just right to tag them as they fly in a straight line, and the ones that snake around a bit are bound to have a few survivors escape off the side of the screen.  Enemies drop a star or two and every one collected acts as currency back at home base.  Weak as the ship is at the start, level 1 is a relatively kind place that you can survive with a bit of careful dodging.  Sky Force Reloaded is a precision shooter rather than an overly-frantic one, so while things get crazy deep into the higher levels for the most part you can dodge even the densest bullet patterns with a bit of care.  It’s very easy to get greedy and crash right into something that should have been avoided while working to keep a chain alive, though.

Every level is the same every time, and what this means is they’re meant to be memorized and replayed to perfect a run.  There are four medals to earn per stage, usually given out for 70% and 100% of enemies shot down, 100% of humans rescued, and clearing the level without taking a hit.  While you can get through each level with a bit of care, progress is gated by medals so you can’t just clear a challenge and move on.  This could have been a deeply obnoxious mechanic but instead it forces you to learn each level and perform it right, and if it’s too hard to clear properly there’s always the store back at home base where you can spend your hard-earned stars on more power. 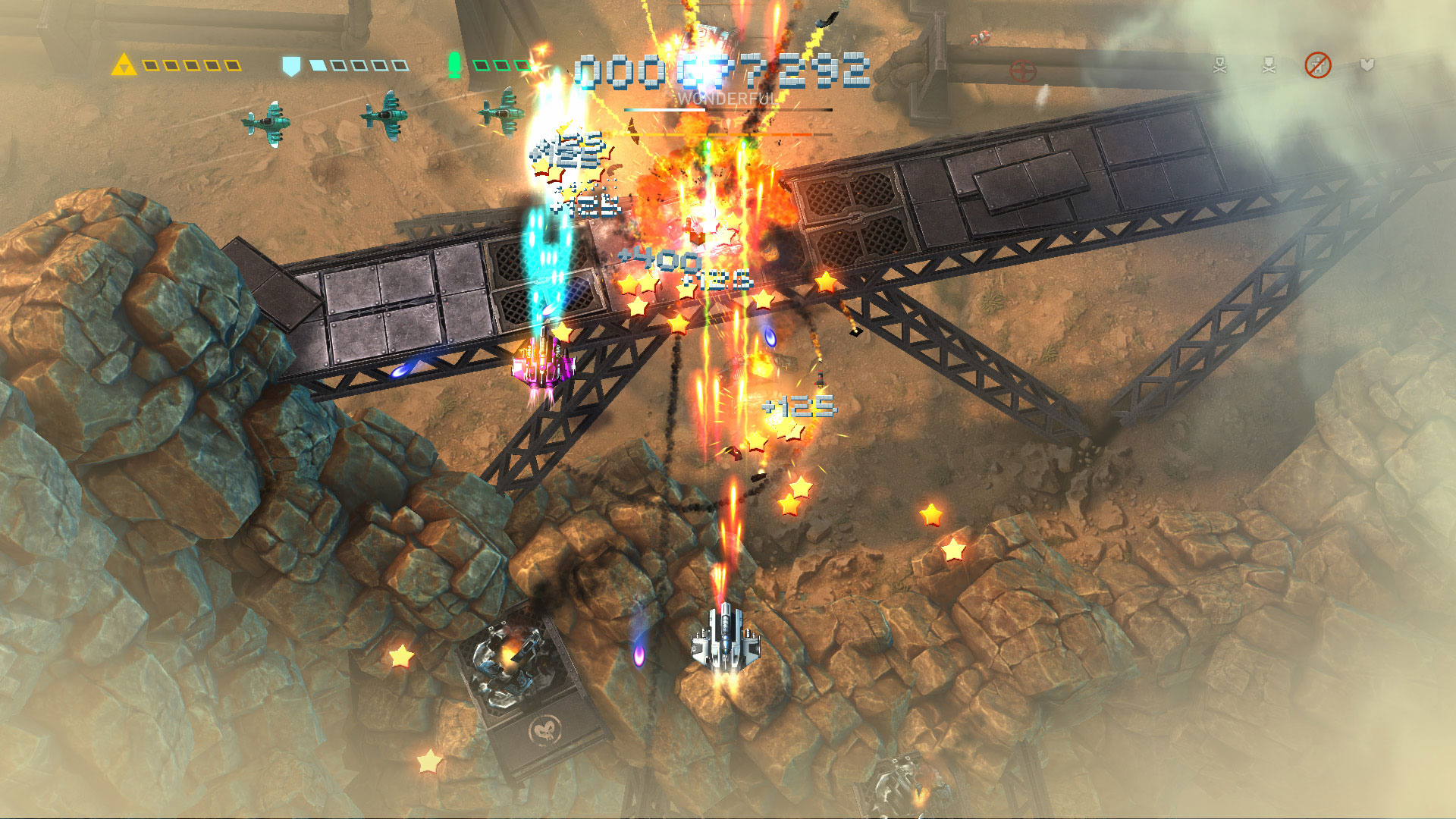 The little starting popgun isn’t going to cut it for anything past level one, and earning the medals to open level two needs an upgrade or two.  After a few purchases the main gun is joined by wing cannons and a missile, you can buy a magnet to attract stars, more health is always useful, and there are two special weapons and a shield for when the stages get extra-crowded.  Each of these options can be upgraded multiple times through different tiers of power, and by the time you near the end of the game the initial single bullet is a fast-paced spread, homing missiles pop off one at a time and do serious damage to anything they hit, stars almost take care of collecting themselves, and yet death is still just one bad judgement call away.

Once you get past the opening areas Sky Force Reloaded starts pulling out the heavy firepower, and by the time it does you’ll have learned to try to kill everything and take silly risks to do it.  Laser barriers cross the screen, missile turrets shoot an insta-death barrage, tanks and helicopters and planes all require a little more pummeling to go down, and the powered-up Sky Force ship all of a sudden is barely adequate for the task.  The only cure, of course, is more stars for more powerups, but everything is now expensive and the better rewards of later levels are locked behind large medal requirements.  Progress is going to require perfecting earlier levels, getting all medals and opening up Hard difficulty to re-earn even more medals plus rake in the greater star rewards they contain.  And then do it all over again on Insane, which even on level one throws up a nice challenge.

While stars are the primary currency, they’re by no means the only pickup to look for.  The super-weapons pop up as drops now and then, and like the main-gun powerups glowing enemies leave behind they’re good only in the level they’re found in.  Rare cards can be found randomly giving rewards both temporary (faster shots, free super-weapon at level start) and permanent (speedier plane, longer pickup radius for stranded humans), and plane parts show up occasionally as well.  Keeping cards and plane parts requires surviving, though, and seeing as you’ll usually be working on a challenging level when you find one there’s no guarantee you can bring it home.  It also doesn’t help that each plane requires five parts before it’s unlocked, so earning a new ship is a fairly major victory. 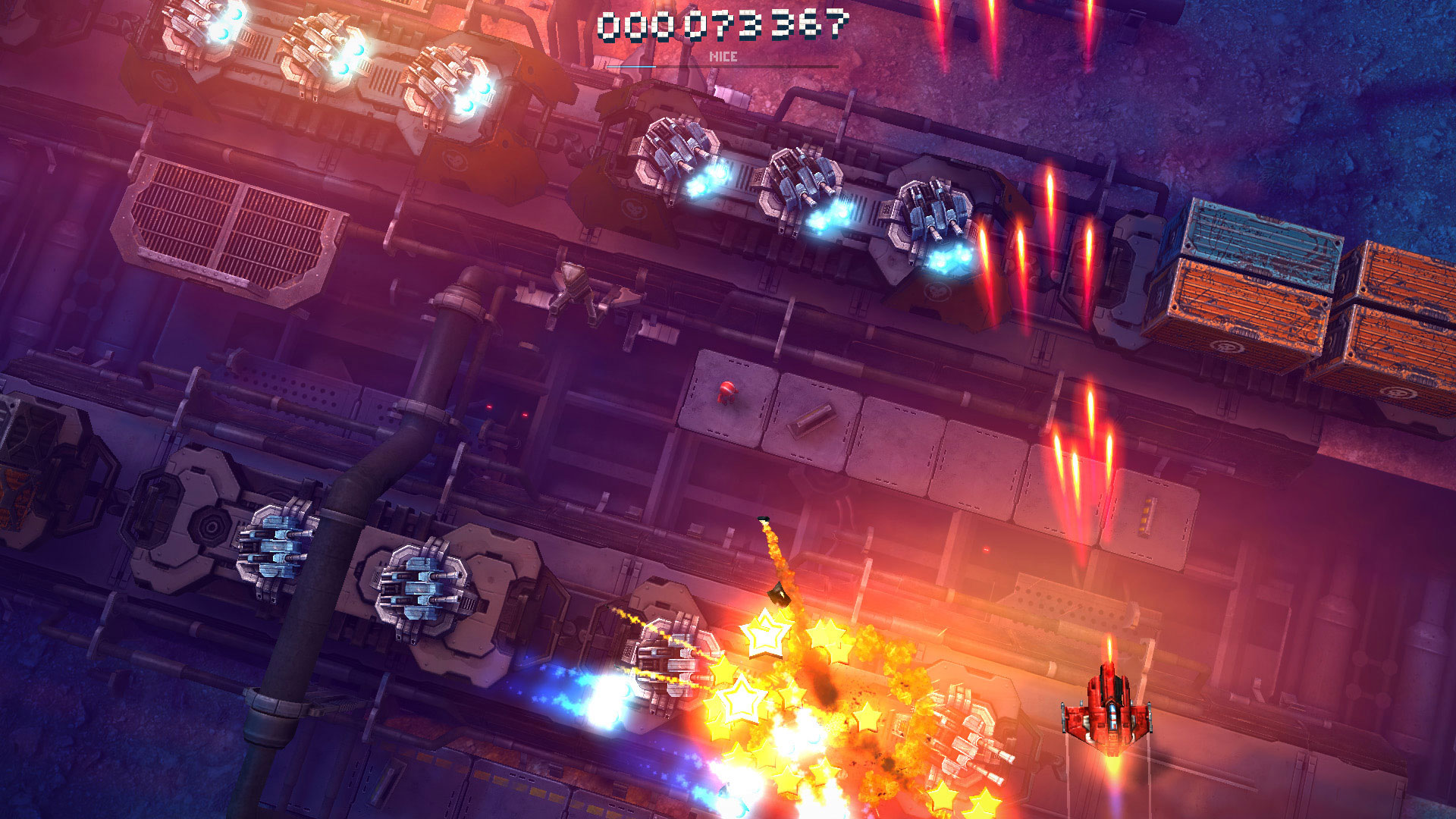 While it takes a bit to open up, Sky Force Reloaded kicks in nicely once you’ve got a properly powerful ship and a nice selection of medals to chase after through its wide variety of levels.  The main game consists of thirteen levels total, plus two bonus areas, and each one is distinct in both scenery and challenge.  The plane’s precision controls make navigating crowded screens a matter of skill, rather than feeling like you’re just holding on by a thread, and even the Insane difficulty level is approachable due to the experience you get from surviving Normal and Hard.  There’s a lot to chase after with all the pickups, powerups and bonus goodies Sky Force Reloaded throws at you, all attainable by a good combination of patience and skill.  The quest to take down Scarlett Mantis and her array of multi-stage bosses is one that will take several hours of happy shooting, getting a bit stronger on each new attempt and setting the screen on fire with the broken shrapnel of downed enemies until they manage to do the same to you.