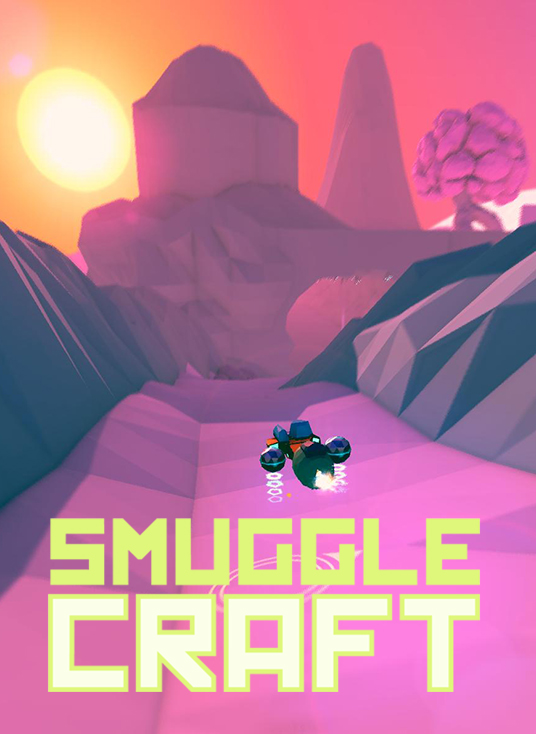 A smuggler’s life takes place dancing around the edge of the law, sometimes clearly on one side or the other and every once in a while on both at once.  Whether a job is legal or not isn’t so important as how much money it pulls in, and as long as the take is worth it then it’s time to load up and haul out.  It’s a little bit harder than normal when your vehicle is a hovercraft racing over the wastelands of a totalitarian future, but business is business and bills got to get paid.  SmuggleCraft tells the story of a young entrepreneur with a debt a mile high and a list of jobs just as long, and while the bulk of the work is helping random people, sometimes regimes get toppled, resistance aided or the occasional terroristic act abetted.  The future is rough, but there’s plenty of bouncy hovercraft driving to pay your way through it.

SmuggleCraft is a game of driving over randomized roads in a colorful wasteland, and if the vehicle in question doesn’t stick to the ground it’s still basically a customizable car with a unique handling style.  Racing, deliveries, towing, and retrieval make up the bulk of the tasks, but so long as you can keep the nose pointed forward and cruise along at top speed it should all work out fine.  SmuggleCraft is also buggy and unfinished, with several odd design elements all working against each other and a few that barely work at all.  Its heart is strong with the core gameplay being good fun, but this really should be an Early Access release rather than a final, reviewable game.  Let’s start with the good bits-

The main mode of SmuggleCraft is the Campaign, which tells the story of a young smuggler given a vehicle with a demand to repay the debt bit by bit on a daily basis.  Each day has four missions in it, which is plenty of time to earn enough money for the next day’s payout.  Miss the payment and the loan shark gets grumpy, making the missions harder by adding hostiles to the course, but as a rule you’ll have more than enough to keep ahead of his demands.  Most missions are randomly generated, but there are also a couple of factions that pop up once a day with story-driven requests.  There are multiple endings to choose from, depending on which path you take, and it doesn’t necessarily require you to be helpful.  At the end of each mission, regular or story, you can choose to either complete the request or screw over the client, usually (but not always) for a better reward.  Don’t like the guy organizing a peaceful resistance?  He’s worth 10,000 credits, which can be awfully tempting. 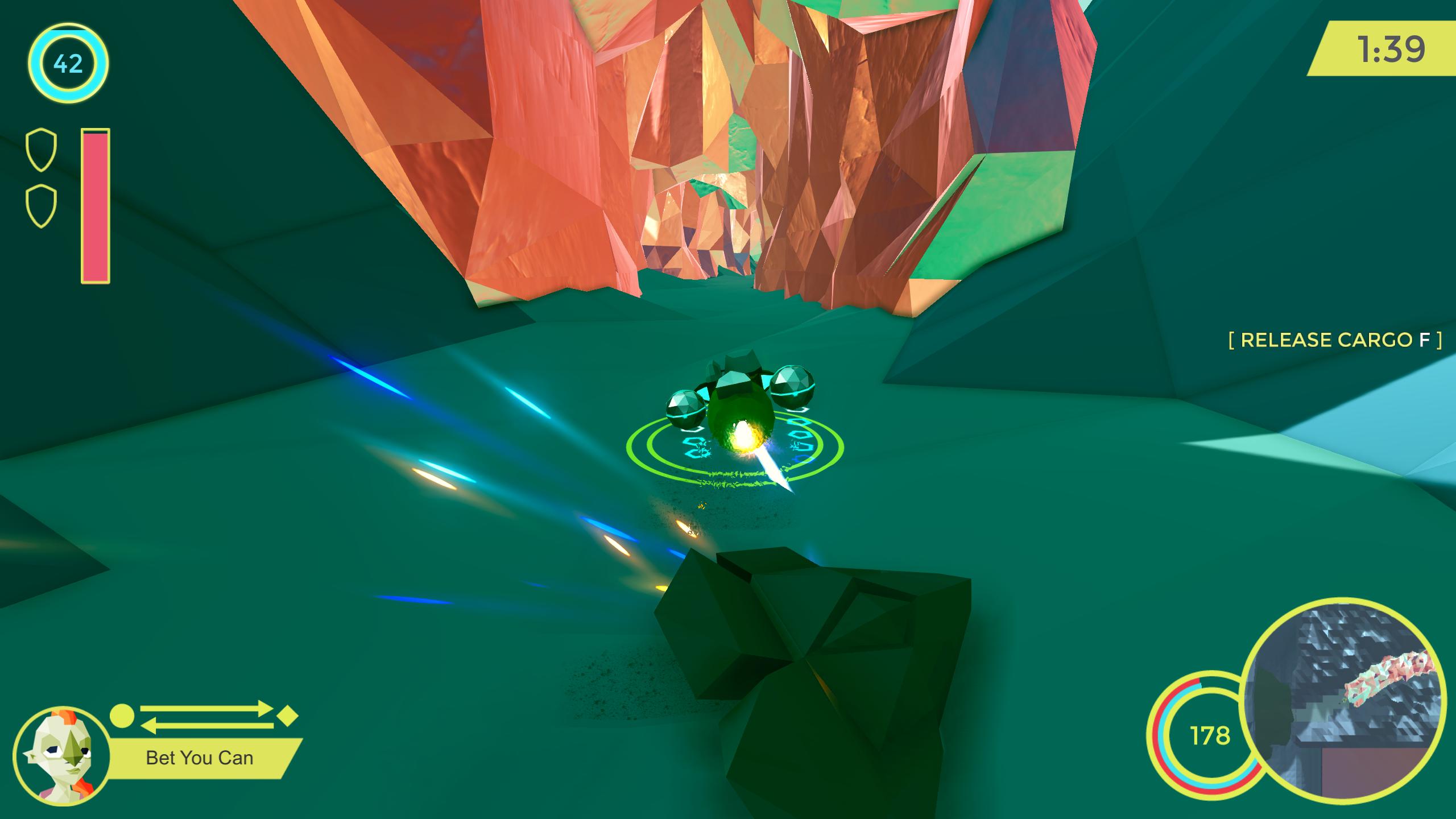 The missions you’re given all boil down to one simple directive- drive the hovercar as fast as possible.  Race, fetch-quest, scavenge, whatever.  Steer with the left stick, strafe with the right stick, and the right trigger makes you accelerate.  While everything but the race missions can be done at a slower pace so long as you don’t run out of gas, fast completion can earn a nice tip.  Energy is supplied by the orbs that show up on a regular basis on the track, and while not hitting the orb directly still grants you fuel, blowing through it earns a short burst of turbo as well.  Certain sections of the course also have small white and larger green orbs to collect, adding a small cash bonus to your bank account.  The hovercar is an exceptionally fun vehicle to pilot, bouncing over the terrain and jumping over hills and rocks, and once you’ve bought a few upgrades it becomes a near-unstoppable force.

The starting ship is fairly weak, of course, but it only takes a few missions before you start earning parts to buy upgrades.  Missions are rewarded in either parts or cash, and while parts come in three separate types you only ever get to know the number you’ll earn as a reward rather than what type you’ll get.  Upgrades come in a variety of categories, from engine or body to nose, cockpit, and stabilizers, and each type of part effects a set of stats.  Whether you maintain a nice balance or specialize in a specific set of features is your choice, but the craft you put together isn’t going to look much like anyone else’s. 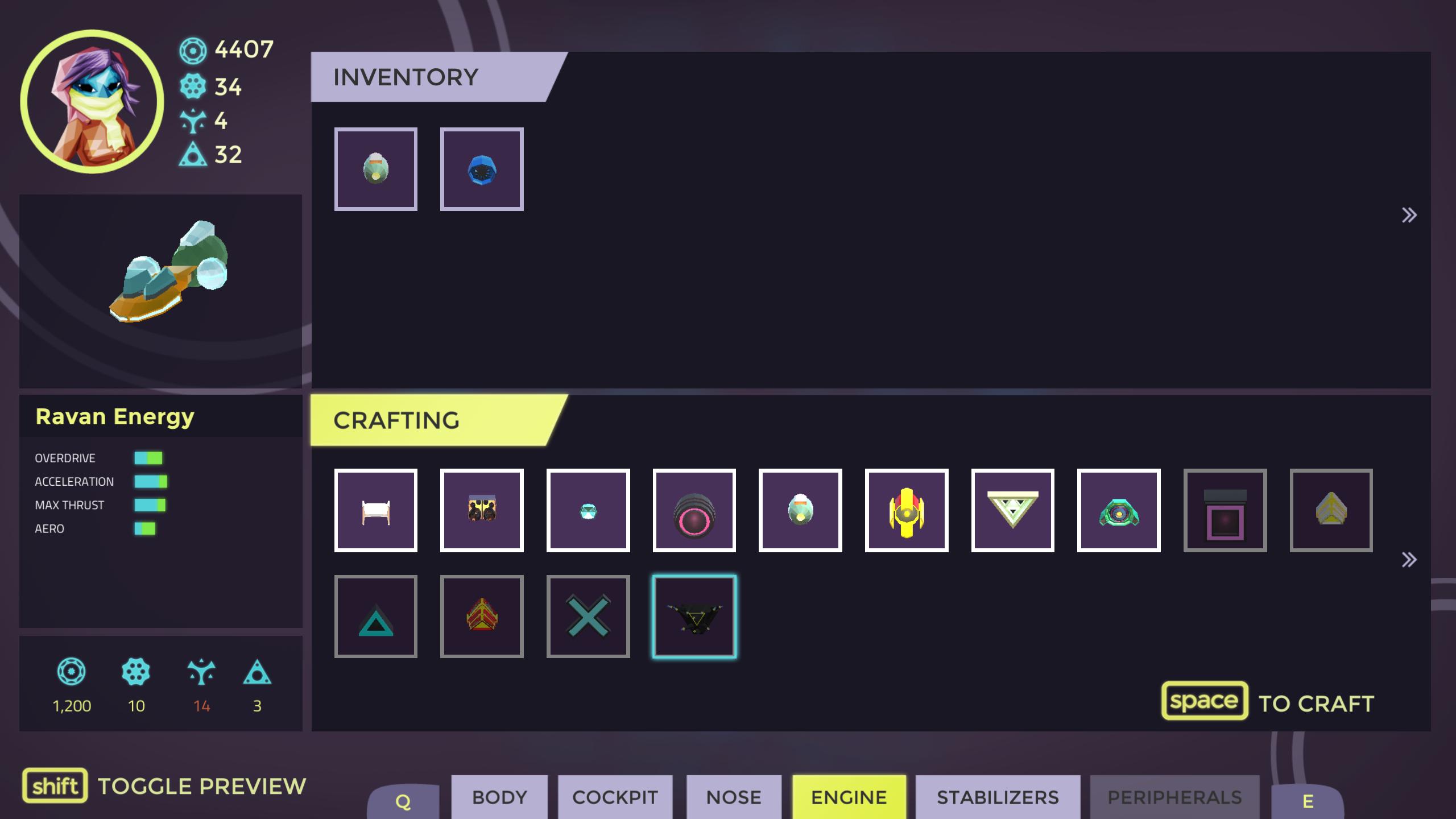 It’s easy to fall into SmuggleCraft‘s rhythm.  Race, collect reward, choose new mission, race again while working towards that next shiny upgrade.  The tracks are randomly generated, constructed from pre-built parts, and while they can be unclear at times as to which way you need to go there’s an arrow under the craft that always points in the right direction.  Falling off the track becomes incredibly rare once you’ve got a couple hours under your belt, but there are a few sections where the risk is high.  Failing a mission, running out of gas, or getting caught by the authorities is only a monetary setback, but falling off the track is death, and here’s where SmuggleCraft‘s problems begin.

SmuggleCraft has a single roguelike element in that death means you start the Campaign mode over from scratch, no money and no parts.  Or you could just hit pause while falling off the track and reset back to the mission selection screen with no penalty at all.  Each in-game day sees you paying off the loan shark in the morning, and if you restart the morning mission he collects again, taking the payment off the total.  (Which is actually pretty handy when you’ve got plenty of cash and want to dump it.)  The game can end a different way, though, and that’s if you complete the story mode.  This takes about two hours or so, and once it’s over you re-start campaign mode with no cash, no parts, and the debt topped off again.  Which is incredibly frustrating if you didn’t realize that was going to happen and were saving up for a powerful new engine.

Other issues include-  Sections of land that don’t line up right, creating a gap you can drive straight through and into the deadly abyss.  Cut-scenes that have no audio, just dead silence.  An upgrade screen with multiple ways to compare the effects of various parts, only one of which is useful.  Parts that are primarily cosmetic in difference, with the change in stats so small as to be unnoticeable.  A turbo boost used by holding the gas trigger down when at a slow speed or standstill, which is perfect for starting a race but not so much when you’re on a thin strip of land, have lined yourself up mostly right, and forget that not easing int is going to trigger a burst of acceleration that sends you flying off the track.  And, finally, menus that don’t respond to gamepad inputs, plus a mouse cursor you have to manually shoo off the screen.  I reached out to the developer to ask after a few of these issues, and was assured that work will continue post-release to clear things up, but the game I’m reviewing is the release candidate rather than what might exist a few months down the road and SmuggleCraft simply isn’t done yet. 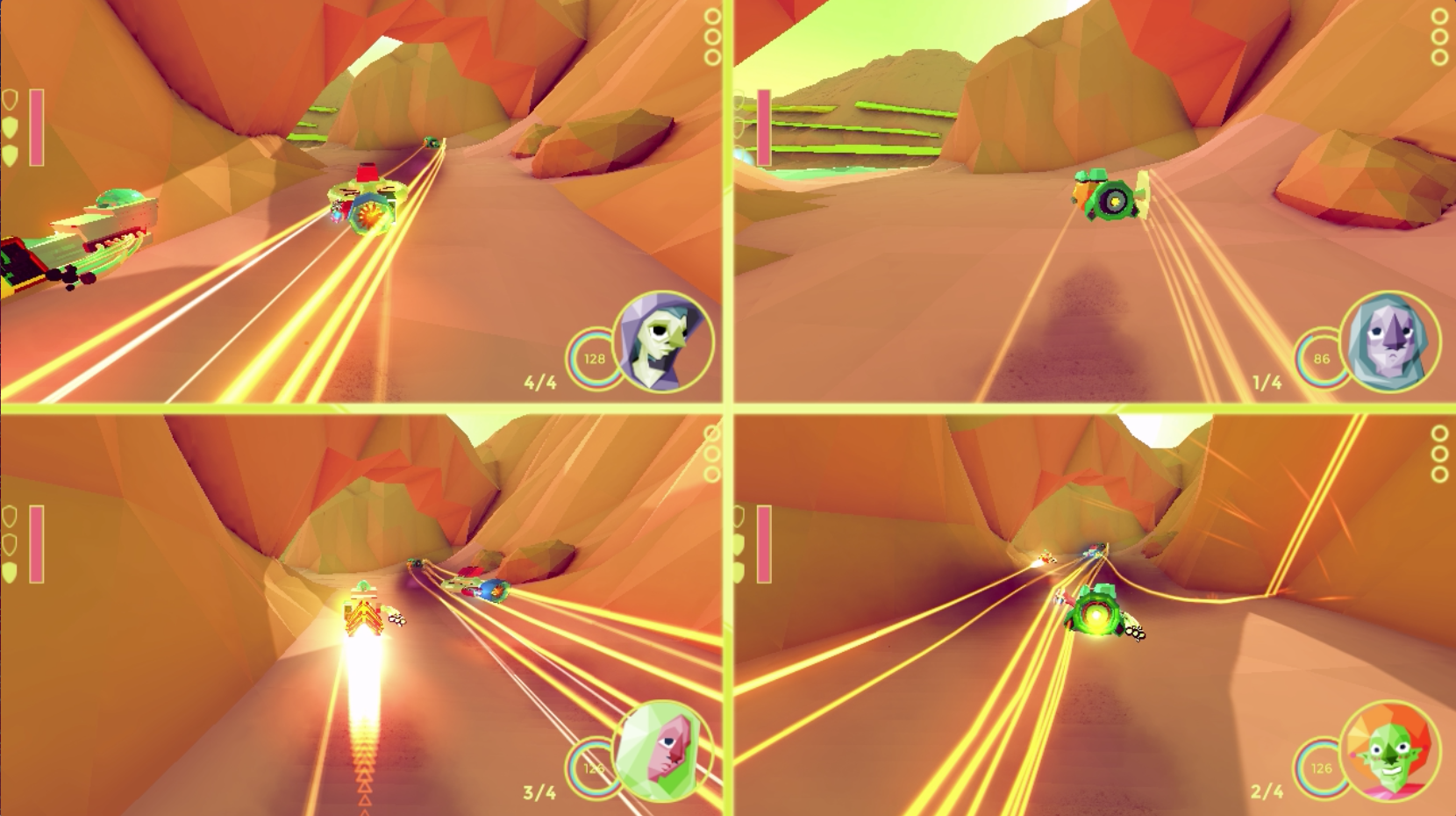 Despite all its issues I honestly enjoyed SmuggleCraft.  The tracks are a bit lonely, the challenge level is fairly low even when a mission says Death Trap and the menus desperately need another round of polish, but the courses are beautiful and fun to fly through in their detailed, low-poly way.  Zipping through a canyon at mid-day looks very different from dawn, and weather effects dress up the scenery as well.  Most sections can be done by tearing through at high speed but every once in a while you need to let up on the gas during the thin, guard rail-less sections, and while it’s eventually unlikely you’ll fall off the edge failure is still a possibility.  There’s a lot of work left to do to get SmuggleCraft to become the game it should have been on launch, but if it can get there it’s going to be a fantastic chase through gorgeous low-poly worlds.