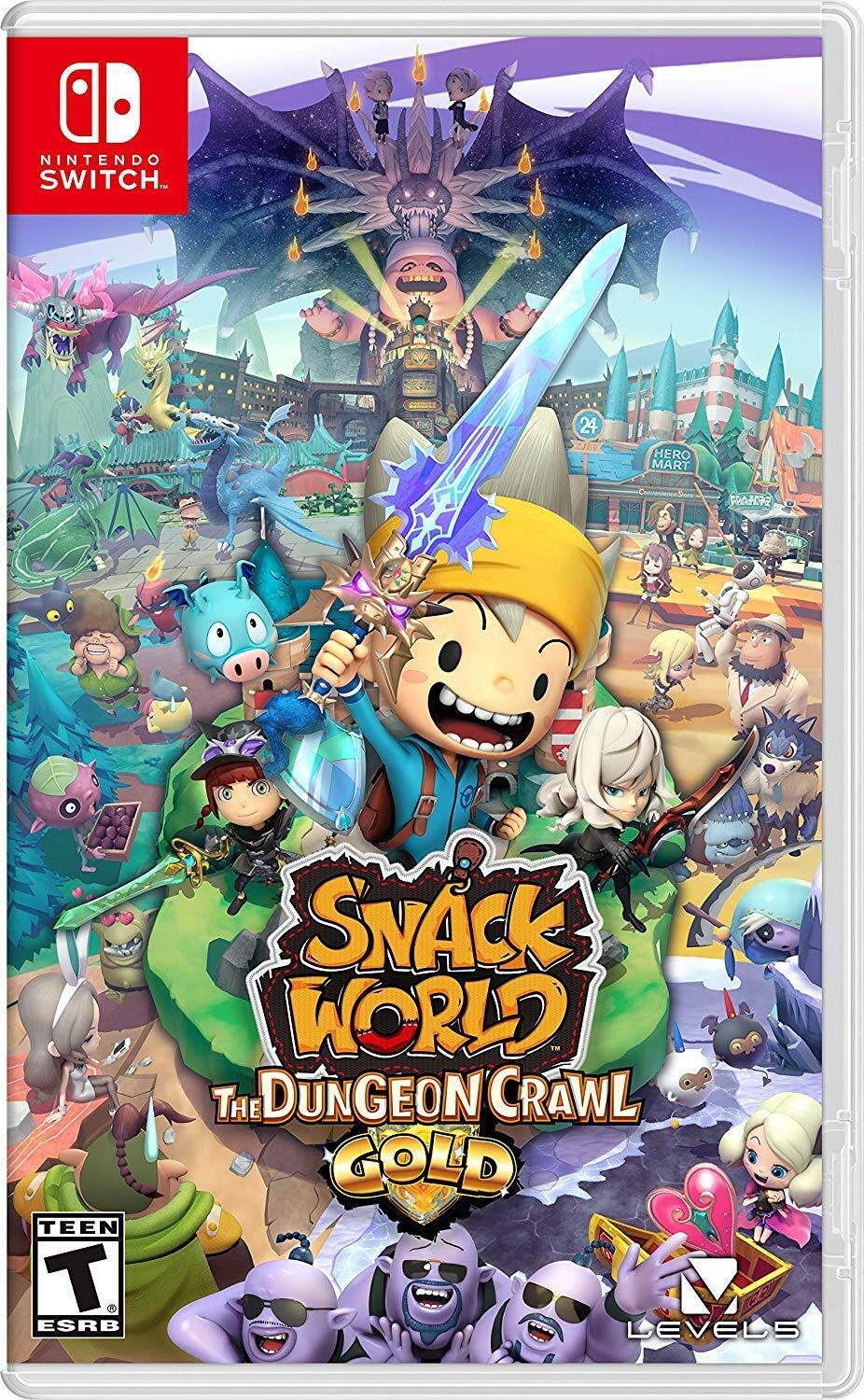 Before releasing as a video game for the first time, Snack World was a manga series running in Japan’s CoroCoro magazine. It would also see a lengthy anime a year later and finally released its first playable title back in 2017. This 3DS title at the time would not see a western release, but a year later did launch an expanded port on the Switch for Japan. Now, two years later, this original Snack World title has been localized as Snack World: The Dungeon Crawl – Gold and is giving players the chance to dive into this unique world created be Level-5 for the first time. As one of Level-5’s many multimedia franchises, how well does it stand up as a memorable experience?

Snack World’s story takes place in a unique fantasy world the combines modern staples, like smart phones, with crazy adventures with swords and dragons. It all begins when a lone adventurer, created by the player, is found passed out near the main city. The King’s daughter is wildly interested in the adventurer and asks to meet them, wherein this adventurer soon learn their time will be taken up by the whims of the princess. The princess has many desires and while the hero’s main goal is to stop nefarious villains, many of their adventures will be going out to fetch some item the princess desires. This world is also ruled by fashion with adventurers seeking out the latest and greatest in color, style and branding. Keeping all that in mind is important to become the adventurer who will help save the world, whether alone or with some help.

In Snack World the main objectives take place in various quests. These are given as main story objectives or side quests that can be gained from talking to NPCs. Once they’ve been accepted characters can gear up and then head out. Each area is typically in an overhead style map, with the exception of some behind more third person during certain areas or boss fights. There are two main styles of exploration maps that will be encountered with the first being a static area that will never change in appearance, but will often vary in enemies. The second is the actual dungeons which are proceduraly generated to be different each and every time. Dungeons typically have multiple floors before a boss fight with the goal being to find the exit while exploring for treasure and fighting off enemies. These dungeons are home to many secrets and treasures, making exploration a worthwhile endeavor. Enemies will continually respawn after a time, but they are never forced to be fought and can be ran past in order to keep moving forward. 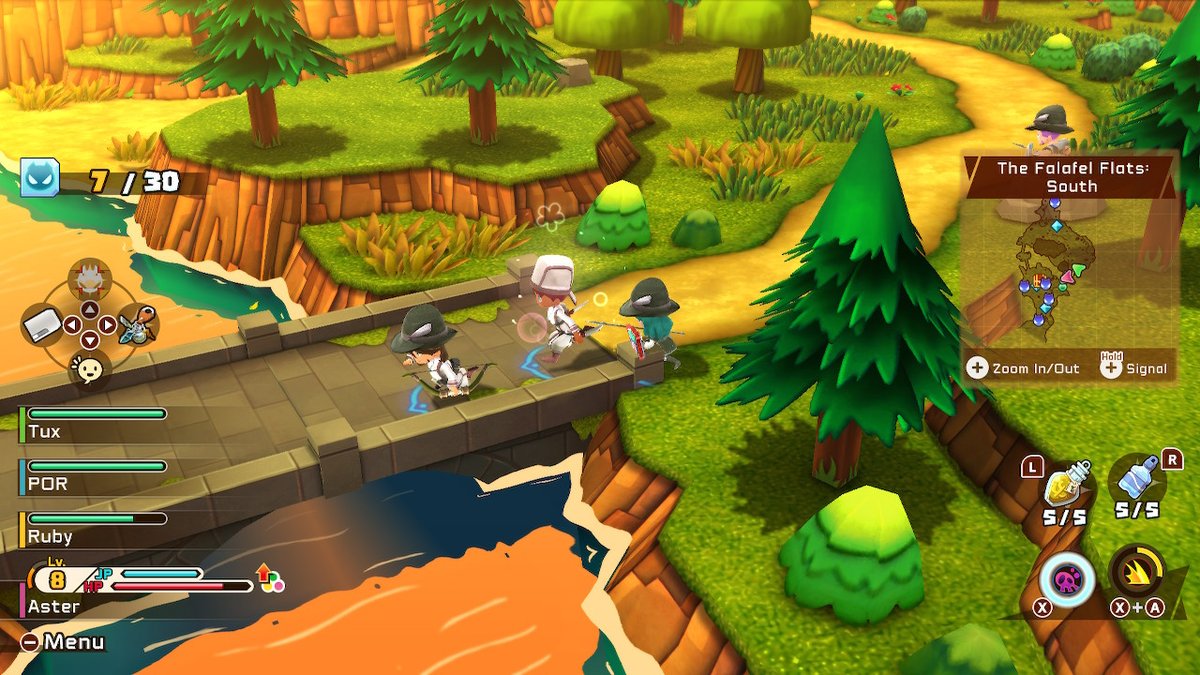 One of the biggest combat mechanics in Snack World is tied to its weapons. Weapons are equipped on the Jara holder, which allows players to take up to six weapons or shields and two passive drinks into combat. Each weapon has a type of creature its strong against, usually multiple, with each weapon type having a unique weakness chart. This makes it extremely important to collect every different kind of weapon, as using one that a monster is not weak to can make fights last an extremely long time. Fortunately each quest lists the kind of monsters that will be found so players can select the appropriate weapons or have it auto select before heading out. Every weapon has a JP meter when in combat, which decreases based on its weapon type when attacking enemies. If the JP bar is depleted, the weapon will be painfully slow and require a switch to a usable weapon. While one enemy might be weak to a select sword, another may be weaker to a separate weapon equipped. Fortunately there’s an easy way to tell while targeted on a monster, as the middle bottom of the screen will have an icon show up letting the player now there’s a more effective weapon they could be using. Pressing the relevant button shown will switch to the weapon that’s most effective at the moment, allowing the currently fought monster to be taken down with more ease. Weapons can be bought through the store or found as rare drops in dungeons. One big key element to dungeon exploration is that every mission has one rare drop, most often a weapon, that will sometimes require the quest be completed multiple times to get. It’s worth collecting even more than one due to the fact that in order to upgrade weapons, another of the same type must be used to make it stronger.

While picking the right gear for an adventure is important, so is dressing for the occasion. Characters have two different slots for wearable equipment; one for their main armor which offers them abilities and defense and the other being their fashion equipment. Every real-time day the top trends change throughout the Kingdom. The top trends are important and not just for high fashion as wearing better trendy clothing for the day increases the rare drop rate of items. Being trendy ties into color, style and brand with each one increasing the rare drop chance by a tiny amount. Combined together this can double the chances at rare drops, making it well worth checking every day. Each piece of armor, or clothing, will have a default style and brand that cannot be changed. The color, however, can be changed when the piece of equipment is upgraded and from then on be switched between any unlocked colors. This applies to weapons as well, whose colors and strength will increase as its upgraded. This makes the armor, no matter how weak, worth keeping and upgrading in order to have a lot of variety that can be worn to increase drop rates. It’s one of the few times where weak armor remains relevant throughout an entire adventure while also making complete sense as to why, so players can always keep their favorite outfits and wear them for bonus effects even if they aren’t the strongest. 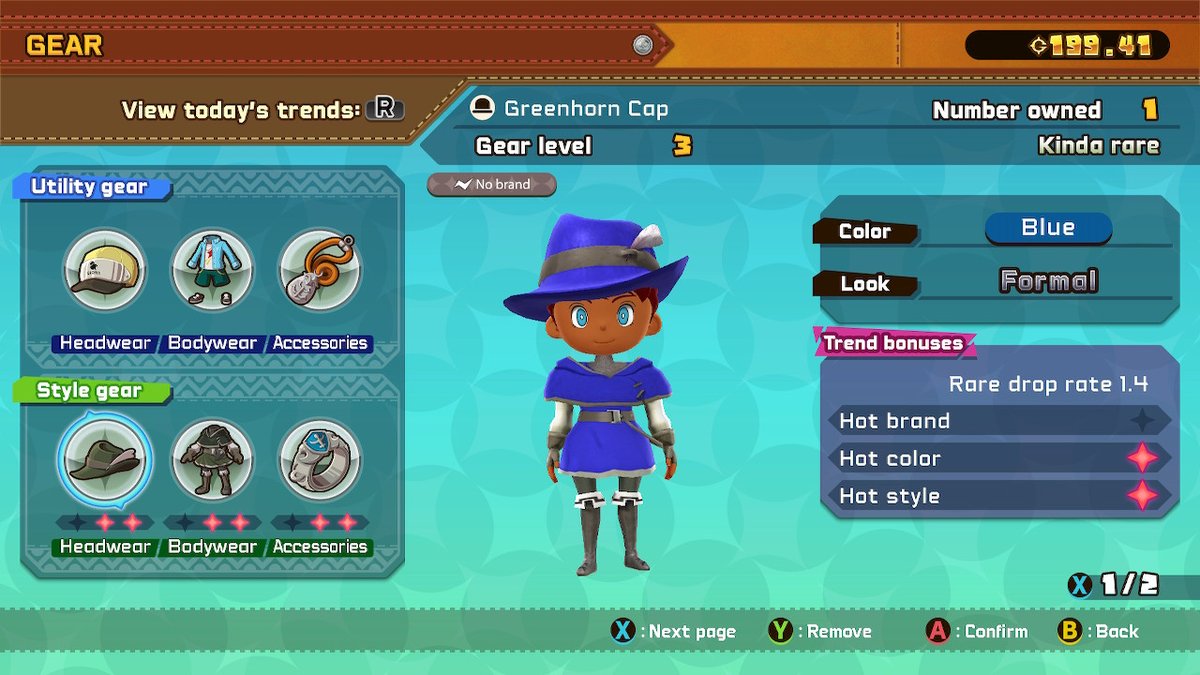 Although the entire title can be played solo, there are a couple ways players can get some companions while exploring. The first is with snacks, where players can take pictures of certain passed out enemies or get a snack shot of an NPC in order to have them join. Some snacks are unlocked via quests and up to three snack allies can be taken into a quest at a time once they’ve been unlocked. There are also pocket snacks that can transform the player when they’ve been charged up into a selection of equipped snacks in order to offer different abilities and skills while exploring. The second way to go dungeon exploring is to head online, where up to four adventurers can meet up and take on quests together. Multiplayer online allows characters to participate in side quests together, but these side quests are some of the more challenging and are well suited for multiple players. This is one of the most enjoyable ways to play as going into quests is quick and snappy, allowing easy access to playing with randoms or quickly connecting to friends without much issue. The connectivity also feels solid with low noticeable lag if any, but experiences may of course vary.

Snack World has a wonderful art style. It’s charming and simplistic, while also having tons of details that make everything pop. It’s reminiscent of 90s cartoons, which is fitting given its manga and anime start, and manages to fit in puns for nearly every character and item to a delightful degree. The music is generally cheery and upbeat, with even the dungeon music having wonderful catchy themes to them. Loading times are snappy and fast, with no noticeable frame rate issues aside from the potential of some online lag. It would be nice if there was a way to quickly skip dialogue that has already been read on replays of levels, but it can at least be sped up in order to hurry along. 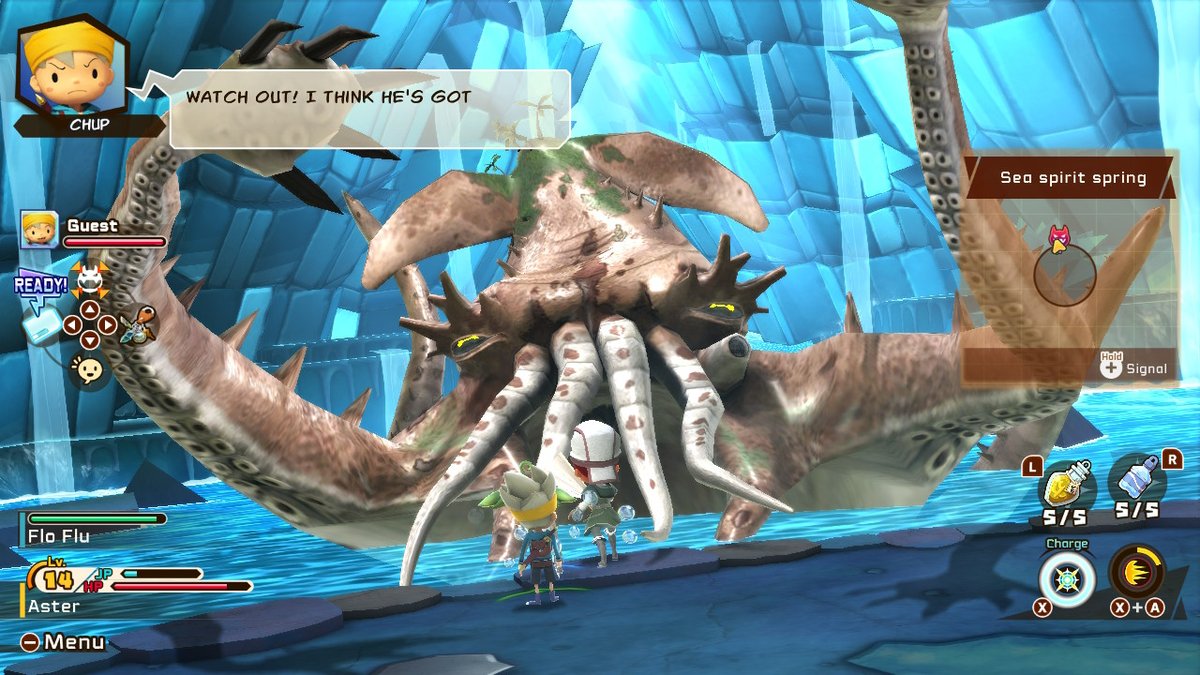 There are tons of dungeon crawlers out there, but Snack World is a complete and utter blast that makes it hard to stop playing whether solo or online. It’s a hop on hop off kind of title, with it being satisfying to play for just a short period or going all in and trying to collect a ton of new gear in order to become even stronger. While it starts out easy, it ramps up in difficulty and strongly encourages seeking ways to get stronger in addition to being aware of enemies and being sure to dodge attacks. There’s just so much that Snack World does right for a dungeon crawler that even without having any sort of serious story it manages to be one of the best in the genre with the sheer fun variety it offers. Anyone looking for a brand new adventuring title should give Snack World: The Dungeon Crawl – Gold their time as it’s surprisingly fantastic.