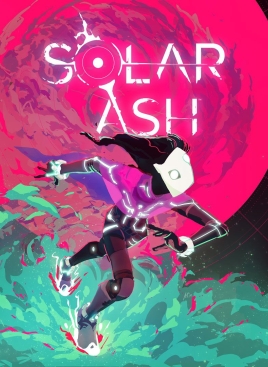 Back in 2016, developer Heart Machine impressed with their debut title Hyper Light Drifter. It wowed in many ways, including its amazing world and graphics. And even with the leap into 3D with their latest game, Solar Ash, Heart Machine still shows that they can impress us with their visuals as you stare out across a series of majestic waterfalls, looking out into the vast distance and seeing the sleeping giant in the middle of it all, the eye-pleasing blend of colors, like an epic bit of fantasy artwork…it’s almost enough to make you forget that the water is actually acidic and can kill you if you’re in too long, there are corpses strewn about the area and there are creatures rushing at you right now, primed to attack. Heart Machine are still capable of wowing us when it comes to action as well, and Solar Ash is proof of that.

Solar Ash is the story of Rei, a Voidrunner that’s part of a space-faring crew given a simple task, that of just waltzing into a massive black hole known as the Ultravoid and activating a giant device known as the Starseed from within it so that their home planet won’t get sucked in and face extinction. You know, average Voidrunner work. But once inside the cluster of worlds assimilated into the Ultravoid, Rei awakens to find themselves separated from everyone, with all of the Starseed’s conduits offline and out of reach, and several jet-black, oozing creatures and gateways blocking everything off. Assisted only by the crew’s computer, Cyd, Rei has to figure out just what the heck happened while activating the Starseed, which is made difficult by a mysterious figure in a bloody void urging Rei not to go on and chipping away at their life bar…

Without going into spoilers, Solar Ash doesn’t necessarily have the story you might expect upon first glance. What we get here is an impressively-told tale of loss, determination and moving on, acted out with a terrific cast of characters, with Rei being an enjoyable protagonist. It helps that the supporting cast they work off of, while small, is a colorful lot that much like in Death’s Door — another action game this year that covers similar themes — brings this perfect mixture of gut punches and levity to the table, knowing when to perfectly use each character’s various strengths. The story also takes a few nice twists along the way (even if one is easily predicted almost immediately after a character’s introduction), ending on a nicely bittersweet yet optimistic note, making for something that can still suck you in. 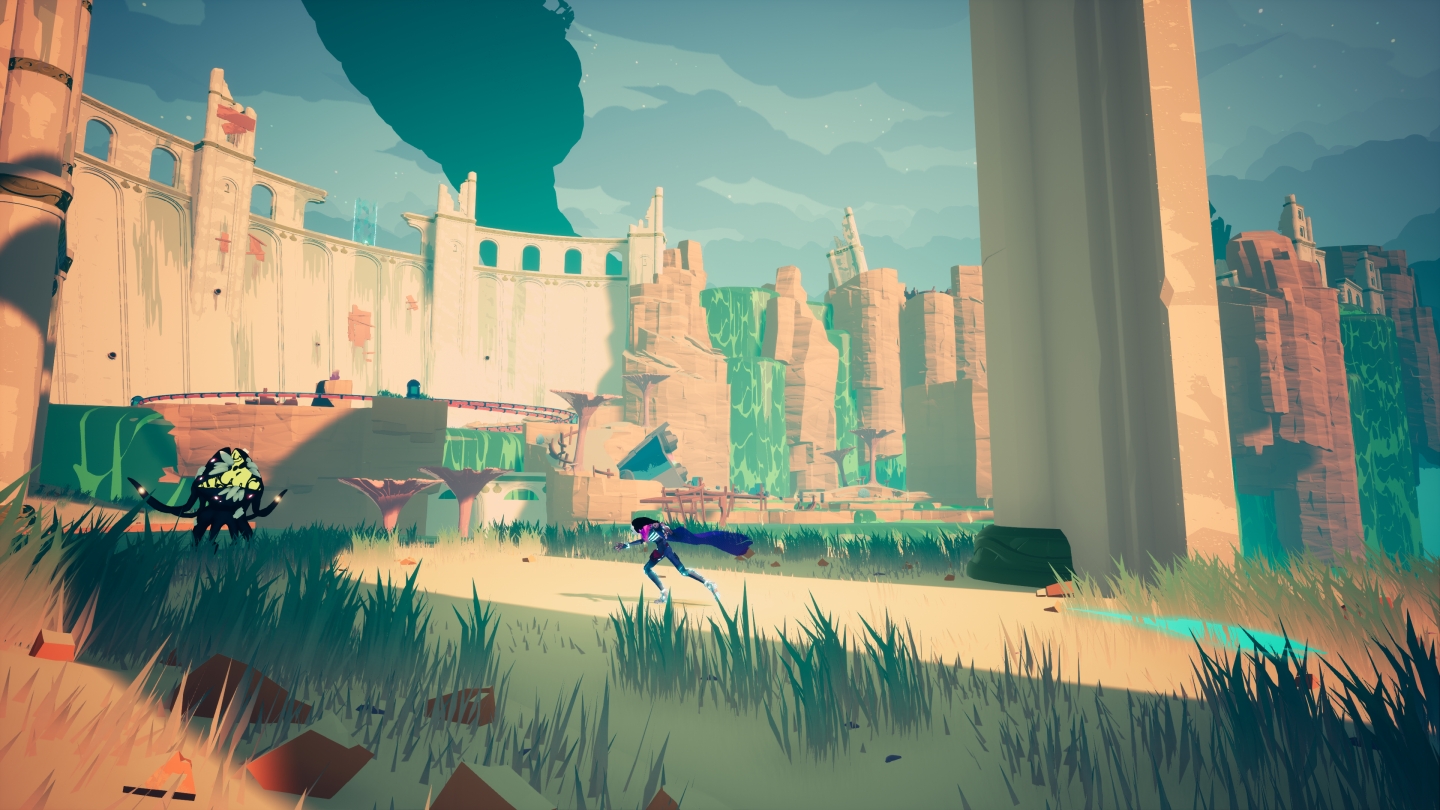 The part of Solar Ash guaranteed to suck you in, though, is its amazing level and world design. As mentioned earlier, the Ultravoid has swallowed several planets prior to the game’s events, and you get to see all of them in various ways, a look into the various cultures inhabiting each world as you speed or stroll through them, and each landscape and its various styles and bits of architecture are amazing. Even in a ruined state, these are truly stunning and surreal landscapes, packed with practically every color in the rainbow and as wide and open as possible, with countless ways to traverse them in practically every direction, from grinding on massive rails to sprinting across the shifting, dreamlike clouds that bridge gaps on the ground to making huge, boosted leaps across acidic pools. Throw in a nice chunk of audio logs, extra currency and side story moments in as secrets, and you have something more than worth exploring.

Of course, all of that exploration means nothing if there’s no enjoyable gameplay to go alongside it. Describing the core gameplay of Solar Ash may be tricky, if only because it feels kind of like an amalgamation of parts from other games, such as Jet Set Radio, Super Mario Galaxy and Shadow of the Colossus to name a few. But it winds up utilizing the best bits from those games, mainly the thrill of movement from the first and the gravity-bending bits of traversal from the second. There’s no real way to elaborate on much of it, though, as all one can say is that traveling around is a blast. The controls are nice and simple, allowing Rei to effortlessly skate across surfaces and easily transition to grinds and massive leaps, all while keeping this perfect sense of momentum and weight, making sure you get that feeling of speed whenever you want…it’s just fantastic. 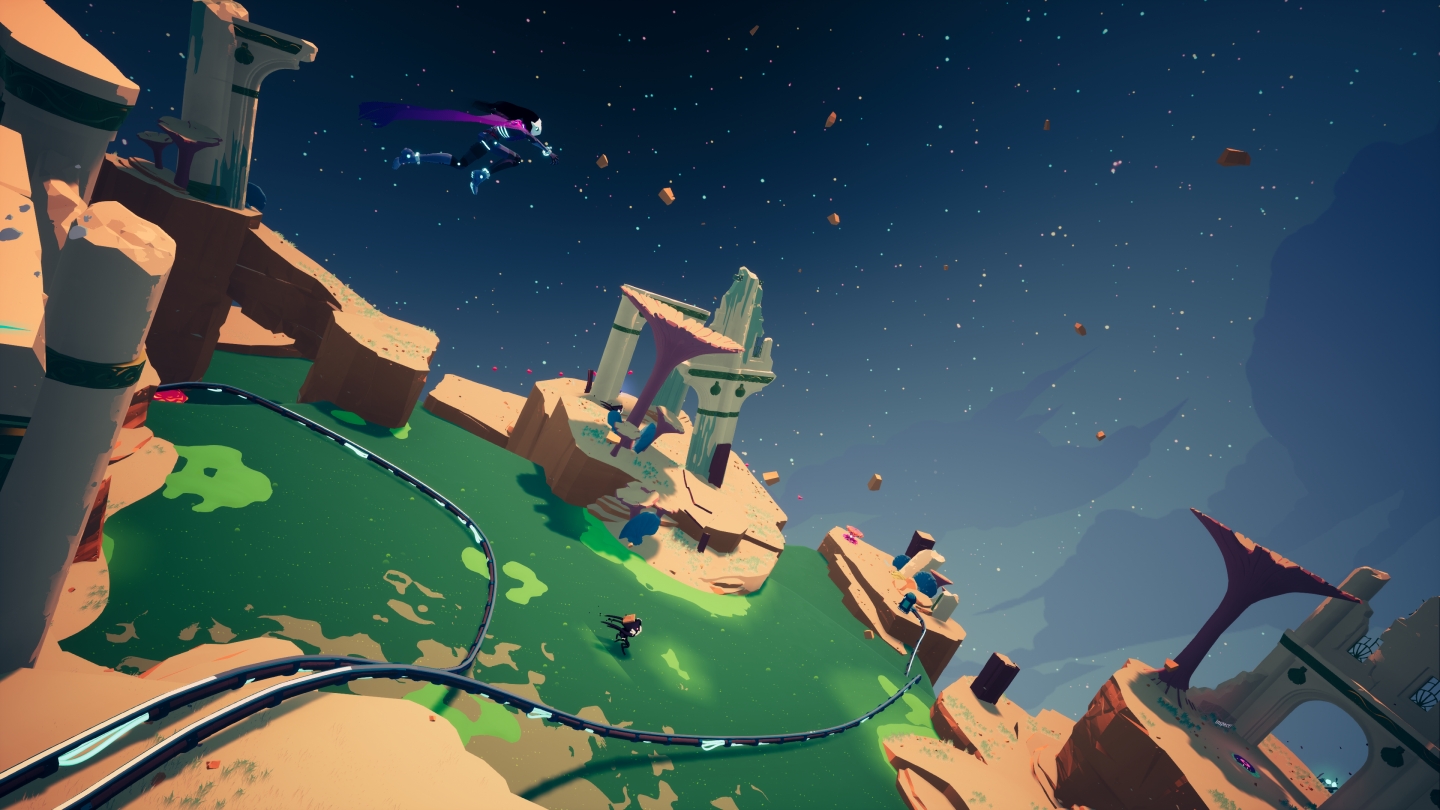 There’s a reason why Rei has to move fast, though, and that’s because the main goal in each level is to rid it of a certain amount of anomalies in order to trigger the boss fight and bring the nearby conduit online. In these moments, Rei has to attack the nerve ending on a sort of sentient ooze spread out across an area, then get to the next one in time, and the next, before eventually getting an opportunity to finish it off. This is where the game threatens to get repetitive, but luckily, it never comes to that, since Solar Ash knows how to keep its obstacles perfectly varied.

Most of the time, the real challenge is even getting to the anomalies in the first place, tracking them down after activating Cyd via the conduit in each area so that they can mark them on your map (where they can also let you switch unlockable suits with new abilities and let you buy back maximum health with plasma you collect). Between you and them are a good chunk of enemies with some simple yet effective attacks that put up a challenge (Rei settling for a series of similarly simple yet effective and fun strikes as well), but also various climbing obstacles, platforming segments that rely on speed and precision, and environmental puzzles that range from delivering mushroom spores in time in order to open doors to delivering energy to a platform that launches you to a new section. Solar Ash knows how to shake things up and keep you on your toes while never detracting from the core gameplay. 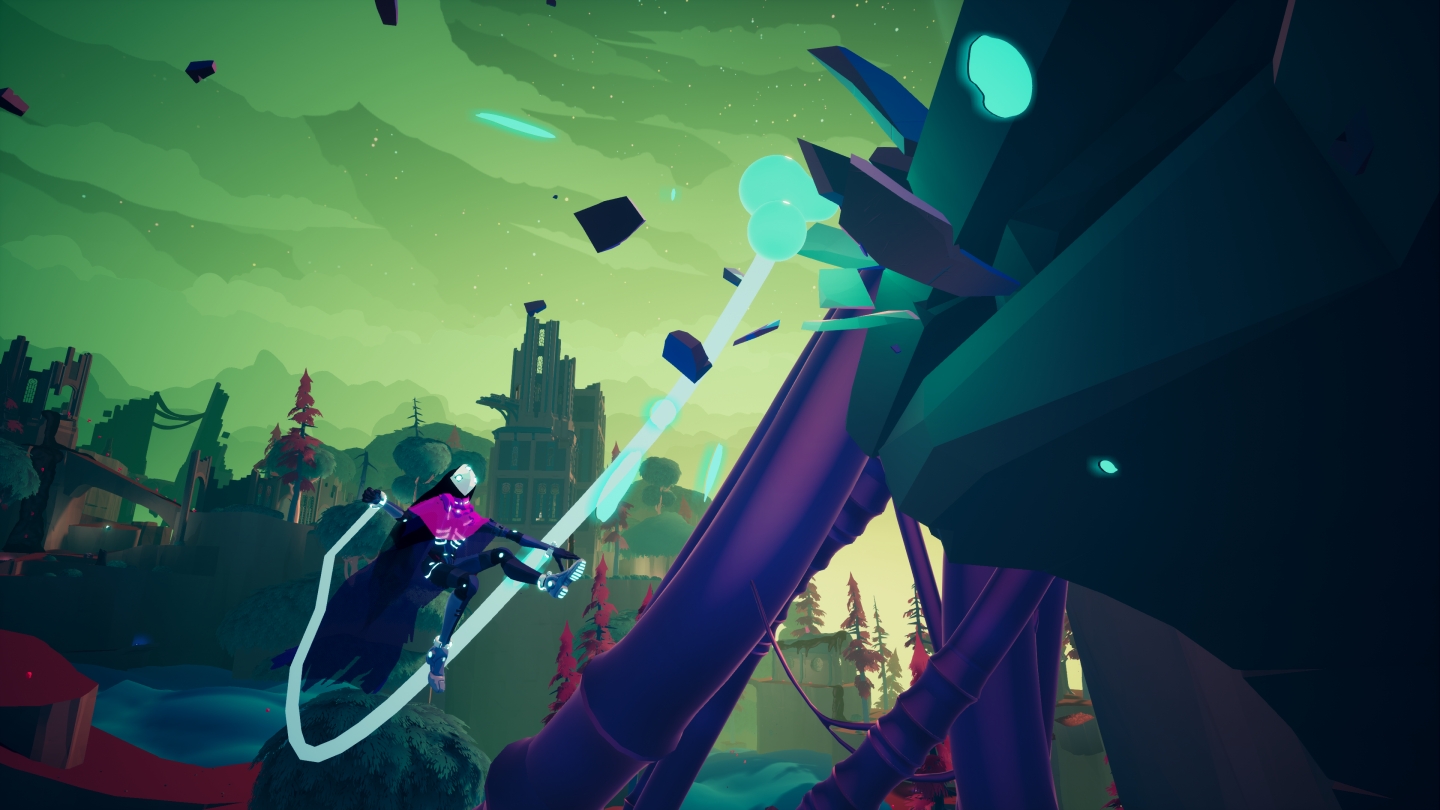 Then there are the bosses. After fixing all of the smaller anomalies getting in the way of each conduit, a massive Remnant built out of bone, eyes and a creepy tar-like substance fully awakens, and starts wandering around the current map, towering above you and occasionally launching attacks at Rei if they get in their way. The only way to stop them is to find a weak point that lets you climb onto them, and like the anomalies, has you attacking a long string of their nerve endings in one tense sequence as you jump, boost and grapple from bone to bone, trying to hit well over a dozen of them before time runs out, which you need to do for three phases. And each phase sees the Remnant crumbling apart in various ways, shambling around, seemingly suffering through it all. Much like the titular creatures in Shadow of the Colossus, it hits that perfect mixture of majestic and tragic, boosted by the amazing visuals as the monochrome mammoths stand out among the colorful landscape. The remnants are an amazing sight in Solar Ash…and also one of its few notable weak points.

Everything about the Remnant boss battles should click, and successfully completing a phase in the nick of time provides a rewarding feeling, but the execution can be sloppy at times. This is the one area where Solar Ash honestly shouldn’t have focused that much on speed, but the time lengths between nerve endings can be strict on occasions, not helped by certain movements of the Remnants and camera angles getting in your way, leading to points where it feels like even one slip-up gets you knocked off and back to square one. Sometimes things even get so chaotic that it almost feels more like a quick-time event, as you lunge forward and press the button to attack or grapple at the right time, based solely on visual cues. It basically becomes a frustrating game of trial and error, and because you get dropped off at a checkpoint right near some health ninety percent of the time, it doesn’t even have a high challenge level.

But that’s just a single smudge on an otherwise mostly flawless gem, though. It’s all of the little joys that make Solar Ash’s nine-to-ten-hour journey a success, like the almost retro-inspired sci-fi sound effects that expertly play at key points as part of the chill soundtrack and the awkward charms of one character’s poetry attempts. But that’s all on top of the smooth gameplay, where Solar Ash leaves its biggest impact, one even more than any thundering step a Remnant could take. 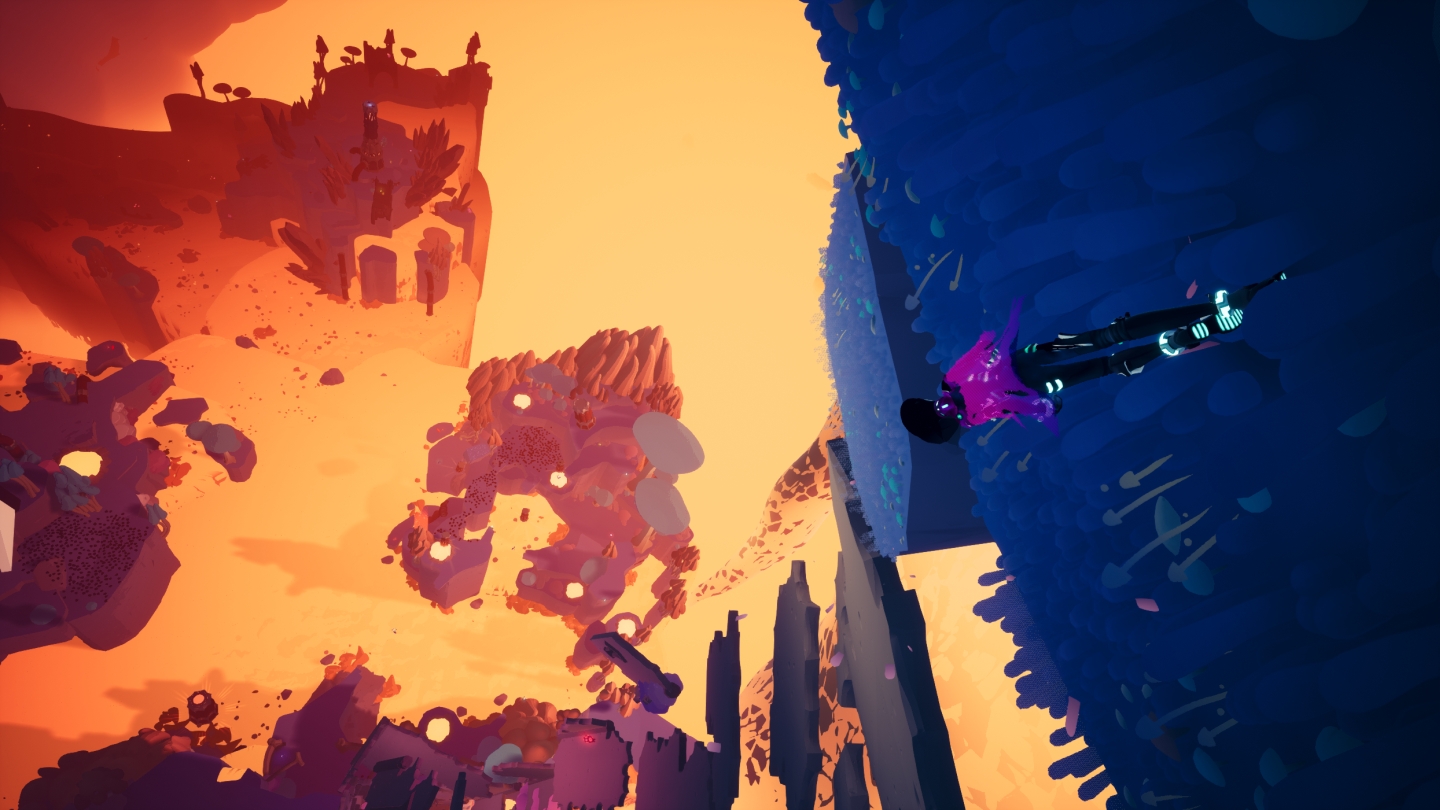 Solar Ash is another triumph from Heart Machine, a fast-paced burst of vibrant, surreal science fiction where players get to glide and jump around fascinating worlds with terrific bits of platforming and action spread out across a series of unique worlds with jaw-dropping visuals. Be it gliding across clouds, grinding on rails to jump between buildings, or sneaking up on and successfully slashing at the one wall-based creature that fires lasers at you, virtually everything here is an absolute joy to experience. This is easily one of the year’s most captivating games, and one to not miss out on.