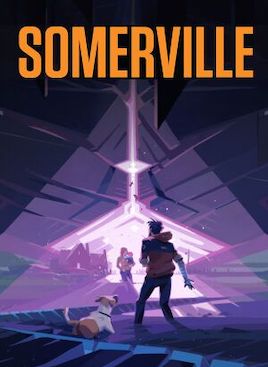 Can you believe it? After so many years of trudging through familiarly-oppressive and downtrodden surroundings from left to right, we finally have a game that breaks from out that established norm. Now, past its first chapter, we’re traversing right to left this time. Amazing! OK, enough [attempted] witty sarcasm, in one’s defense it does raise a point about the kind of game — from even as early as its first few scenarios — Somerville so clearly and blatantly on its own part slots into. Regardless of how developer Jumpship’s debut may want to be perceived and read by the wider world, it’s hard not to refer back to the past, perhaps iconic, work of Playdead. Familiar themes and means of presentation very much weaved into the fabric of the two games that cemented this style of adventure/puzzle-platformer: Limbo and Inside.

Voiceless/wordless story-telling; bleak, often restricted and desaturated color palettes; open-ended meaning as to what one may constitute a narrative end. And throughout: a feeling that the player-character is never too far away from an untimely demise — be it at the hand of the environment, or some other more sentient lurking presence, hunting them down at every turn. Playing through Somerville — brief an investment that may be in its roughly three to four hour run time — feels in many ways like an involuntary checking off the list of tropes and usual suspects many have grown accustomed to in this sub-genre. Physics-based puzzles, check. Segments that have you hiding from prowling vision cones, check. Chase sequences that end with the assumption of surviving by the tiniest of margins, check. Long stretches where one isn’t exactly sure what is going on, why it’s going on and if any of this build-up is leading to a satisfying pay-off and conclusion, check.

Whatever you may think of Playdead’s past work — whether you love or loathe the manner their games ended specifically — you can’t claim the unsettling demeanor and doubling down on the surreal doesn’t make up for their oblique nature. In a way, it’s understandable that Somerville is intentionally distancing itself. Seeming to take a step back in some respects from that prior direction. Instead, attempting to tell a tale not of direct oppression, but one of getting caught amidst two warring forces. Your character a mere run-of-the-mill father whom, after an early segment, finds himself split from his wife and young son. The main premise simply having you attempt to find and reunite with your family, all while surviving what appears to be an other-worldly conflict between two factions. A conflict that, for whatever reason, has found its way to Earth. Or at least, that’s how one reads it and still reads it coming away, having been given little, if any, clarity on just how close/far that guess may be. The how and why behind all this is left by the wayside for most of Somerville’s duration and while something like Inside can be forgiven for its otherwise abrupt conclusion — by way of its prior and interestingly-unsettling build-up — Somerville sadly isn’t. 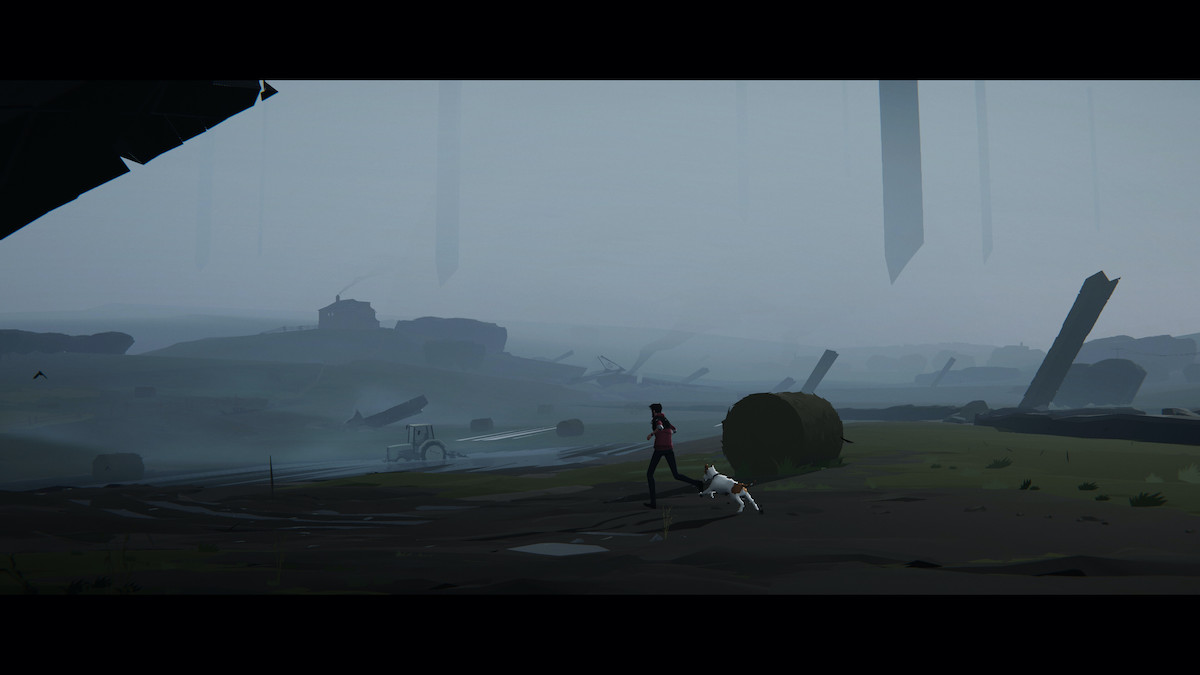 It’s because the game is going for something more personal and emotionally-rooted, all while trying to establish a scenario equally puzzling, where this approach doesn’t quite work. Somerville is wanting to have its cake and eat it too, but such brief a spell coupled with an unsatisfying climax means Jumpship’s debut isn’t as hard-hitting or interesting as its narrative progression perhaps assumes all too foolishly. Aside from momentary visual storytelling, it becomes clear early on that Somerville’s reasoning and explanation for what’s going on isn’t the main priority. Which for the most part is fine, given the emotional pull is as effective or as fleshed out to compensate. This would of course be a greater problem than it is were it not for the other key focus and that’s the puzzle design and general philosophy on how said puzzles are both orchestrated and delivered to the player.

If nothing else, Somerville does a terrific job at restraining itself from making things too obvious to work out on first go. Even if that does mean players will likely die on the first go — not least during moments that have you running from or between perilous encounters — death in Somerville feels anything but unfair or unpredictable. More times than not, my immediate response from dying was more on the lines of: “oh of course, I should’ve seen that.” The visual language of Somerville manages to strike an all-but-perfect balance in suggesting solutions and costly decisions, without slipping too far into insultingly obvious. Even at the point where one is certain the game is being too vague in its explanation, Somerville orchestrates with mostly enough confidence in its player for things to continue running at a brisk pace. I say nine times out of ten for a reason, for it’s disappointing that Jumpship leave it right to the very end of the game — where the player is properly given a choice on how to end things — where more clarity would’ve better served what feels like the only moment in the game with any weight to one’s actions. 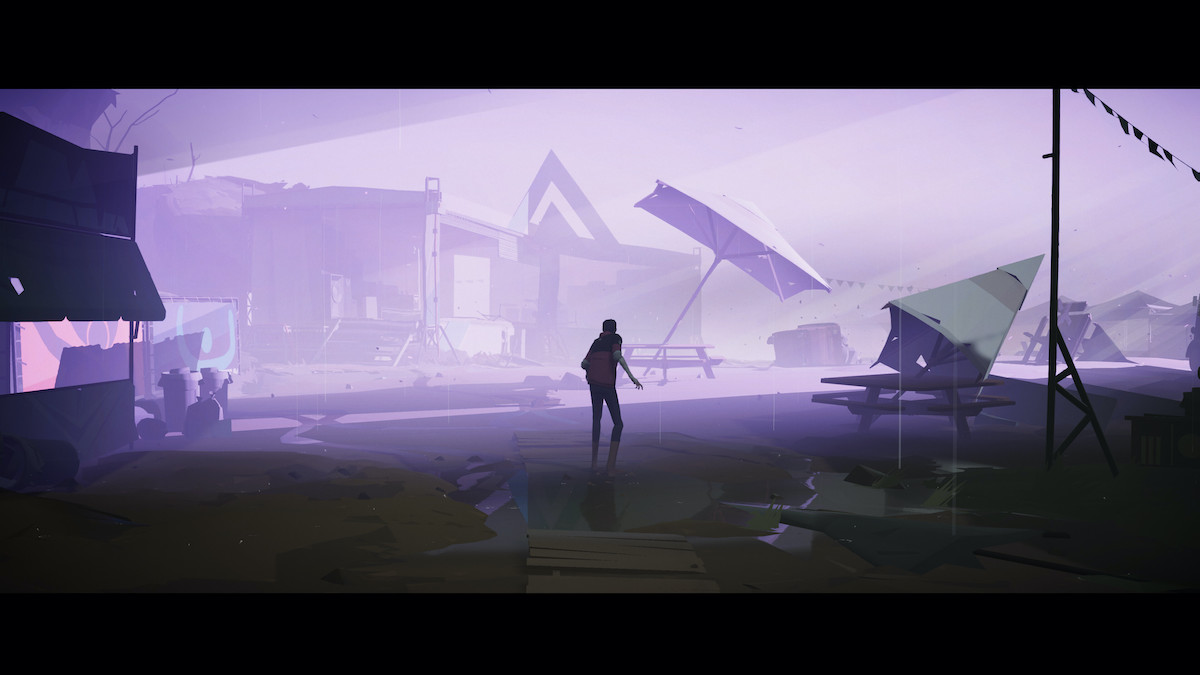 Aside from its flawed ending, the only other real conceit to Somerville’s puzzles are that the depth of complexity can feel limited, just when the mechanics themselves start to show promise. Not least, again, in the final couple or so sections where Somerville seems to be at its most suggestive that the puzzle design — on top of its scene setting — is starting to get more adventurous. One example that has you pointing and transmitting a light source via a camera feels more like a one-time gimmick rather than some first step towards more evolutionary conundrums. Another near the end, which involves a “loop” of sort, again should be the first stage in something more, but is so quickly tossed aside in favor of the spectacle. Not to say the spectacle — and ways in which Somerville encompasses a more cinematographic love for camera angles and perspective — doesn’t throw up a neat visual or two along the way. The late stage segments involving flurries of color and geometric shapes are a nice consolation to what amounts to holding down a couple of buttons for a brief while. And while puzzles do encompass more “steps” so to speak — the core mechanic of Somerville involving the manipulation of matter and converting/reverting a specific type from one state to another — the process can still be simplified to that of mere item pushing and switching a machine between two binary choices. Satisfying these sequences still are upon finally working out the correct order. Not least when you know a costly death is lurking somewhere amidst. Capped off overall with a pacing that provides a steady incline of difficulty as the game progresses.

A pace too that finds one snaking in, out, around and through environments that in Somerville feel a touch more diorama-like in their orchestration compared to the purely linear movement of Limbo and Inside. Camera angles, to refer back to the previous point, shifting from one style and intention to another. At times sticking to the side-on perspective, but other times winding around and even focusing in at ground-level. It’s not entirely a “one-take”-esque form of capture, but it’s clear Somerville is trying its best to fight back the implications that its pseudo-3D world is little more than another side-scrolling endeavor. How it plays with that conceit of a 2.5D style of traversal in making its world feel far more grandiose and expanded. A personal disappointment this may be, it’s a shame that the game’s implying of a large world and large ramifications doesn’t necessarily translate to more 3D-like exploration. Another early sequence seeming to initially suggest movement is about to broaden to locales on the horizon, but is just-as-quickly met by invisible walls and the reminder Somerville is still primarily linear in its structure and its main progression, multiple-choice ending aside. 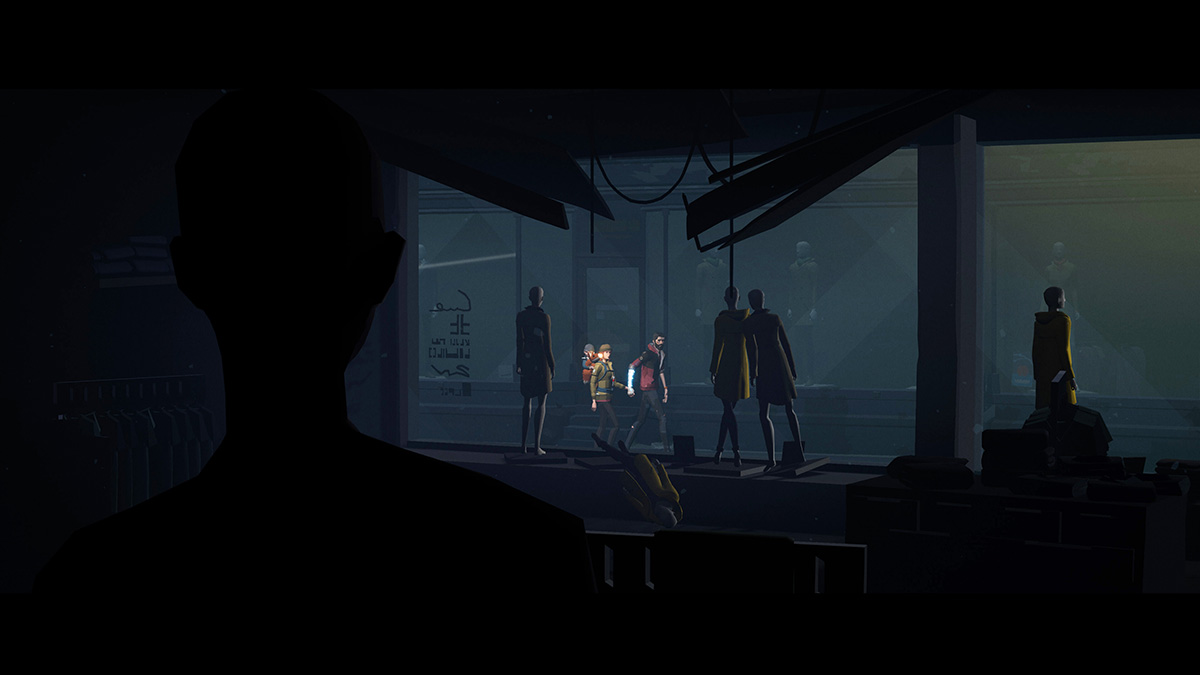 It’s hard to recommend Somerville purely on the basis of what loosely-tied and ultimately lacking material its narrative provides. A story, so to speak, devoid of a satisfying conclusion (not least if you’re going for all possible endings) wherein the vague explanation throughout doesn’t always work in its favor. Having said that, the same hands-off approach to its puzzle design does provide more than enough positives to render the game an enjoyable-enough trek. At least for those willing to toss such lacking explanation on its world to the side. Complimented by a style of presentation unafraid to shake up its framing from time to time, as well as respectable visual left-turns along the way. Somerville may lack the foundation or staying power to justify its narrative’s more personal but muddled intent, but its gameplay and philosophy on letting players figure things out for their own still wins out overall.