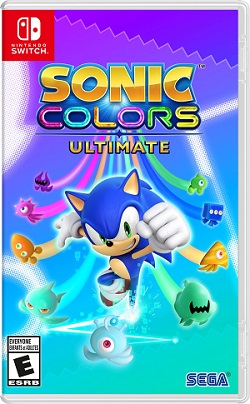 The past two decades have not been kind to Sonic the Hedgehog. After 2006’s bungled reboot, Sonic Team struggled to land on a consistent vision for Sonic, releasing game-after-game with wildly different concepts. Often, those concepts didn’t translate to successful game mechanics, forcing the team back to the drawing board for the next title. Every now and again, however, the team would pump out a gem. Such was the case with 2010s Sonic Colors, which blended 3D platforming, inventive levels and flashy alien-powered abilities to create something special. Previously exclusive to the Wii, developer Blind Squirrel Games has modernized this title for current platforms. Remastered as Sonic Colors: Ultimate, does the game hold up all these years later or was it merely a fluke?

Sonic Colors: Ultimate covers the same story beats as the 2010 original. Sonic and Tails travel to an interstellar amusement park constructed by Dr. ‘Eggman’ Robotnik, who is harnessing the power of alien creatures called Wisps to power his latest evil invention. To put down Eggman’s nefarious schemes once again and save the Wisps, Sonic will need to travel around the amusement park’s different worlds and destroy their generators.

Sonic Colors wisely shed the overly-serious tone of Sonic ’06 and Sonic Unleashed in favor of a more lighthearted adventure. Sonic Colors feels akin to a playable cartoon that anyone can pick up and enjoy, filled with fourth-wall-breaking and slapstick humor. The story isn’t overbearing, and the voice acting was and remains leagues better than the Sonic games previously released. As the first time PlayStation, Xbox and PC players get to experience Sonic Colors, it’s a fun tale to run through. There may be nothing new here for those who did experience the game on Wii, but it’s still an enjoyable romp. 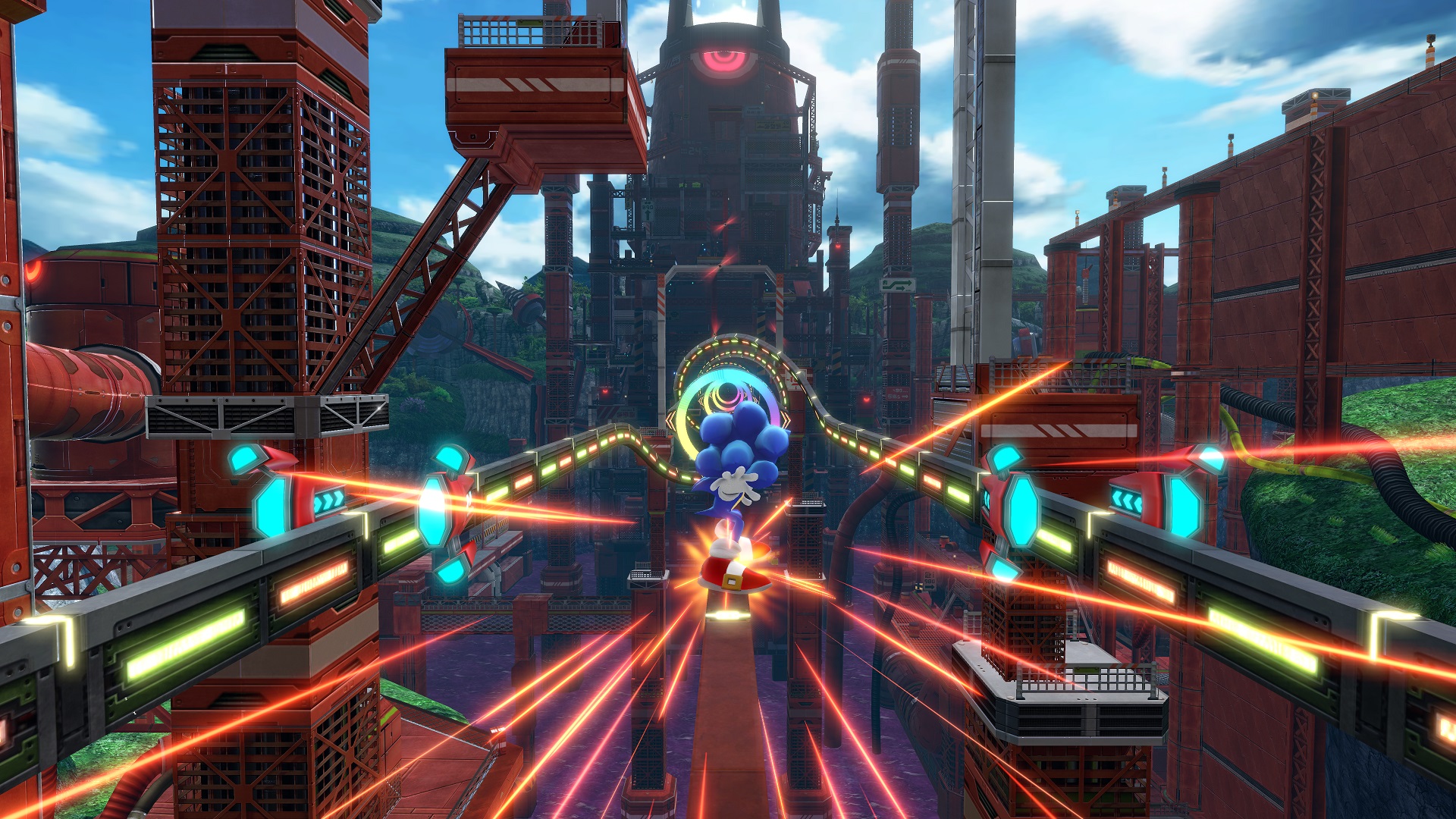 Sonic Colors: Ultimate takes players across the same six themed worlds of the original. You’ll race up the delicious-looking Sweet Mountain, sink to the depths in Aquarium Park and speed through space debris in Asteroid Coaster. They’re all highly-inventive locations that, even eleven years later, still feel as fresh and fun to explore. Each world has seven levels that usually take about a few minutes to complete. What helps Sonic Colors stand out from other entries is the vast amount of replayability baked into each level, thanks to the Wisps.

The Wisps of Sonic Colors transform Sonic and imbue him with unique powers. For example, the Cyan Wisp turns Sonic into a laser, allowing him to zip across the stage at lightning speed and take out enemies in his path. Meanwhile, the Pink Wisp turns Sonic into a spike that can roll across surfaces, including walls and ceilings. All eight of the original Wisps return alongside a new yet familiar Wisp. The Jade Wisp from Sonic Team Racing has been incorporated into the game, allowing players to phase through solid objects. It’s a fun new addition, and some retooled levels that take advantage of Jade add something new to the remaster. The game actively encourages you to unlock the Wisps and return to older levels to explore them further.

Even with the uniqueness of the Wisps, the core meat and potatoes of Sonic Colors: Ultimate’s gameplay remains focused on speed and platforming. As Sonic, you’ll race across 3D and side-scrolling 2D levels, double-jump across platforms and destroy enemies at immense speeds. Sonic Colors: Ultimate’s gameplay loop is mostly satisfying, providing plenty of thrills thanks to the fast speeds. The loop falls apart only when Sonic slows down, which unfortunately happens a handful of times. 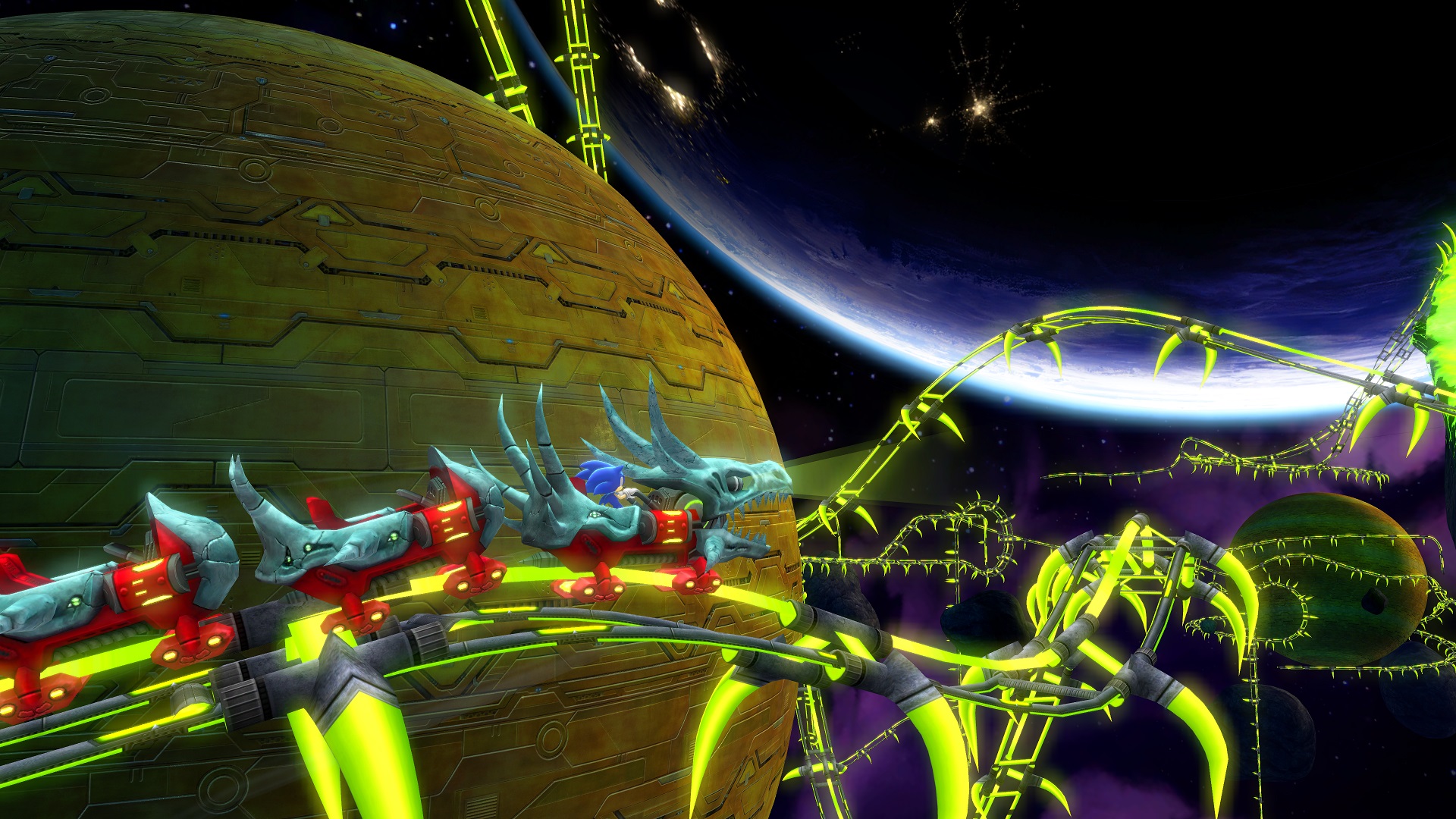 As a remaster, Sonic Colors: Ultimate adapts to new platforms well. It features refined controls that map well to modern controllers. It’s a fluid system and the additional refinements take out some of the floaty frustrations leveled at the Wii controls. That being said, the game has a handful of frustrating levels that slow Sonic down and force players to complete precise platforming upwards that can be painful. Combined with many world’s love for bottomless pits, some of these sections feel more painful than they should. The new Tails Save mechanic does alleviate some of that frustration, but is contingent on you having a Tails Save token. Sonic Colors: Ultimate, and Sonic the Hedgehog in general, is best when Sonic moves forward. Unfortunately, when it comes to precision platforming, that’s where he gets into trouble.

Sonic Colors: Ultimate brings a bevy of additional features to customize and enhance the experience. Collecting Park Tokens in the main game allows players to unlock different boosts, auras, shoes and gloves to customize their Sonic. A new ‘Rival Rush’ mode has also been developed, letting players race against Metal Sonic to unlock additional rewards. Finally, the original two-player co-op returns but is completely untouched from the initial release. It remains unenjoyable when playing co-op, though you can find some fun tackling them solo. 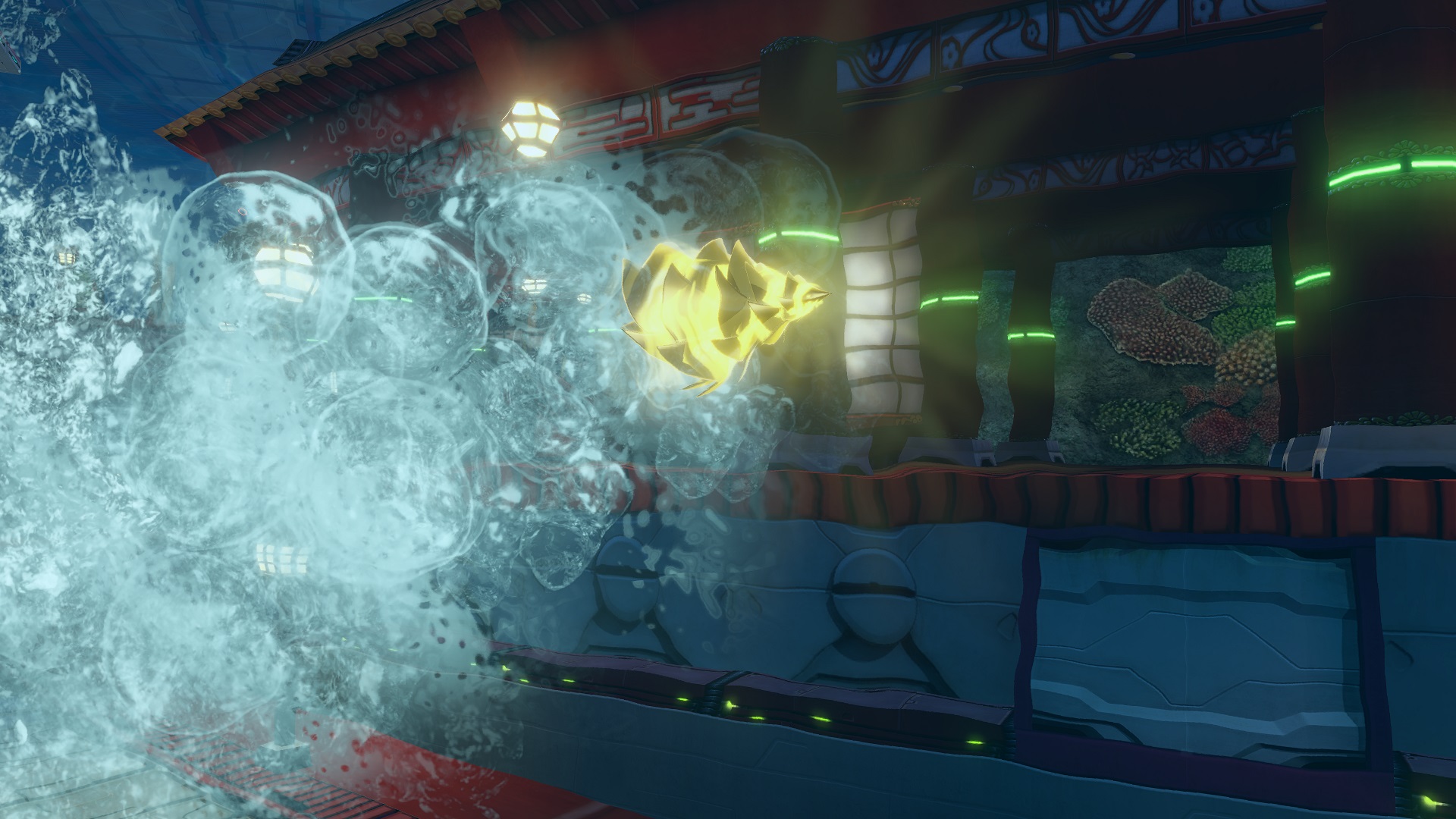 Sonic Colors: Ultimate feels at home on last-generation consoles thanks to a gorgeous presentation that highlights the use of color. The enhanced visuals, upgraded textures and reworked lighting all come together to deliver a presentation on par with recent Sonic titles. Even the soundtrack has been remixed with great earworms playing as you tear through Eggman’s plans. Additionally, when playing on an enhanced console (PS4 Pro or Xbox One X) or current-gen console via backwards compatibility (PS5 or Xbox Series X|S), you’ll get to experience the game in 4K running at 60fps.

Sonic Colors: Ultimate is a great-looking and sounding remaster when in action. Unfortunately, some of that sheen disappears when watching the pre-rendered cutscenes. Blurry and lacking the vibrant colors found during gameplay, the cutscenes are rough to watch and diminish what is a beautiful game. It’s unfortunate Blind Squirrel Games were not able to get these scenes up to current standards, something they’ve successfully done with the rest of the game. 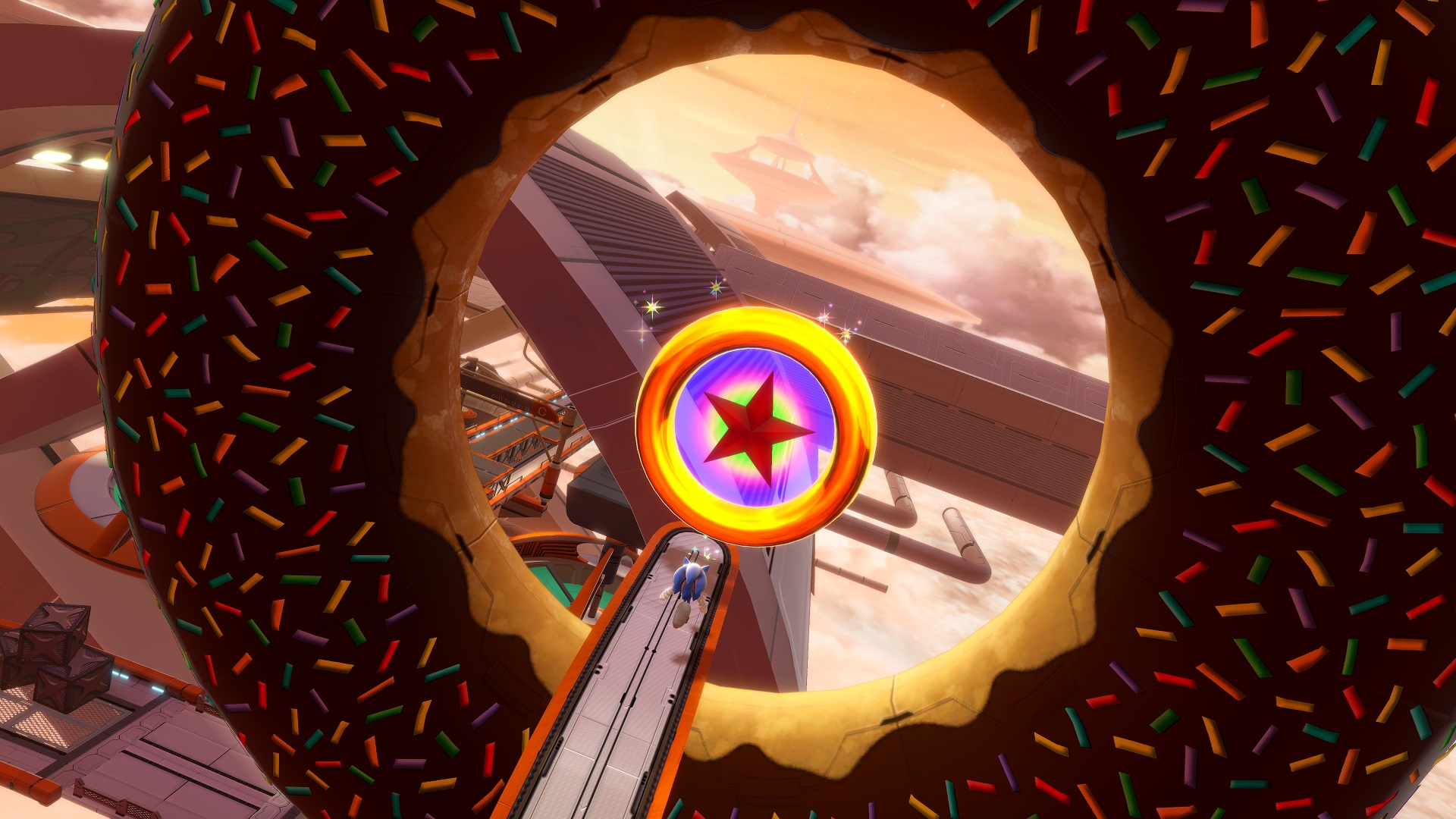 Sonic Colors’ vibrant colors, inventive level design and fast gameplay made it a hit back in 2010. Sonic Colors: Ultimate recaptures the magic, making refinements and upgrades to the gameplay and visuals to bring them more in line with today’s standards. The level design and Wisps provide plenty of replayability, while the fast nature of the platforming makes zipping through them a thrill. It’s not a perfect remaster considering some elements are left untouched (the co-op and cutscenes). The refined controls make controlling Sonic’s forward momentum feel great, but the game drags anytime he slows down and is forced to platform up. Sonic Colors: Ultimate may not bring much new to the table for returning players, but it does do a good job bringing one of the best Sonic games in the past two decades to more players than ever before.