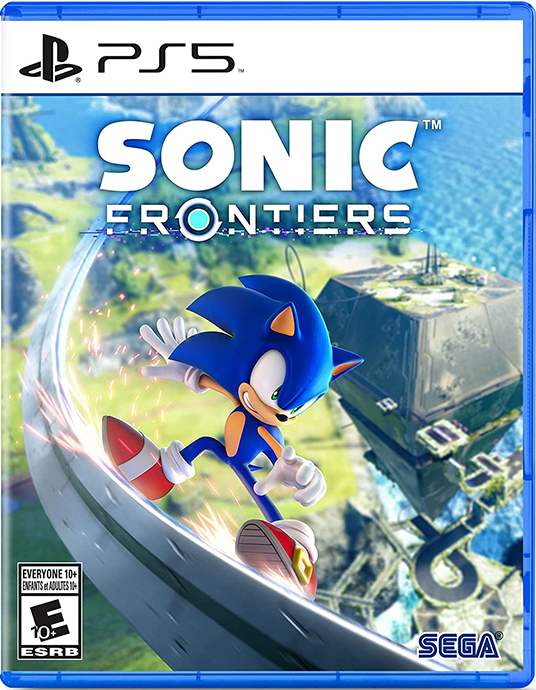 Few long-running series have had as many ups and downs as Sonic the Hedgehog.  The 16-bit days were nothing but classics, the Sonic Adventure games were decent but victims of trying to figure out how to make the gameplay work in 3D, and then there was the long, slow parade of titles ranging between decent and terrible.  A couple of the Game Boy Advance titles were solid, and Sonic & All-Stars Racing Transformed turned out to be one of the best kart racers ever made, but it wasn’t until the throwback Sonic Mania that one of the core games managed to get back to the quality of the series’ early years.  It’s hard to get the speed of Sonic to work outside of his 2D origins, but with Sonic Frontiers Sega is taking its mascot in a new open-world direction that, despite a few rough edges, is easily the best Sonic has ever been in 3D.

There’s not much of a plot to begin with.  Doctor Eggman attaches a device to a strange monument which promptly drags him in.  Sonic and Amy are flying along with Tails in his biplane, heading to the Starfall Islands to retrieve the chaos emeralds, when they get dragged into a portal.  After a quick forward-scrolling level Sonic wakes up alone at the foot of a monument identical to the one Eggman was messing with.  A mysterious voice from the air lets Sonic know he escaped Cyber Space under his own power, and that makes him the key.  This is all observed by a strange figure in red, and while none of it makes any sense at all, that’s perfectly OK for the moment.  There’s a whole giant unmapped island ahead of Sonic just waiting for exploration, and the explanation for whatever it is that’s going on is bound to be out there somewhere.  To find it, though, Sonic will need to pay attention, and that’s hard to do when the whole world is a massive playground.

Everywhere you look there’s a distraction, whether that be a stray bumper, acceleration pad or set of rails just waiting to send Sonic flying across the landscape.  The first island area’s diversions are maybe too simple, practically taking care of themselves while only requiring a few taps of the auto-homing dash to zip towards the next target along the way, but later islands add nice complexity with alternate routes and hazards.  These mini-courses take place in the open world but play like 2.5D platforming sections, with the camera frequently locked and Sonic unable to break out of the plane, but they tend to be short and are also a fun spectacle so it rarely feels like control is taken away.  It’s possible to get accidentally railroaded into these sections, though, which can become annoying when you’re chasing after the next major open-world goal. 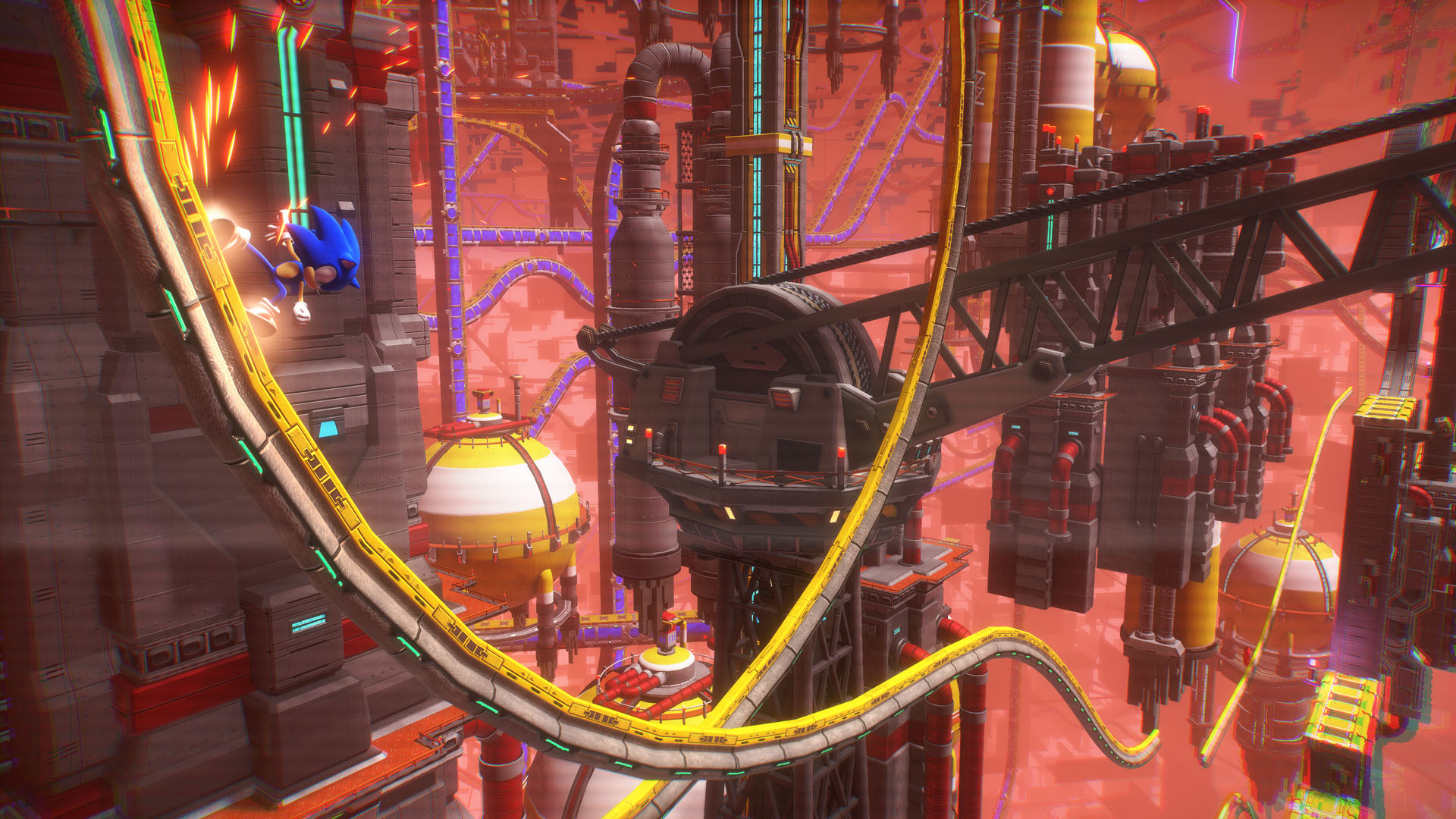 Most of the time you’ll want to be finding as many of these sections as possible, not just because they can be all kinds of entertaining, but completing them rewards a memory token.  Amy, Tails and for some reason Knuckles are all trapped in Cyber Space and only exist in the world as glitchy projections.  Talking to them requires a payment of memory tokens, as does any conversation with the mysterious figure in red, who turns out to be fighting Sonic’s progress but also willing to chat now and then.  It’s worth noting here that the voice acting for everyone is excellent, and that somehow includes Eggman.  It’s amazing how much more of a reward a cutscene can be when it’s voiced in conversational tones and is short enough to be a treat rather than an interruption.

As Sonic earns memory tokens and starts learning more about the islands the overall flow of each area comes into focus.  Small and easy challenge areas require searching but reveal the map when completed, including icons for points of interest and all challenge medals.  Cute little stone inhabitants called koco are kicking around the ruins, and bringing them back to the Elder Koco lets Sonic level up maximum ring capacity and top speed, although for some reason at a rate of one slow, plodding point at a time.  Each island also has an epic titan guardian that can only be defeated by transforming into Super Sonic after collecting all seven chaos emeralds, a couple of which are earned by completing missions for Amy, Knuckles and Tails that reveal island history on completion, but most of which come from unlocking a container-monument with collected vault keys. 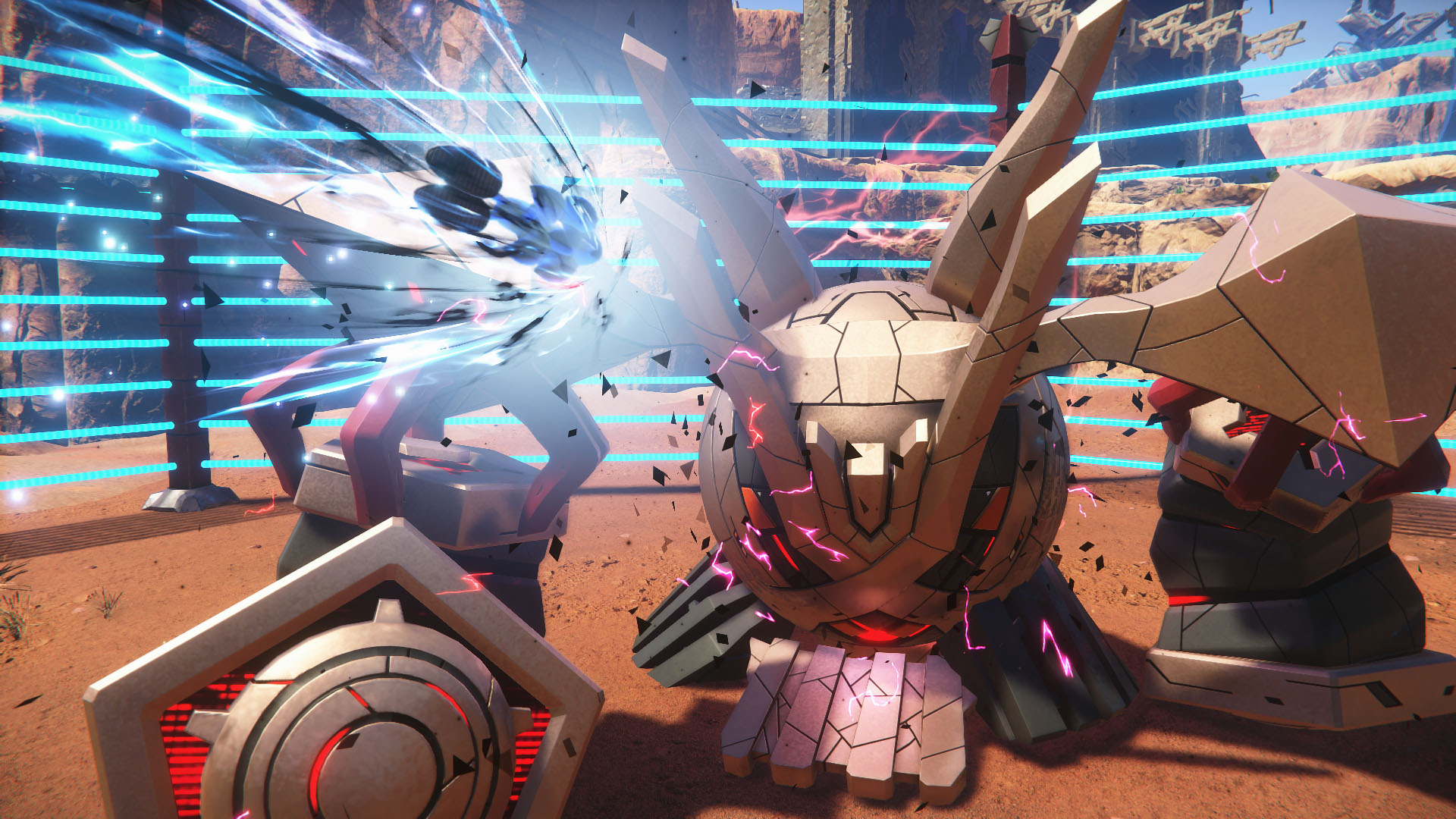 Vault keys can be found around the islands, but most are gotten from monuments like the ones that Sonic and Doctor Eggman encountered at the start of the game.  Each monument is a gate back to Cyber Space, which contains a large focused course that’s a tribute to earlier Sonic games.  Some levels are side-view, others forward-scrolling like the Wii games, and all of them have four goals to chase after: beat the level, collect five red star emblems, beat the level with a certain number of rings, and complete with an S-ranking for time.  That last one is the one that will require the most replays, but there’s a comfortable buffer once you’re familiar with the course that will see the S-rank fall with anywhere between five to twenty or more seconds to spare.  The vault key levels make a great change from open-world exploration, and the two types of gameplay perfectly complement each other.

The final aspect of Sonic Frontiers is its combat, and while a few enemies do go down with a simple homing-strike like normal, there are plenty of challenges roaming the fields that require full use of Sonic’s move-set.  Sonic’s basic attack has a good range and auto-locks on the nearest enemy, and the first couple robo-critters go down easy with a few strikes, but there’s a reason you can access a tutorial with the press of the directional pad.  Dodge, parry, dodge-kick and several types of range attack are all available, and working up the combo meter enables more powerful strikes once Sonic has earned them.  With a little practice most enemies go down easily, and you can bust out good combos with basic button-mashing, but using everything knowing what it does makes fights much more fun and varied.

There’s a lot more to Sonic Frontiers, such as using the cyloop to trace patterns on the ground or collecting power and defense items to cash in at Hermit Koco (who’s different from Elder Koco and much quicker on handing out the upgrades), and it does feel like Sonic Team put in everything they could think of and then a few more ideas for good measure.  The problem is that the game frequently comes across as too ambitious, with controls that work great in one style of gameplay inconsistently failing in others.  A prime example of this would be the dash move, which gives Sonic an intense burst of speed for a second before settling down to a high sprint.  This can be done both on the ground and in air, and is essential for some of the platforming challenges.  The problem is it frequently feels arbitrarily powerful, with a dash in the open-world sections being just right and yet highly overpowered for some platforming areas where it seems like it should have worked.  It doesn’t help that the dash is fired off with an analog trigger yet has no analog functionality, so you can’t just step on the gas a little for precision platforming.  Air control can feel equally inconsistent, with the ability to move feeling good in most areas except when it’s needed in the platforming.  It’s not that any section is made impossible by the controls sometimes feeling wonky, but some are made to be played in a specific way and you’ll be repeating them several times until figuring out that what feels like it should work simply won’t. 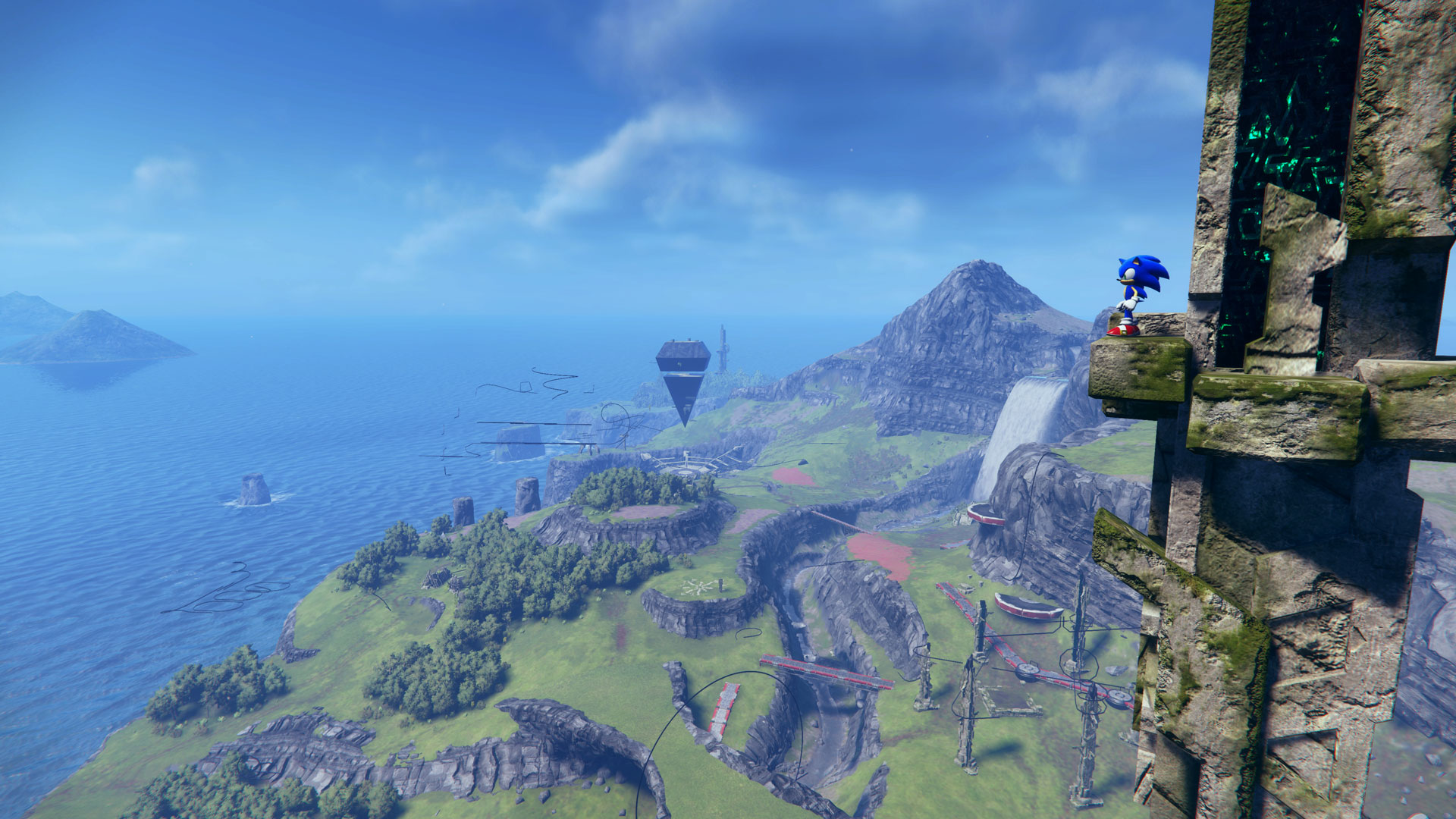 Sonic Frontiers is a hugely ambitious new direction for the series that comes close to hitting on all cylinders.  The different islands are all expansive with a ton of places to explore and routes to get there, some less obvious than others.  It feels weird to appreciate the story in a Sonic game, but this one is well presented with excellent voice acting that sells the dialogue, and the music can stand with the best of the series.  Even though the controls can sometimes feel frustrating in the 2.5D sections, it’s never enough to kill the momentum, and when you finally dial in to what’s expected the area is cleared and it’s back to the exploration.  There’s a mystery at the heart of the Starfall Islands and it’s got Sonic’s friends trapped within, but a cocky and determined hedgehog is more than a match for whatever may be happening there.  But first there are a couple hundred areas of the map to explore, tricky routes leading to memory tokens, enemies and mini-bosses to test new combat skills on, and maybe a few koco to rescue.  Whatever happened on the Starfall Islands seems to have taken place centuries ago, so it can wait just a bit longer for Sonic to bounce, dash and rail-grind his way through every challenge Sonic Frontiers can throw at him.