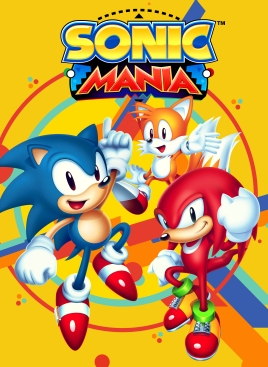 In 2014, we were introduced to Shovel Knight. Yacht Club’s ode to the eight-bit days of Mega Man and the like ended up being an absolutely superb platformer with a terrific cast and rock-solid gameplay that had just the right level of difficulty. It perfectly captured the feeling of older titles before it, and basically winded up as the best NES game never made. Last year, we got Owlboy. D-Pad Studios had created a visually stunning platformer evoking the sixteen-bit era with an amazing and emotional story, along with a terrific variety of gameplay and a great use of a metroidvania setup. It ended up being our Game of the Year, and basically wound up as the best Super Nintendo game never made.

So here we are, in 2017, being introduced to Sonic Mania. Intended as a celebration of Sonic the Hedgehog’s twenty-fifth birthday, Sega has teamed up with indie and fan game developers Christian Whitehead, Headcannon, and PagodaWest Games to deliver a retro side-scrolling platformer that returns the blue blur to his roots. It mixes together elements and levels both old and new to create a modern entry in the Sonic franchise that would actually pretend like the sixteen-bit era never ended, as if it was a direct sequel still released on the Genesis/Mega Drive.

What we’re asking is…can we go three for three?

Things start off promising once you start the game and are greeted with the familiar “SE-GA” intro, which alone fills you with glee and lets you know how committed the developers are toward capturing that mid-’90s feel. After selecting your character(s) and jumping into the game proper, you’re given a dialogue-free cinematic setting the stage for this new adventure. Doctor Eggman has uncovered a mysterious new gem with the help of his latest robotic creations, the Hard-Boiled Heavies, and apparently it contains a mysterious energy that seemingly has the power to alter reality. Thus, Eggman is provided with a new way to conquer the world, or least that’s what’s suggested, seeing as how you don’t have an instruction manual to clarify things this time around. 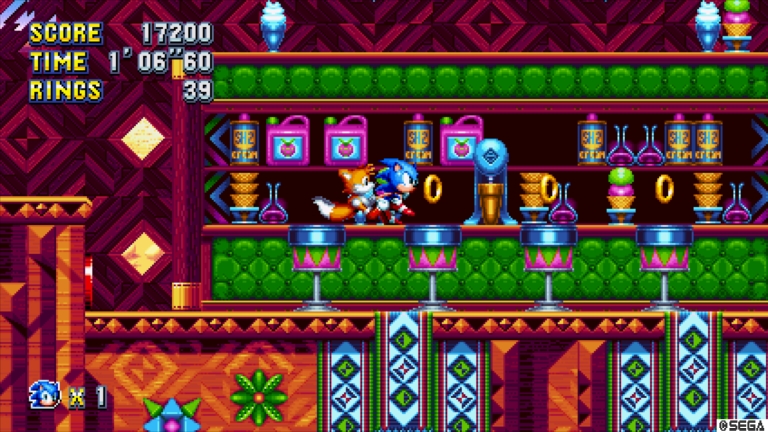 Sonic now finds himself being warped between a variety of different zones that he has to journey through in order to take down Eggman, spanning familiar locations and a crop of new ones as well. We’re dealing with a variety of levels spanning across all the sixteen-bit games and then some, and what astounding levels these are. The older levels have been “remixed” to include new touches in all areas, ranging from new enemies and visuals to gameplay twists. This includes Stardust Speedway where you grow platforms with carnivorous plants on them, or an Oil Ocean with smog that builds up, obstructing your vision and sapping away rings. These remixes do the original levels justice while making them feel fresh, making sure to allow for fast-paced gameplay while giving you plenty of routes to take and loads of secrets to hunt for.

Then you come across the new zones in Sonic Mania such as Studiopolis, Press Garden, and Mirage Saloon, and this is where the level designs will blow you away even further. The developers take even further advantage of the “hi-bit” movement among pixel art games such as the aforementioned Owlboy, resulting in not just stages with perfect layouts and paths to traverse, but ones that are absolutely drop-dead gorgeous. The remixed levels are given the hi-bit touch as well, but it’s in the newer worlds where creativity shines. Sonic finds himself spinning through lottery machines, shot out of giant Wild West pistols, and more, accompanied by by an eye-popping spread of vibrant colors and oodles of detail in every corner, down to each falling leaf and dizzying barstool. If you prefer the old-school touch, why not some CRT filters to add to the experience? 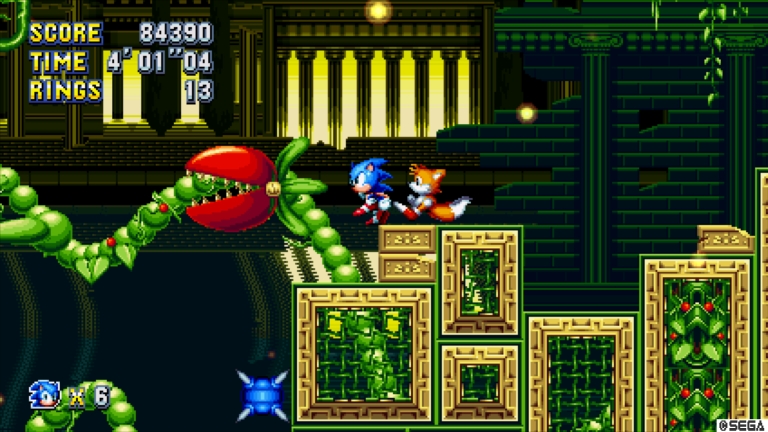 Accompanying this terrific level design are the bosses and mid-bosses at the end of each act. These alone deserve special attention because they are incredible. Sometimes it’s just a case of having impressive visual design again, like with the Hard-Boiled Heavies, and how they manage to be a bunch of cute threats that each show off a nice amount of personality, but then there’s simply just the manner of how they play out. They each put out a variety of challenge, ranging from simple to tricky that manages to maintain a perfect level of difficulty. I wish I could go into more detail, but I don’t want to spoil anything; you just need to see them with your own eyes. Long story short, Nioh and NieR: Automata have major competition when it comes to the year’s best boss battles.

As for the gameplay, it’s still as simple and excellent as it was in 1994. All you need is a d-pad and one button, and you’re off jumping, running, and spin dashing like it was just yesterday, with the speedier sections being an absolute blast, unsurprisingly. The power-ups haven’t exactly changed much, although we do get a new form of insurance that causes any rings you lose to become larger and easier to retrieve at once, which is a nice touch. Sonic Mania also brings back the UFO chases from Sonic CD for Special Stages where you collect chaos emeralds, now enhanced to have primitive, yet beautiful 3D graphics and Mach levels that allow for more speed and intensity. This is in addition to the classic Sonic the Hedgehog 3 stages where you collect blue spheres as the checkpoint-triggered bonus levels. Both are still incredibly fun to play and control nicely, the UFO chases moreso. 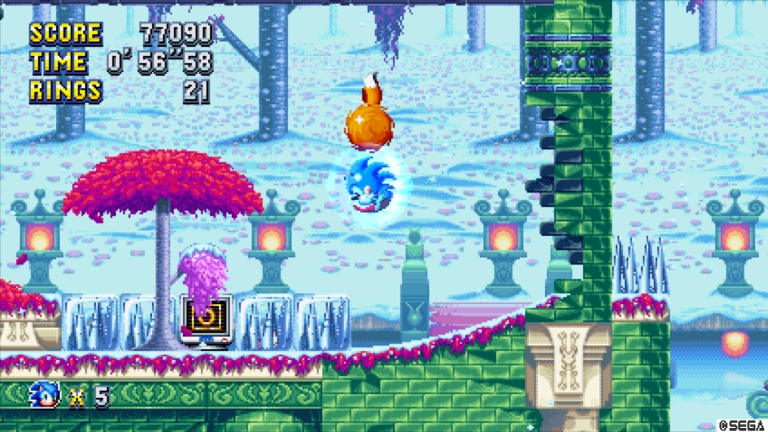 As expected, these stages are your key to unlocking the secrets of Sonic Mania, be they the Chaos Emeralds to get the best ending possible, or the gold and silver medallions gathered from successfully collecting spheres. There are quite a few extras to discover as you progress, such as allowing you to change Sonic’s move set to that of one from a prior game, letting him have the likes of Super Peel Outs and insta-shields. So on top of having some fast yet large levels, there is a ton of replayability to find here. And before going any further, we may as well acknowledge the music, which between the jams for the new zones and the old ones, are still as energetic and toe-tapping as they’ve ever been, encouraging you to still be as speedy as you can.

But is Sonic Mania flawed in any ways? Well, you could easily argue that the new level designs are almost too good. As mentioned, all the levels are incredible in their own ways, but the ones created specifically for this game especially stand out in contrast to some of the others, especially since we have four compared to eight remixed older levels. It kind of creates a slight comedown when you leave the likes of Studiopolis struck with awe, only to see the familiar opening screen to Flying Battery. Of course, then you quickly hit all the twists the remix delivers, and the comedown quickly goes away. Still, here’s hoping Christian and company get hired for a sequel that has one hundred percent brand new zones. 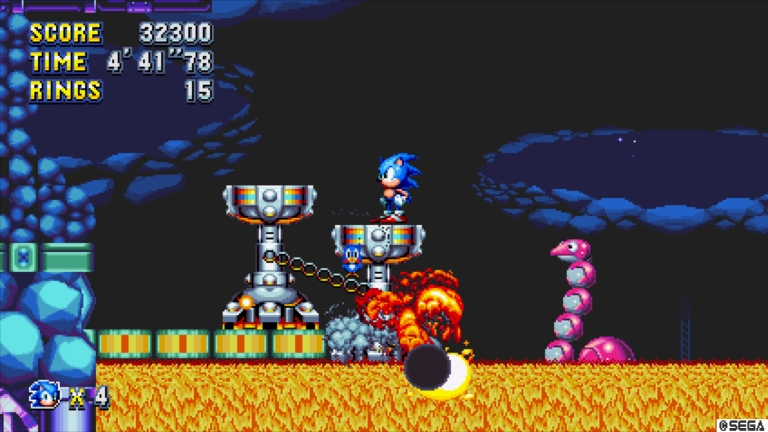 Then again, “the really good stuff slightly pales in comparison to the really, really good stuff” isn’t really much of a complaint, so we will say that the bonus levels and special stages have their own issues surrounding them. Sure, they’re as terrific as the classics, but but it’s how you access them that gets slightly iffy. For one thing, Sonic Mania does feel like it slightly overdosed on the “blue spheres” levels. That may be because you only need twenty-five rings to trigger the entrance to one at a checkpoint, and the way the checkpoints are placed, it isn’t uncommon to play about four or five of them per act. Sure, you don’t have to play them, but it still means that they run the risk of being repetitive (especially if you’re sill stuck on some).

As for the special stages, they have the opposite problem, at least in the first go around. Not only are they hidden and less numerous, requiring careful exploration to discover, but once you finish one – win or lose – it’s gone for the rest of the game. Even if you die and restart the level, all you’ll see is a wireframe ring the next time around. This annoyance is lessened once you complete the game and the level select is unlocked, and yes, having to grab all the Chaos Emeralds in one go is more like the older games, but there’s a reason other modern retro platformers have abandoned bits like this.

Sonic Mania can also be slightly vague at times, particularly when it comes to certain abilities. You may be able to unlock the Super Peel Out move from Sonic CD, but unless you remember the game’s controls, you’re still going to have to look up the method to execute it. Plus there’s the “Cool” bonus earned at the end of each act, which contributes towards your high score. I never quite figured out exactly what you have to do or not do to earn it, so evidently I am not way past cool. 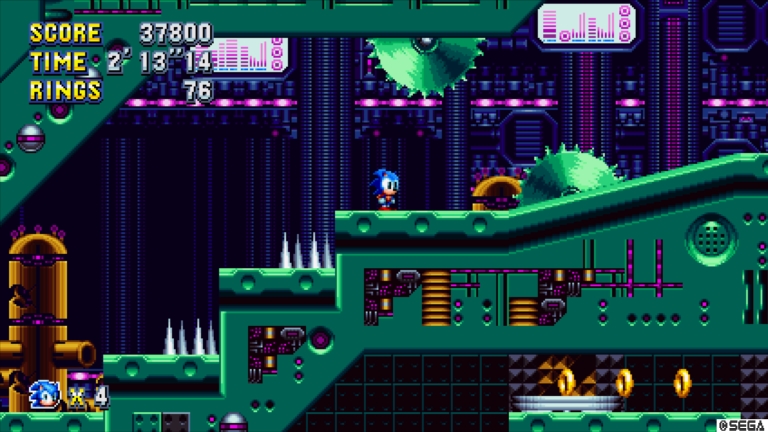 Sonic Mania is one of those games that your childhood has always dreamed of. One of the biggest icons in the industry gets the old-school game it deserves, a nice and lengthy throwback to Sonic’s glory days that’s still spiked with the kinds of creative juices to keep things fresh, even after twenty-five years. With adrenaline-fueled gameplay, jaw-dropping visuals, and massive levels that encourage exploration, this is an absolutely terrific platformer and a true gem that’s guaranteed to please fans and newcomers alike. So yes, add a third checkmark, because this may be the greatest Genesis game never made.