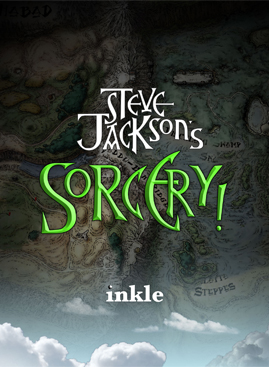 We make a big deal out of choice in our RPGs, but as technology advances and budgets inflate, it becomes harder and harder to create truly branching content. Every variation in dialogue or level layout needs modelling, sound design, and programming work to be made a reality, and all of those things are expensive and time consuming. Much as we might want our games to truly reflect our actions, it’s nearly impossible to justify creating what amounts to two or three separate AAA games worth of content in order to facilitate that. British developer Inkle has managed to solve this problem by ignoring it entirely: they make text adventures, and their latest game, Sorcery! 3: The Seven Serpents, puts nearly every big, complicated RPG on the market to shame.

Sorcery! is an epic fantasy adventure to rival The Lord of the Rings, Earthsea, and even A Song of Ice and Fire. The original series by Steve Jackson, on which Inkle’s games are based, has been unironically called “the Citizen Kane of Game Books,” and this adaptation manages to improve on it in every way. The series puts you in the shoes of a traveling hero known only as the Analander, who has been sent by the ruler of Analand to recover the mystical Crown of Kings that has been stolen by the wicked Archmage of Mampang. In your travels you face many dangers which you can circumvent by wit, stealth or brute force – or, if you want to have real fun, you can use magic.

To cast a spell in Sorcery! you need to invoke various constellations – each representing an arcane rune – in order to spell out magical words. Most of these are self-explanatory, and a few are fairly standard for an RPG – ZAP lets you hurl a lightning bolt, while HOT creates a fireball – but many are less conventional and open up a wide array of possibilities. For instance, JIG forces creatures to dance to an enchanted melody played on a bamboo flute, and SIX creates five clones of the caster that can be used to confound and attack foes. Some spells drain your stamina when used, while others require a magical focus like sand or the aforementioned flute to be effective. No spell is useless, and if you’re creative you can find a solution to any dilemma – often an amusing one at that. 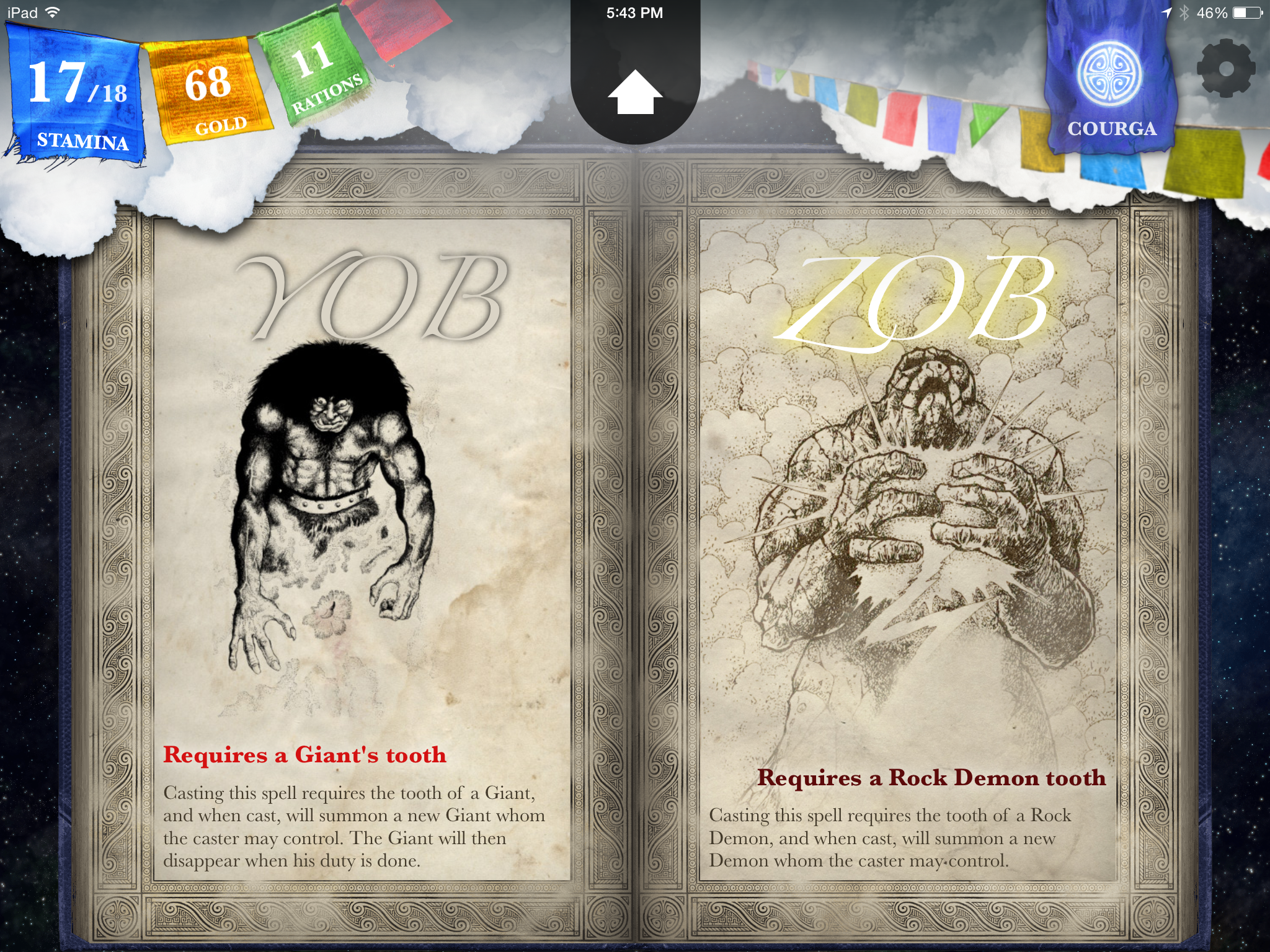 You can, of course, use good old-fashioned violence to solve problems as well, and Sorcery! has a very interesting combat system. Instead of rolling dice against stats like you would have in the original game book, you play a clever game of bluffing and feinting, adjusting the strength of your attacks so that you can overpower your opponents without expending too much energy and block their heaviest blows in turn. The system strips out conventions like menus and grid movement and strips combat down to its basest elements, making it a perfect fit for a story-driven mobile game. It’s nowhere near as fun as spellcasting, but swordfighting is enjoyable enough to be enjoyable for players who don’t want to be sorcerers.

Sorcery! 2 added another wrinkle to the gameplay: swindlestones, a minigame of bluffing and deceit where you wager on the rolls of several four-sided-dice, half in your hand and half in your opponent’s. Every time a player’s bluff is called they lose a die, and the first to lose their whole hand loses the game. It’s an interesting little game of chance, but it’s not particularly well-balanced. Because seeing  more dice than your opponent is a huge advantage, wins tend tos snowball. Were I to redesign Swindlestones I’d make it so that the winning player loses dice instead, which would create some much-needed rubber-banding, but I’m digressing. As a way to challenge the AI, the minigame works well enough, and figuring out the betting patterns of various NPCs is a funexercise on observation and inference. Cleverly, the game also ties dialogue to various bets (more incisive questions can only be asked with particularly bold wagers) so you can gather a lot of information at the risk of making a bad bet. Swindlestones returns in Sorcery! 3, though you will have less chances to play it out in the wilderness. 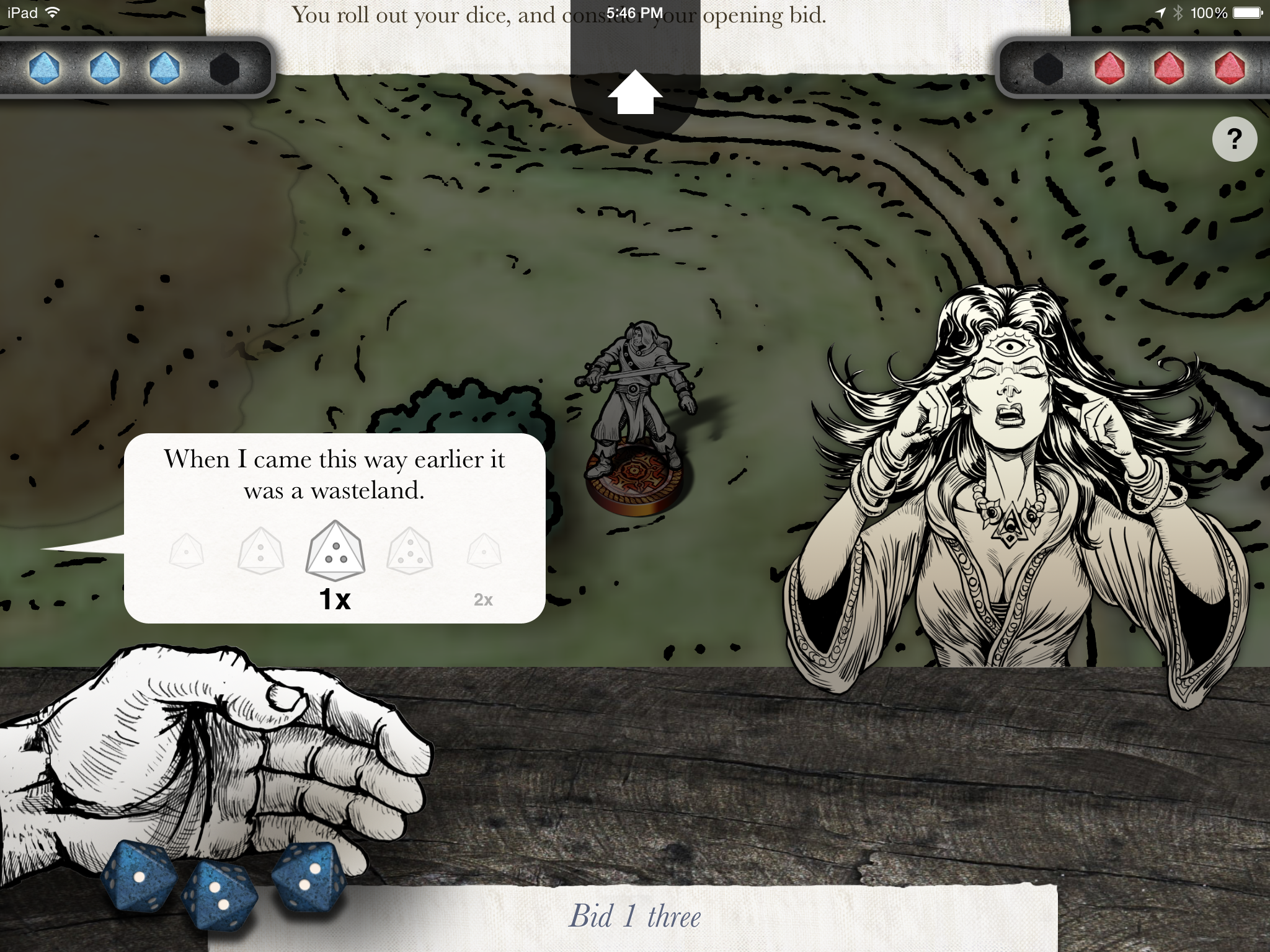 At the end of Sorcery! 2 you leave Khare, the Cityport of Traps, through its magical north gate. Depending on your actions and the path you take through the city it can be overthrown by an army of goblins or a militia of pirates and their werewolf slaves, or it can be left relatively unscathed as the two forces destroy each other. You can get out either by learning the magical spell to control the gate or by sneaking through as the goblin army surges in. Whatever choices you make, they will have drastic consequences for your journey ahead as you wander into the harsh and unforgiving paradise of the Baklands.

That last sentence may be a little confusing, so let me take a step back. As you enter the Baklands you see nothing but a desolate wasteland stretching for miles in every direction. All around are remnants of a lost civilization: ruined steps carved into a cliff face, a collapsed bridge stretched across a bone-dry ravine, and old stone towers ravaged by the ages. A letter from your king tells you that seven serpents, trusted servants of the evil Archmage, are racing across the land to the fortress of Mampang in order to warn him of your approach. You are instructed to find Shadrack, a hermit who lives in these wastes, and a face in the branches of a withered old tree points you in the direction of a cave to the east. 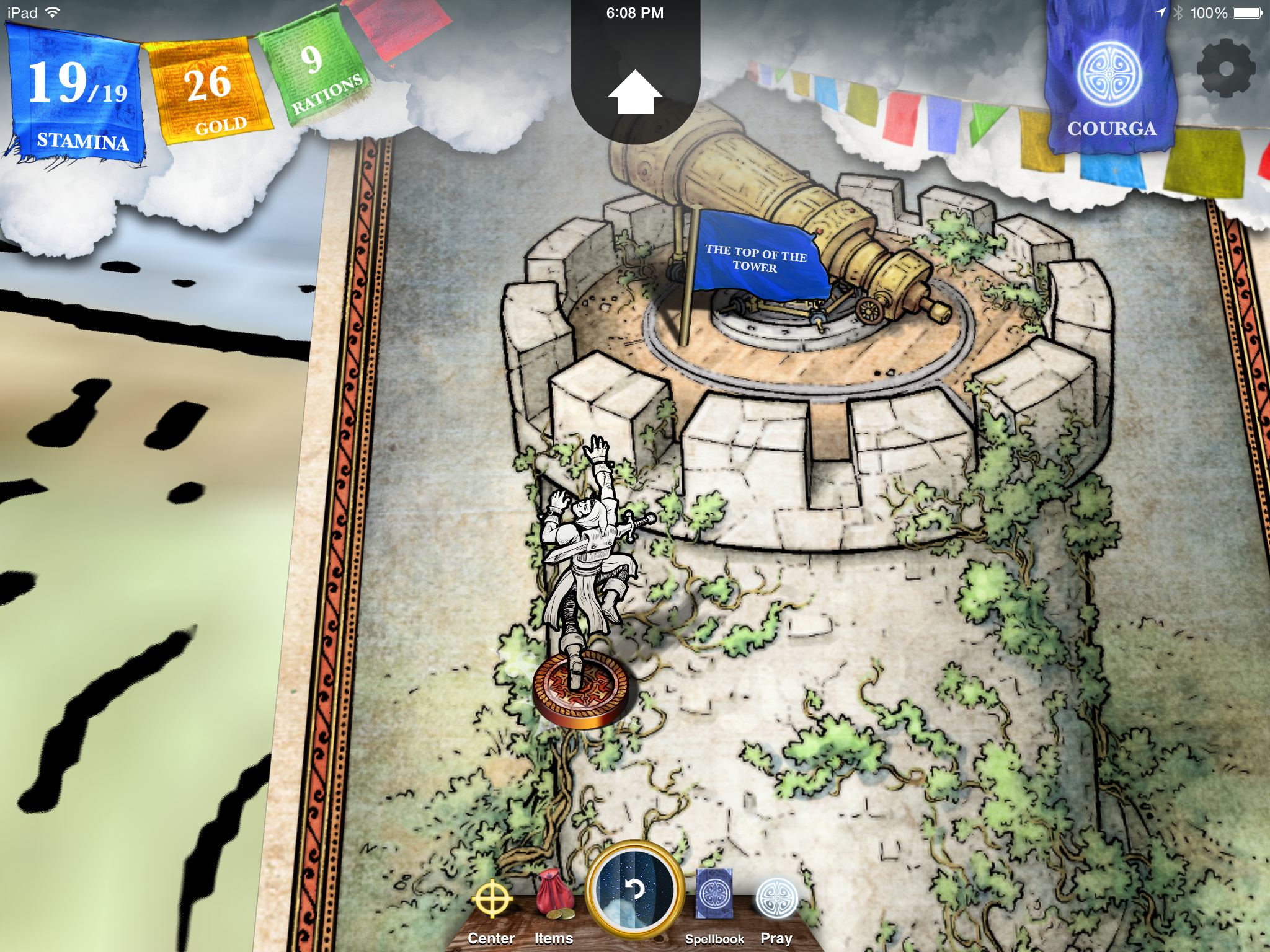 The cave is empty one moment, but the next a strange light descends upon the land. Suddenly, you are surrounded by lush, green fields, and in the cave you can see an old man cooking. He tells you that you are in Kariamma, a wonderful land of plenty, and that the ruined Baklands you know will not exist for another millennium – he also says that you will cause their destruction. At his advice you head north to one of the old towers, and at the top you discover a beacon that casts the same strange light – captured time, according to the hermit. Directing the beacon around the world map in full 3D, you cast its light on the ruined bridge to fix it (or rather to make it so that it was never ruined in the first place) and head further north, trying to find a way to Mampang.

Or maybe you don’t do any of that. Perhaps you ignore the old tree and the cave entirely and head east across the mountains. Perhaps along the way you meet an old witch who teaches you to counter magic spells, then you fight through barbarians in the Klatta-Bak steppes before a run-in with the time serpent – the embodiment of death itself – leads you to a different beacon entirely. Perhaps you make straight for the bridge instead and fall to your doom or get eaten by a horrible bug monster. Or maybe you die in a hundred other ways – from dwindling supplies or vicious traps – because this is the hardest game in the series by wide margin. From the second you enter the Baklands, the choice is entirely in your hands.  Whereas its two predecessors were made up of a series of linear branching paths, Sorcery! 3 is set in a full-fledged open world with a day/night cycle, resource management, AND time travel elements. The world is so large that it necessitates a fast-travel system between the beacons. 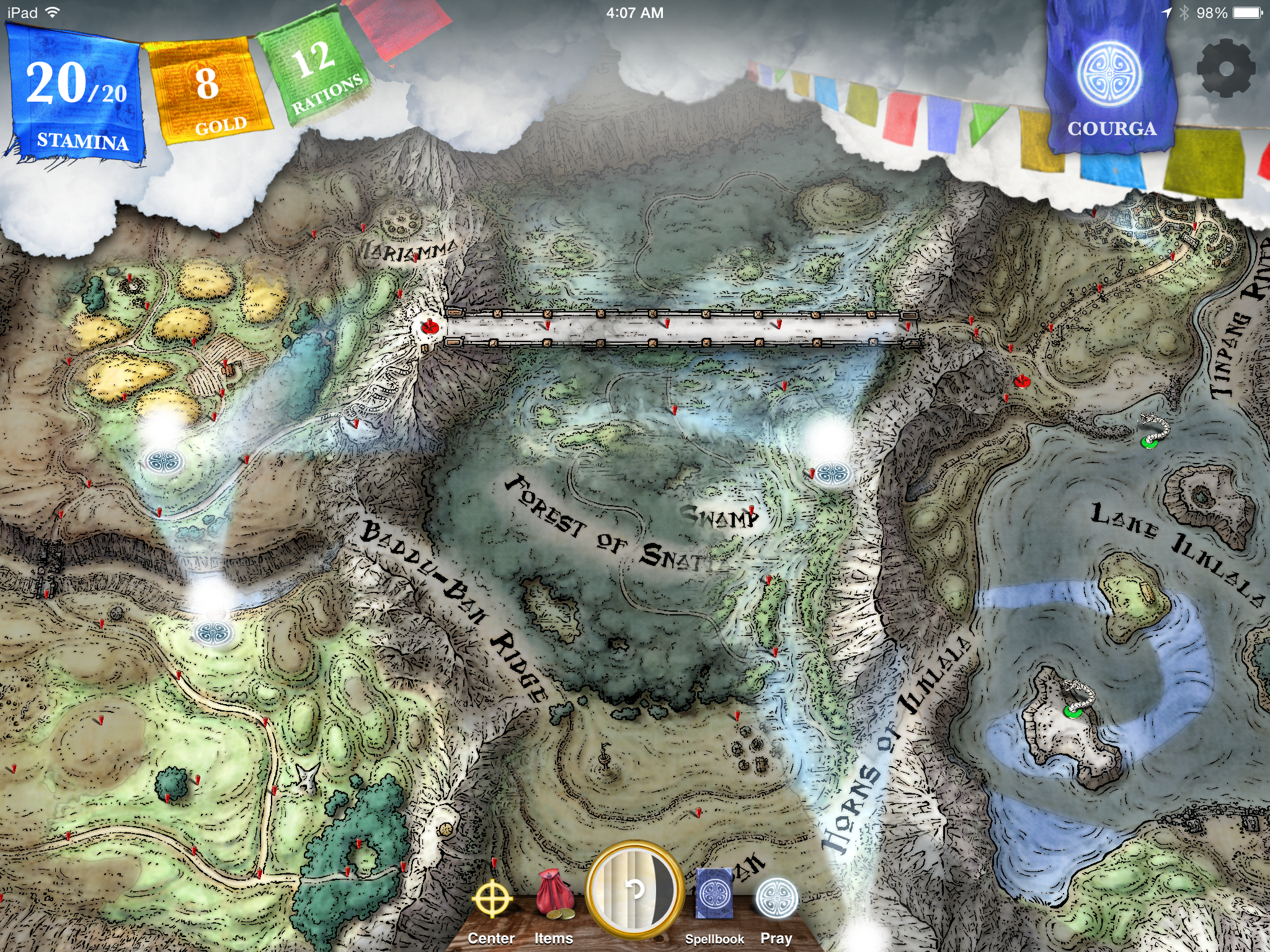 You will have to scour the entire map if you want to find and defeat all seven serpents, too. Each is a formidable foe with elemental powers far beyond anything you’ve fought up to this point, but they all have weaknesses that can be uncovered and exploited if you’re diligent in your research. Each serpent presents a different puzzle to solve that tests both your preparedness and your critical thinking skills. These are some of the most enjoyable bosses I’ve fought in any game, and the final encounter with the Time Serpent is positively ingenious – a drastic improvement over the simple puzzle from the game book.

Yet at heart this is still a text adventure, with prose that changes to reflect the time of day and your previous encounters and what items you’re carrying in your backpack. Within any given scene you’re likely to run through half a dozen interesting, meaningful choices, and across the hundreds of scenes in the game that really adds up. There must be thousands – maybe millions – of possible combinations of events and outcomes, but no matter what happens the story is cohesive and sensible and exceptionally well-written, inspiring chilled awe one minute and warm laughter the next. Impressively, there are only a handful of typos and grammatical errors in a script that must have been an editing nightmare. 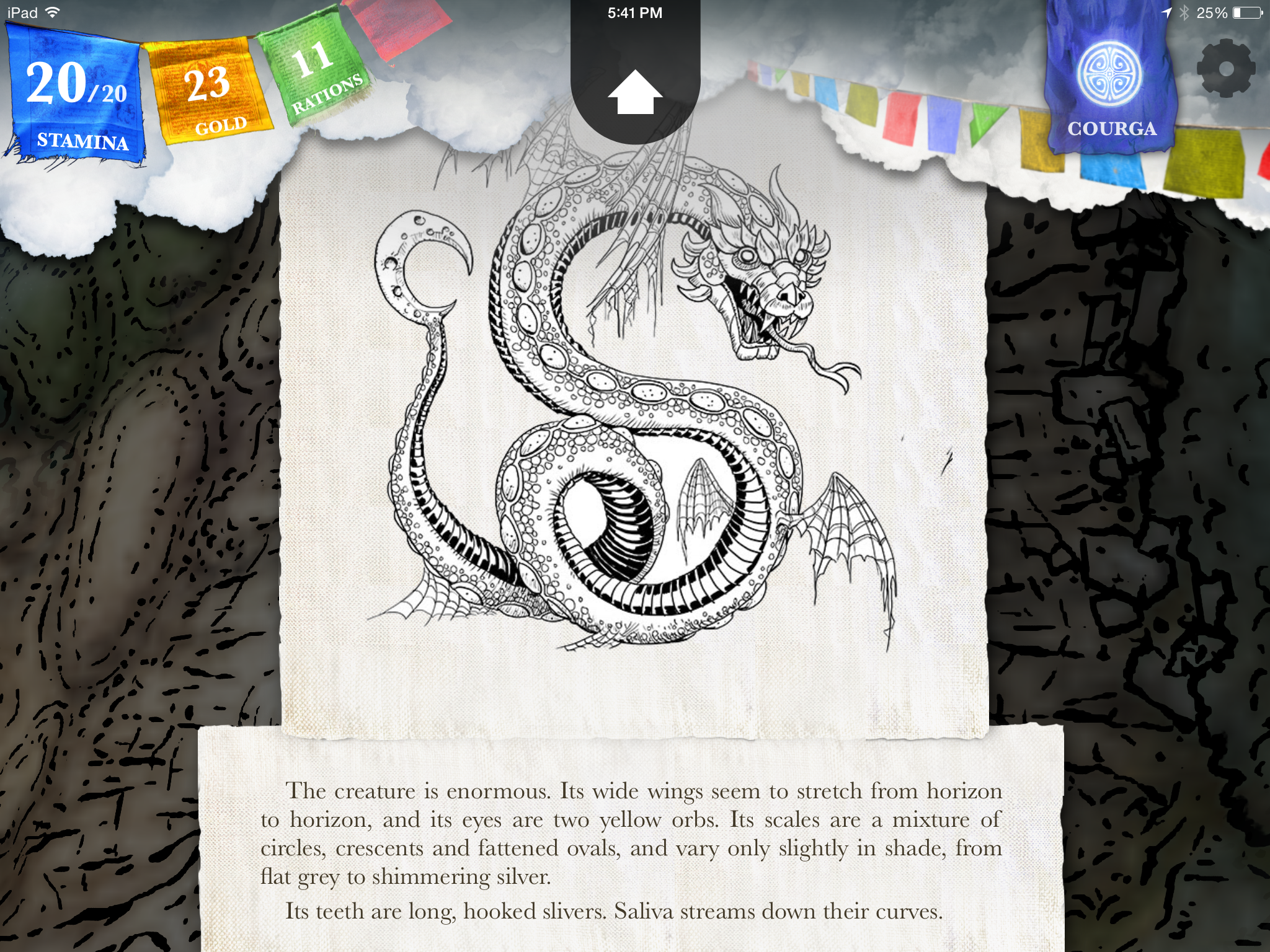 It must have been quite a challenge to write, too, since at this point the series has diverged pretty wildly from the game books on which it is based. Some changes were always inevitable: hand-drawn maps give a better sense of the world’s geography, and music helps to set the tone for pulse-pounding fights and quiet moments of discovery. As a video game Sorcery!’s text can be changed on the fly to better reflect previous decisions, and of course choices that once boiled down to flipping pages can be resolved at the press of a button, or by dragging your character around a map. With the ability to account for more variables without straining the player, new narrative angles open up. Inkle also takes advantage of procedural text generation for things like combat and swindlestones (itself a new addition to the mobile game), which makes those gameplay elements feel much more dynamic than they would as simple numbers and graphics.

But the studio has gone above and beyond the expected improvements, adding new scenarios and encounters to each game in order to flesh out their worlds. The Seven Serpents game book is noted for being the most difficult and linear game in the original series, yet Inkle went and completely restructured it to be the most open-ended game in the series to date. The whole concept of time travel is nowhere to be found in the book, but it’s arguably the linchpin of the adaptation’s entire plot – not to mention its gameplay. Time travel plays into a few mind-warping puzzles, and the Analander’s use of the beacons sets up a really clever twist toward the end of the game. On top of making the epic infinitely more accessible, Inkle has truly made Sorcery! their own, and when we finally get to play Sorcery! 4: The Crown of Kings, I suspect that they’ll have more than a few surprises in store. 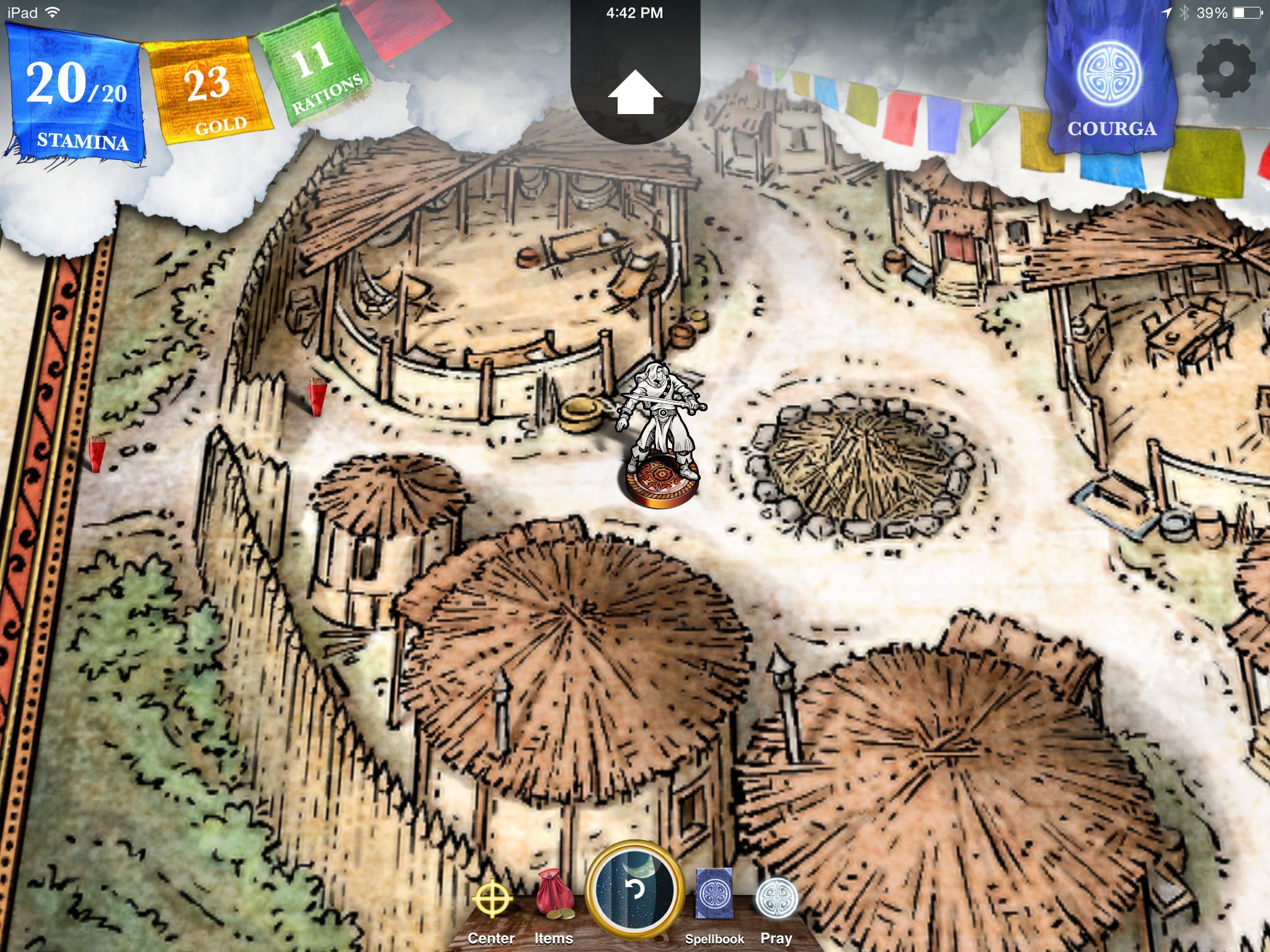 It’s tempting call Sorcery! 3 a singular achievement in narrative design like 80 Days before it, but that would be disingenuous given that it builds on two prequels and that the story isn’t even finished yet. As an epic, choice-driven narrative Sorcery! is only really comparable to the Mass Effect trilogy. Its prose paints a rich, vivid fantasy world and its dialogue blends challenging moral conundrums and fascinating logic puzzles so expertly that at times it’s hard to tell which is which. Like a great novel, Inkle’s games can steal entire nights of sleep from you as you’re immersed in their text, and Sorcery! 3 is their most potent work to date.