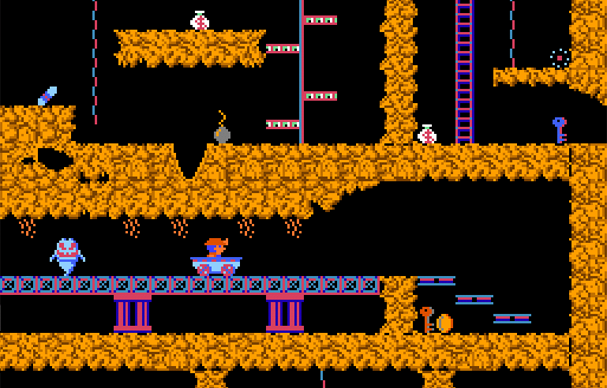 Those of us that remember having to blow into cartridges and pray to the video game gods to get their games to actually work have fond memories of the impressive NES catalogue. Not all the games on the NES were gems, however, as we tend to find out whenever Nintendo tries to go too deep in their catalogue and trots out something a little more obscure on the Virtual Console. Spelunker is one of those games, and while it was released on the Wii a while back, it just recently received a port to the newest Nintendo generation of consoles. Unfortunately, I have a hard time imagining that very many people were clamoring for this one again, as I’d have to go through a lot of NES games before I’d think Spelunker was worth a try. This isn’t a terrible game, but it is insubstantial and lacks real depth in terms of content and gameplay. It feels less like an NES classic and more like one of those flash games that try to mimic classic NES platforming, but shorter and less memorable. 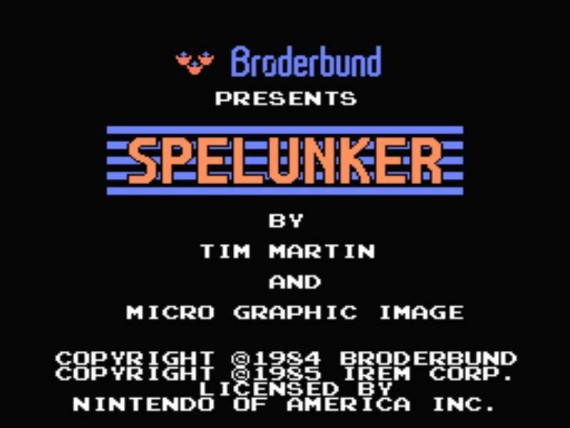 The goal of the game is just to get to the bottom of the cave and collect as much loot as you can along the way, which sounds simple enough until you actually get into it. This game is straight from the days of Nintendo hard, where every last pixel in a game was trying its best to murder you. Spelunker makes things even more difficult by making the hero suffer from brittle bone syndrome and some sort of blood clotting disorder, because this guy dies every time you look at him the wrong way. Get hit by a ghost? You’re dead. Fall more than a couple of pixels from a height that wouldn’t even break an egg? Yeah, you’re dead. Get pooped on by a bat? Totally dead (and smelly). Pretty much anything other than moving left or right is a recipe for death and the game isn’t always completely fair about killing you. The controls can be a bit challenging at times, especially when navigating ropes and ladders as they appear to have been recently greased and your character seems all too willing to let go and fall to his death if you don’t have the timing just right. It isn’t just that the game is hard (although it certainly is), but there are numerous cheap deaths that crop up every once in a while for the sole purpose of frustrating you.

Levels are simple, and fairly short. You need to avoid enemies (the aforementioned ghosts and bats) while collecting keys and bombs. The level exit is usually blocked by a couple of colored doors that you need a corresponding key for, and a certain type of rock needs to be destroyed with a bomb in order to move pass it. Various parts of the level need to be explored to find all the things needed and to collect extra goodies that boost your point total. None of the levels are that big, but there is a certain level of enjoyment that comes from progressing through each area and improving your high score in a game that is trying so hard to kill you. There are only four unique levels, unfortunately, so the amount of content in this game is very low. The platforming is kind of dull, and without the draconian difficulty there would be almost nothing to this game. Spelunker is mildly entertaining your first run through, but there isn’t really any reason to come back and will end up being a largely forgettable experience.

With the huge library of the NES still largely untapped, Spelunker is one of the titles that didn’t need or deserve a re-release. There just isn’t a lot of content here and the entire game would only last around ten minutes if it wasn’t for the difficulty. The level design is alright and the game is challenging enough that completing a level is actually fairly rewarding, but Spelunker just doesn’t have the long term appeal of some of the other classics on the NES. Coming in with a $5 price tag might seem like a bargain, but there isn’t enough game here to justify even that. You’d be better off finding the HD remake on the PS3, which comes with multiplayer modes and a ton more levels for only a marginally higher price. There are a couple of decent ideas here and hardcore NES aficionados might find something to like if they’ve already played through most of the NES catalogue, but ultimately Spelunker is a game that just wasn’t worth digging up.