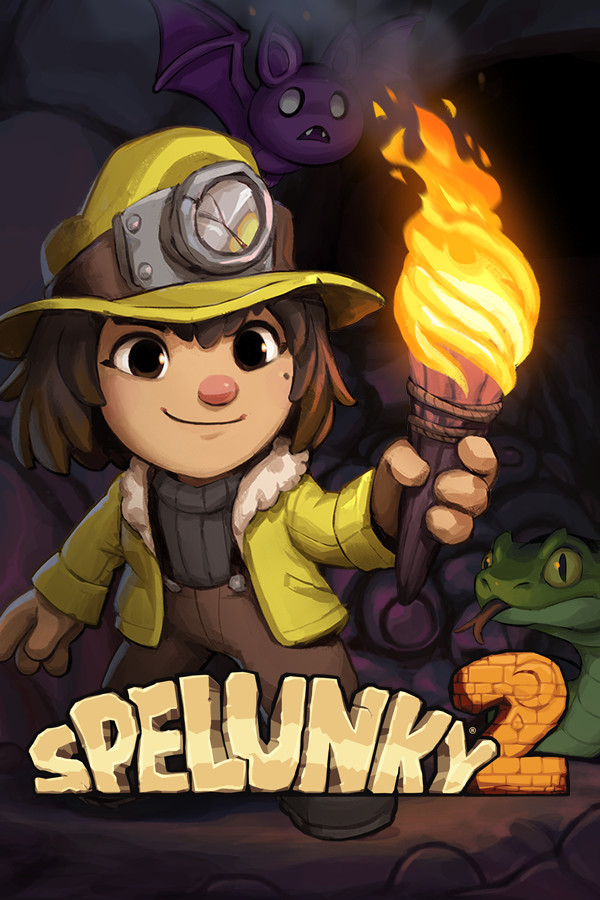 It might be shocking to hear, but Spelunky is over a decade old now. The first iteration arrived as a free PC game in 2008 before being recreated for Xbox 360 in 2012 (and many other platforms afterwards). Over the years the roguelike gained a massive fan following. The title received copious awards and with good reason — it was a masterclass in game design. Years after release, new secrets were still being uncovered. It was a brave (or foolish, depending on who you talked to) decision for Mossmouth to follow up its impeccable game with a sequel. Now that Spelunky 2 is finally out, it’s safe to say that this game is just as good, if not better, than its predecessor. This is both a huge surprise and massive boon for fans of the original who can delve into the many treacherous levels anew. Newcomers, too, can finally dive right in and see what Spelunky 2 is all about.

Spelunky 2 opens with a cute story detailing how the hero from Spelunky got married, had a child and then took off to explore the moon with his wife. His daughter Ana becomes the new protagonist as she ventures to the moon in search of her family. The story isn’t particularly important, but it provides a nice segue into a new game. Then there’s a simple tutorial which explains the basic controls and what you’ll need to do to survive. It all boils down to jumping, dodging and fighting as you explore 2D levels in search of loot. Existing fans won’t need this reminder, but new players will get the bare minimum from this intro. Of course, understanding the basic controls alone won’t get anyone far in this game. Spelunky 2, just as the original, requires a great deal of playtime in order to learn enemy patterns, proper trap avoidance, weapon usage and much more. Learning all these mechanics requires dozens upon dozens of attempts and failures before it finally starts to feel like second nature.

You might think that longtime fans will have a leg up. And to some degree, they do. But their Spelunky skills alone won’t make for an easy trek through the sequel. Right from the get go there are all manner of dastardly new enemies ready to ruin a run. Think you’re safe when standing on the ground away from enemies? Wrong — the mole is lurking, digging through the ground. Forget to keep an eye out for him and he’ll pop right up under your feet. Think those cute new turkeys are a great new mount to ride around on? Sure, they might be, but one wrong move and taming them might lead to your destruction. In many instances, it might be better to simply cook the turkey for a precious heart of health. Decision-making and resource management is all part of the challenge. Spelunky 2 is as hard as its originator, but adds onto itself with tons of new systems and considerations. 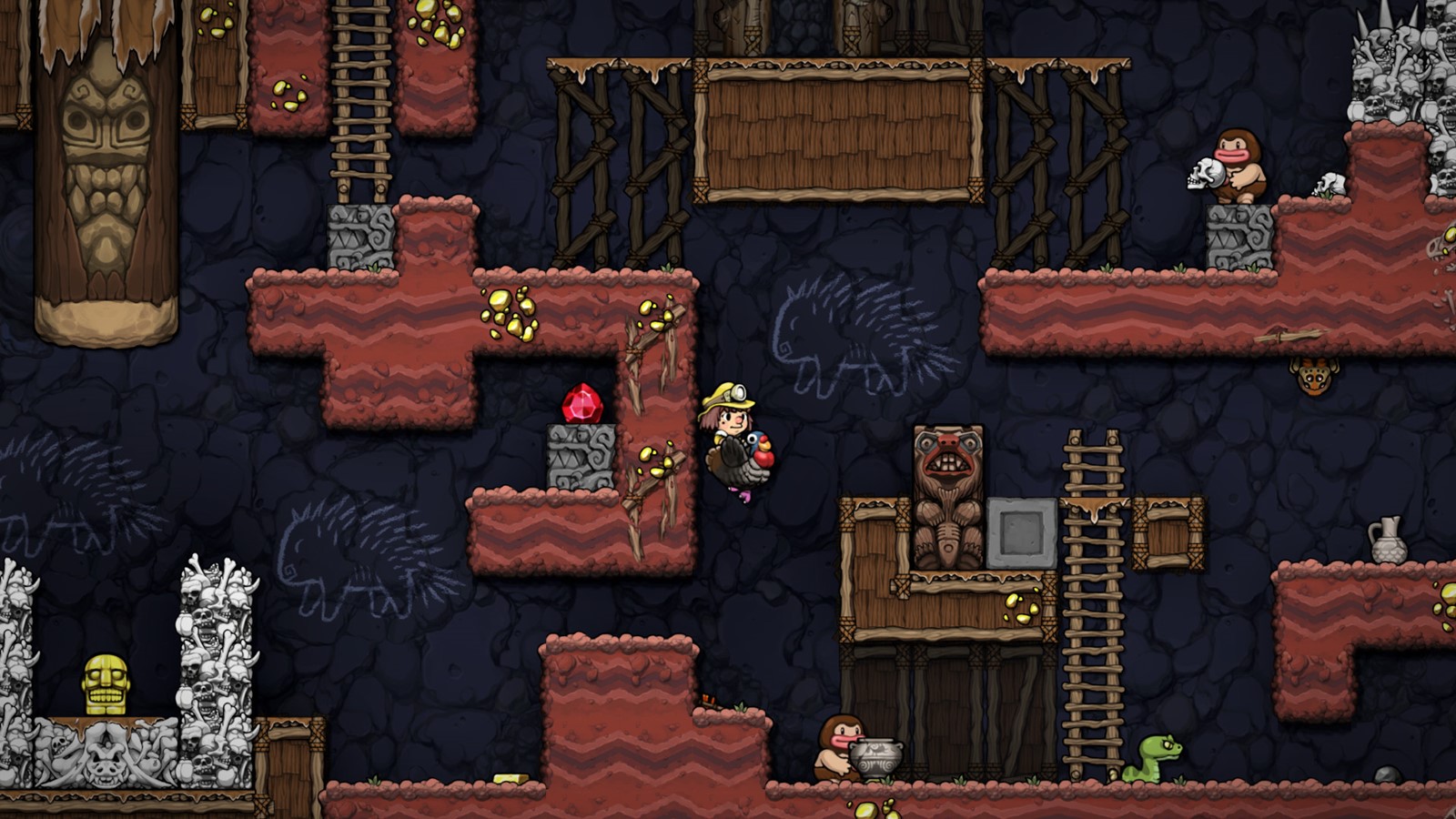 Changes to the flow of gameplay include no longer progressing through a set of predefined levels. After world 1-4 you’re free to choose between two different paths. One is a more difficult reprise of the Forest levels, while another puts Ana face to face with tons of bubbling lava. Lava is a terrible foe in and of itself. It features water physics now, meaning it can easily ruin your run due to a simple misplaced bomb. There’s a bunch of new gear to grab from the shop as well. For example, one new item powers you up with a flaming whip. It’s great fun to try out the new items since they enhance the player’s freedom. Shopkeepers are also less trigger happy this time around. As long as you’re not actively stealing from them, they’ll be relatively calm.

New hidden passageways also dot the procedurally-generated landscapes. These mysterious doors might lead to something completely uneventful. Sometimes they unveil new and exciting challenges (alongside other neat secrets). It’s a shame that many passageways are droll, as the concept alone is intriguing. This is one of those rare times where procedural generation may be working against a feature. Because so many of the rooms are duds, it makes you want to ignore them. But ignoring them means you’ll potentially miss loot or other cool surprises, so you have to check regardless. 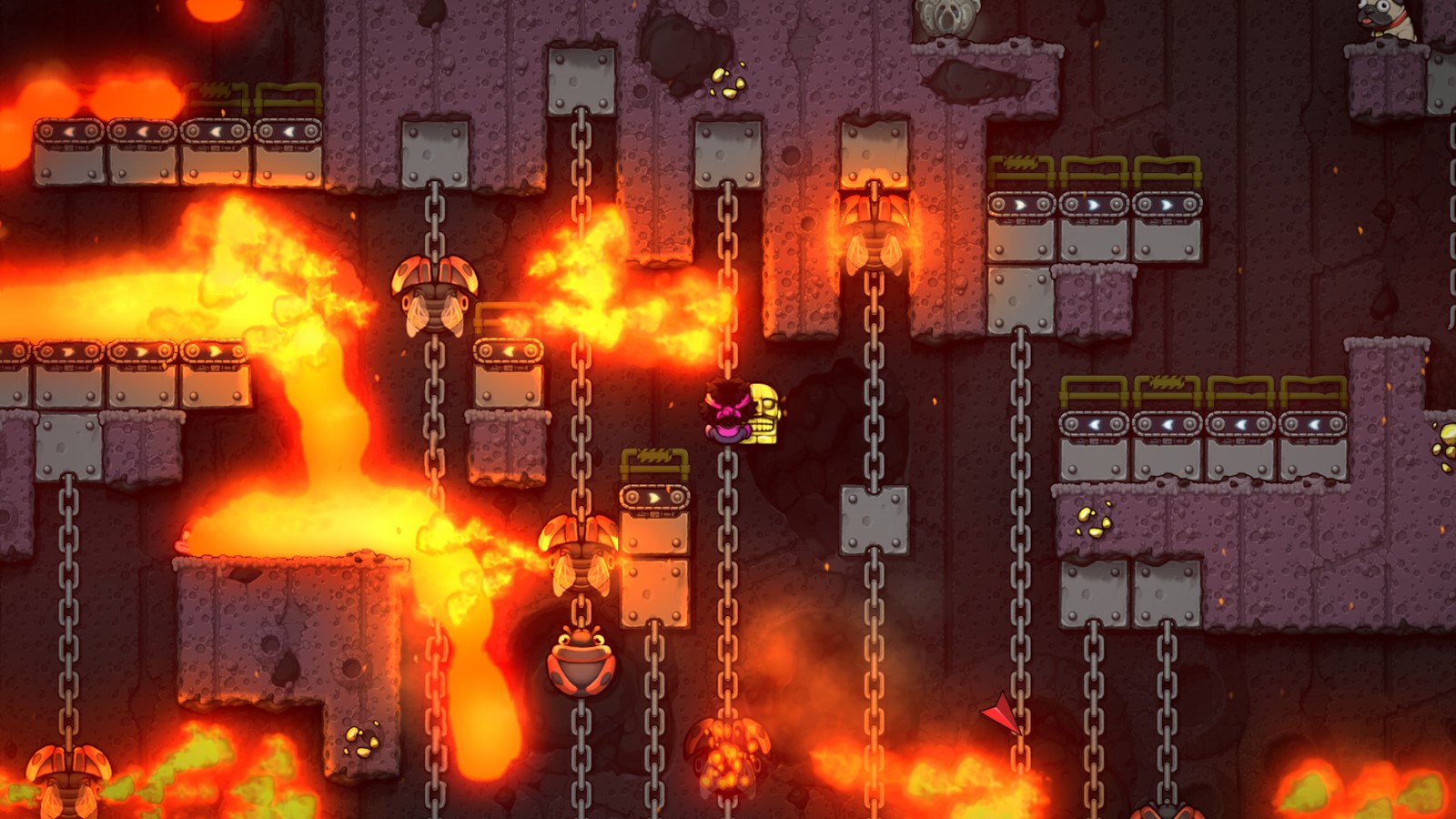 Visually, Spelunky 2 looks like a slightly prettier version of Spelunky. There’s actually a lot of visual flourish packed into the experience that might not be noticed immediately. Enemies now have a ton more animations. For example, the cavemen are more interactive with their environments. You might find one happily holding a gold bar or conversing/spitting on another caveman. This adds to the charm of the entire experience. There’s also a lot more detail in the backgrounds and levels themselves. Sometimes this causes a bit of an issue, such as when a banner or tall grass obscures an enemy or trap. It’s harsh, but being highly aware of all surroundings is a key for mastering Spelunky 2.

The key thing about both Spelunky and Spelunky 2 is that they’re just plain fun. Spelunky 2 brings new tricks into the mix, but never at the expense of enjoyment. Players are sure to get frustrated, but it’s due to their own mistakes that led to an untimely downfall. All these upgrades leave this intact. None of the upgrades mess up the balance or gameplay in such a way that the game is truly ever unfair. It’s up to players to perform at their peak to make it through every stage. 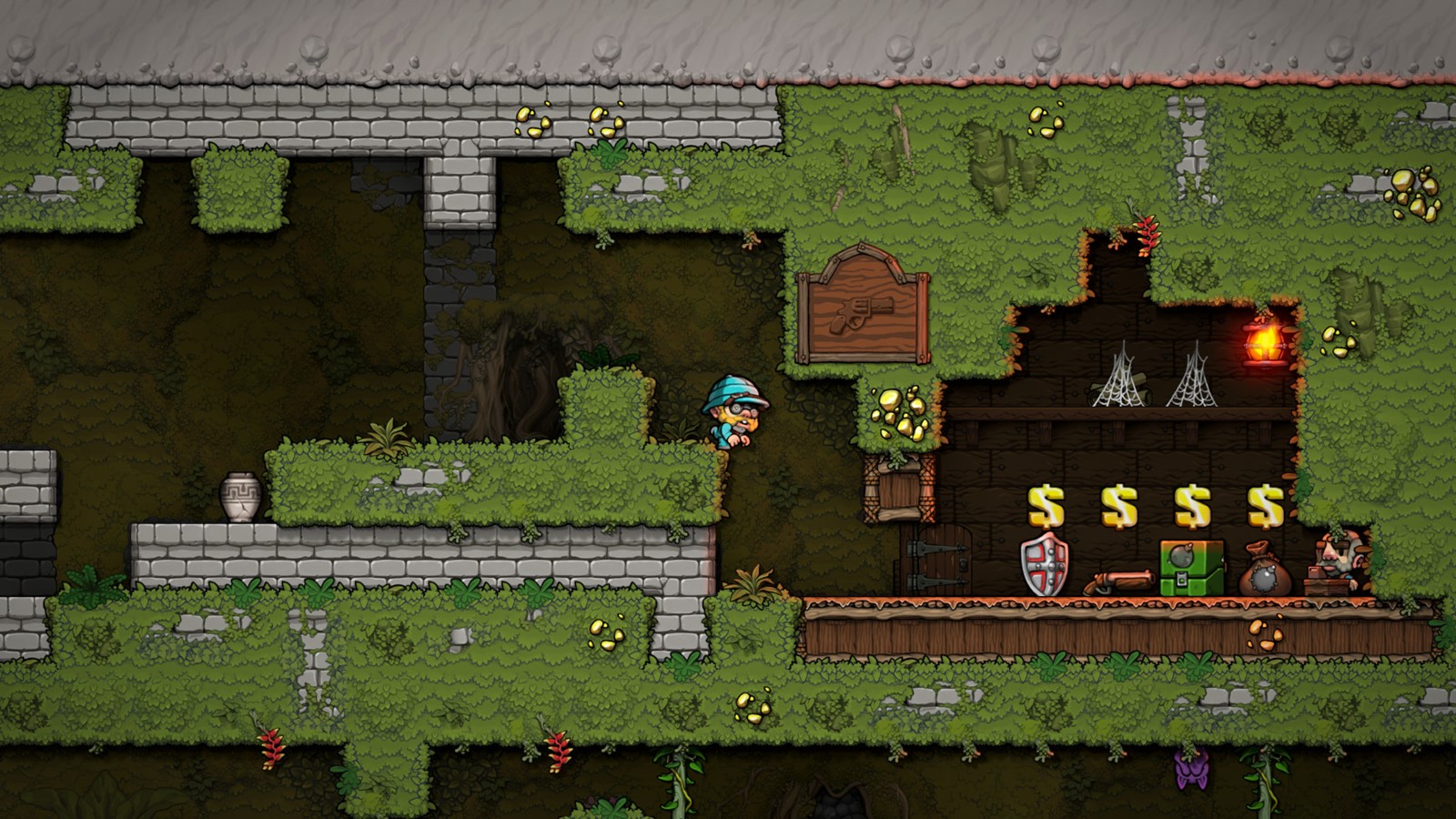 Mossmouth did the impossible with Spelunky 2 in managing to create a sequel to an incredible game that did not disenfranchise existing fans or turn off newbies. Instead, they’ve crafted another hard-as-nails experience that’s devilishly fun to play. Almost every new feature is an improvement and the new visual and audio flourishes enhance it further. Those who never played the original game don’t have to. They can jump straight into Spelunky 2 and enjoy a masterful title that will likely never grow old.