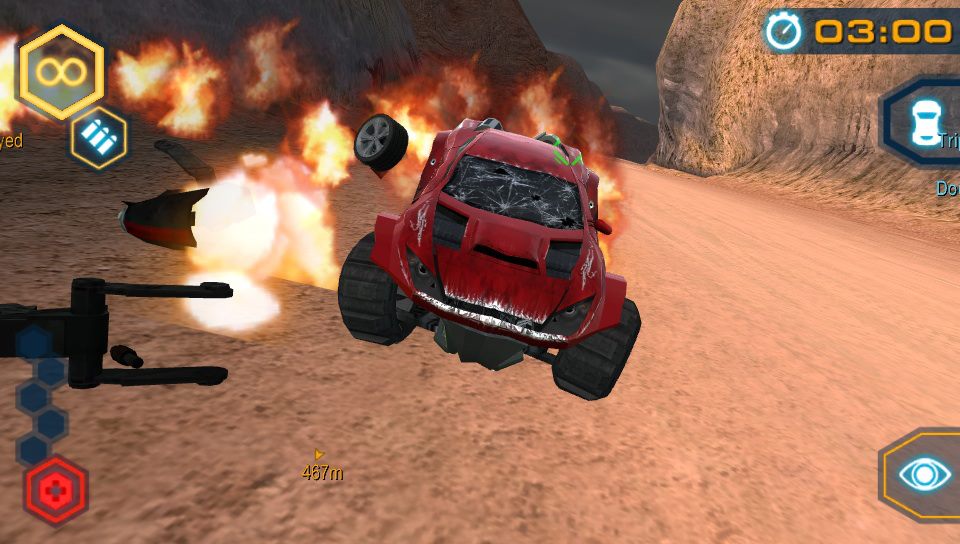 With so many high-budget reboots straying from their origins, it’s always refreshing when arcade classics are brought into the 21st century with their gameplay intact. Case in point: Spy Hunter. Same as always, players blast down the road while avoiding hazards and blowing away enemies. It’s gaming at its most raw and is a formula proven to excite no matter the decade or console. After a six year absence, the series is back and ready to again re-establish its relevancy.

Designed by the government as an experimental line of defense, players take on the role of the prototype G-6155 Interceptor. As its name may suggest, this is no ordinary automobile. Besides the capability to drive at blistering speeds and transform itself, the Interceptor is packed with some serious firepower. There’s machine guns, missiles, mines, flamethrowers, shockers, shotguns and more always at your disposal. Four weapons can be used at any one time mapped to each of the PS Vita’s face buttons. Players begin with four default weapons and can collect more throughout the game to swap out in-between levels. While they won’t all prove effective, not a single one isn’t a blast to use, with the control accessibility rendering them easy to cycle through during the frequent chaos. One moment you may be firing your machine gun at barrel dumper, when a enforcer comes from behind (handily indicated by red arrows on the bottom of the screen) simply asking for a windshield full of mines. 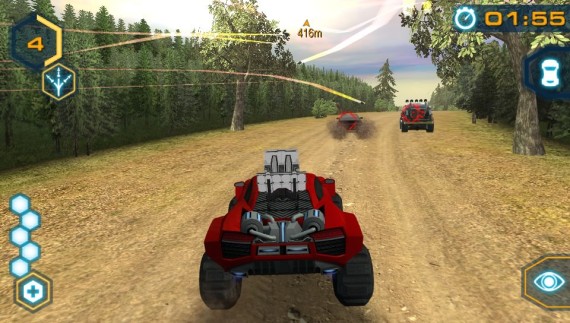 The Interceptor itself is controlled by the analog stick and R button. Tapping the R button twice burns off compression gas to give the car a limited boost to outrun any pesky adversaries. As powerful as the car is, it’s not invincible. Health stems from six “mini-reactor cores” that lose integrity as the car takes damage. Each one can be regenerated when not taking damage, but explodes once fully-depleted and cannot be recovered until a weapons truck is reached. Acting as a safe house, weapons can be swapped out inside the trucks mid-level if a more “suitable” opportunity arrises. If the truck is ever threatened while the Interceptor is in maintenance, players can take control of an deployable turret to dispose of any threat.

One of the most novel additions to Spy Hunter is that of the UAV (Unmanned Aerial Vehicle) drone. Accessing it inside the weapons truck sends players into satellite mode where airstrikes and mortars can be placed to help clear the way ahead. The screen switches to the drone’s viewpoint when activated, with movement being controlled by the analog stick. Enemies are denoted on the map and marked for a mortar when the screen is tapped or airstrike when swiped. The UAV can connect to an orbital laser known as “Sky Needle” to destroy large fortifications — awesome enough to call for a slow-motion sequence whenever activated. Much like the Weapons Truck turret, the UAV is nothing revelatory, but brings a new angle that helps break up the monotony of missions.

As rewarding as gameplay feels, there’s issues with over-responsiveness. It’s challenging to straighten out the Interceptor after having to suddenly change directions — a frequent movement in vehicular combat games. Fishtailing is an all-too-common occurrence, making it difficult to nail narrow jumps peppered throughout missions. Collisions could also have been handled better. Instead of simply bouncing off objects and taking damage, the car can easily do a ragdoll flip or spin around. While it may be more realistic, losing that sense of speed in a game all about momentum lowers the intensity considerably. 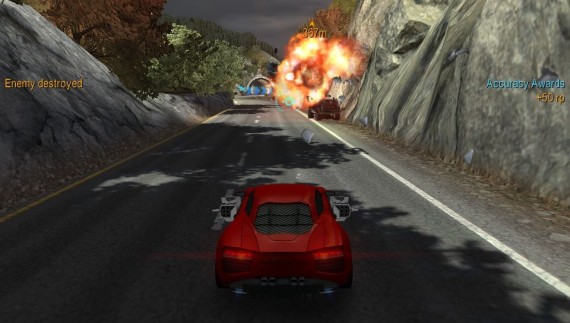 Of course, any handling issues are easily forgiven based on the sheer ridiculousness of the proceedings. Spy Hunter should never take itself too seriously– something that was an issue in the series’ last few entries. While a disposable plot moves the action forward, nothing about the concept makes sense and developers TT Fusion know it. The majority of the game simply has you firing non-stop while avoiding huge environmental hazards like ships and power plants collapsing around you. Crazy occurrences throughout will have you laughing in disbelief. One mission has a giant semi suddenly crash over a cliff and chasing you down while blowing through any obstacle in its way — including smashing right through a moving freight train. Other highlights include entering a cargo plane through the loading bay only to burst through the cockpit and launching off an aircraft carrier to destroy a fighter jet in mid-air.

It’s a shame that such enjoyable gameplay comes in such an unpolished package. From the embarrassing opening cinematic that looks like it was ripped straight from YouTube — circa 2004 — and the simplistic menu design featuring low-res font and boring backgrounds, everything about the release screams limited resources and a low budget. In game characters announcing mission objectives are unvoiced and represented by generic cartoon drawings. While in-game visuals are serviceable, they don’t come close to matching the best Vita has to offer. Cars look good enough, but environments are a bit barren and blocky — especially if you happen to get up close. To make matters worse, almost every song on the soundtrack is either the “Peter Gunn Theme” or a variation thereof. As much as I love that tune, hearing it over and over again becomes a little maddening. 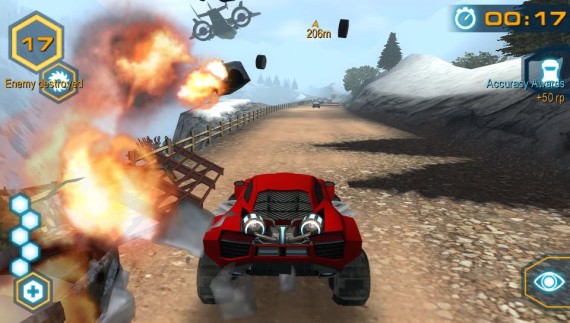 If publishers are willing to take the risk of keeping the spirit of classic games alive, it’s a shame the same courtesy isn’t extended to budgets and development windows. With tried and true elements combined with attractive new features, Spy Hunter is a blast throughout its meaty campaign. The fact that such a poor presentation doesn’t completely hinder the enjoyment of the title speaks volumes to the strength of the gameplay. As it stands, fans of arcade-style mayhem will adore Spy Hunter, but its low rent appearance will prove a nagging reminder of missed opportunities.