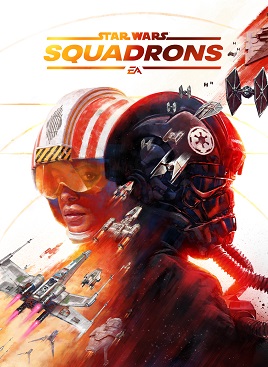 After seven years of struggling to create a well-received AAA title with the beloved Star Wars license, EA finally struck gold with last year’s Star Wars Jedi: Fallen Order, with Titanfall developer Respawn capturing the joys of that universe through engaging exploration and combat. While a sequel for the action-adventure title is almost undoubtedly in the works, the major publisher likely still feels some pressure to create another successful adaptation as they approach the end of their current ten year exclusivity deal with Disney. Back in June, EA revealed Star Wars: Squadrons, a spiritual successor to the classic Star Wars dogfighting games that’s being developed by Motive as their debut title after being founded in 2015 and assisting with the single-player campaign for Star Wars: Battlefront II. With cross-play, VR and flight stick support alongside a $40 price point at launch, Squadrons has seemingly been created as one of the more accessible Star Wars titles to date with no microtransactions available at launch. Despite a mediocre single player campaign and only two fairly straightforward multiplayer modes, the polished, challenging and captivating space flight and combat of Star Wars: Squadrons combine for a consistently fun experience that should appease new and long-time fans alike.

At the heart of Star Wars: Squadrons is its first-person piloting mechanics, which will likely represent the first and greatest barrier that players must adjust to and overcome during the introductory prologue. Our time with the game was spent exclusively using a traditional controller and TV setup, which has turned out to be a perfectly manageable way to play it despite some initial control frustrations. While the right stick adjusts the direction that the front of the ship is facing, the left stick is responsible for both acceleration and the ship’s physical orientation, which imposes some intentional limitations that gradually become second nature as the player spends more time in the cockpit. As a result, both simple and complex maneuvers require a level of concentration and plenty of micro-choices that keeps the core gameplay feeling fresh as players gradually improve their capabilities and pull off more daring moves that wouldn’t have been as successful in the hours prior. In addition, the D-pad allows players to manage different elements of the ship in order to prioritize lasers and gain additional firepower, engines to increase maximum speed, shields for extra protection or balance it all out. It rarely feels essential outside of select single player mission beats, but more skilled players can adjust these power levels on the fly to give them an extra edge on the battlefield depending on the situation, and provides opportunities for pre-combat planning. Like most flight simulation titles, collisions are to be expected especially in the early hours, but the game rarely punishes you too severely, particularly within the single player campaign.

Despite a few single player objectives asking players to scan various objects or follow an ally, most of your time spent in Star Wars: Squadrons will be spent fighting against similarly sized or much larger ships. Squadrons offers eight unique ships, four for the Republic and four for the Imperials, and each of them has a primary laser weapon, countermeasures to dispel incoming missiles and two unique abilities that include repairing your ship, firing missiles or sending shields to your allies, among others. All of these operate on a cooldown system and the unique cockpit view for each ship all manage to keep that vital information, along with player and enemy health, in easy to spot locations, even if the dashboard and the distinctive windshields can restrict exactly how much of the world the player can see around them. The reticle and targeting system both do an equally excellent job of quickly letting players know how to lead shots and ensure that your lasers actually hit their targets even at high speeds, as well as when you’ve locked on long enough to fire off a missile. These immersive elements all combine to keep the player focused on the action in front of them which makes simultaneously trying to fly and shoot in a 3D space more manageable and intense without being overwhelming. Chasing down other pilots as they try to weave and dodge through tight spaces and still managing to deal damage and destroy them represent some of the most exhilarating moments of Star Wars: Squadrons, while bombing runs on frigates aren’t as enticing but has its own appeal through taking out specific weak points or turrets. 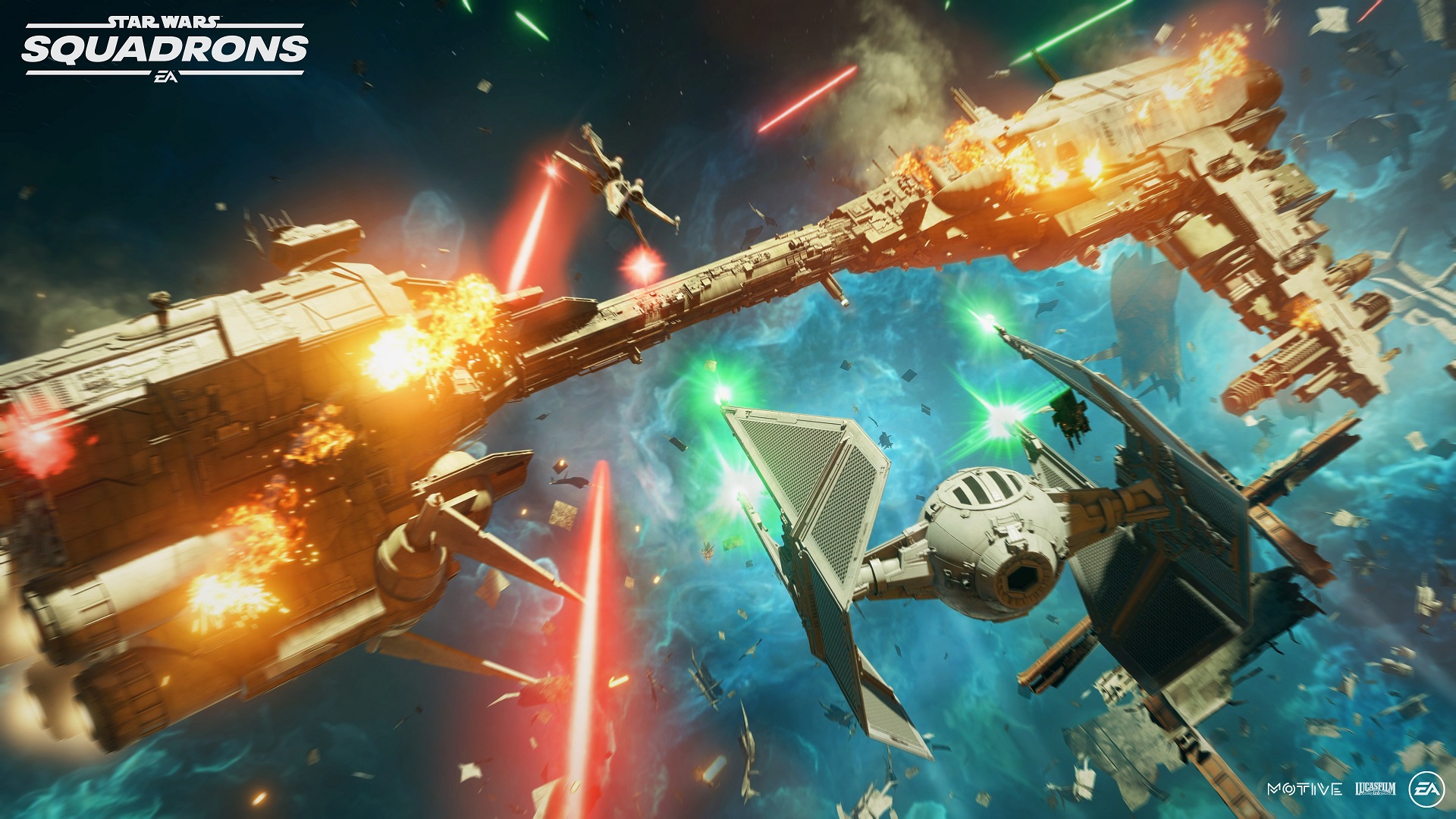 The single player story mode of Star Wars: Squadrons takes place primarily shortly after the events of Return of the Jedi, as the Rebellion starts to gradually transform into a New Republic and the Imperials struggle to maintain power after losing the battle of Endor. Before the opening prologue, players will create two human pilots using light customization elements for each faction, as you’ll view the story as a new member of the Vanguard and Titan squadrons as they investigate the mysterious Project Starhawk and its potential to shape the ongoing war. In between missions, players will partake in briefings for their next objectives, and have the opportunity to customize their ship’s components, talk to their fellow squadmates and explore the hangars in a limited manner. While the Vanguard squadron has a nice sense of diversity to their characters, few of these conversations are memorable as your leaders and allies monologue at you about their backstories or the importance of the battles to come with little in the way of levity or originality for those that have previously experienced the military-adjacent dialogue of Star Wars in any capacity. The eight hour campaign doesn’t outstay its welcome, and finds a nice sense of variety through new locations and forcing players to try out different ships classes, since the majority of the objectives throughout are largely and expectedly comprised of dogfighting, outside of a few opportunities to scan objects or narrowly cause and escape explosive blasts in tight corridors. Teamwork also plays a crucial role throughout the campaign, with a dedicated button to ping a ship or location for your squadmates to focus on by pressing it and a resupply of health and ammo with a long cooldown by holding it, both of which turn out to be essential in some of the more challenging sequences. Each of the fourteen missions also feature optional objectives, which reward players with medals at the end of a mission that are also given for meeting certain criteria like reaching the end without dying that will likely provide replayability for more dedicated fans.

The larger focus of Star Wars: Squadrons is its multiplayer offerings, which is primarily centered around two online modes. The first one that’s available from the start, along with an offline practice mode, is Dogfight, which is a traditional team deathmatch where squads of five try to take out one another within a set time limit. The six maps available at launch provide a nice sense of variety to the combat, as locations filled with debris or space stations provide some nice reprieves and means to escape encounters, but the wide open Yavin Prime area has no such luxuries, leading to shorter matches with closer outcomes. Once you reach level five, players can access Fleet Battles, which has its own dedicated tutorial and unranked option where you can compete against AI. In addition to throwing AI into the mix, Fleet Battles starts off like a traditional dogfight, but eventually progress into a focus on attacking and defending frigates of increasing sizes, with most matches featuring multiple opportunities for both thanks to a morale meter that can be influenced by AI and player deaths, with larger ships representing bigger gains. The constant tug of war nature of this mode makes most battles feel close and engaging even when the teams don’t share the same level of balance, and players who want to specialize in less traditional roles like Support and Bomber will find more ways to assist their teams through less conventional methods. Despite encouraging a strong sense of teamwork and featuring a skill-based ranking system, Fleet Battles start to feel familiar too quickly, with little to no deviation in the types of ships you end up bombarding and long periods of waiting for respawns and traversals back to the battle that leave much more downtime during these lengthier showdowns. The lack of depth in both of these online modes at launch is easily its biggest misstep, despite the compelling gameplay they both can occasionally feature, and does little to inspire any sense of confidence that this game can sustain a sizable audience in the months to come. 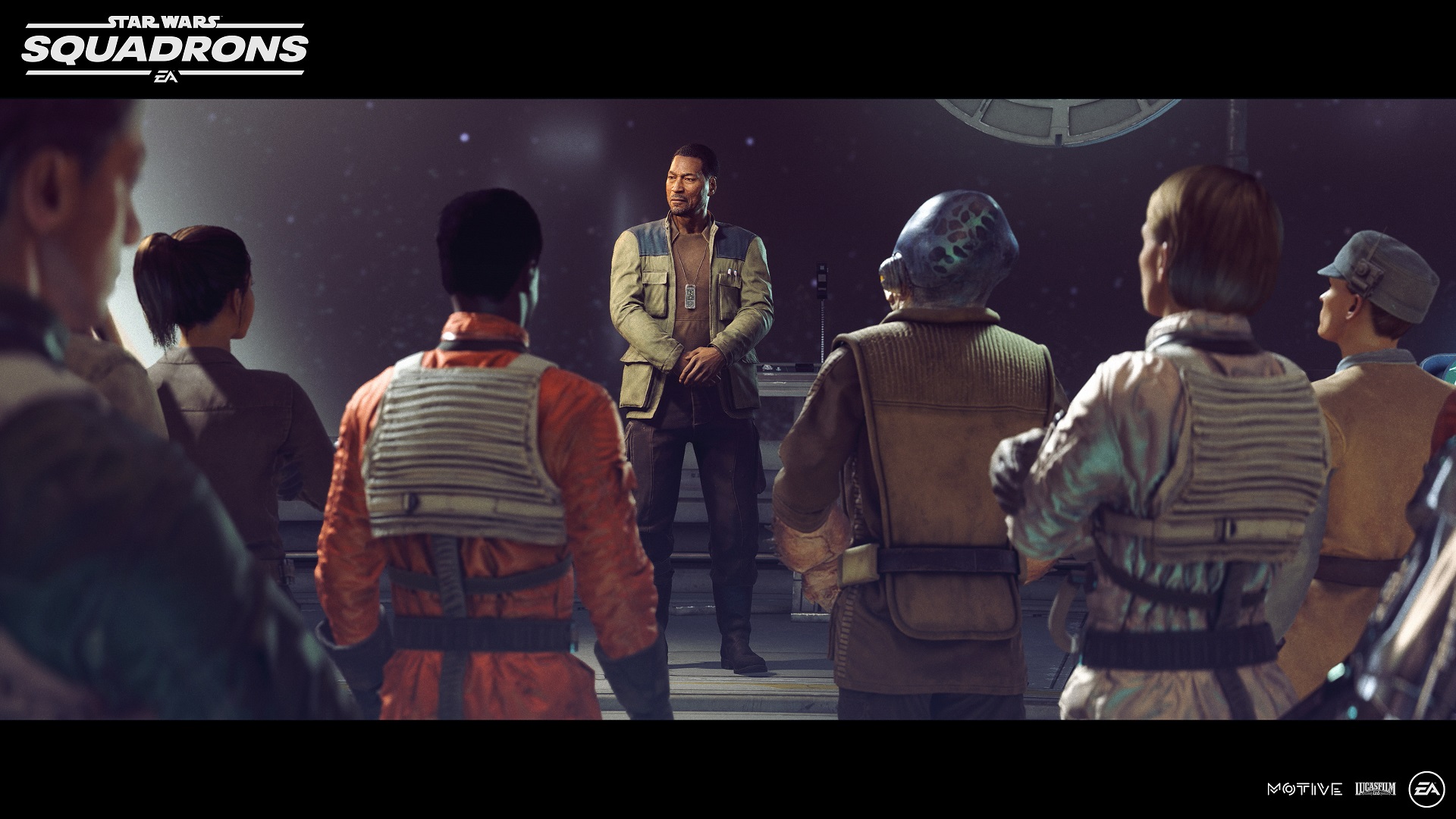 The loadouts for your ships do a better job of allowing for experimentation, with each ship offering several slots for interchangeable active and passive components. Players who want to engage in constant dogfights can change the way their lasers fire and try out ion weapons that will temporarily stall a fleeing enemy, while more teamwork-oriented players have plenty of options to remain invisible from radars and homing missiles as well as ways to help their squadmates by providing shields and marking enemies. Meanwhile, passive components offer more in the way of high risk, high reward strategies, trading in health or ammo for better maneuverability or more boost to help with hit and runs or quick eliminations. While the requisitions currency can be utilized to purchase these components, glory can be used to purchase new aesthetics for your ship or pilot, including new paint jobs, decals, holograms, outfits and even the option to play as a non-human. While it doesn’t take long to acquire high amounts of either of these currencies at the early levels, players can gain more glory by completing daily challenges, which all contributes to the bi-monthly operation and its limited-time rewards.

Outside of truly impressive faces in the single player campaign, the graphical presentation of Star Wars: Squadrons is mostly solid without being exceptional, featuring detailed cockpits and a great use of colors in select locations. The sound design, like much of the game, draws heavily from the movies by featuring new and iconic orchestral pieces of background music as well as familiar noises during flights and battles to fully immerse players in that world. The voice acting is well done throughout, but rarely manages to shine by the inherent nature of it largely being comprised of military and combat barks that are easily lost in the heat of battle. Outside of a few instances of glitched AI ships aimlessly flying around and some brief moments of lag, Squadrons runs well on a high-performance console, with a consistent frame rate and almost no texture pop-in despite the high-speeds players typically move at. Right from the start, the game offers plenty of accessibility options as well as four difficulty settings and an option to turn the UI off altogether, displaying yet another way Squadrons emphasizes customization and inclusivity to its ever-growing audience of Star Wars fans. 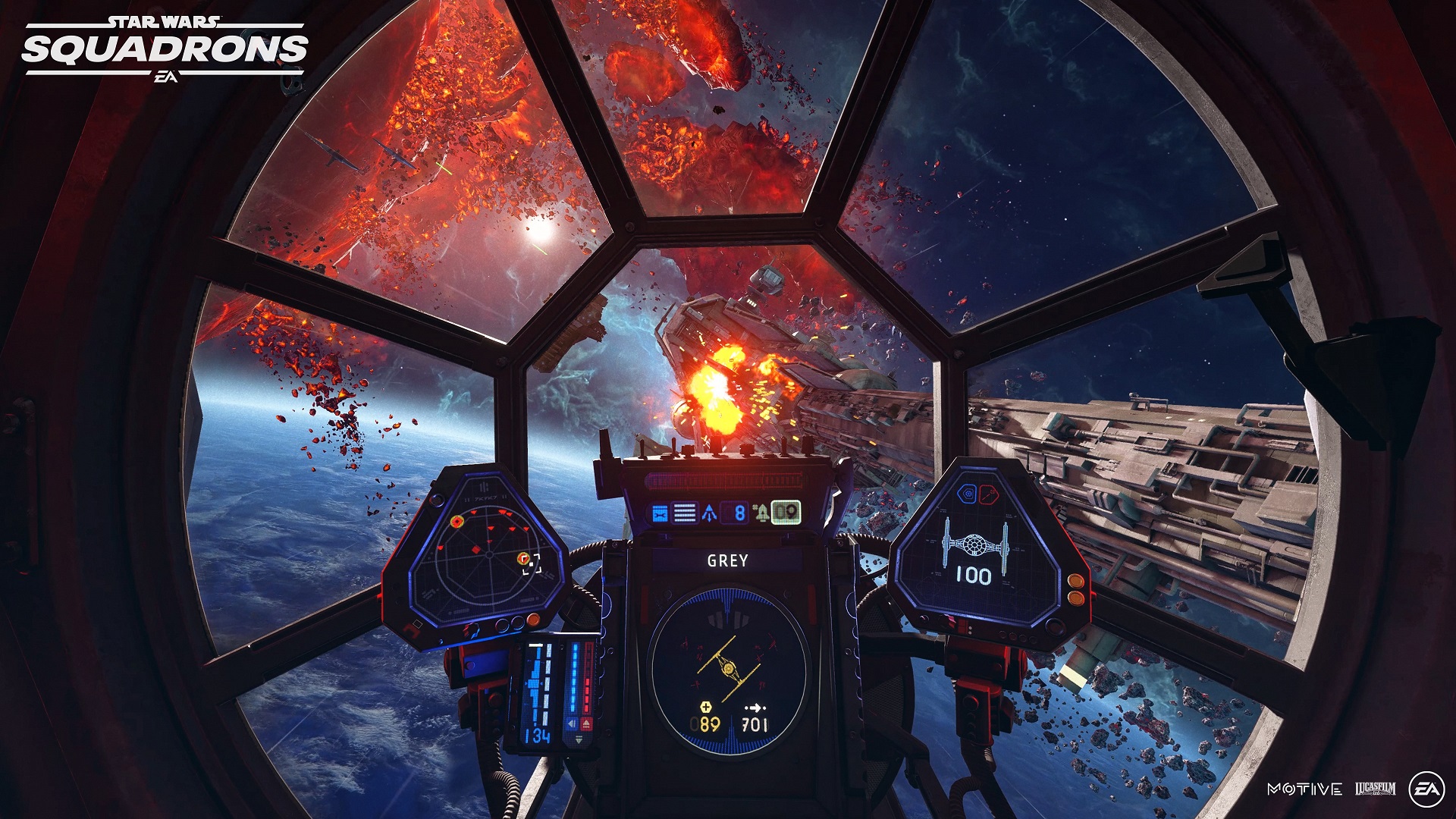 Star Wars: Squadrons nails the inherently exciting feeling of piloting and fighting in its iconic starfighters, but the paltry single player and multiplayer modes fail to do anything ambitious or impressive with the core gameplay. The sheer amount of gameplay and aesthetic customization and clear passion for the license do their best to make up for these shortcomings, and could keep dedicated Star Wars or space combat fans invested. But as the hours wear on, Squadrons’ repetitive objectives starts to feel less like a main attraction and more like a fun diversion, ultimately leaving the game as an enjoyable multiplayer experience to return to when you feel that itch for a few rounds of frantic and fast space combat.