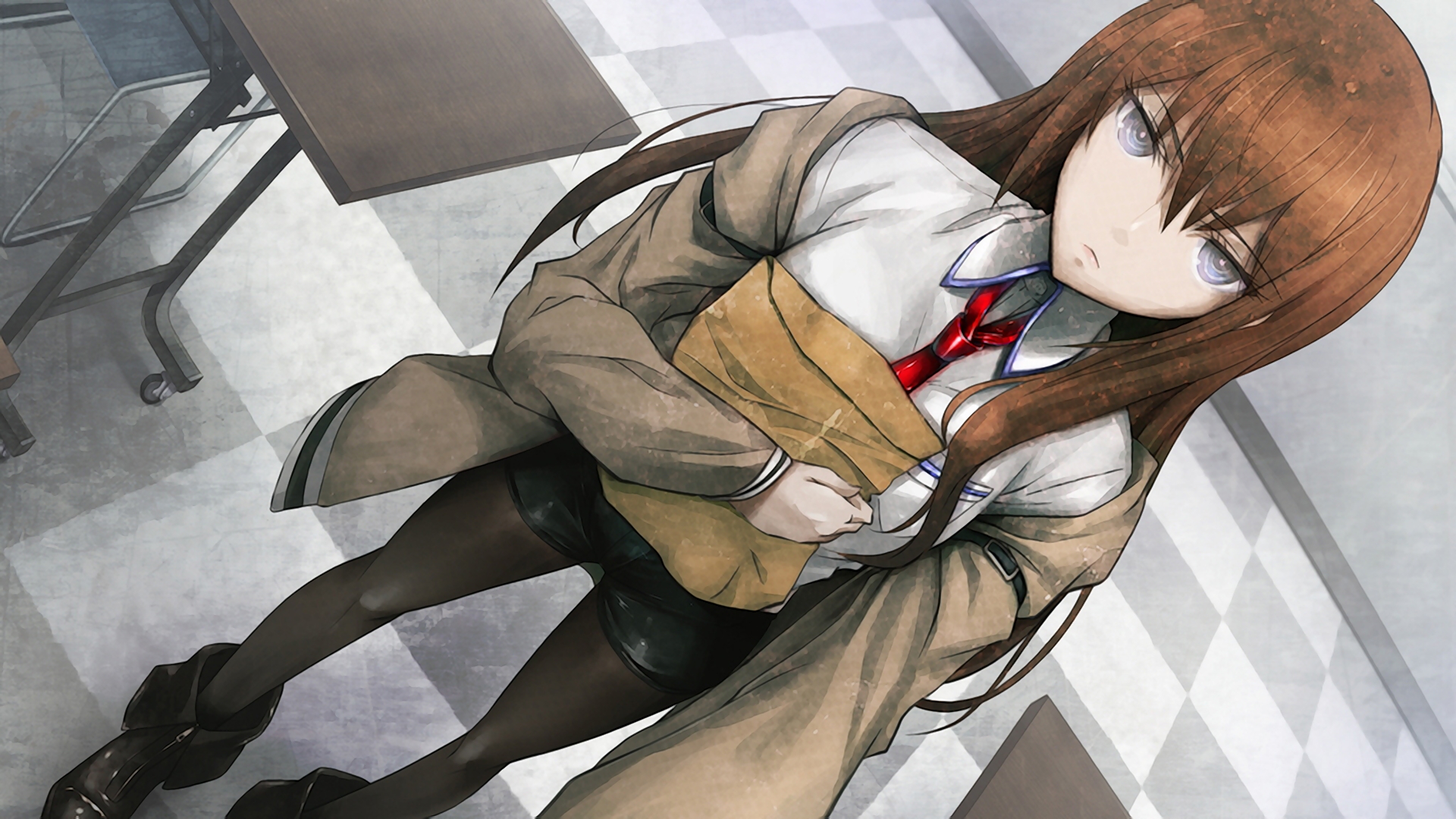 Steins;Gate has been incredibly popular ever since its conception in 2009. This visual novel in particular has been of interest for fans, to the point that there was a fan translation released years prior to JAST USA’s official localization. Even still, here we are, finally with the realized product in-hand. By visual novel standards, it seems that the game has been well-worth the wait. Let’s find out why.

Since this is a spoiler-free review, we are going to do our best to detail the story without giving away too many major plot points. Broadly speaking, Steins;Gate tells the tale of one Rintarō Okabe, an 18 year college freshmen at Tokyo Denki University, with delusions of grandeur regarding his belief that he is a true-to-life mad scientist. Aside from these self-proclamations, Okabe is generally an eccentric character who is considered paranoid by many, primarily because his tendency to talk about “the organization” that is chasing him, in addition to talking to himself on his phone and regularly engaging in bouts of insane, maniacal laughter for no apparent reason. On the whole, Oakbe comes off as fairly arrogant, at times, though beneath the figurative, and literal, lab coat, there’s a much more compassionate and empathic person to be found and understood. That being so, Okabe really comes into his own after he experiments with the concept of time travel at differing points in the adventure. In the end, he eventually comes to find out that he is the only person capable of determining changes between different timelines. Naturally, this innate ability weighs heavy on him and forces him to make hard decisions throughout the game. Truthfully, Okabe is a genuinely interesting character, rarely falling into a stereotype or overused narrative trope. Far too often in visual novels is the playable character devoid of any kind of real personality — or at least one that’s interesting in any way. Here, however, Rintarō is the star of the show and steals practically every big scene in which he’s featured. His interactions with the rest of the cast are especially fun, as his unpredictability and overall mental health instability lead to wild scenarios and, better yet, hilarious dialogue exchanges. 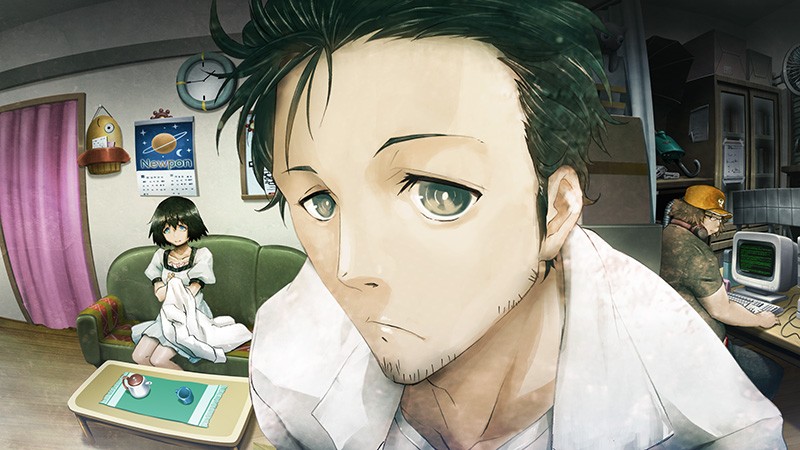 In fact, nearly all of the characters in Steins;Gate are well-developed. They each bring a distinct personality to the proverbial table, ultimately creating situations that are a delight to watch. The variety of characters also further helps the story feel wholly unique too, seeing as each possesses their own special qualities, all the while still managing to very rarely fall into a category of eye-rolling clichés. But perhaps what makes the characters stand out so incredibly well is the expert localization. JAST USA’s efforts in this translation project are truly are top-notch stuff, with their delivering of crisp writing, witty dialogue, and fleshed out characterizations that only serve to cement the overall reading experience even more. In the visual novel realm, it’s imperative that a game is free of grammatical errors and the dialogue itself reads well and fluidly; Steins thankfully almost always nails this accomplishment, captivating players with the kind of prose that hits a range of emotions, from humor to sadness and everything between. Much of this kind of localization charm is often lost-in-translation when a game is given to an audience that isn’t its original, intended one; fortunately, those responsible for interpreting the game into English clearly had a strong command of the Japanese language. This, then, comes out in the actual words and sentence structure used throughout, giving us a reading experience that is easy to understand and process.

In terms of the actual content of the story, Steins;Gate is an exciting tale at large. It’s obscure, it’s mysterious, it has moments of great triumph, as well as crushing defeats; essentially, it knows how to weave a narrative that can ratchet the intensity up to 11, but also grasps when to pull back and provide segments that are more low-keyed, giving the player a short but needed breather from the sequence of events. That being said, the real story does take a bit to get started, after the beginning portions of the game drag their feet with stage-setting angles. This sluggish start hurts the experience a bit as we can see some folks not sticking with it for the entirety. This is a shame, too, because of how electric the tale is once it gathers steam. Interestingly enough, once that unhurried start is out of the way, the game is actually staggeringly well-paced, dishing out bits of information in a way that keeps you wanting to play just a little bit more. Of course, we have to talk about the dramatic crescendos and plot twists since the game relies on them almost exclusively to keep folks interested. There are a few times in which these turns can be seen coming, but generally speaking they are executed in a way that is surprising, and more impressive, fully rewarding. In fact, the tale is one that generally pays off its players with satisfying hooks, making great use of a return-on-investment kind approach. 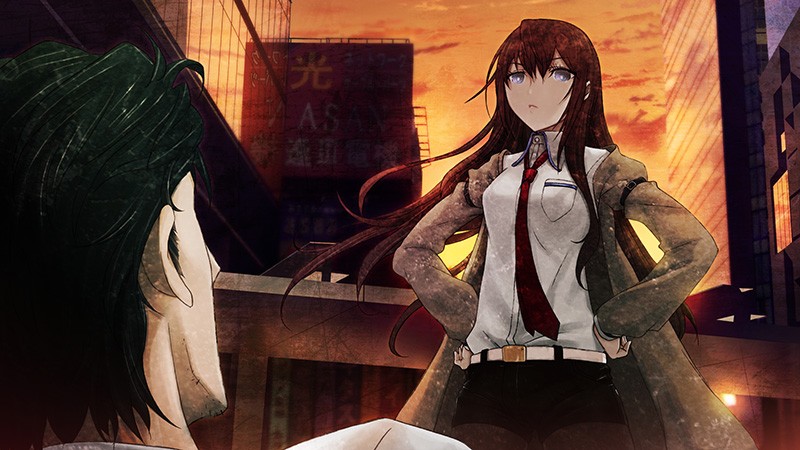 What Steins;Gate does best, though, is giving players a sense of control over how the game unfolds. That’s right, there are several endings, including a tough-to-obtain-but-infinitely-rewarding “true ending” that only come to fruition from the choices players make throughout the story. This type of empowerment always goes a long way, but in a visual novel, it means just that much more because of how invested players become with the characters. At the very least, this gives Steins a ridiculous amount of replyability

To deliver the big climaxes, the game implements wonderfully expressive character portraits that capture the emotionality extremely effectively. This kind of thing can act as the downfall of a visual novel, as there isn’t any kind of traditional character model to display the range of sentiment being asked of them by the story’s turn of events. Moreover, the art in general, environments, backgrounds and characters alike look phenomenal, clearly drawn by professional artists that wanted to ensure the visual integrity of the total experience. The game’s soundtrack is equally as integral to the game, featuring tunes that compound the emotive nature of the various situations. There’s haunting songs, frenetic ones as lamenting dirges; the audio spectrum is greatly covered by and large. On the front of aural presentation, the game is fully with Japanese voice-overs and English subtitles; and even though there’s no English acting to be heard, the performances of the Japanese actors convey a great sense of passion, even for those unfamiliar with the language.

By the by, the presentation of Steins;Gate is grade-A, with a clean and aesthetically-pleasing interface. Sadly, the game is only presented in window-mode, which means that those fantastic visuals can only be enjoyed so much. The lack of a full screen option really feels like a missed opportunity, thus making us hopeful for a patch that incorporates this feature. To seemingly make up for this, SG comes equipped with a few extras. There are achievements, tips to unlock as well as a clear list to complete. These extras aren’t game-changers, and they certainly are aplenty, but they do add a little added incentive. 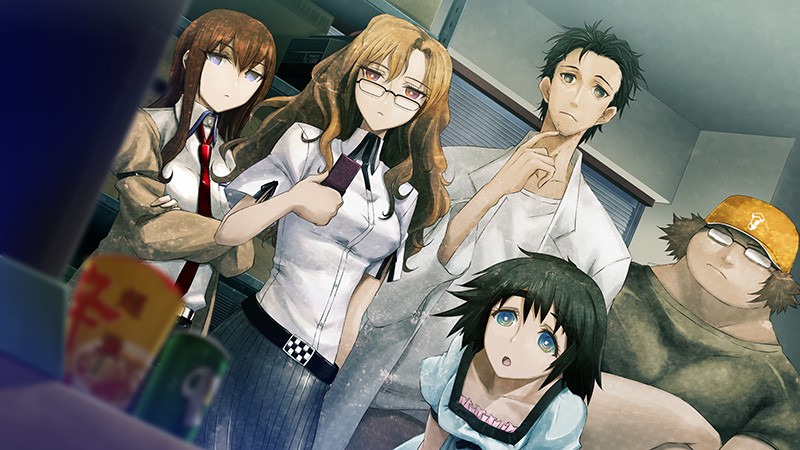 Steins;Gate is one of the best visual novels on the market. This localization has been a long time coming and it’s been worth the four-year wait. The characters are compelling, the presentation values are downright superb and the story is a wild ride of ups, downs, and plenty of weirds. Still, it isn’t without its flaws including its slow start and a few clichéd story moments. Even so, these faults are hardly enough to keep the game from being a crowning achievement in the visual novel arena. If you love the genre, or are looking for a great way to break into it, then look no further — Steins;Gate is the real deal.