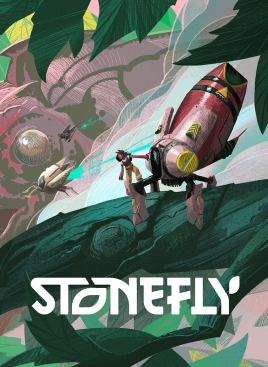 Back in 2019, developers Flight School Studio gave us Creature in the Well, a rather bold and unique attempt at blending dungeon crawlers with pinball mechanics. Not that the indie scene is any stranger to such offbeat hybrids of concepts and/or gameplay genres, but it was still an odd mixture that turned a few heads. It ended up being a success, though, with a nice chunk of good reviews. And now they’re back with another quirky blend in the form of Stonefly, a top-down action/adventure game that blends mech combat, Ferngully and Super Smash Bros. It’s another ambitious concoction, but unfortunately it doesn’t go down as smoothly as you’d hope.

Set in a sci-fi world with miniature people inhabiting a much larger world, Stonefly sees you playing as Annika, a promising young inventor who works on fixing insect-like mechs with their father. Upon needing to run an errand late one night, though, she takes her mother’s out for a ride, but finds it stolen soon afterward. Having disappointed their dad, they now set out to retrieve this heirloom, hooking up with a group of additional pilots known as Acorn Corps along the way. After getting her hooked up with an old junker, Annika has what they need to traverse the wilderness and search for the thief, all while coming into contact with Acorn Corps again and learning about an odd figure who may fit into things…

It’s a simple story, largely focusing on Annika’s time with Acorn Corps, and seeing her appreciate the various adventures and sights they take in along the way while also developing their skills at constructing mechs. It’s an effective one, though, thanks to a cast of likeable characters, a unique miniaturized world with its own various species and quirks (even if the cast is limited), and the feeling of a grand, epic journey, even if the ultimate goal is basically just to journey through forests and marshes and retrieve Dad’s prized vehicle. They just do a good job of telling a nice and fun, classic little adventure, and have an intriguing universe set up. 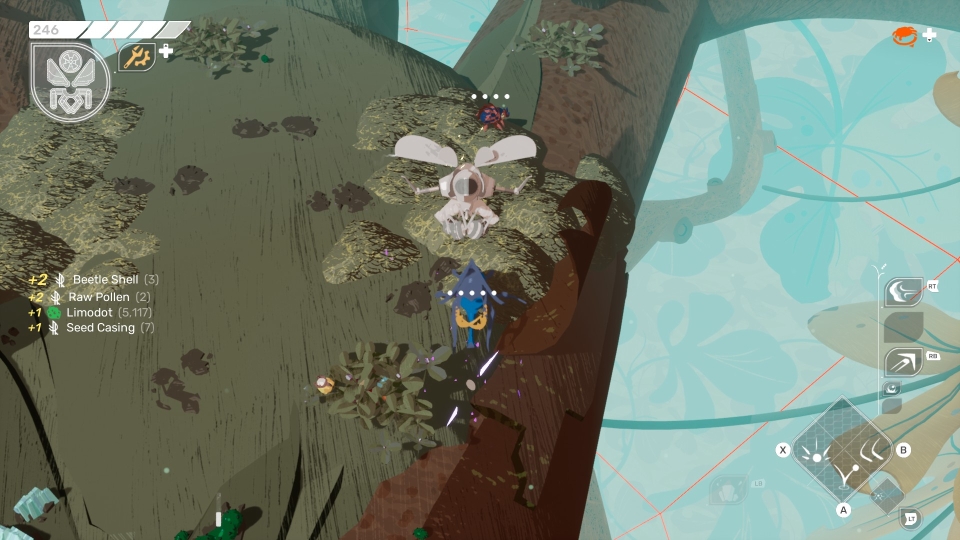 And of course, it helps the the aforementioned miniaturized world is gorgeous. The vibrant style captures each bit of nature perfectly, be it brisk autumn colors seen in groups of leaves, thorny briars that loop across the ground or the various insects that you battle, which are imposing yet gorgeous, decked out in a variety of colors. The soundtrack is also amazing, with perfectly chill electronic tracks that fit the wilderness scene perfectly, especially as you effortlessly glide through the air, soaking in the sights of the vast land before you, seeing all of the foliage from a distance. It all makes for what should be a terrific, modest three-to-four-hour narrative-focused adventure with some light combat. Sadly, that isn’t the game Stonefly wants to be.

In many ways, Stonefly is reminiscent of the recent The Wild at Heart. Both are quirky adventures with unique worlds and characters with jaw-dropping visuals that emphasize the world and nature around them, and both also suffer from an excessive amount of padding, even if they clock in at a shorter time. But while The Wild at Heart’s padding mainly came in the form of an excessive amount of mechanics and features that felt unnecessary and could largely be skipped, Stonefly tries to stretch out its runtime too hard with mandatory bits to the point of annoyance.

The main delivery method of padding in Stonefly is via mineral collecting. There are six different types of minerals to mine for, which can be spent towards customizing your insect mech and adding upgrades to it, either as part of the blueprints Annika think up or payment towards parts that you need. The problem is that at certain times, Annika refuses to advance the story until she installs a certain upgrade. From the sound of that, you may think this is going to be like a metroidvania game, where you need to get something that helps you get past an obstacle in order to access a new area. That, however, happens exactly once in this game. The rest of the time, Annika basically just goes “I really don’t want to leave until I’ve shown the crew the new Slow ability I’ve come up with,” or words to that effect, and you’re not budging until you develop it. And you never need to use it during the mission after. A ton of the upgrades aren’t needed, in fact. 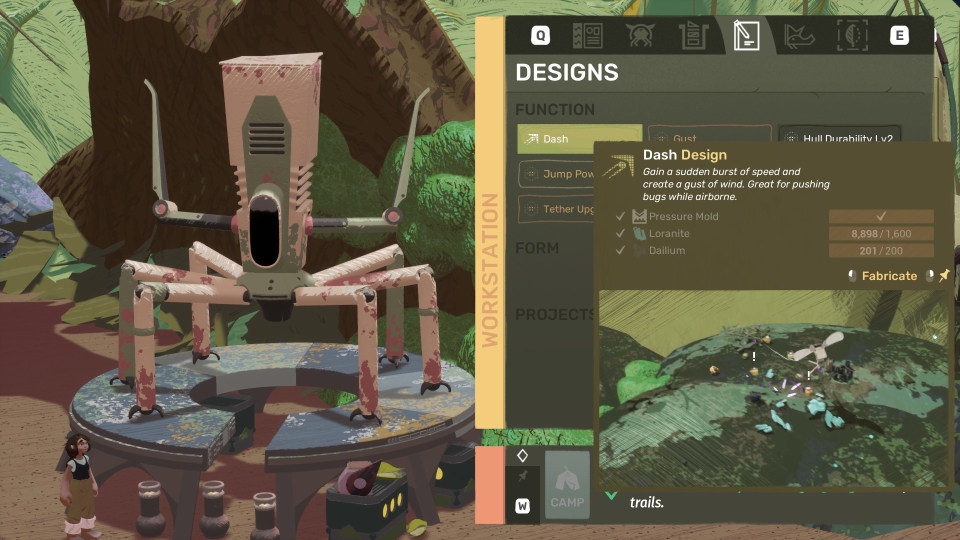 At other points, namely once per act, Acorn Corps needs something that they actually have to raise funds for, requiring you to collect and donate a ton of different minerals in order to advance. It gets particularly groan-worthy after a while, especially when one of these bits actually turns out to be pointless. And how do you get more minerals? Why, by backtracking and grinding, of course! You could look at what minerals are located in which area on the map and search for buried caches there which you can break open, but the game instead encourages you to spend time finding prints to track down Alpha Aphids, which require you to find plants with blue fireflies first if you want additional guides, who can actually drag things out even further when the print locations are seemingly randomized.

The Alpha Aphids are basically giant insects with tons of minerals all over them, with loads of smaller insects also landing and battling you as you mine. You only have a limited time to mine for what you can before the Alpha Aphid goes underground again, all while fending off dozens and dozens of overly-aggressive insects. And that actually leads us to the other major issue that drags down Stonefly: the combat. It’s not particularly bad, as it controls nicely, and I do like the idea of having to stun enemies and then knock them of the edge with a powerful gust, especially during particularly satisfying moments where you can dispose of multiple enemies all at once. Stonefly, however, falls victim to one particularly annoying bit of fake difficulty, that of assuming having tons of enemies all at once is a good substitute for challenge. 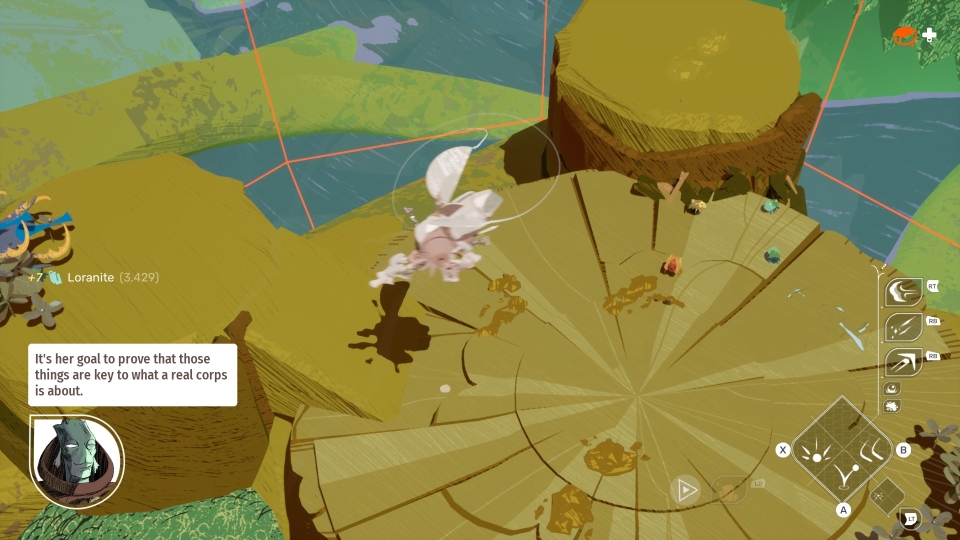 While hordes of enemies can work for, say, a hack-and-slash game, or even a game like this, the key is in the execution and maintaining a proper balance. Here, though, combat just eventually devolves into groups of every enemy type suddenly spawning and going after you all at once. No certain enemies or enemy groups for certain locations, just a constant blend of everything you’ve encountered so far as the game progresses. Sometimes it doesn’t even work properly, because on more than one occasion, I didn’t notice that a minor enemy was stuck on a ledge and just kept spawning tiny insects until I blew it away, allowing for a new wave to finally spawn.

The problem with this is that with so many different enemies attacking at once, I didn’t feel there was enough room to use any of the unique skills I unlocked that were suited for specific enemies. So every skirmish basically just consisted of me getting airborne, spamming the Break button and dropping bombs to stun enemies, then knocking them off the edge. It gets repetitive after a while, and even the game almost feels like would prefer not to have combat: Healing can be done almost infinitely after a relatively small cooldown and you can actually skip a lot of combat sections, save for some mandatory ones that suddenly threw up a grid that throws you back in if you try to leave it, Battlefield-style, because again, padding. There’s not even any in-universe reason for why we suddenly have these, other than “the game says so.” 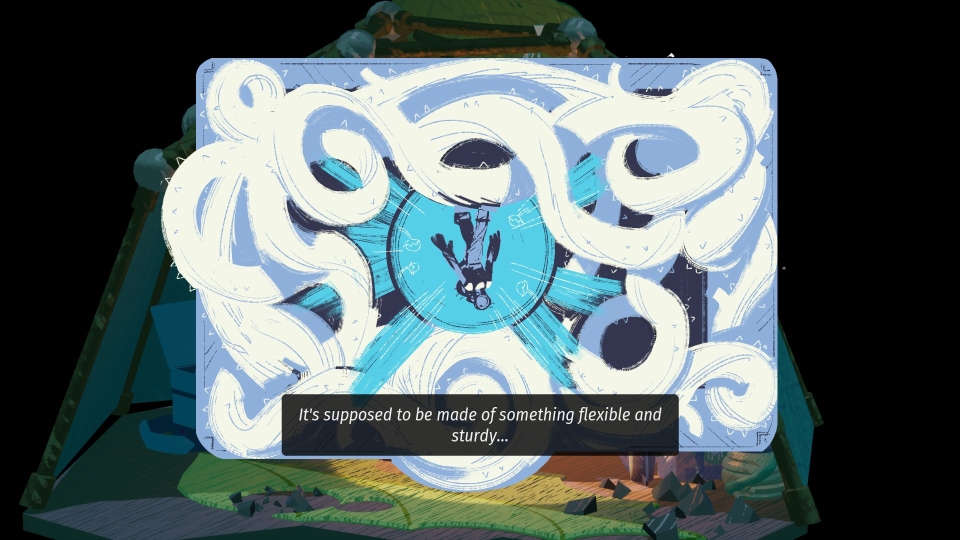 Stonefly had all of the right parts to create an impressive and cool-looking machine, but unlike its heroine, it wasn’t able to fully assemble them properly. The end result is an ambitious journey that has a lot of moments worth checking out, but quickly begins to grow tiresome thanks to overly-repetitive combat, backtracking and grinding. Stonefly is a game with a lot of terrific concepts, but unfortunately undermines them by stretching things out in various ways. Come for the journeys across breathtaking bits of nature, leave when it comes to the combat.