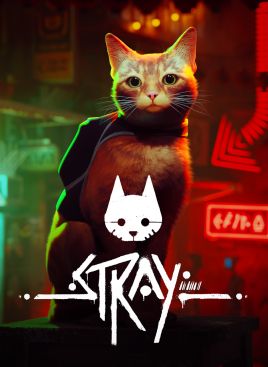 Let’s just get straight to the point here: Stray is a game that features a kitty that can operate a vending machine, as we have previously reported on. As such, a review for a game like this feels rather unnecessary. After all, what are we as a whole supposed to do, not play a game that features a kitty who can operate a vending machine? Absolute lunacy. So the new game from BlueTwelve Studio and Annapurna Interactive gets an immediate recommendation just for that inclusion alone, but I’m told that we are still required to go into greater detail for the purposes of a review. So if you are some sort of monster not convinced of a game’s greatness by its usage alone of a kitty that can operate a vending machine, let us proceed.

Stray is the story of a now-wild cat living in the ruins of a post-apocalyptic universe with their feline family, frolicking among the machinery reclaimed by nature and filled with overgrown greenery. A fateful missed jump one day, however, finds our hero suddenly within a massive underground bunker housing a whole city, and after being guided to an AI assuming the form of a drone called B12, the two set out into a strange new world where humans have gone extinct and have been succeeded by their former maintenance robots, known as Companions. Now they’re on a quest to help our titular stray escape back to the outside world, made more difficult by a seemingly-eternal lockdown. But our adorable hero has their ways and a few notable friends they can make along the way…

This isn’t a story about our cat friend, though, but rather more of a tale of the the land they now find themselves in. One where we learn how the Companions have evolved over time to replicate the behavior of the humans before them in order to pay tribute to them and keep their world intact while having their own unique quirks, one of a resistance group known as the Outsiders trying to finally reach the surface that they believe exists, one of B12’s journey to try and remember anything about their past lives, and more. Much like, say, Mad Max: Fury Road, Stray’s tabby is more of outsider that helps drive the plot along, as we get a view of everything from their perspective. 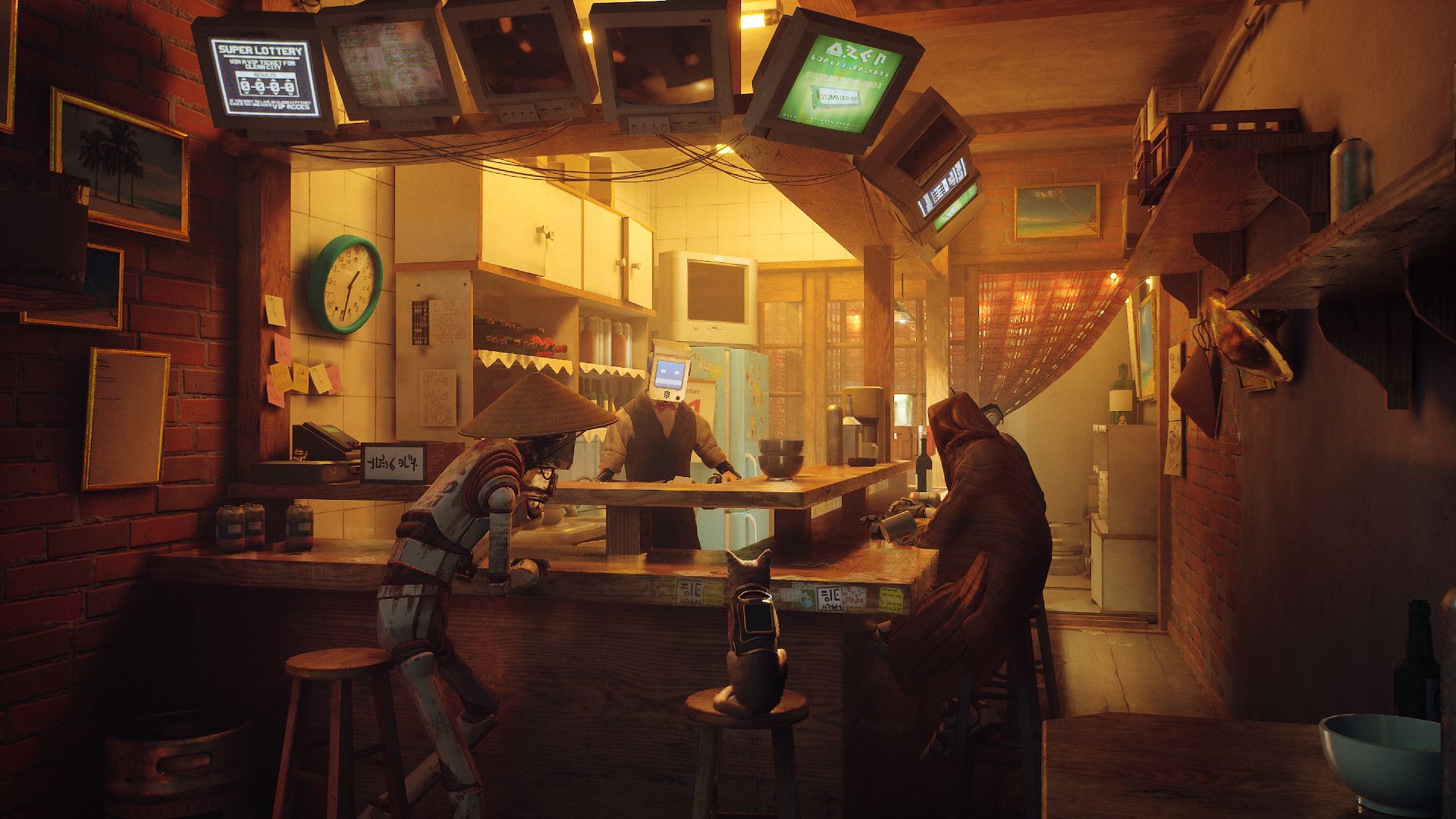 Such an approach works perfectly here, as our kitty’s unique perspective and ability to sneak around, climb and get into certain areas helps give them a nice look into the game’s world as well, one filled with a wide assortment of Companions that have found clever ways to showcase unique personalities that they’ve developed alongside their own language, who all inhabit a neon-filled urban landscape, one where they pretend that the lights at the very top of the bunker are stars, and one filled with several cat-friendly vending machines. It’s a game of exploration and interaction, where you learn more just by being a cute cat that Companions open up to (with translating assistance from B12). It’s a terrific story with profound themes to uncover and great emotional beats along the way.

During the moment with the Companions, Stray most resembles a traditional adventure game, where you search for certain items that B12 can tuck away after digitizing them, and where you then have to find who to give them to or where to use theme. It’s simple stuff, but what elevates things are the catlike movements and behaviors used when getting around in order to obtain what’s needed. With a simple prompt, our tabby can leap onto any open air conditioner, pipe, box, etc above or below them, and climbing around is a joy, done with the greatest of ease and executed in such a way that it never gets old, as you seamlessly hope from platform to platform, crossing entire buildings and the like in the blink of an eye. And sometimes it comes into play for even more detailed puzzles, like figuring out how to disable security cameras, which are always welcome.

A lot of the joy in Stray, however, comes from the moment where you’re just able to be a regular cat. There’s the ability to just leap around and knock stuff off shelves, of course, but there are also areas where you can scratch doors and furniture, nuzzle up against the legs of various Companions, drink from pools of water or even take little cat naps in cozy hideaways, providing rather adorable sights. Does it contribute anything to the plot? Not really, but who cares? The point is to emphasize that you are indeed playing as an average cat with their own unique needs and desires, and in that area, the game succeeds (having a ton of gorgeous, fluid animation helps as well). Of course, if you want more to do, there are hidden memories to find for B12 and some other sidequests, rewarding our kitty with cute badges for their harness. 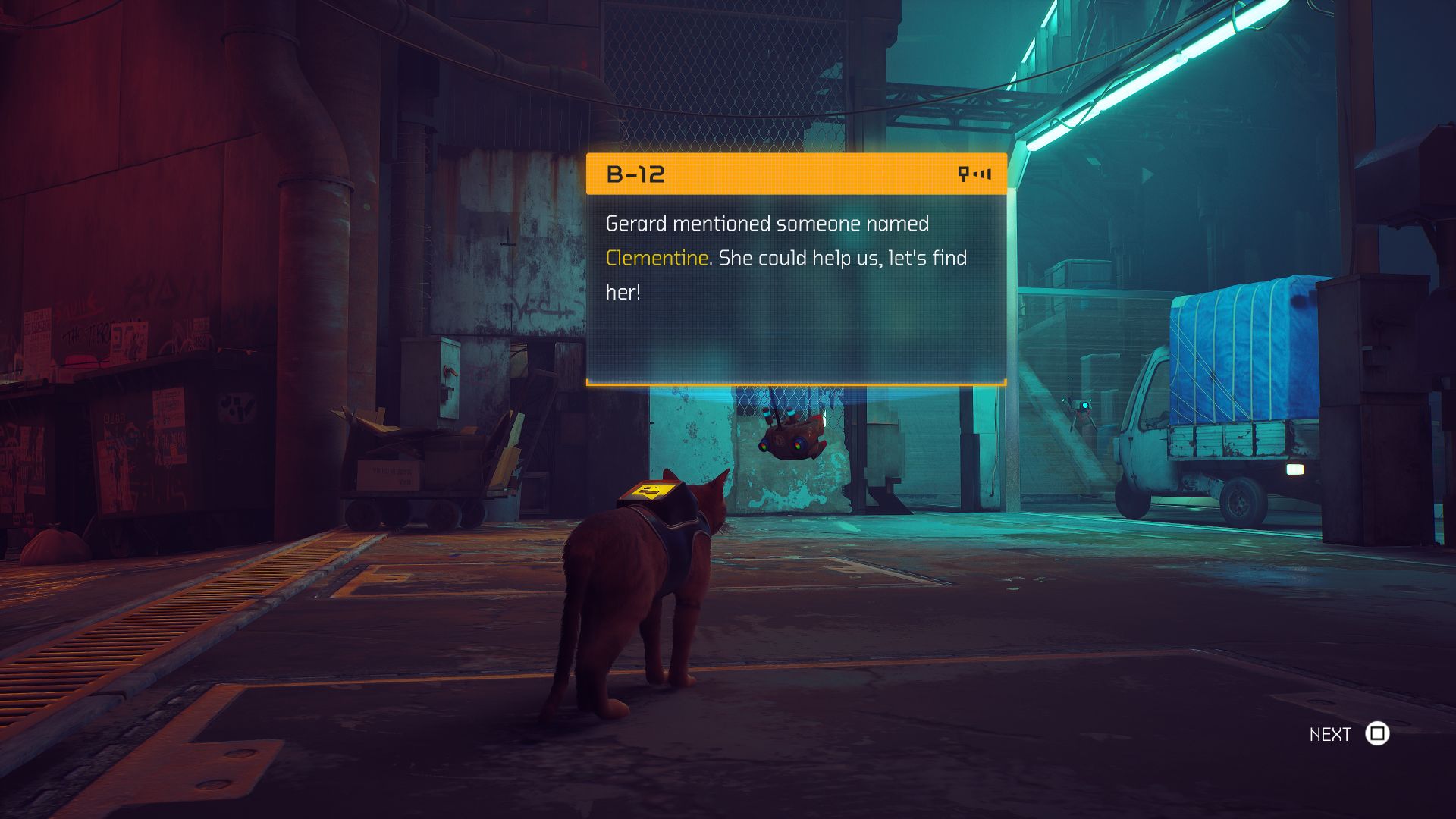 The journey in Stray isn’t all nuzzling up to Companions and ordering energy drinks with tiny paws, though. One of the other things that’s replaced humans in this city is the Zurks, bizarre creature-like organisms that feed on flesh (and metal) and attack in swarms, and this is where the more action-packed areas kick in as you try to avoid them, either by running away from them, luring them into traps with meows (yes, there’s a dedicated meow button) or fighting them off with weapons that B12 can equip later on. These are easily some of the most tense and exciting moments, with a particular rooftop scramble while waiting for an elevator being a particular highlight. And they’re just as well-executed as the more adventure-focused bits in terms of gameplay and movement, and shake things up as more stealth-focused sections appear later on as well.

These bits are also where the game takes a surprisingly effective detour into horror as well, particularly when it comes to visuals as the more meatier bits of Zurk nests emerge, culminating in…well, I won’t spoil anything. Of course, the visuals in Stray are stunning all around, so much so that you’ll probably want to apologize to your screenshot capture button in advance over how much you’re about to wreck it. Every inch of the slums, villages or abandoned areas is filled with detail and teeming with life in one way or another, be it the calming monitor faces of the companions, the scenery that tells a story, or the previously-mentioned dead-on accurate animations of our feline lead. 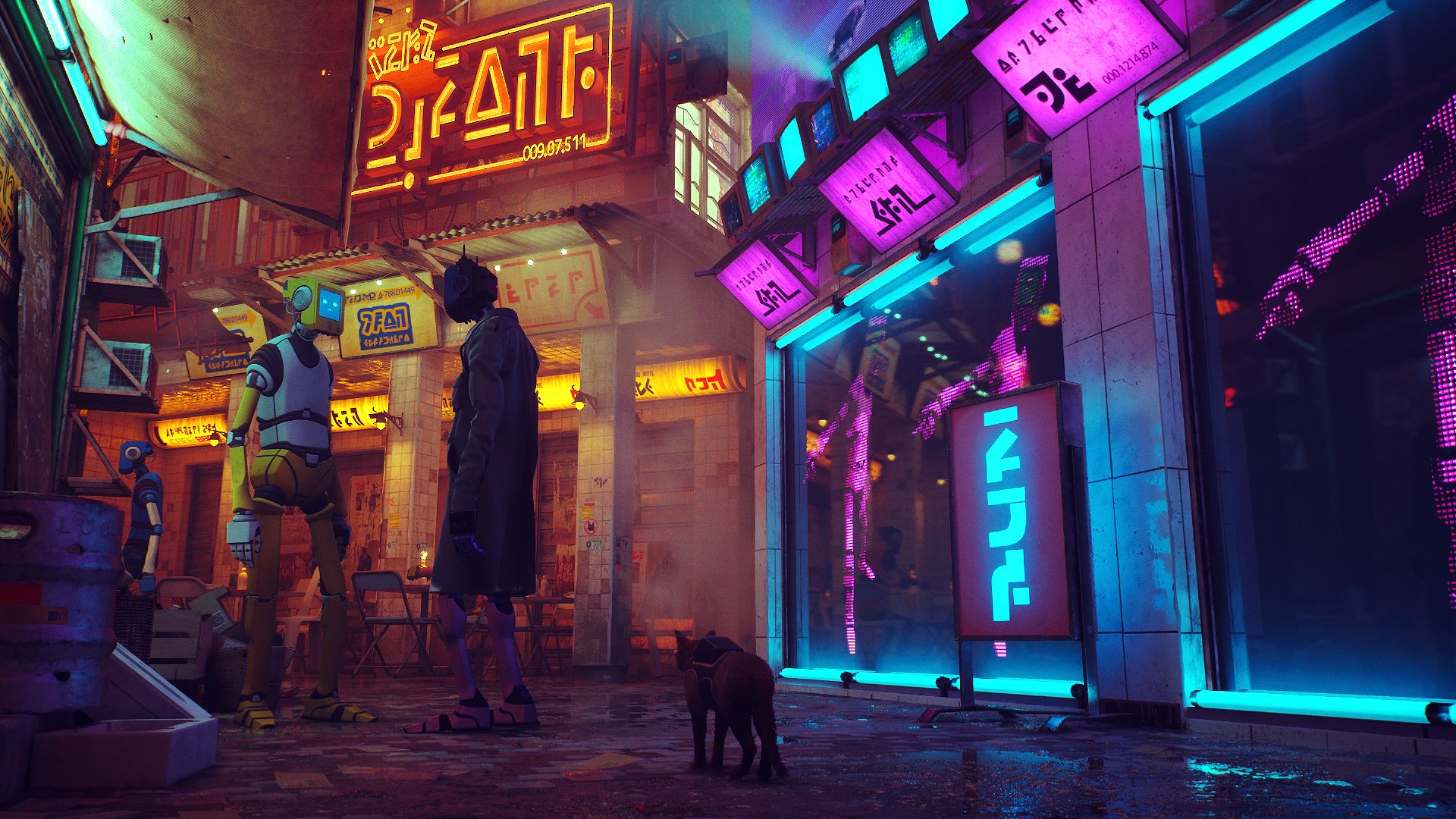 Special mention goes to the lighting, as Stray may easily have some of the year’s best lighting effects. That may be a particular part of visuals that you never focus on much, but the underground city’s reliance on neon creates a dazzling blend of colors, helping to highlight certain areas as you explore them, with the the more deserted areas providing an effective contrast. The atmospheric soundtrack is also a delight as well, be it chill tracks as you lie down for a snooze, calming tunes by a street musician after bringing them new sheet music, or the clunk of a vending machine as it serves up another drink that your feline self successfully received.

If there’s a particular weakness to be had with Stray, it’s that it suffers from the same problem a game such as Grim Fandango had, where the latter half of the game, while still a delight, seems relatively weaker compared to its first half. Without trying to go into many spoilers, one of the game’s earlier threats essentially gets replaced and the new foes don’t put up as big of a challenge (to the point where the final moments are an anticlimax gameplay-wise), and compared to the numerous paths and open vertical areas of the slums, the later cities are a slight downgrade when it comes to exploration. Also, while later areas still contain vending machines, only the slums contain ones that can be operated by the kitty, as it’s the only time they’re vital to any objectives. Heartbreaking, I know, but not a total dealbreaker. 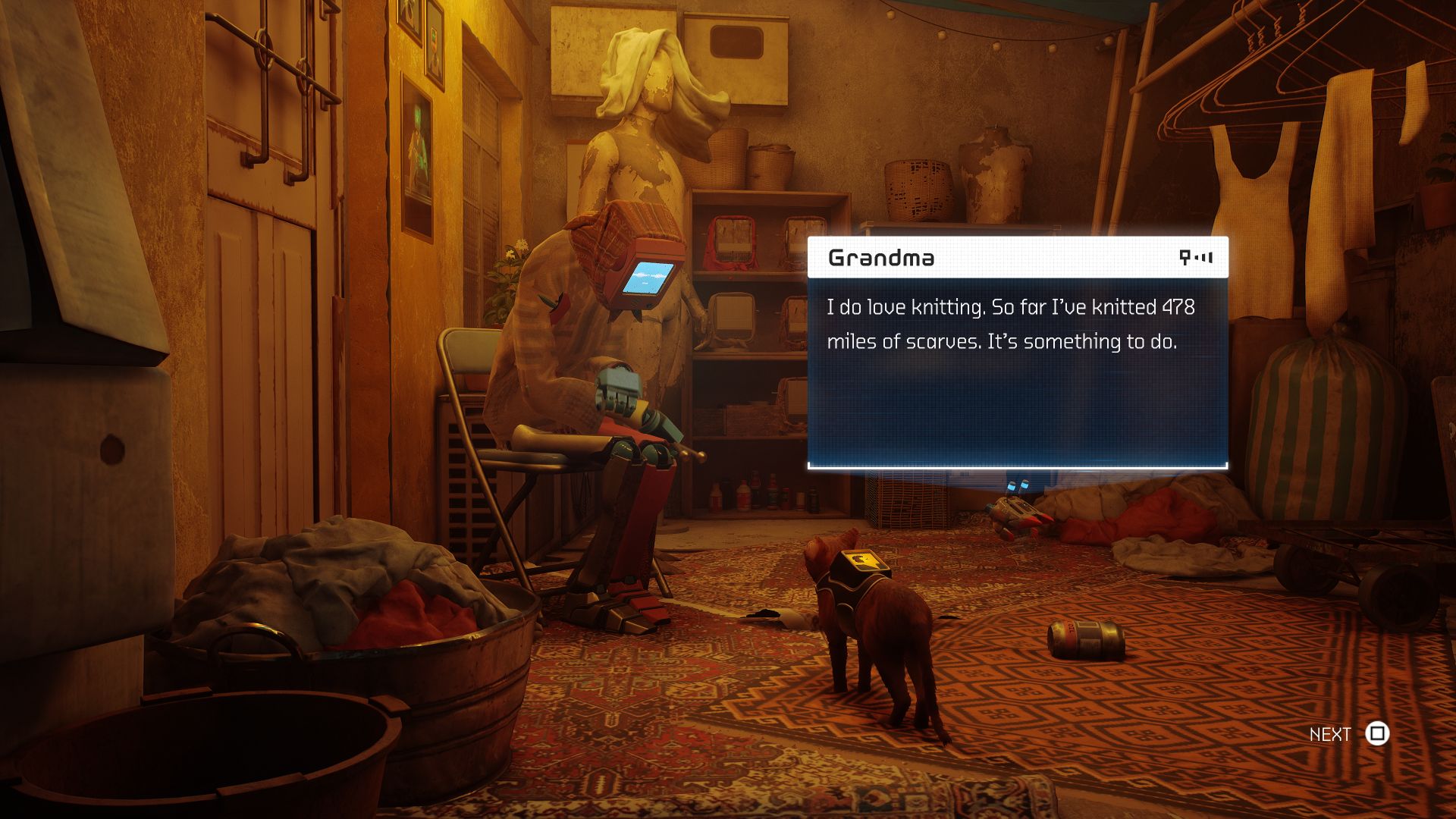 Looking past the amazement of the fact that it features a kitty that can operate a vending machine, Stray boasts drop-dead gorgeous graphics, an intriguing story and unique post-apocalyptic world, and ridiculously fun and silky smooth gameplay that comes from climbing up and down every area possible with natural catlike agility. Stray is an absolute masterpiece that BlueTwelve should be proud of, and you’d be a fool to miss out on no matter what, so make sure to check out this feline odyssey ASAP.