In a world where serious and ultra-realistic shooters are taking over, Insomniac Games have broken away from the norm to develop something with a heavy emphasis on fun. The Ratchet & Clank developer have gone back to their comical roots, creating an over-the-top, highly stylized shooter that will no doubt grab anyone’s attention. With tons of referential material to TV, movies and other games, Sunset Overdrive is aiming for your funny bone, but at the same time, creating some of the most satisfying mechanics out there, both in traversal and combat. Throw in a creative arsenal at your disposal in a fully customizable experience and the awesome-apocalypse is looking to be one to remember.

Sunset Overdrive is packed to the brim with comedy. It’s an over the top shooter that consistently breaks the fourth wall with various references to other properties like Breaking Bad, Game of Thrones and even gaming websites such as GameFAQs. Heck, at one point during a mission, the protagonist will jump out of a letterboxed screen, grab his style bar, and strike an enemy with it. It certainly helps that the main hero or heroine is fully customizable, from what type of clothing they wear to even changing their sex mid-game. Having a giant bald man wear a skirt and makeup, or a tatted up woman in samurai gear jumping across Sunset City is oddly comical. This is all contributed to the well-written script. While the story itself is nothing spectacular, and actually drags near the end, the clever dialogue from the protagonist, who constantly cracks wise to the semi-serious supporting cast, will have players in stitches. It’s definitely not for everyone because of how juvenile is can be at times, but the awesome-apocalypse is meant to be a lighthearted, fun place and not treated as a dark and dreary setting. 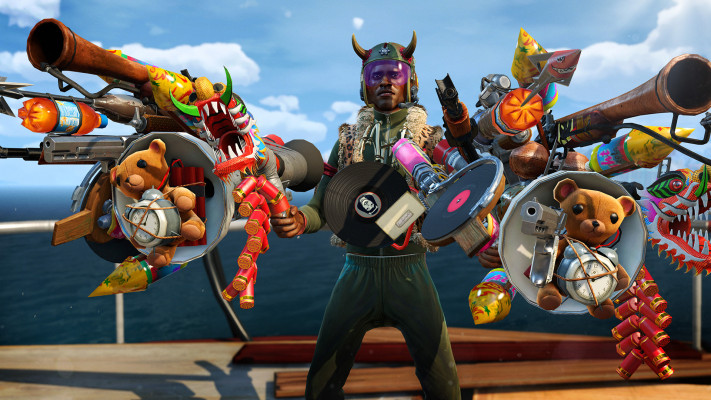 Traversal is a significant part to what makes Sunset Overdrive fun. At first, it can feel clunky as there’s a lot of mechanics at play, but once accustomed to it, and newer abilities are introduced, it becomes especially satisfying. For all intents and purposes, this is a comic book superhero game. The protagonist will be jumping off cars to incredible heights, grinding on power lines and wall running on every solid object. Sunset Overdrive defies all physics, but in doing so creates a way to maneuver through the city in an almost Crackdown fashion. It certainly helps that Sunset City is just packed with collectables and unlockable challenges, so even if there is a fast travel system, players will find themselves grinding and bouncing more often than not. Insomniac has even found a way to handle swimming, having the protagonist skid across the water in a rather ridiculous way instead. While the world we are presented with isn’t the biggest, it’s one of the densest, containing so much to do with little breathing room in between.

Combat also ties right into traversal. Grinding and bouncing off everything in the environment is the only way to fight. This is not a cover-based shooter or even one that’s about running around on the ground mindlessly. For whatever reason, Scabs and robots have incredible accuracy and will do massive damage within a matter of seconds if this attempted, so it comes down to constantly moving through the environment. If the player sticks to this pattern, this won’t be a difficult experience, but it’s still encouraged to die. There are various creative respawn animations that can be seen, from a space ship dropping the protagonist off, to emerging from a sarcophagus. It helps that, outside of boss fights, there’s no real penalty for biting the dust. Speaking of boss fights, there are four throughout the campaign, and each one is spectacular. While decimating thousands of OD, Scabs and Robots in various ways can be entertaining, it’s these specific boss scenarios that really bring out the best in Sunset Overdrive, creating high octane spectacles. It’s an absolute shame there weren’t more of them as they become memorable moments in an already over-the-top, delightful campaign. With that said, for the first half of the story, the side missions are mainly fetch quests, which will wear on anyone quickly. It’s only the later missions that things become to vary, giving the player some rather comical, yet fun activities to do. 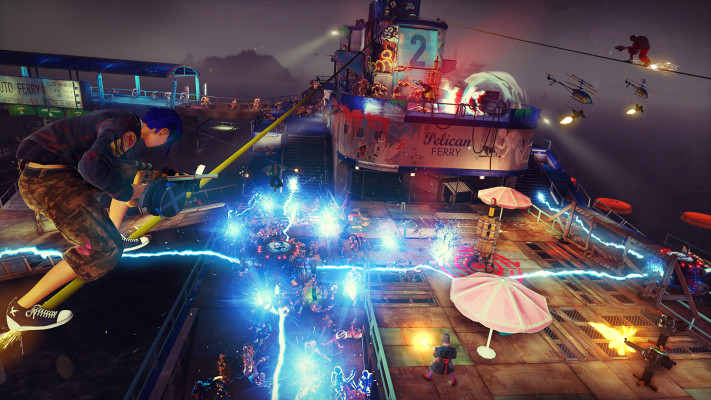 This all comes from a company well known for their creative arsenal and that doesn’t change here. There are various unique weapons that can be obtained through story progress and a shop, but it’s how they’re used that impacts combat. Oddly enough, even though there’s a wide variety of unique guns, there are a couple out of place and too generic for this world. Thankfully, the rest make up for that as there are Fizzle launchers that will melt your skin off, high frequency vinyl blasters, electrical laser rifles and so much more. The only disappointing part is cycling through the large arsenal as combat needs to be halted for a couple seconds to bring up a weapon dial. There is the standard cycle to the next gun individually, but that’s not ideal and takes far too long when there are eight available. There are also special “Amps” that can be equipped to both the character and weapons, giving them boosts in power and special traits. For example, at a certain style level obtained by grinding, bouncing and killing, a drop slam may generate an area for healing, unleash fiery pillars or more. This may seem like a simplistic game from the outset, but there are deep systems at play, helping better customize the experience towards the player.

Most modern games now add multiplayer where they don’t need it, but Sunset Overdrive is a fine example of how it’s done right. Instead of throwing in some half-assed competitive multiplayer mode, Insomniac has crafted a cooperative, yet semi-competitive online component that really drives home what this game is all about: mayhem. Instead of having to traverse a network of menus to get into multiplayer, a Chaos station will need to be found somewhere in the environment. While this does sound like a bother, not only are these stations scattered about well, but during the search for a session, the player can then exit out and free roam while it’s processing. The concept is simple: there are roughly twenty minutes worth of activities that need to be overcome as a group, whether it’s collecting a certain item while the ground is boiling lava, or collecting points to rack up the highest value. There’s a strong variety of activities to partake in, and depending on which part of the city the session takes place in, there will be different ones to choose/vote for. 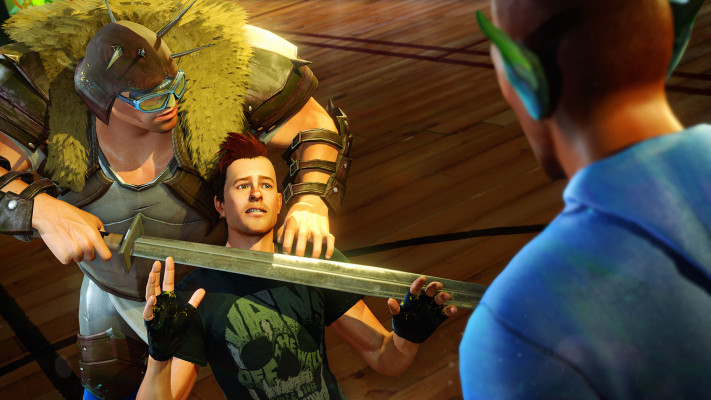 After completing the four activities, the upwards of eight players will be putted to against waves of OD, similar to what is done in the main campaign. This is where the third-person tower defense mini-game comes into play as traps need to be set and the multiple vials of VAT need to be protected for a certain amount of time. At the end, each individual will be rewarded with a score that not only ties into kills, but whether specific challenges during activities were completed. If they’re able to protect the VAT from those nasty OD freaks, an insane multiplier will be given, boosting the score drastically. This all amounts to more spins on a wheel, generating Overcharge, cash and even clothing that can’t be found anywhere else. All and all, it’s surprising how diverse this cooperative experience is. Insomniac could have easily just thrown in some half-baked multiplayer mode, but they created something more compelling that, and if it had a better loot system, more people would likely sink a lot of time into. It still would have been far more beneficial to include full cooperative play in the single player campaign, roaming the city and doing all sorts of activities together, but this is a fine substitute.

Visually, Sunset Overdrive can look absolutely beautiful. Everything that comes in this package is overly stylized, from mini-nuclear explosions going off to bodies exploding in dazzling fashion. The world itself is shockingly dense and diverse, containing brightly colored architecture that’s specific to a section of the city. This includes eastern structures in Little Tokyo, a grittier industrial district and a more modern, futuristic downtown.  It’s not just that the world is full of vibrant colors, but the various visual effects, from fireworks to Poppers bursting, allow the game to shine. This is one of the first open world titles in a while where the world actually looks sensational when the sun is shining, but without a day-night cycle, it’s difficult to compare. With tens of enemies on screen at once, the frame rate also holds up quite nicely, but during multiplayer it can take a hit, notably when characters are using special effect heavy weapons. It’s also surprising that Sunset Overdrive is rated Mature, especially considering how fairly tame the violence is. Vulgarity is set at random, and can even be censored in the menus, but the only real bloodshed seems to come when Scabs dissipate into clouds of red. As great as it is that Insomniac Games doesn’t censor themselves, they barely touch that rating and could have benefited from going down to Teen. Regardless, Sunset Overdrive is a visually pleasing experience that has a strong variety. 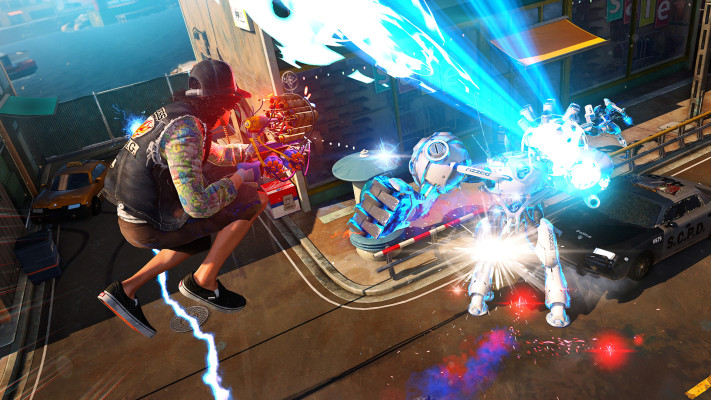 There are few games like Sunset Overdrive. It’s a comical, highly diverse shooter that has a strong focus on being fun rather than realistic. While the fetch quests are overly aggressive and the music will occasionally cut out at the oddest of times, there’s still a lot here to love. A well-written script chock-full of fourth wall breaking references, some of the best traversal mechanics available, colorful visuals and a dense world to explore, players will be immersed in this awesome-apocalypse. It’s a shame the campaign doesn’t support full cooperative play, though, as it feels like it could have excelled with it, but the multiplayer component ensures for a decent substitution. All in all, Sunset Overdrive is a breath of fresh air in a stagnant, overpopulated marketplace of gritty shooters.